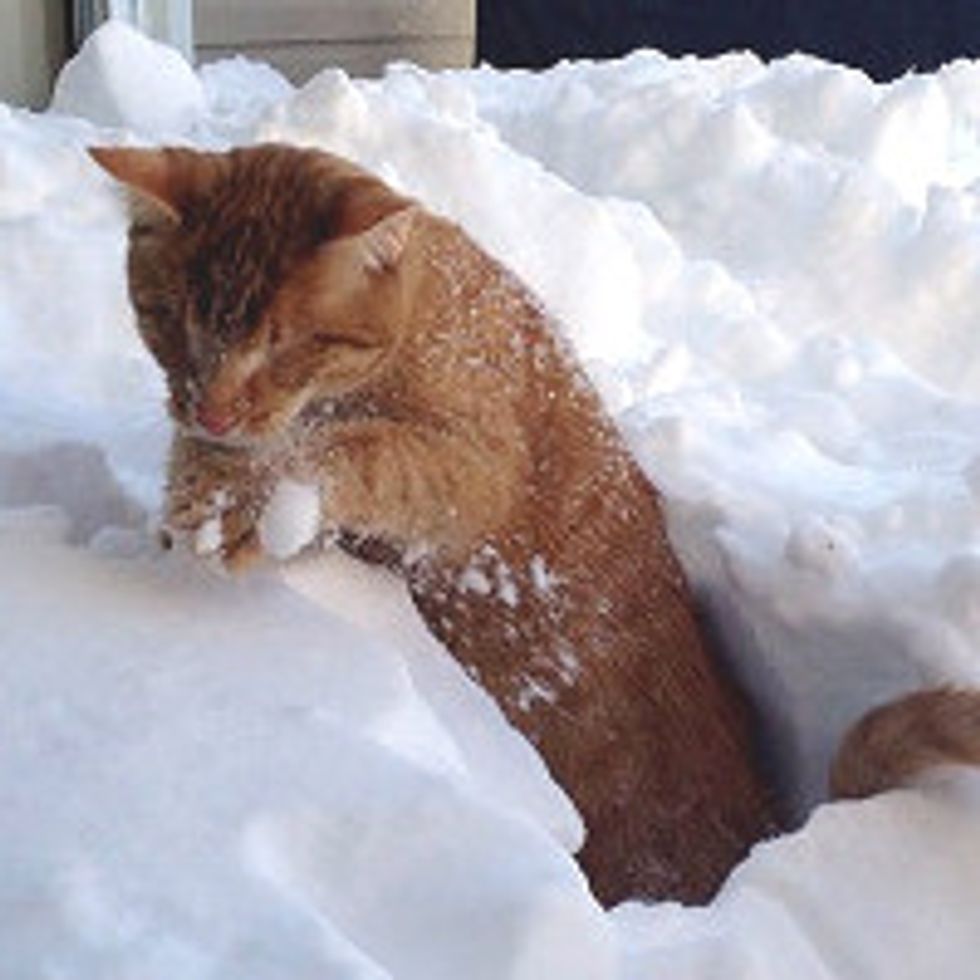 When Sprite was a little kitten, a rescue group gave up on him because he is blind. But, given a second chance by a kind person, today he just played in 2 feet of snow in pure bliss.

Sprite was born in a feral colony and was taken to an animal hospital when he was still a kitten but infected with severe feline herpes virus. "it's not uncommon for kittens to produce so much infectious eye secretion that their eye(s) seal shut. Everything can build up until the eye ruptures…. When a rescue organization found out he'd lose his eyesight, they opted for euthanasia because he'd be 'too hard' of an adoption," said reddit user raella who gave Sprite a second chance at life and started fostering him.

"He's really like any other cat most of the time! Just bumps into things here and there. He catches house flies and once I saw him go after a tiny fruit fly. I still cannot process how he heard something that tiny. He memorizes his surroundings, it's pretty neat. He uses all his senses - whiskers especially… He's never hurt himself though, even when he runs around every night chasing imaginary things," raella added.

Sprite continues to amaze his family the longer he stays there. He's bonded with all the furry animals in the house, dogs and a cat, and even follows his humans and the cat around. "Once I forgot my flashlight (aka smartphone) and made my way across the bedroom in the dark by following Sprite. I got lucky as he headed straight for the bed."

"Sprite's actually pretty independent, but is also extremely attached to me and thrives on his connection with me. If he's scared, all I have to do is call him, and his tail pops up and he comes running over. He's an incredibly responsive cat."

This ginger wonder cat lives his life to the fullest and is always happy for the simplest things around him. "He's the second animal that I fostered and decided to keep. I"m not allowed to foster any more," raella said.

With a second chance at life, Sprite has defied what other people may think about him. He doesn't see his blindness as a disability, but rather it's what makes him unique and special.

After he was rescued. He was unwanted by a shelter, but a kind person took him in and gave him a second chance at life.

can't see but it doesn't stop him

He does what other cats do

and even bonds with the dogs

He loves furry friends and always stays close with them