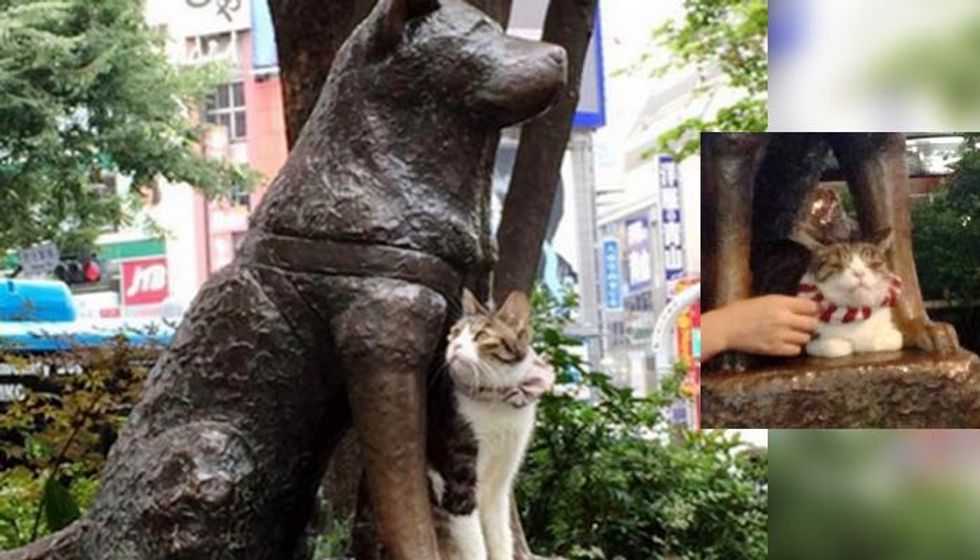 Cat Spotted Hanging out with Hachiko the Faithful Dog, Enjoying Each Other's Company

A cat has been spotted hanging out at the famous Hachiko statue of the legendary faithful dog in Japan, keeping the immortalized canine company.

Hachiko the most beloved dog in Japan now has a new kitty companion who sometimes pays a visit at his statue, a famous landmark located outside Tokyo's Shibuya Station. The cat would stand under its canine friend or nap between his paws while crowds of passengers walk by. (Another beloved animal in Japan Tama and her successor Nitama)

This well-groomed and well-fed kitty has been seen numerous times and seems to really enjoy Hachiko's company. The cat doesn't look like a stray and seems to belong to someone.

There is seating around the statue, but Hachiko is where the kitty wants to be.

Hachiko's new feline friend has attracted many people who take pictures of this special occasion. The cat isn't bothered by all the attention at all and keeps napping or doing whatever the kitty pleases.

Many people have shared their encounters with Hachiko's kitty pal on twitter.

"Also noticeable in the tweets is that the cat appears to hang out by the statue in the earlier half of the day when there are fewer people around," Rocketnews24 reported.

Watch the kitty in this video:

Hachiko now has a faithful friend himself.

They really enjoy each other's company.

Time for a nap.