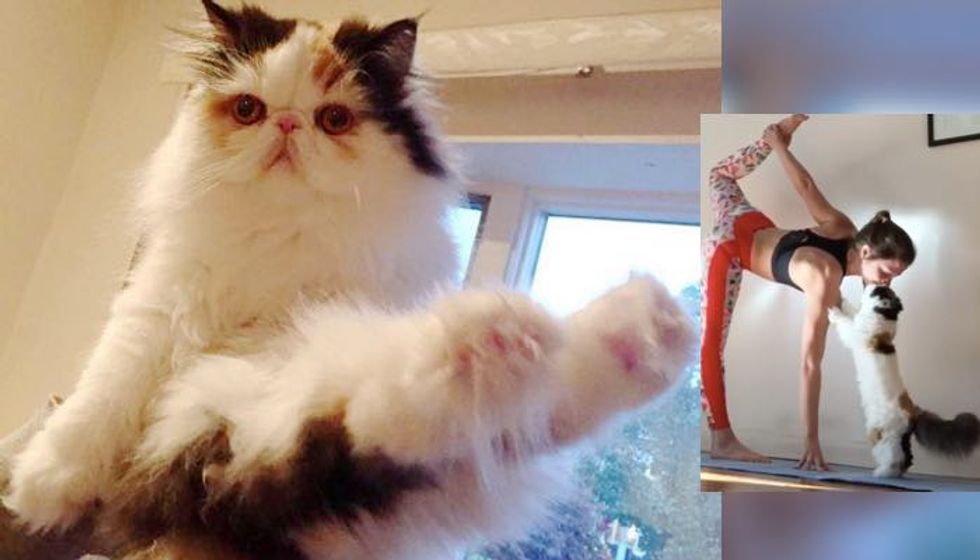 Cat Stands Up on Two Paws to Give Human a Kiss as Her Fluffiest Coach!

This beautiful fluffy cat stands up on her two hind paws and stretches tall to give her mom a kiss. It just doesn't get any cuter than that!

Courtesy of Karin. Scroll down for video!

"My cat's name is Graveskull - my husband and I named her after he-man (the old cartoon from the 80's) and thought it would be hilarious to give our cat a cool name like that. So when we got our baby girl we knew she was Graveskull. The sweetest little kitty but also has a feisty side. She is 3 years old," Karin told Love Meow.

This fluffy calico cat loves to nose boop her human mom and smell her face when she's in the middle of a workout. She's either trying to encourage her mom to keep going or distracting her with her cuteness.

She and her buddy Tacos the dog watch over the well-being of their humans by keeping them company and giving them endless supply of love. "My babies are always with me wherever I go and whatever I do," Karin said.

When she came to her new home, she was just a ball of fur.

Now all grown up and fluffier than ever!

Look at those fluffy paws!

She is her mom's best coach and the greatest companion!

Watch video: Graveskull stands up on her two paws to kiss her mama.

There's nothing she likes more than cuddling with her humans.