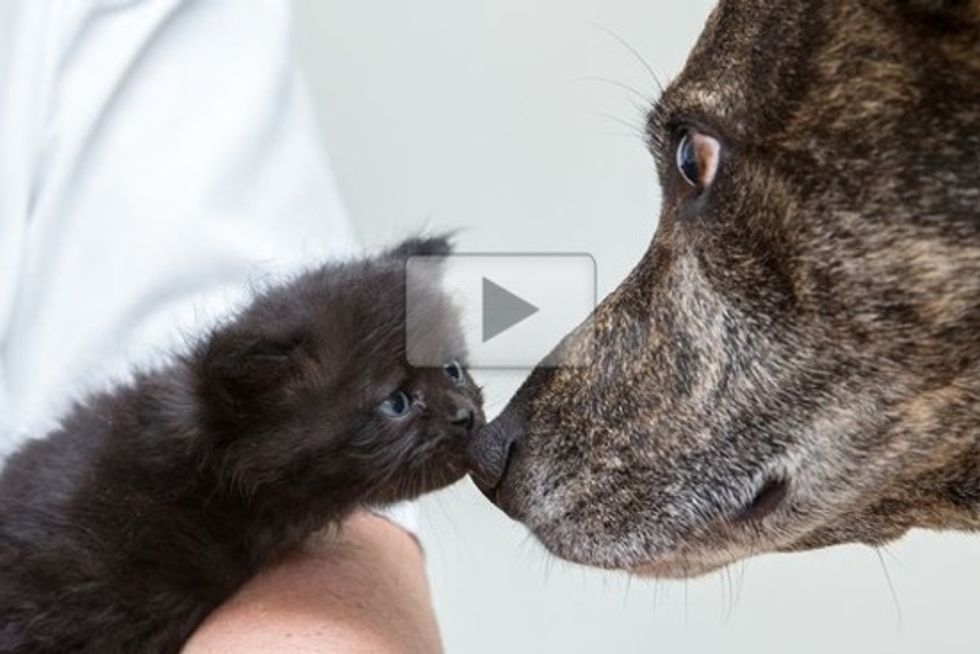 Meg the 3-legged rescue dog became a surrogate mom to a litter of five kittens that he helped rescue from the ceiling of the Rochdale’s RSPCA animal center.

Meg who lost one of his legs after being rescued and was adopted by the center manager Jean Spencer, often accompanies her owner to work.

Last Wednesday evening, Meg was looking up at the ceiling and started whimpering as if she wanted to tell Jean that something was up there.

Jean began to investigate. When they found out that there were kittens trapped in the building’s plasterboard ceiling, they began to break it open. After hours of hard work, they made a huge hole in the ceiling where they found five kittens and brought them to safety.

"It was really unusual rescue. I know Meg and she was obviously worried about something in the ceiling so I thought I’d better have a look and it was a good thing I did. There was only a space in the ceiling cavity of about eight inches, so we had to make a big hole in the ceiling and work through the night to get them out. We think the kittens’ mom must have sneaked in through the roof to have them," Spencer said via ITV.

The center believes that they have the kittens’ mother as they have caught a female cat that just gave birth outside the center. But the suspected mama cat will not look after her babies, so everyone at the center and the volunteers are working together to care for the kittens. Meg the 3-legged dog has been a great helper too.

"Meg is really fond of the kittens. She is really kind and gentle with them and is always licking them, it is very sweet to see," Jean added.