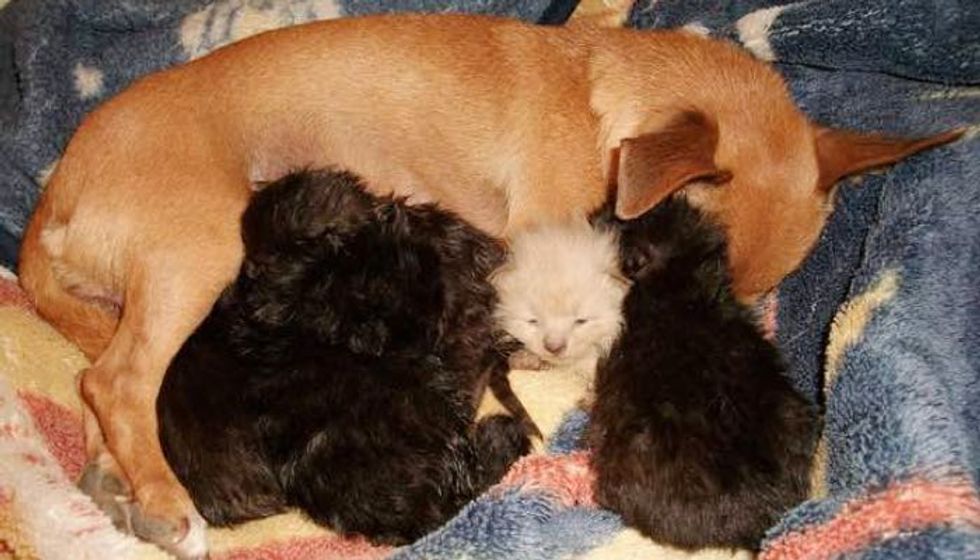 Dog Mama Lost Her Only Puppy, Takes in Five Orphan Kittens as Her Own

A dog mom lost her only puppy and was saddened by the tragedy, but she turned around when five orphan kittens came to her, meowing for some very needed motherly love.

The acceptance was instant and the love was immediate.

Penny the Chihuahua who lost her only puppy adopts five orphan kittens. Photo by Jeff and Dale.

After Penny the Chihuahua gave birth to a single stillborn puppy, she was heartbroken. "She pretty much cried all night and needed to stay with somebody and you could see the tears, literally she had tears coming down her eyes," Fulk added. (More info: WHSV.com)

Photo by Jeff and Dale

They contacted Cats Cradle in Harrisonburg, Virginia the next day. "Jeff called us with grave concern for his dog because of how upset she was and asked if we had any newborn kittens who needed a mother to suckle on," the rescue shared the story via Facebook.

"It turned out we did! Jeff and Dale became official fosters for us and picked up the kittens, who bonded immediately with Penny, whose grief has been overcome with happiness!"

"It gave her what she was looking for; it was almost immediate that she turned around 100 percent," Jeffery Mullins said.

They told Cats Cradle: "(Penny) took all of them and couldn't be any happier! ...she has only left her babies to get water, use the bathroom and a quick snack... then it's right back!"

Photo by Jeff and Dale.

"It's gratifying to see, because it shows that you know humans aren't the only ones with compassion. Other animals have it. Dogs have it. Cats have it," said Matt Chan of Cats Cradle.