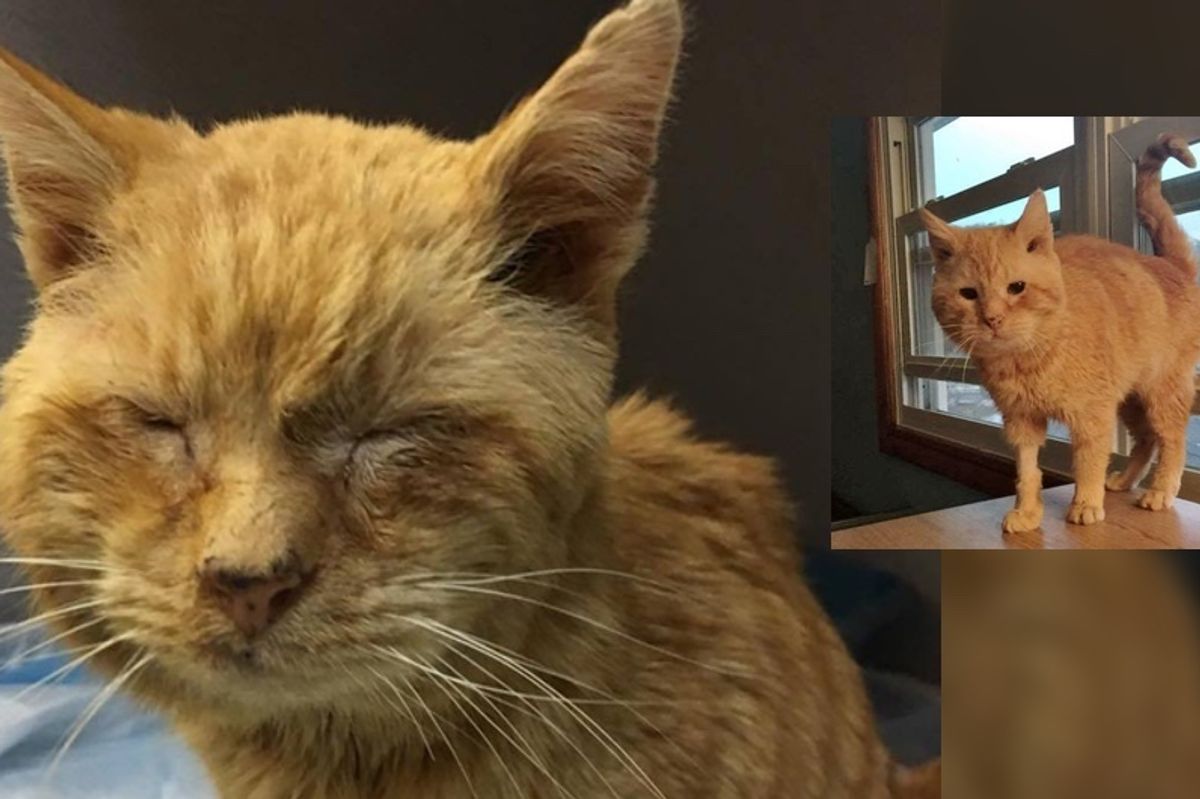 Elderly Stray Cat Can’t Stop Chirping with Joy After Being Saved From the Brink Half Frozen...

An elderly stray cat was found outside half frozen. Rescuers brought him back from the brink, and he was so thankful that he couldn't stop purring. 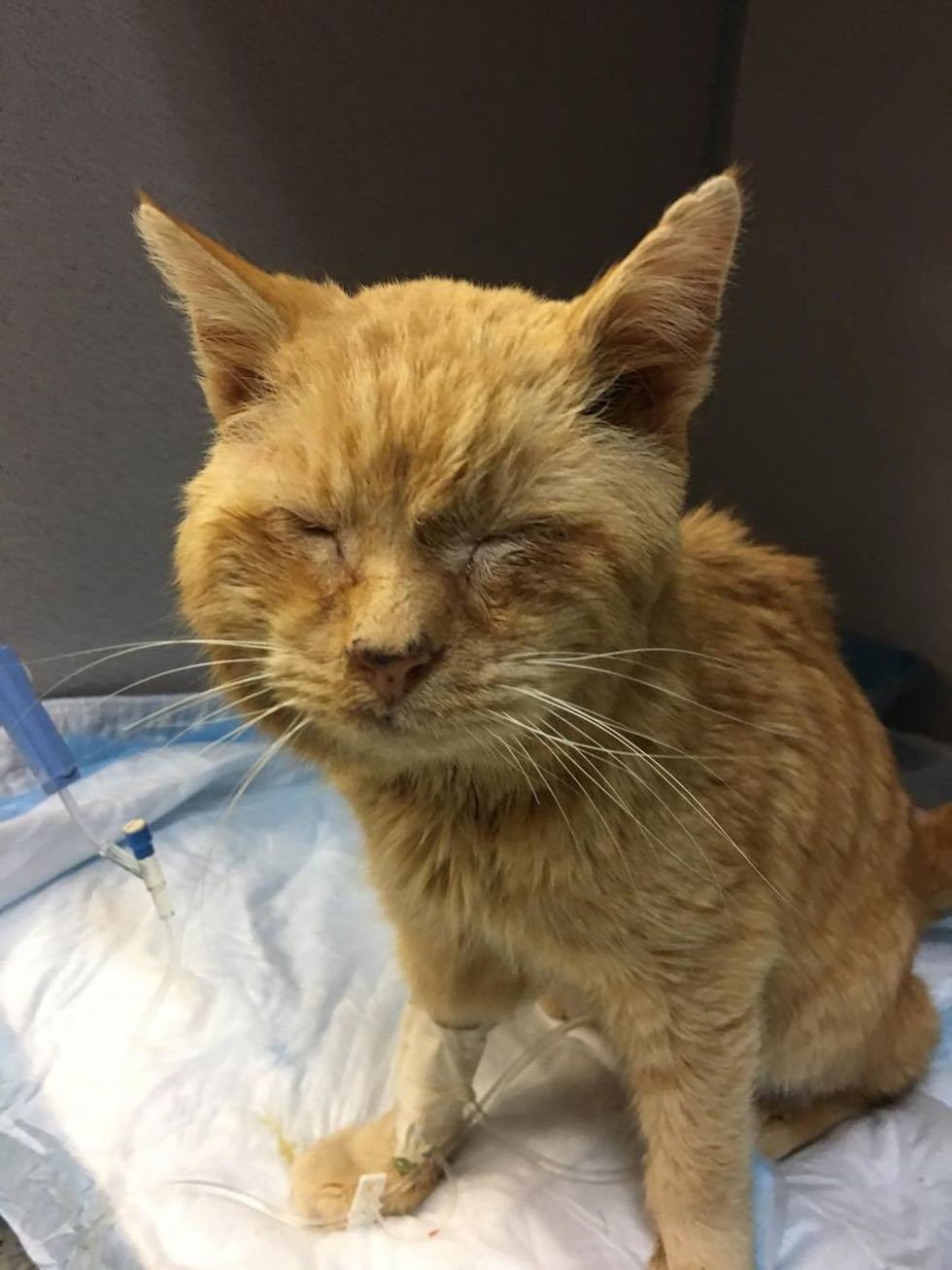 One evening in early January, Itty Bitty Kitty Committee, a rescue group in Charleston, West Virginia, received a message from Eva of B.A.R.C. Boone Animal Rescue Coalition about a ginger cat that was found "half frozen".

"Eva only contacts me about the kitties that truly need more than they have to offer so I knew (before I even saw a photo) that this kitty needed help now," Dorella Tuckwiller, founder of IBKC shares with Love Meow.

A kind lady, Nikki, transported the ginger boy to the vet's office. As soon as he arrived, he was wrapped in a blanket and smothered with love. The sweet kitty immediately started purring from a single gentle touch. He barely had enough strength to open his eyes, but he kept purring and wanting more love. 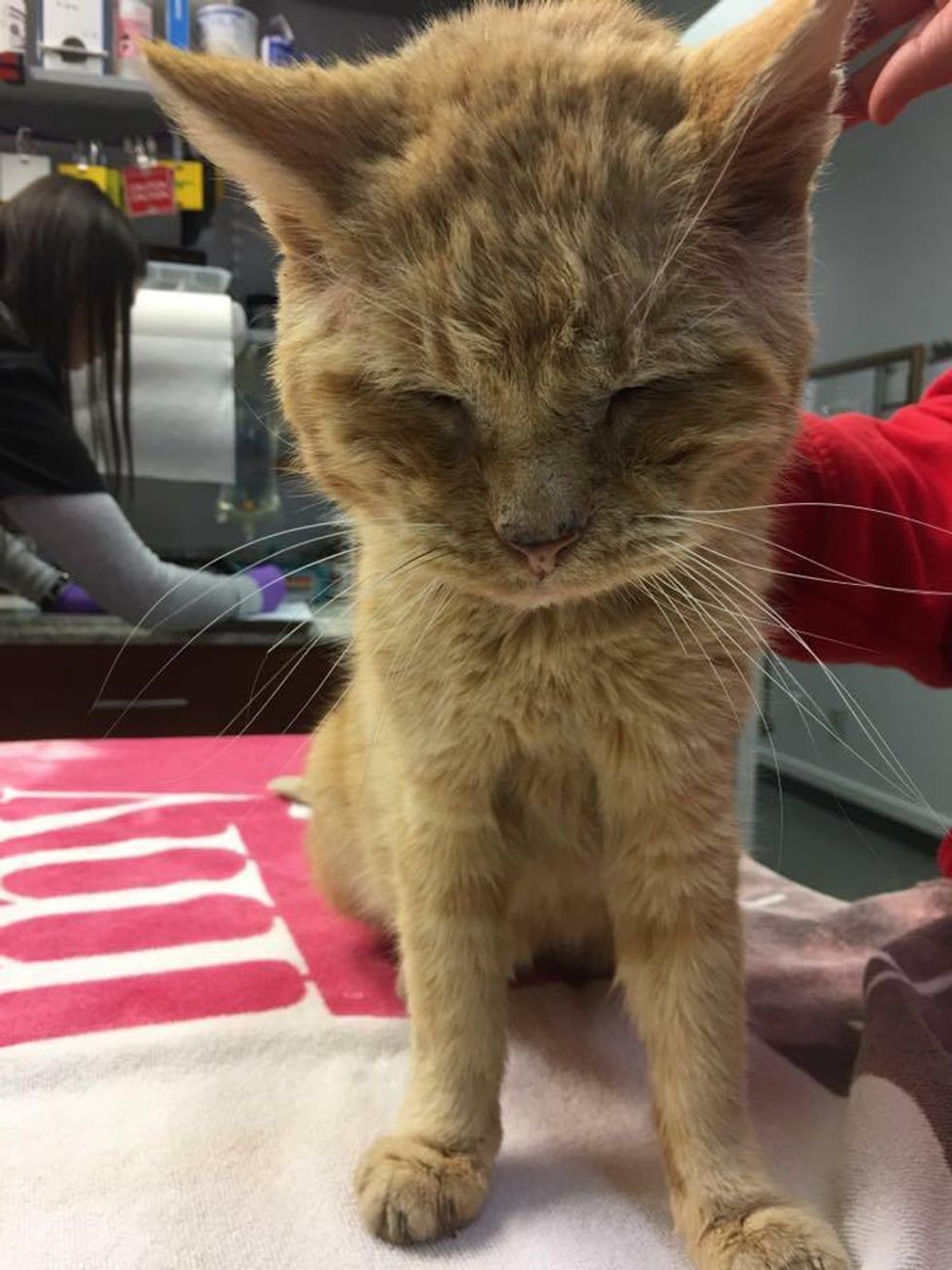 "I looked at him and knew that he was a very old fellow…. The smell from him was awful. He was so skinny… He was immediately taken back for a combo test. The blood was drawn and I sat there and waited."

They feared for the worst given his condition, but to everyone's surprise, he was tested negative for FIV. Tuckwiller and her team were determined to help this broken soul get back on his paws. 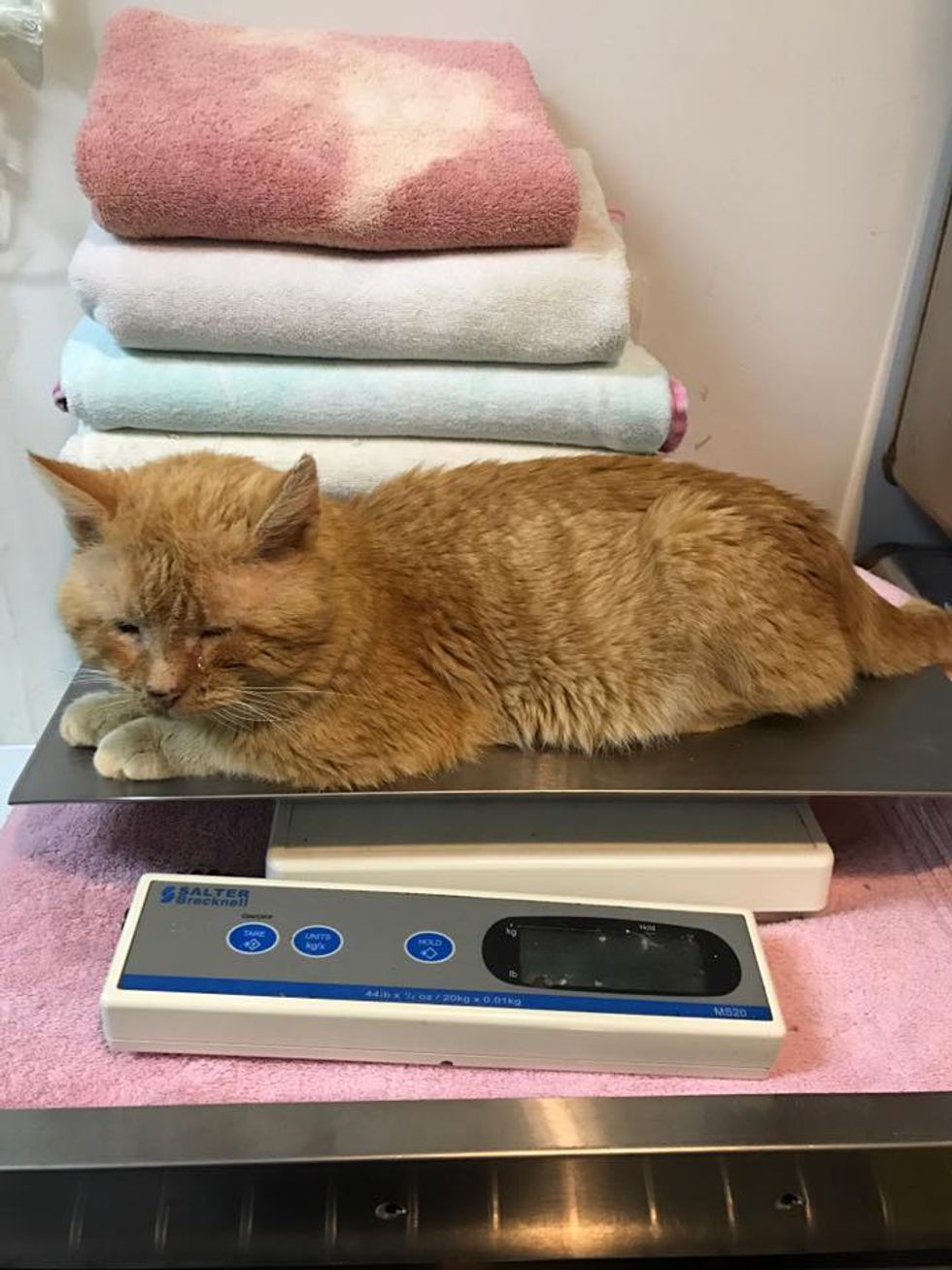 For the first time in a long while, Fargo finally felt safe enough to sleep. "He has been on his own for so long and is so old that he would not have survived much longer…"

Just one day after his rescue, he could open his eyes much wider. He was eating and drinking like a champ! Whenever he was touched, he let out thunder-like purrs and chirps. [Scroll down for video] 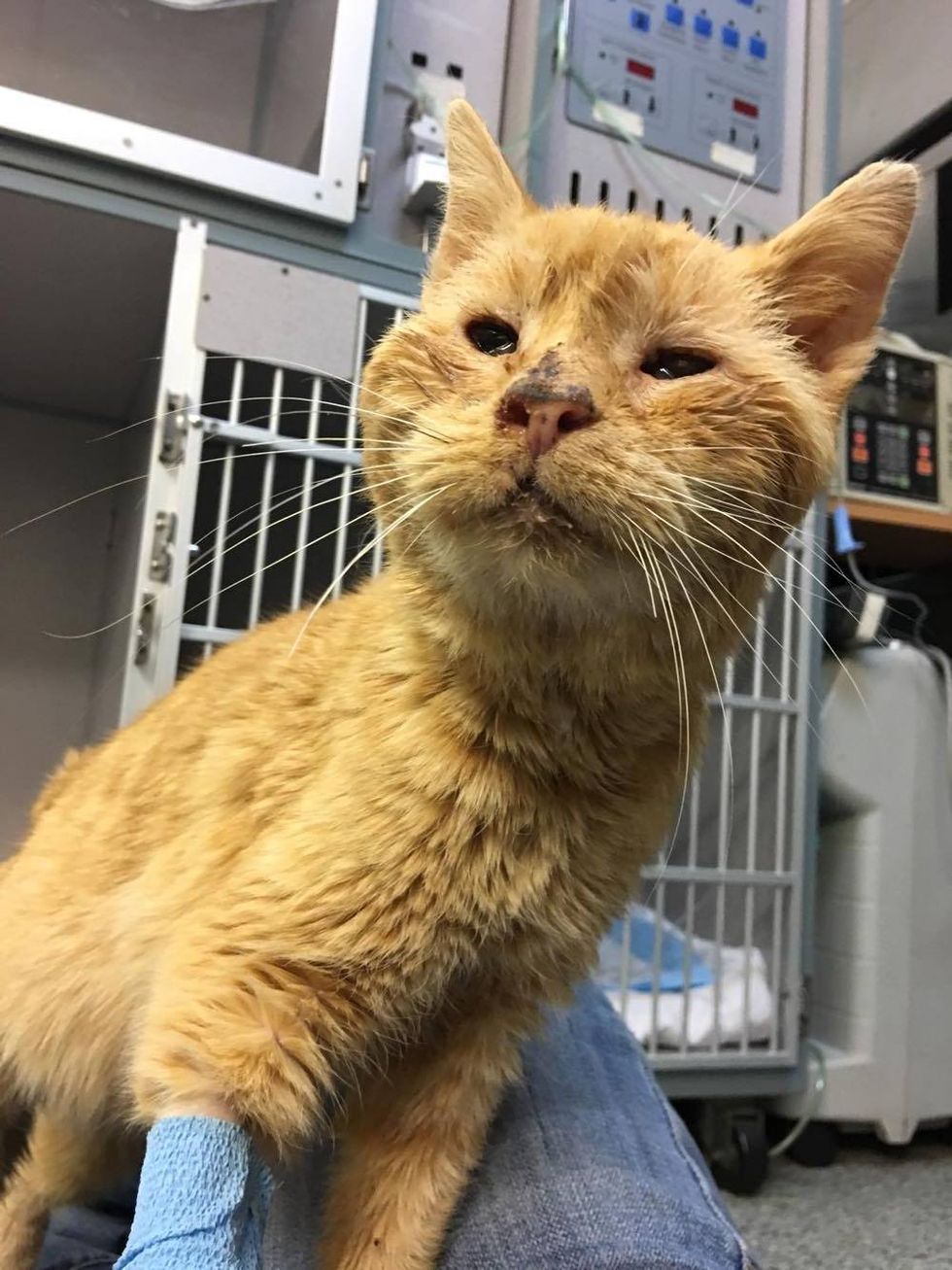 It's likely that Fargo has spent most of his life living as a stray fending for himself. No one knows about his true age, but there are telltale signs that show his seniority. The ginger boy is more than ready to enjoy his retirement.

His past is a mystery to all, but what they do know is that Fargo will live out the rest of his life like a king. 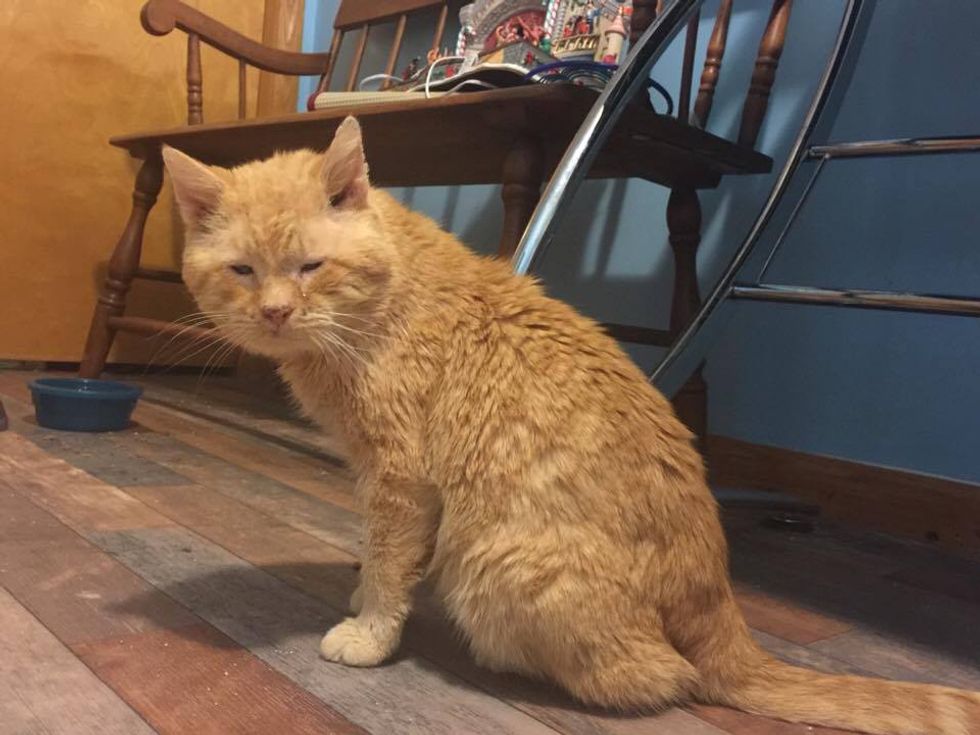 "Fargo sure is living the life with his foster family. (We will not adopt the boy out, we are basically hospice until his very last breath.) Other than old age, medically, he's doing fine."

The sweet ginger has one tooth so his diet consists of only wet food and he absolutely loves it! 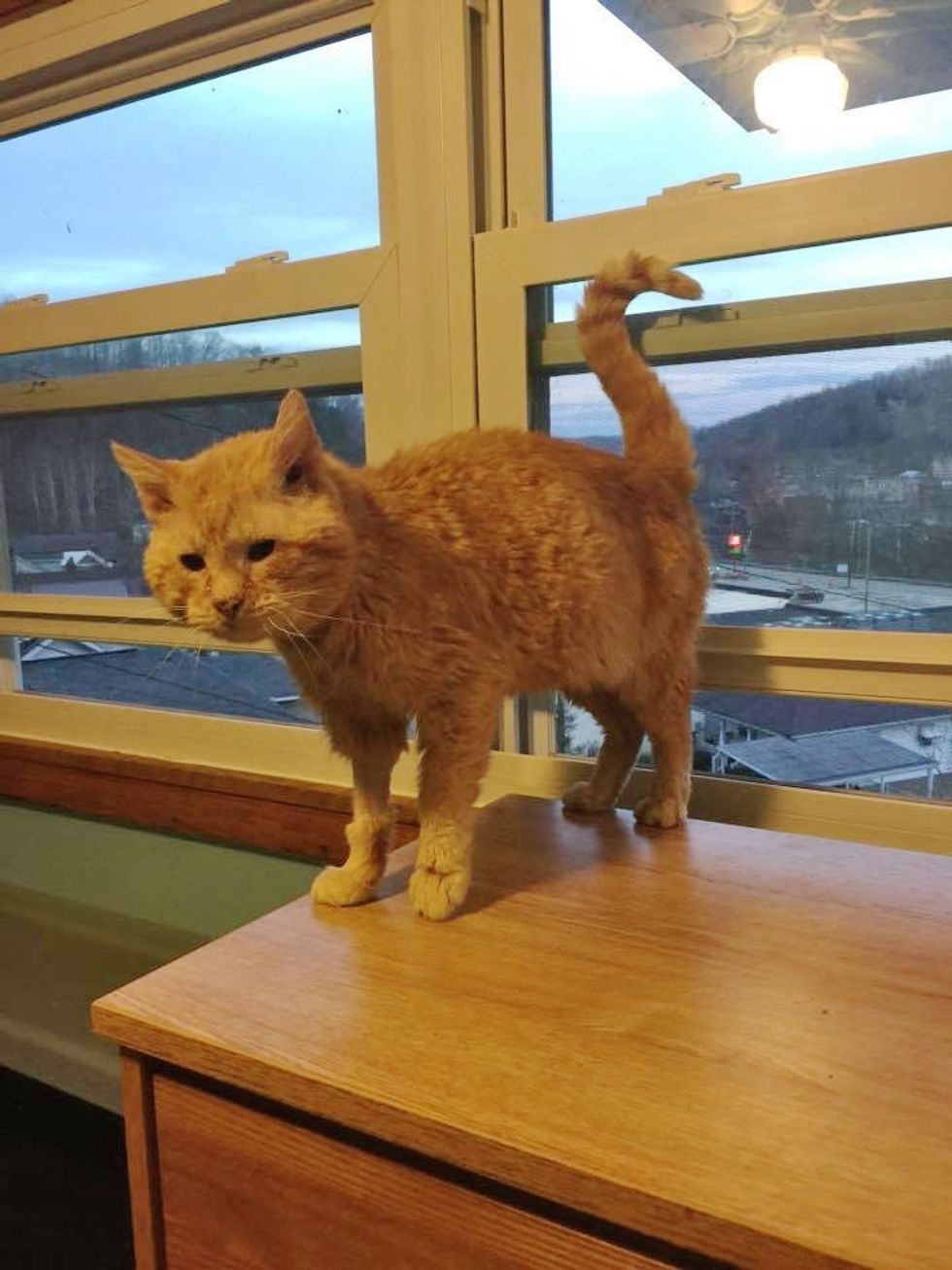 "He is so incredibly sweet, his purr is unlike anything I've ever heard! When he gets feisty, he nibbles at your hand with his one tooth," Emiley Schoolcraft, Fargo's foster mom, told Love Meow.

"We are unsure of the amount of time he has left on this earth, what we are sure of is the love we have for this sweet old boy and the amount of love he has for us."

Fargo has used most of his nine lives after surviving it all. This old boy is a fighter who was brought back from the brink. If he could talk, he would tell you his many life stories. He's a tough little guy with a gentle loving heart and an incredible purr machine.

The sweet old boy has finally found the home he always wanted. 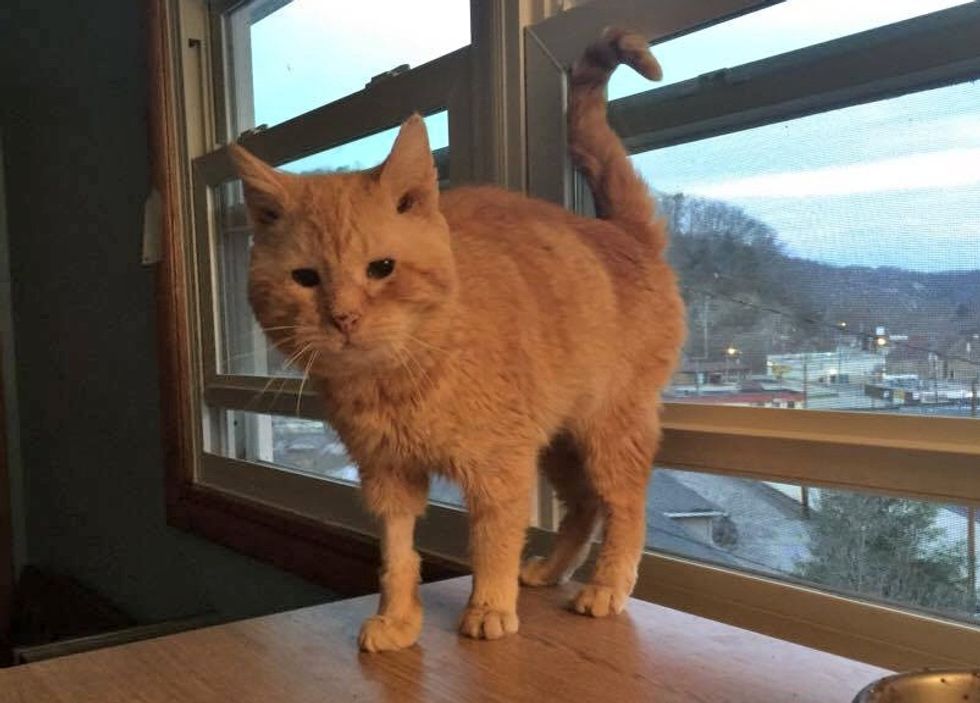 Related story: 23-year-old Cat Given Up to Shelter Is So Thankful to Be Loved Again…