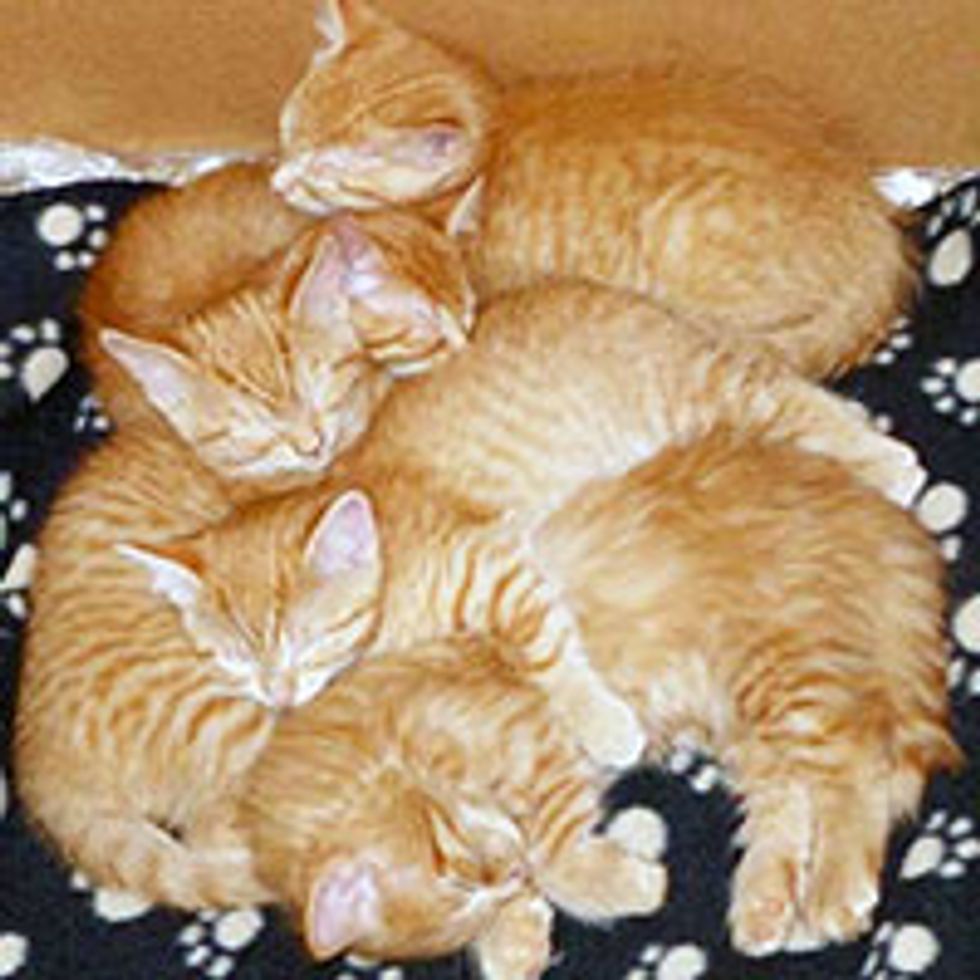 Ginger Family of Seven and Their Journey to Forever Homes

Most ginger cats are male, but Cinnamon the rescue ginger stray is a proud mama of six very fluffy also ginger kitties.

Cinnamon was two years old, when she was found pregnant living outdoors. PAWS Rescue took her in from the irresponsible people who weren't caring enough for the cat. "Jenny at Kook Kats called us to make sure our offer still stood - we'd offered to home a mom/kittens about a month ago," said Natash. "She arrived on Tuesday November 8th for an extended stay with us."

Exactly a week after she came to her foster home, her belly popped and she delivered six very tiny furballs. "It's a boy, and a girl, and a boy, and its… Ginger Mania," Natasha added.

"For such tiny little kittens, these guys are all gumption!" It was a nearly impossible task to tell them apart.

Cinnamon is a sweet cat mama. She allowed the fosterers to pet her and even touch the kittens. She was very protective of her babies. When she just left the nursing zone for a moment to get water or food, she would come running back if she heard a squeak.

About half way through week 2, their eyes started to open and ears perk up. "Some open one eye at a time, you get greeted by winking kittens."

"About midweek I noticed that they purr when feeding… a tiny rumbling sound. They massage mom with their tiny paws while feeding," Natasha wrote on Facebook.

They decided to name them after orangey spices, 4 girls and 2 boys: Chili, Nutmeg, Patrika, Cayenne, Saffron, and Ginger, aka the Spice Rack.

Today the entire ginger family has been adopted out. Saffron, now Nuala, is there to stay with her foster family forever. This is their journey from birth to forever homes:

The Spice Rack as newborns

At week 2, they started to handle the kittens as part of their socialization exercise.

Eyes started to open and ears perk up

Cinnamon the cat mama left the box and lured them outside. First time playing outside their nursing zone. It was a riot.

The time when they were all quiet and purry

Mommy eating from a bowl

They copy their mom.

Playing with their scratchy toy as tiny furballs

In a few weeks, their size shot up

Eating together as a family

Paralyzed Kitten Determined to Enjoy Life Like Other Cats, Scoots Her Way into Everyone's Heart