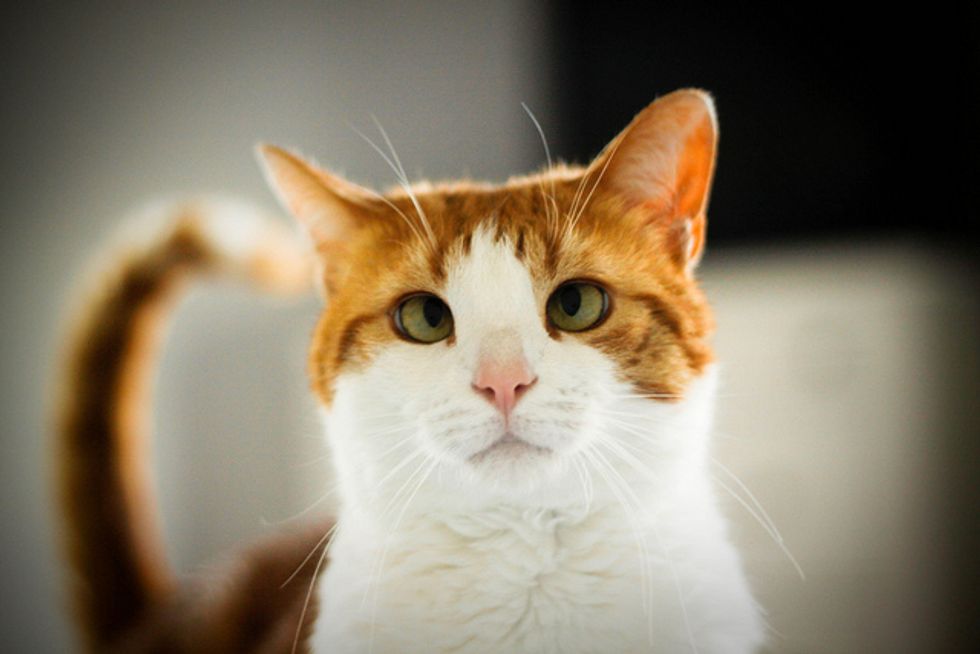 Jimi was born in June of 2006 in a feral/stray cat colony that was living behind a restaurant. A cat rescuer trapped him and brought him into the animal hospital where I was doing my internship during veterinary technician school. I was first captivated by his cute little crossed eyes, and then I got to know his sweet nature and just had to bring him home. His original name was "Lucky" but he really looked like a "Jimi" to me. He came home with me in December 2006 and fit right into my family, which included two other orange kitty boys.

The following summer, the three orange boys and I moved into the apartment above the animal hospital where I work. We have been living here for three years now. Jimi has his routine down... Every day, without fail, Jimi comes to "work"... even Sundays and holidays! He goes to eat Elvis' (the hospital cat) food, use Elvis' litter box, and then climbs in the bed and sleeps. At night, he comes back in and helps himself to Elvis' supper. Jimi doesn't chew his food. When he eats dry food, he swallows the pieces whole. He opens and closes his mouth as if he is chewing, but there is no crunching sound.  We are no longer a kibble household, but Jimi gets his crunchies from downstairs.

Jimi has such a sweet and loving soul, and he is kind to everyone he meets, human and animal alike. He especially loves kittens! He follows them around, grooms them, and loves to play with them. he has helped us to socialize a few foster kittens that have spent some time with us at the animal hospital. Jimi is an excellent hunter of bugs, especially flies, but his gentle nature takes over, and he never kills them like most cats would.

Jimi is the only one of my cats that doesn't jump on the kitchen counters or table. It's not because of his stellar good manners, but because he physically can't do it. Jimi has some handicaps due to his crossed eyes and also his crooked little hind legs. So I had a set of steps built to help Jimi get up into my tall bed. When he tries to look at me and give me a sweet little "mow-row," his eyes are always looking off over my left shoulder, but I believe he thinks he is looking at me in his eyes. He has adapted quite well and doesn't seem to know that he has any problems.

Jimi might be the littlest kitty boy in our family, but he is a big brother to this pesky dog sister. Don't tell the other cats, but Jimi secretly loves his dog and doesn't think she's a pest. In fact, they snuggle together in bed every morning. He usually starts the day covered in dog slobber.

Jimi can be found napping in the strangest places. One time, I found him all tangled up in a bunch of computer cords, sound asleep. A lot of times i find him sleeping on the hardwood floor, even though there are numerous pieces of human, cat, and dog furniture to choose from. He uses his little hands as a pillow, it's truly the sweetest thing ever. I always say that he learned to make himself comfortable during his kittenhood, when he lived in a dumpster. You gotta make do with what you have, says Jimi!