Kitten Found Alone on Street, Takes to Tiny Tuxedo Cat Who Was Rejected by His Mom 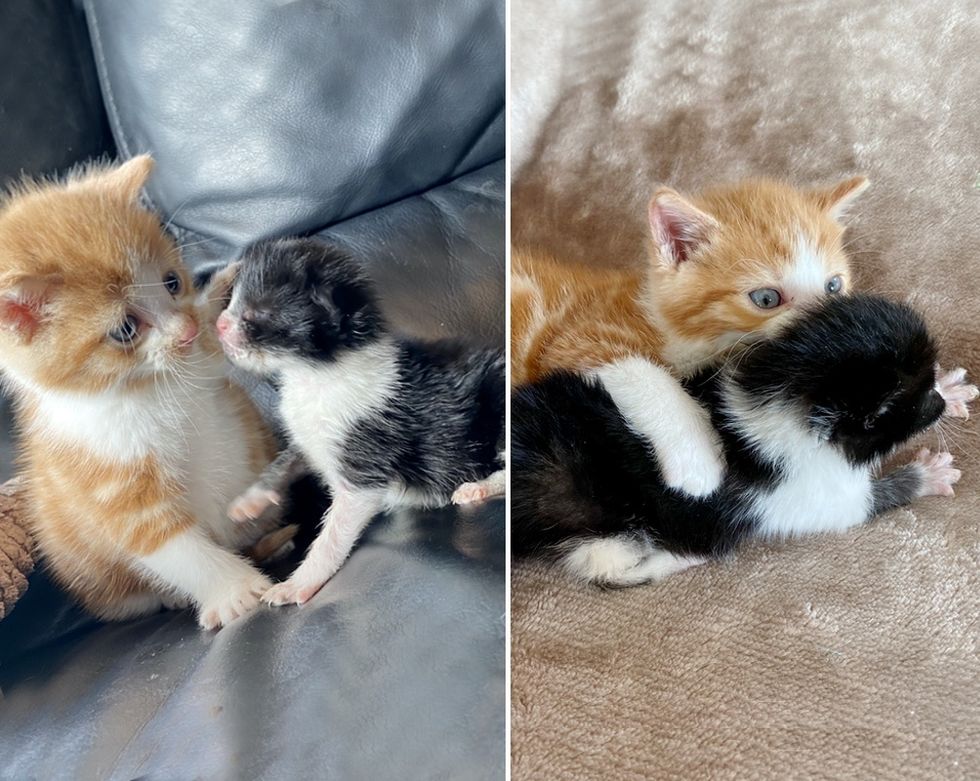 A kitten was spotted wandering the streets of Liverpool (UK) early October when some students came across the frightened little stray.

He was alone without a mother in sight and no one came to claim him. The Good Samaritans brought him to the RSPCA Wirral and Chester branch for a chance at a better life. The scared little kitty was hungry, a bit dirty and in need of a lot of TLC.

Anthony Joynes, a RSPCA Inspector and animal rescuer, lovingly named the little bundle of fur Lennon after the street (John Lennon Drive) where he was found. The kitten was too young to be out on his own, and had he not been found, he might not have made it through the night. 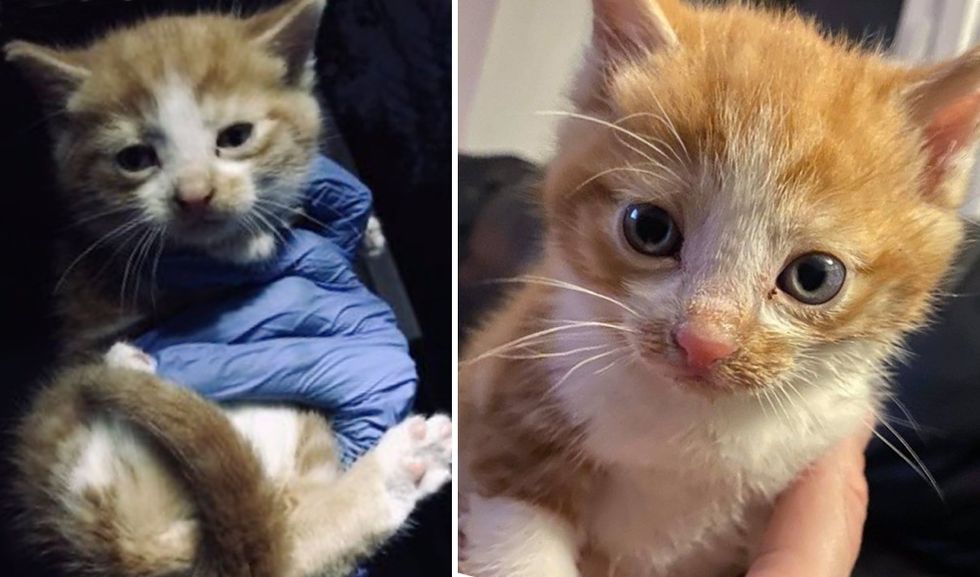 The ginger and white kitten quickly warmed up to his rescuers and felt so much better after getting a full belly and a warm bed to sleep in.

Upon arrival, he was estimated to be around four weeks old and needed to be bottle fed around the clock. Despite all the attention he got from his caretakers, the kitten craved a constant companion. 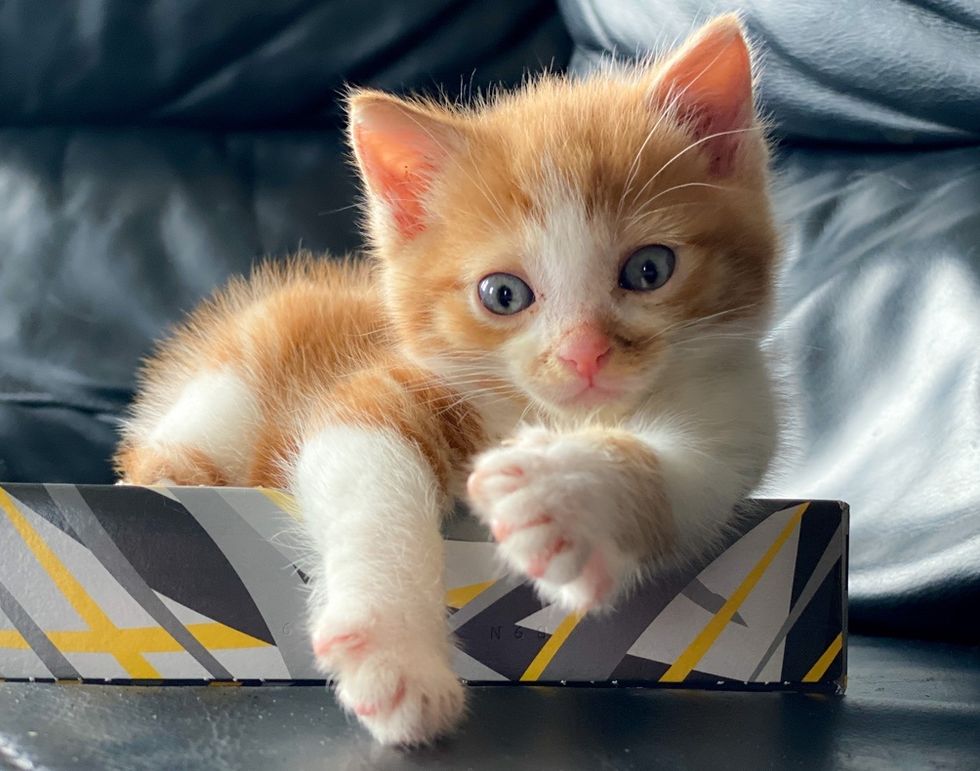 Lennon was placed in the good hands of diligent staff members at the RSPCA, who at the time, were also caring for another tiny singleton.

A tuxedo kitten was just a newborn when he found himself alone without a mother's love. His feral cat mom didn't have any milk supply and rejected him. Staff immediately stepped in to help so the feline baby could be hand-reared every two hours.

The little kitten was brought back from the brink. He relished feeding time with his caretakers and always ate to his heart's content. 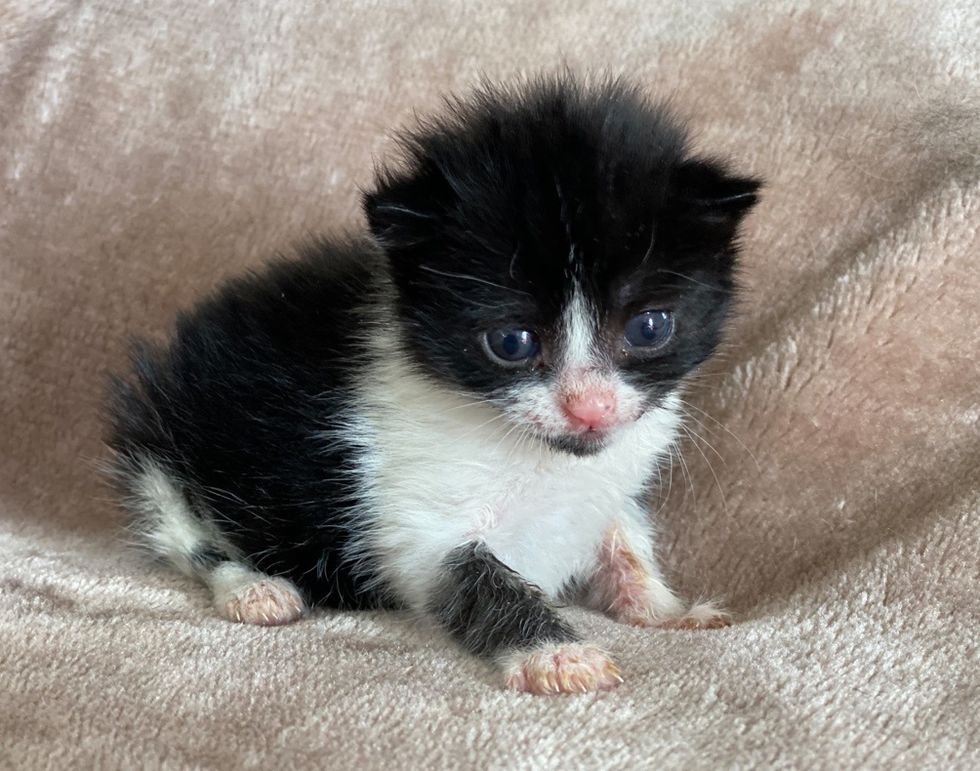 Knowing that singletons could benefit tremendously from having a friend, staff decided to introduce the two kittens. They quickly took to each other and started snuggling. It was love at first sight.

"We introduced him to Lennon as we were helping feed them both. The pair just hit it off," Kay Hawthorne, branch manager, shared with Love Meow. "They play together and cuddle up together. They get on so well it is really sweet." 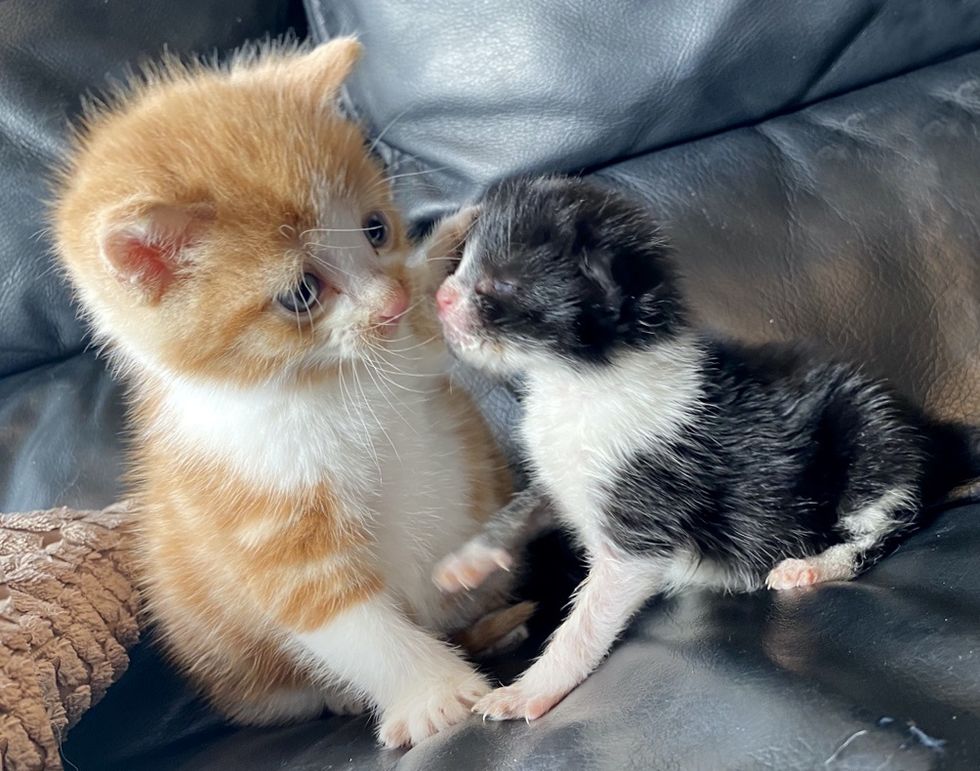 Lennon has since taken on the role as big brother to his tuxedo buddy, aptly named Ringo, and will wrap his arms around him for cuddles.

Despite being smaller, Ringo can wrestle with the bigger kitty and completely hold his own. 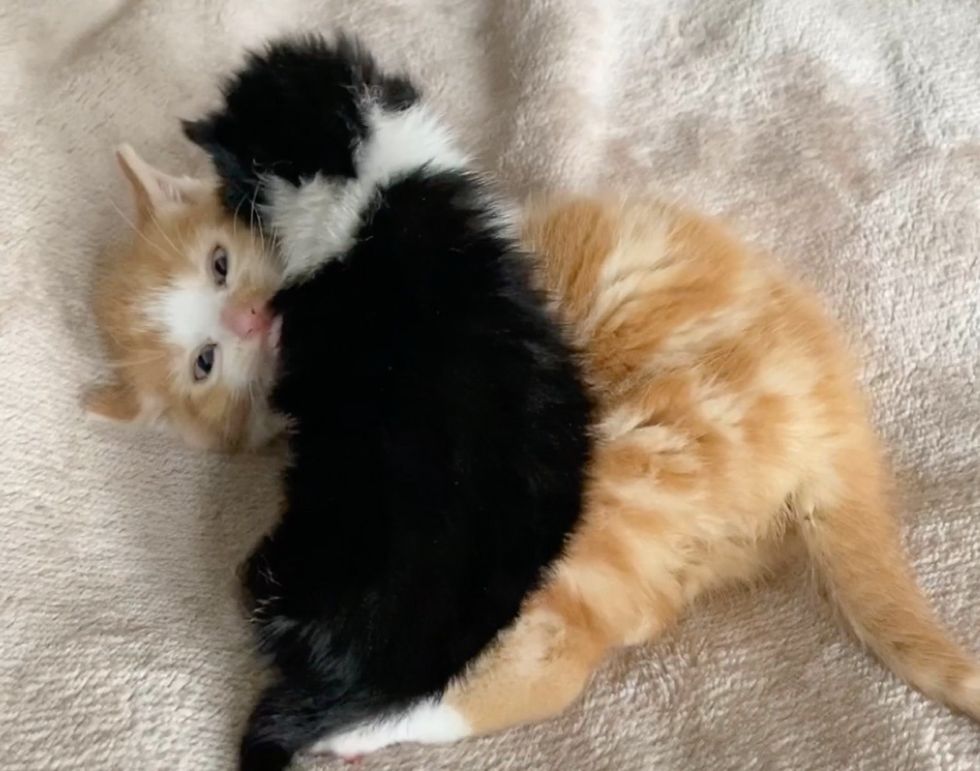 With a buddy to keep each other company, the kittens are thriving. In just two weeks, they have doubled in size and tripled in energy.

When they are not play-fighting, they are napping in an adorable cuddle-puddle. The two best friends constantly fill their room with the sweetest purrs. 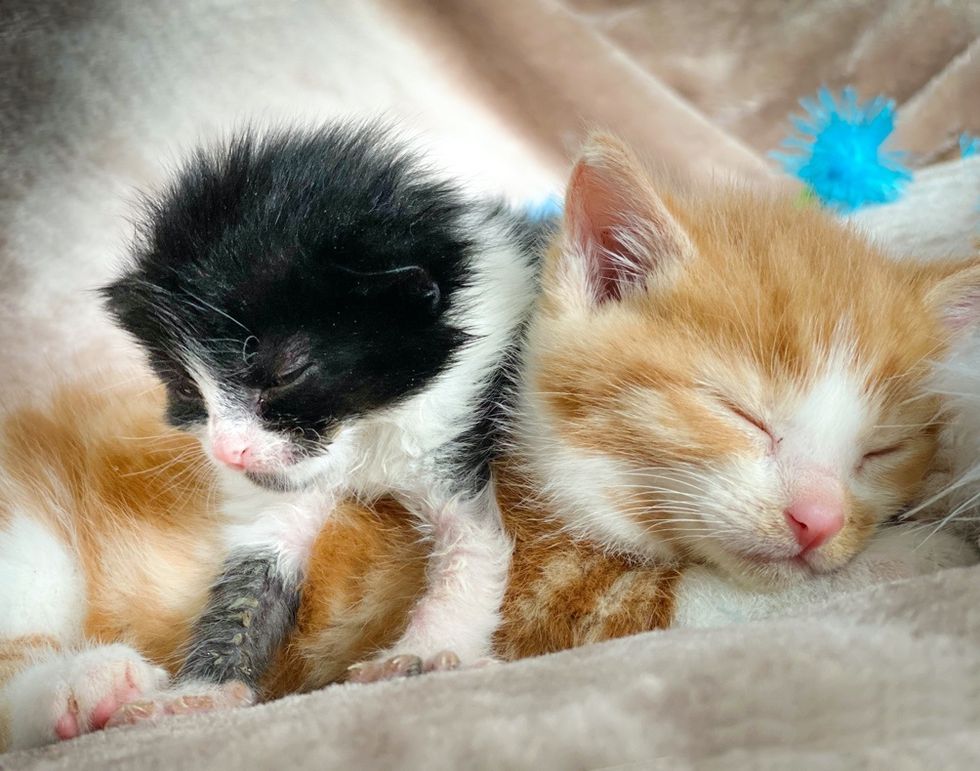 Lennon is getting more playful and rambunctious each day and his buddy is keeping up like a champ. The tuxedo boy has found his footing and is working on perfecting his gait.

Watch the two buddies in this cute video:

Their friendship is special as they both came to the shelter as a single kitten, eager for a companion. Now, they are inseparable like brothers. 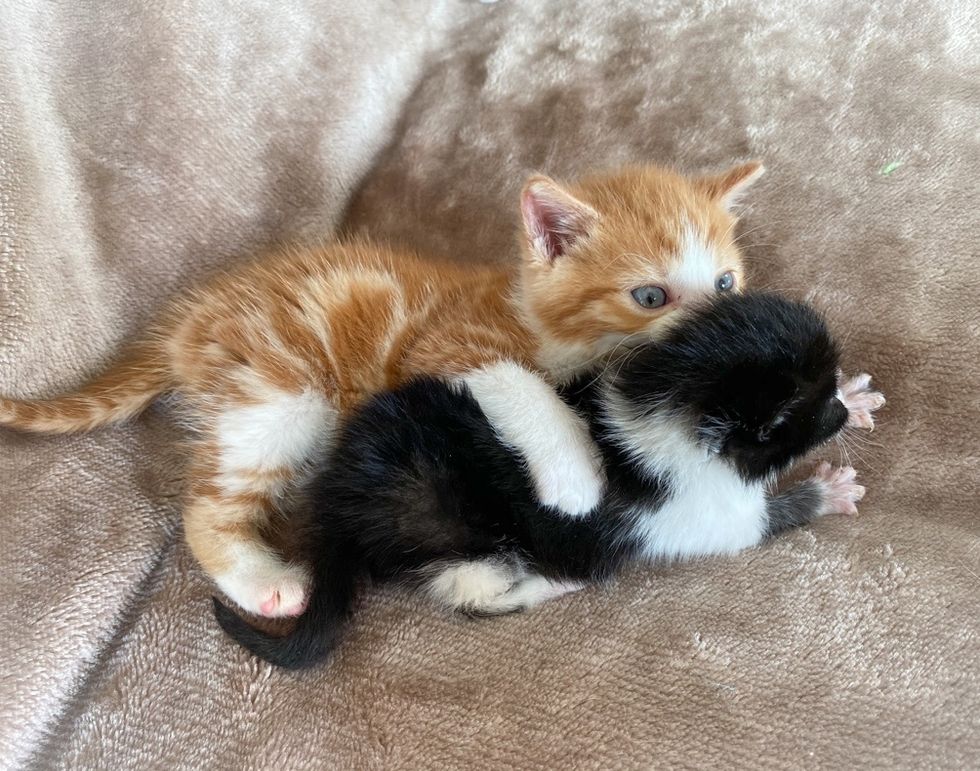 "They both seem to be doing so well and are certainly getting by with a little help from their friends at the branch," Kay shared with Love Meow.

Lennon shares his toy with his best friend. 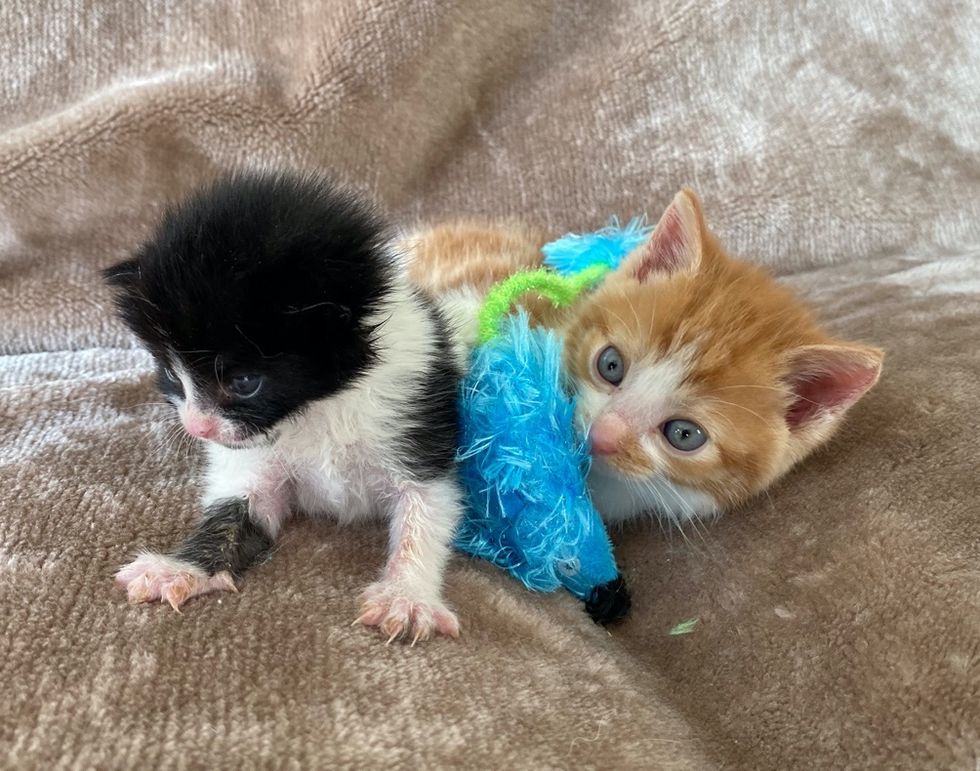 The former stray and his tiny partner in crime are blossoming into happy, playful kitties. 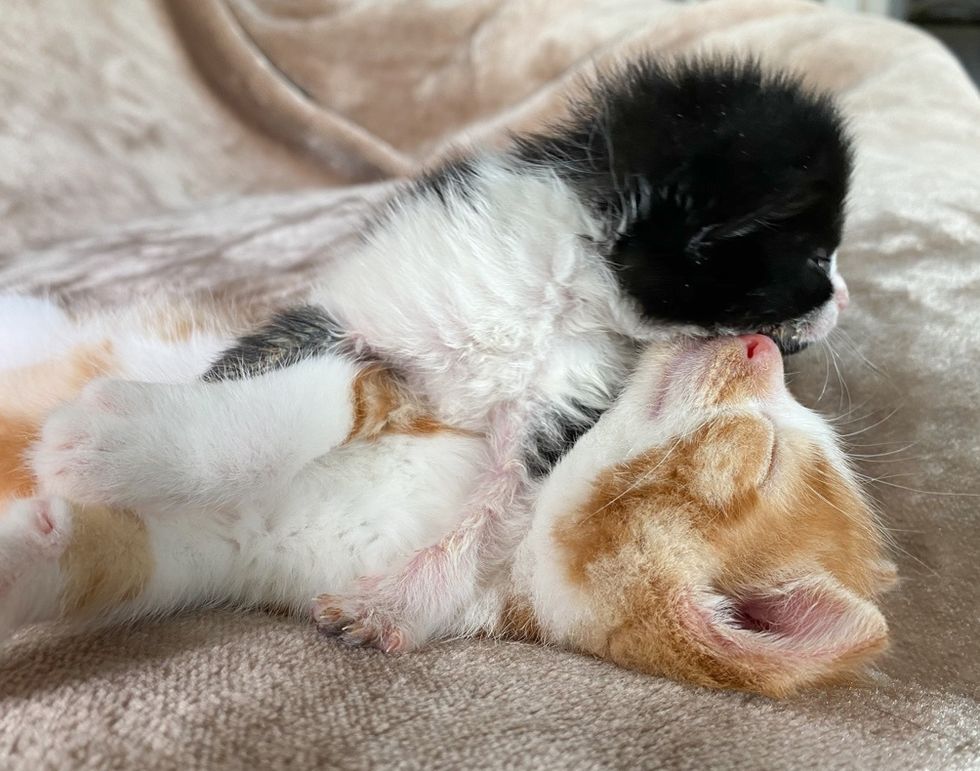 They are loving their VIP life with good food, warm beds and plenty of cuddles to go around. 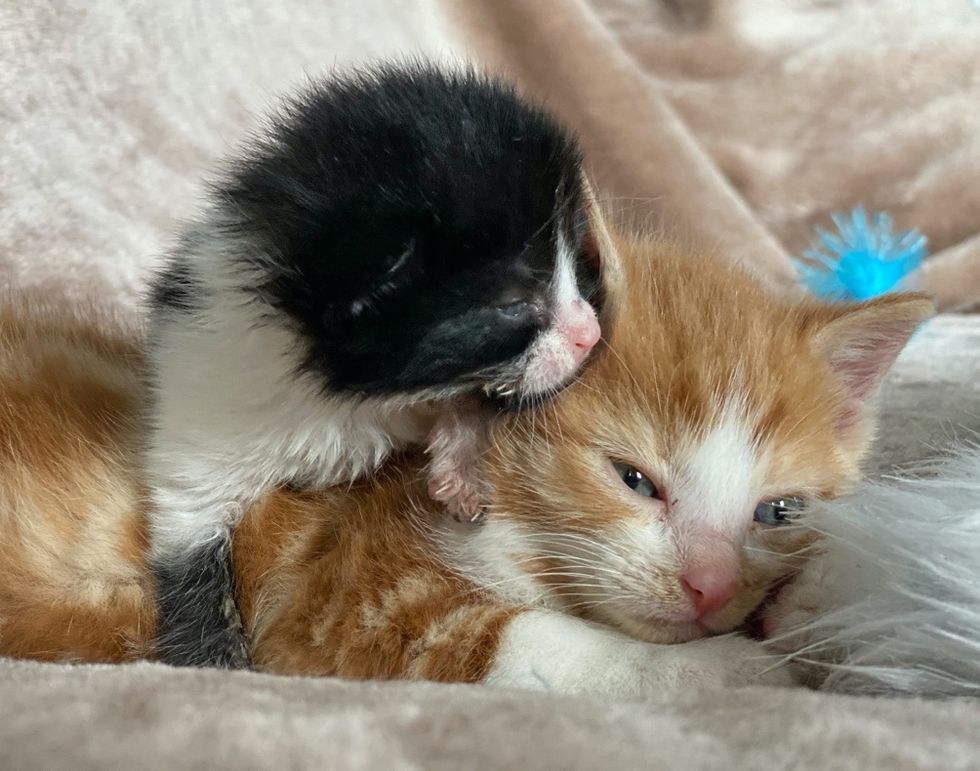 Related story: Cat Clings to Her Only Kitten After They Were Rescued from Life on the Street