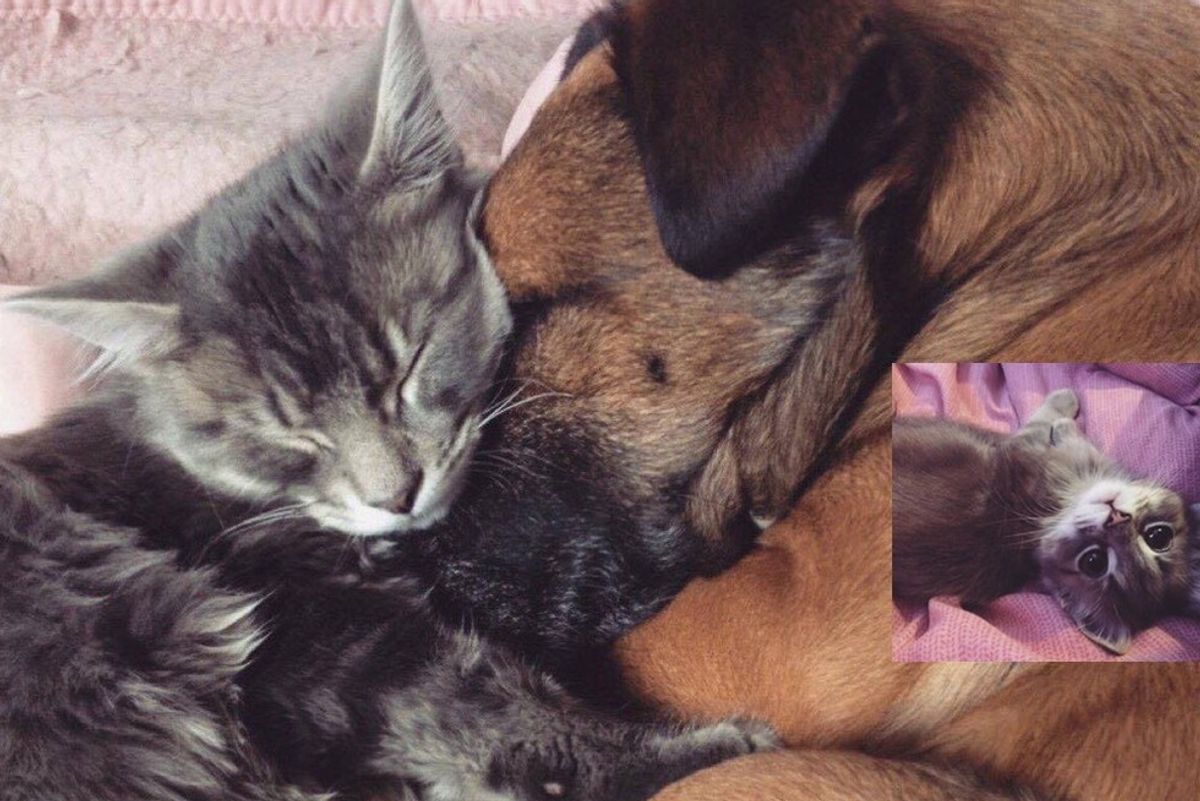 A tiny 4-month-old kitten became a guardian angel to his canine friend who suffers from epilepsy. A year later, he's still guarding his buddy every single day.

Meet Jinx the cat and Toby the dog.

Toby the dog was five years old when he started having seizures. It was back in January 2015 when the family received his diagnosis. At the time, they adopted a tiny gray kitten.

"The two just bonded. Jinx gives him strength and nurses him all the time," Emma told Love Meow.


Jinx was 11 weeks old when he came to his forever home. A few weeks later, he and Toby met. It was love at first sight.


Jinx the kitten when he came to his new home.Courtesy of Emma

"Jinx bonded with Toby when he was very tiny, I'd say about 16 weeks old, they would play together and sleep together too."


Soon they noticed something extraordinary between the two fur buddies.

"He's a great comfort to Toby who suffers from epilepsy. Jinx will warn me if he senses a seizure coming on by rubbing his head with his, he gently grabs his face and washes his eyes. He will also comfort him after by guarding him while he sleeps and recovers," Emma told Love Meow.


"They have an incredible bond that helps me to give Toby immediate attention!"

"I choose to sleep down stairs now along side all my babies, we take turns on staying in the house, so Toby is not alone at any time.

"Jinx acts as a great communicator, he plays a massive role on Toby's health and wellbeing, and he does that all on his own," Emma told Love Meow.

"On the 25th March, Toby was sat In the garden, and jinx came through to do his thing and he turned around and grabbed Toby's face, and washed his eyes and wouldn't stop for about 3 minutes. I called my husband and said, this is a warning that Toby's going to have a seizure, he did half an hour later."


With Jinx's help to alert the family, Emma is able to provide aid to alleviate each episode. "I keep him cool as best I can and keep things calm around him, giving him as much reassurance as possible," Emma told Love Meow.

"Toby had just had a seizure and jinx would not leave his side, he was with him for at least a hour."

"Being prepared by providing a safe area so he doesn't hurt himself, also having his diazepam to hand to stop it if it becomes prolonged or very difficult for him to manage."

While Emma tries to help Toby feel as comfortable as possible, Jinx never leaves his side, guarding him through the ordeal. He watches over Toby like a caring nurse and the love he has for his buddy is immeasurable.

When Jinx was a wee kitten, he sensed that his canine brother was in need and provided love and comfort. Now a year later, he's still that protective feline guardian to his bestie in life.

Toby feels better every day with Jinx by his side.

Toby is happy and lives a contented life because he has a loving family and a feline buddy whose love never ceases.

Jinx all grown up now :)