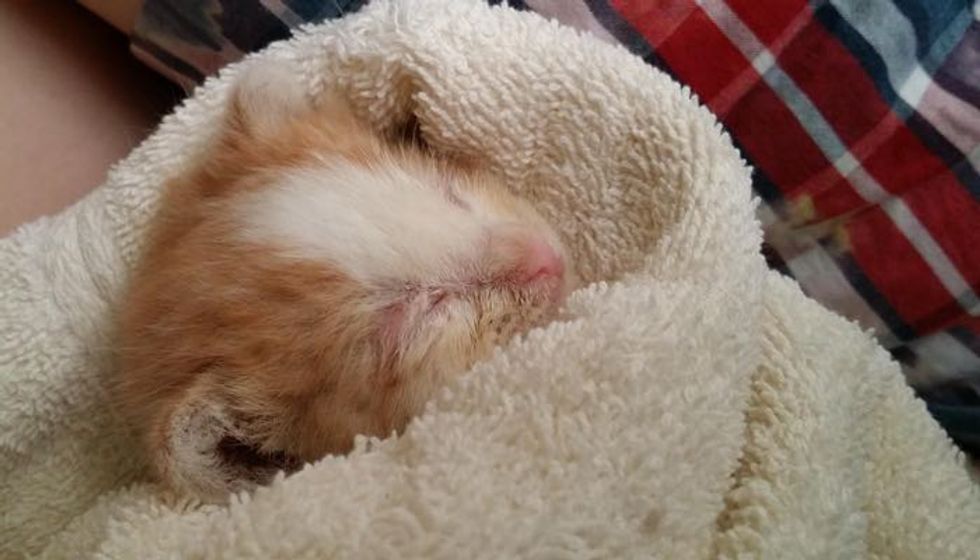 Kitten Found in Flowerbed Screaming for Help. The Change In One Day!

He was just 3 weeks and 3 days old when spotted in a garden, screaming for help.

They heard cries in a garden and followed them till they saw a tiny ginger kitten screaming in a flowerbed covered in flies.

His eyes were shut tight. They picked up the kitten, gently cleaned off the flies around the eyes and wrapped him up in a towel. "Then we went to get formula," imgur user metalcupcake wrote.

"After a second full gentle washcloth bath. I picked fleas off him with tweezers and a lice comb."

On his way to his new home.

The difference it made in one day...

He was so tiny that he could fit in the palm of their hand.

Finally he could open his eyes to see.

They got him a heating pad and lots of blankets. No more flies so he could finally nap in peace.

That night, he demanded to climb up and nap on his human. He made it through the night and began to thrive.

They named him Duo Mewell. His eyes were clearing up and he got more energy and wasn't shy about telling his human how he felt.

Duo even found a furry friend to snuggle with.

Soon he figured out how to climb on his human's bed and now it belongs to him.

It's been a year since they found Duo. He's really grown!

Do you have a rescue cat? Share this story with your friends!