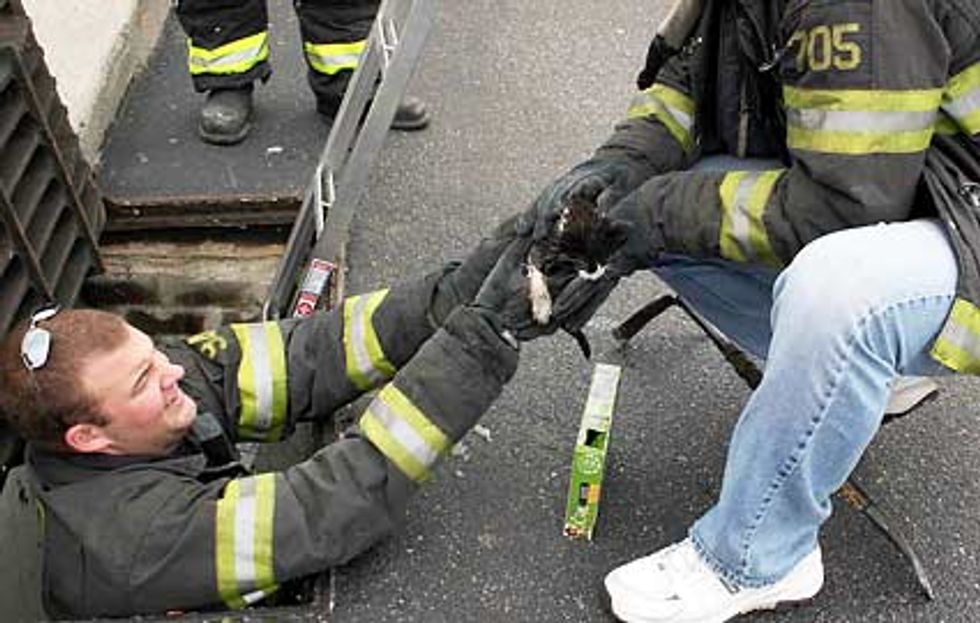 Did you know that having a keen sense of hearing can save lives? A precious little kitten almost froze in a frigid Long Island storm drain was recursed and whisked away from death this week.

A woman was in a store parking lot on Long Beach Road, when she heard a faint crying sound from beneath a drainage grate. She immediately called someone from the Humane Society who then contacted the Fire Department. Firefighters arrived at the scene and started their rescue mission at around 1pm.

A ladder company was called to give the firefighters a hand in the rescue. Everyone there was working together, trying their hardest to get the kitten out of the drain.

The tuxedo kitten was shivering and extremely frightened, so the initial rescue attempt to coax the kitten out was not successful. The second attempt was to spook the kitten with a fire extinguisher. The poor feline critter eventually jumped into the arms of his rescuer :-).

The kitten was named Storm. He suffered from hypothermia, but was taken to the Hilton Animal Hospital for veterinary care. After having food and his own warming cage, Storm seemed to lighten up a lot.

Storm will be transfered to the Long Beach Humane Society to help him look for a forever home with an endless supply of warmth and love.