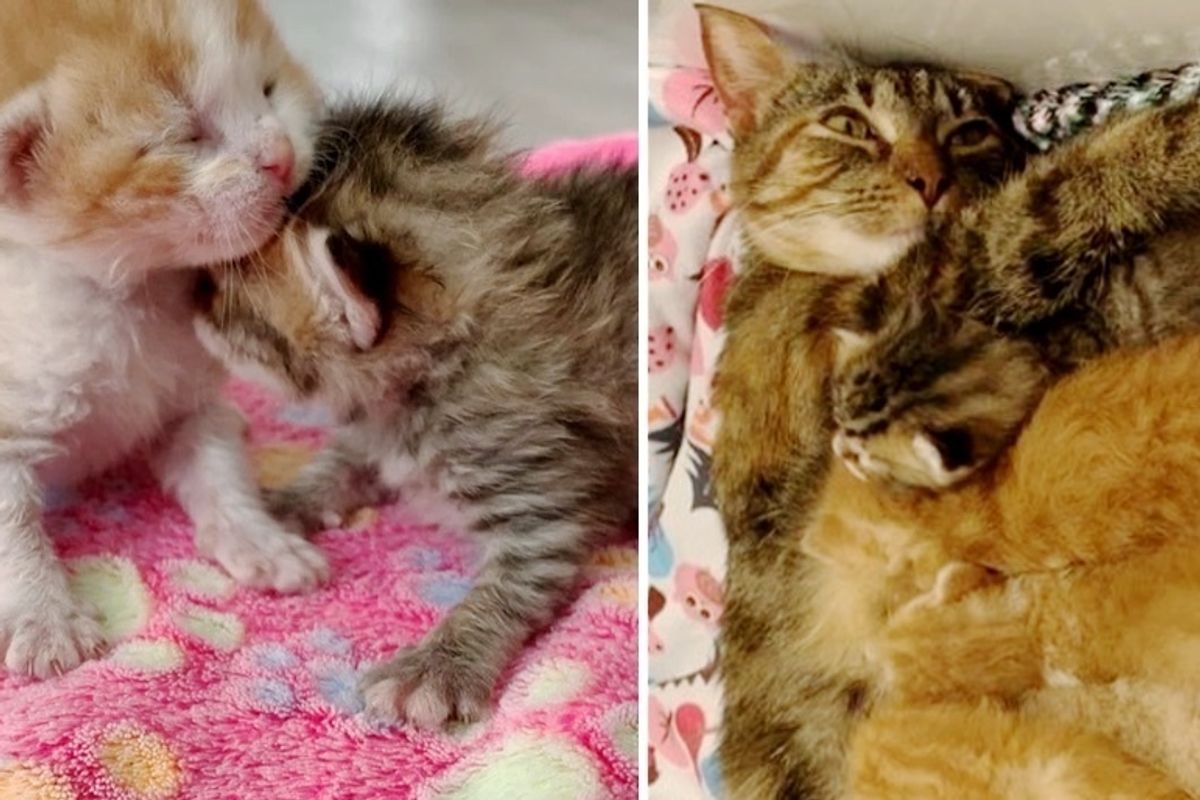 Two orphaned kittens who were abandoned outside, found love in a cat rescued from the same fate.

Last week Monday, Barb, a foster volunteer based in Fort Wayne, Indiana, was contacted about two orphaned kittens discarded outside in Allen County.

A Good Samaritan heard them crying from inside a dumpster. Without hesitation, the person climbed in and found them in a box. The kittens were then brought to EB Feline Rehoming, a local all-volunteer rescue group, for help.

Barb took them in to foster and immediately started round-the-clock bottle feedings. In just one day, the kittens, Roscoe and Rosebud, perked up and were eating like champs.

Despite getting the best care at their foster home, Barb knew nothing could compare to a cat mom's love and nourishment.

On Friday, in Columbia City, Abbi, director of Whitley County Humane Society, arrived at their shelter early in the morning and discovered a makeshift box outside the door.

She was shocked to find 11 cats huddled inside. There were two moms and nine kittens from two separate litters. "Thankfully, these two mamas and babies were okay but their outcome could have been much worse had it been a little bit colder," the shelter said.

Barb arrived at the shelter a few hours later and offered to take in one of the mamas and her kittens, while the other feline family would go to another foster home. They named the cat mom Susie and her three girls, Anjelica, Lillian, and Kimi, and two boys, Tommy and Chuckie.

Knowing that orphaned kittens would thrive with a surrogate mom, the two rescue groups decided to work together by introducing the two orphans to Susie's little family.

"I brought Roscoe and Rosebud along to the shelter with me, to see if the mom would accept them," Barb told Love Meow.

"The vet tech first placed Roscoe in there, and he immediately started nursing. Susie just licked his head. Then Rosebud was put next to her, and it was like 'oh what's two more?'"

Sweet Susie took them right in as her own, and they became one big, purr-filled family.

"I love when different rescues can work together for the greater good," Barb said.

Susie is very affectionate and constantly purring. "As soon as we got her and the kittens settled into the nursery suite, it became apparent that she was attention starved. She literally stands up on two feet to head-butt you, purring away," Barb told Love Meow.

"She's estimated to be an older cat, around six years old, so it's likely she's had many kittens before. Happy for her as these will be her last!"

All the kittens are about the same age. Roscoe is a ginger just like Susie's kittens, and Rosebud shares quite the resemblance to her adoptive mom.

Susie's kittens adore their new siblings and will cuddle with them together in a purr pile.

Mama Susie is very protective, giving each of her kittens and adopted babies her unconditional love.

After a rough beginning, Roscoe and Rosebud found a new mom and siblings. They couldn't be happier.

Related story: Orphaned Kittens Rescued from the Streets, Need a Mom - a Husky Decides to Help