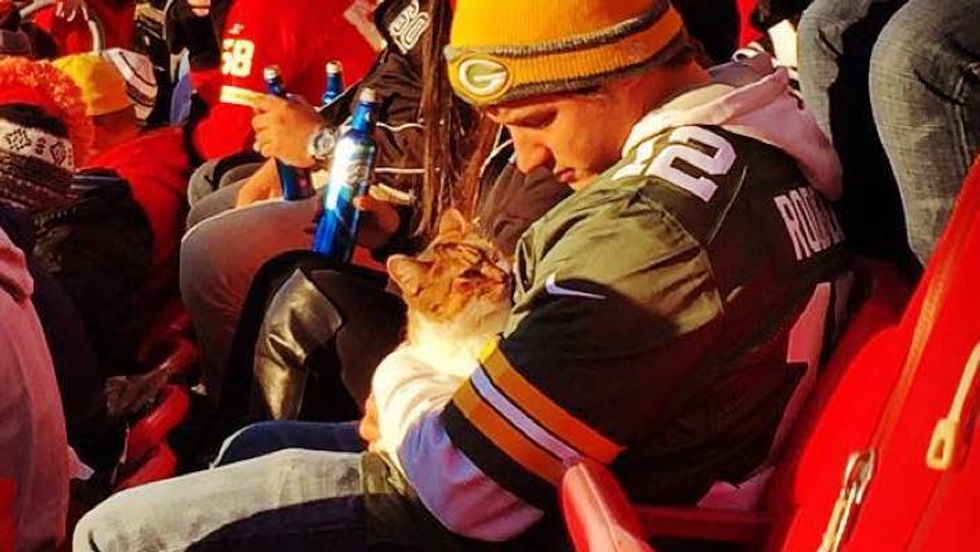 A man rescued a cat that was about to jump off a balcony in the stadium during an NFL game last Sunday. He asked security about the cat and they said he could just keep the kitty.

During the Raiders-Chiefs game, a man wearing a Packers jersey was found holding a cat in the stands at Arrowhead Stadium.

Later his friend shared the story on reddit: "My friend found a cat in the stadium at an NFL game. Security let him keep it," reddit user shortround10 said.

The man explained what happened: "We just found it up on this balcony about to jump so Sammy grabbed it and security told us to keep it."

He held his kitty friend in his arms during the game.

After the story was posted on reddit, people who have crossed paths with the same cat, shared their stories. "I have seen this cat! He lives in the bushes right outside the two neighboring stadiums. I met that cat during the 2014 Royals playoffs," said johnnyhurricane.

"I met him while tailgating for the Royals games in the summer. He just walked right up to us so we gave him some water and bits of our food. Very friendly cat," Dannyg4821 shared.

When the man was walking out of the stadium before the game ended, trying to take the cat home with him, the kitty jumped out of his arms into some bushes.

"The cat fought to stay near the stadium, probably for all of the food scraps," they said.

Have you met a stadium cat? Share this story!