Cat Too Scared To Move, Feels Love for the First Time, It Changes Everything

A stray cat showed up on a family's porch but was too scared to accept help. A couple worked together to save him and showed him love. 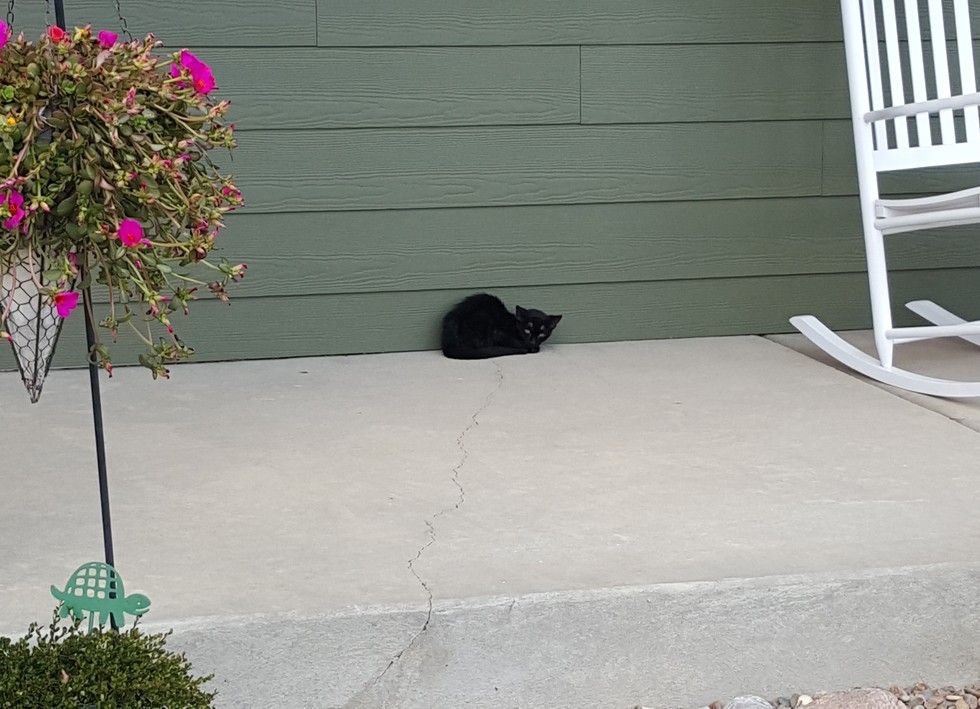 "I got home from work and saw a kitten on our front porch," reddit user StockmanBaxter said. "(I) took a step toward him, but he bolted behind our house. I walked through our neighbor's yard, saw him in their garden, and then he disappeared."

The very next morning, he saw the kitty again napping on their welcome mat by the front door. "We tried to approach him, but he ran again. I went around one side of the house, and my wife went around the other. We were able to catch him this time."

They took in the frightened kitty and set up a makeshift home in the garage where there was a warm bed, a clean litter box, plenty of food and water. 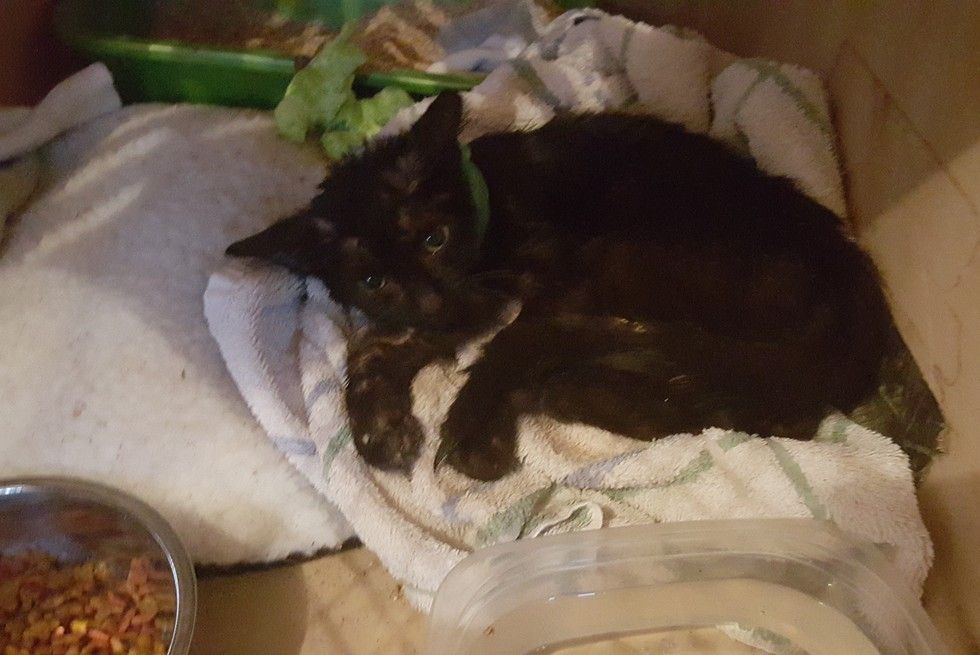 "We had to get him scheduled at the vet for shots and a checkup. We wanted to make sure everything was ok before bringing him in the house with our other two cats."

Jedi was infested with fleas and ear mites. "We could see them crawling all over his body. He was also extremely skinny with quite a bit of hair loss. It's hard to tell by just looking, but he was skin and bones."

When the couple was around, Jedi would freeze in place and wouldn't make a sound. He would hide in the corner when he heard them come near. The kitty was so hungry but would not touch the food in front of them. As soon as they left, he would instantly start eating. 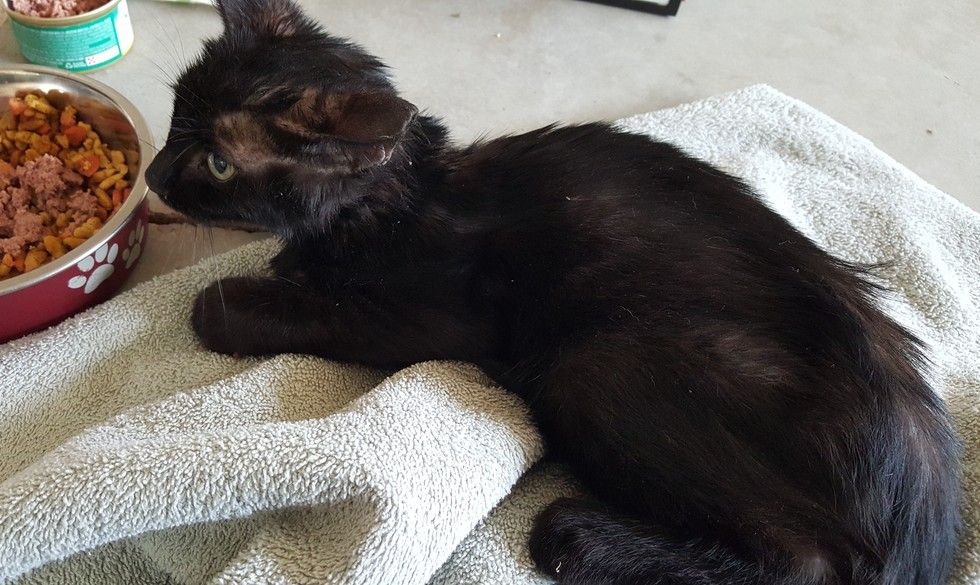 The couple continued to earn his trust by feeding him and slowly getting closer to him. Finally he was less afraid and even let them pet him.

"His first time eating in front of us. He would only do it when wrapped in a towel on my wife's lap." 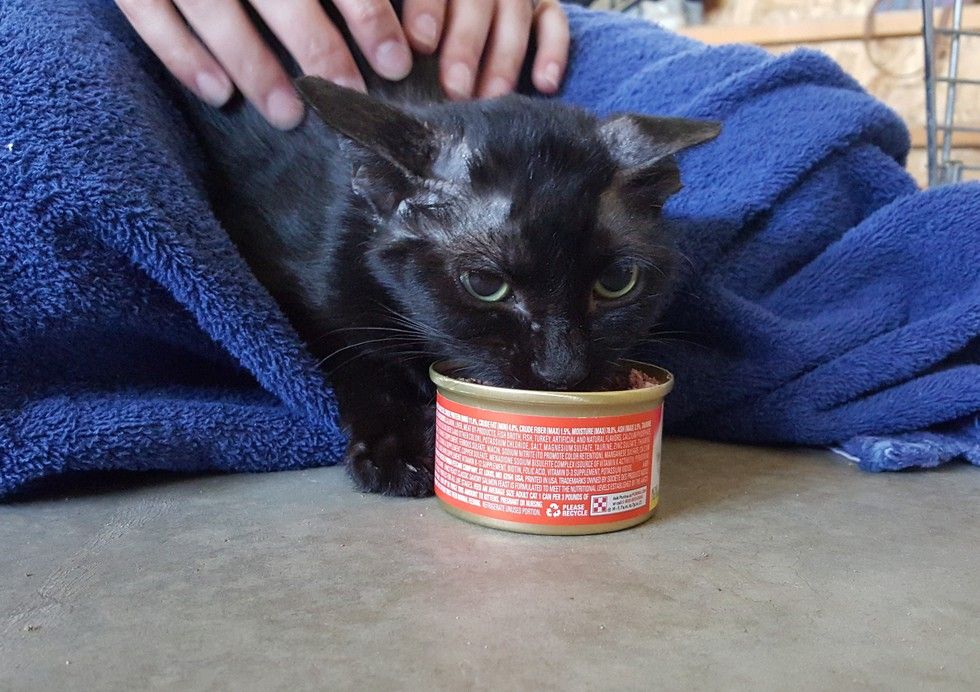 It was time for a much-needed bath.

"Bath time with flea shampoo after being treated with medicine from the vet for a few days... Getting him ready to come inside with our two other cats." 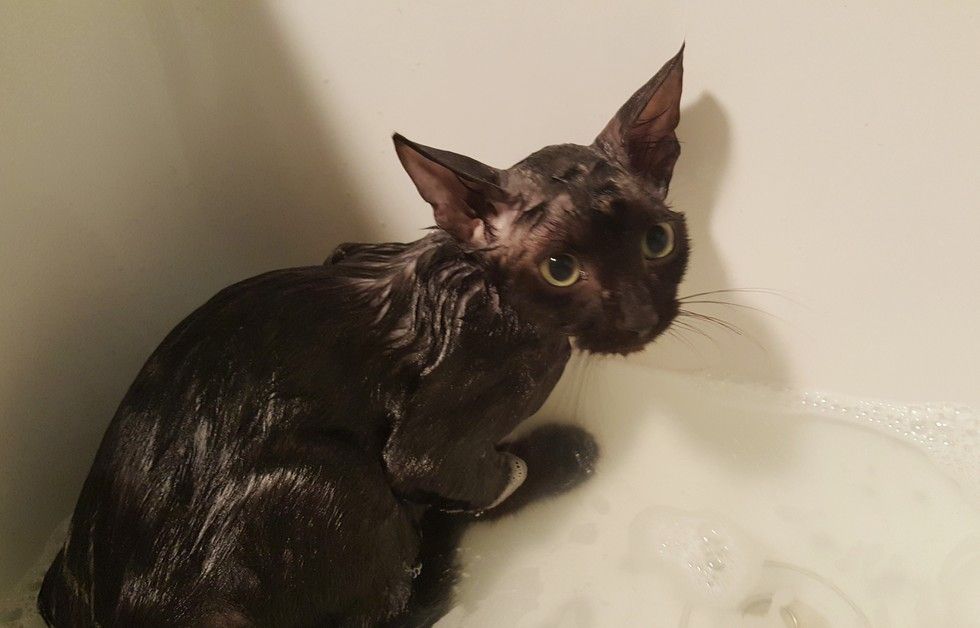 One of their cats Jingle (also a rescue) was very curious about the closed door.

"We cracked it open one morning so she could see him for the first time. She meowed at him and he actually meowed back! (This was the first time we heard him make any noise.)

"The cat conversation continued and it's like a switch was flipped. He instantly started meowing, purring, snuggling, eating, etc. with us around." 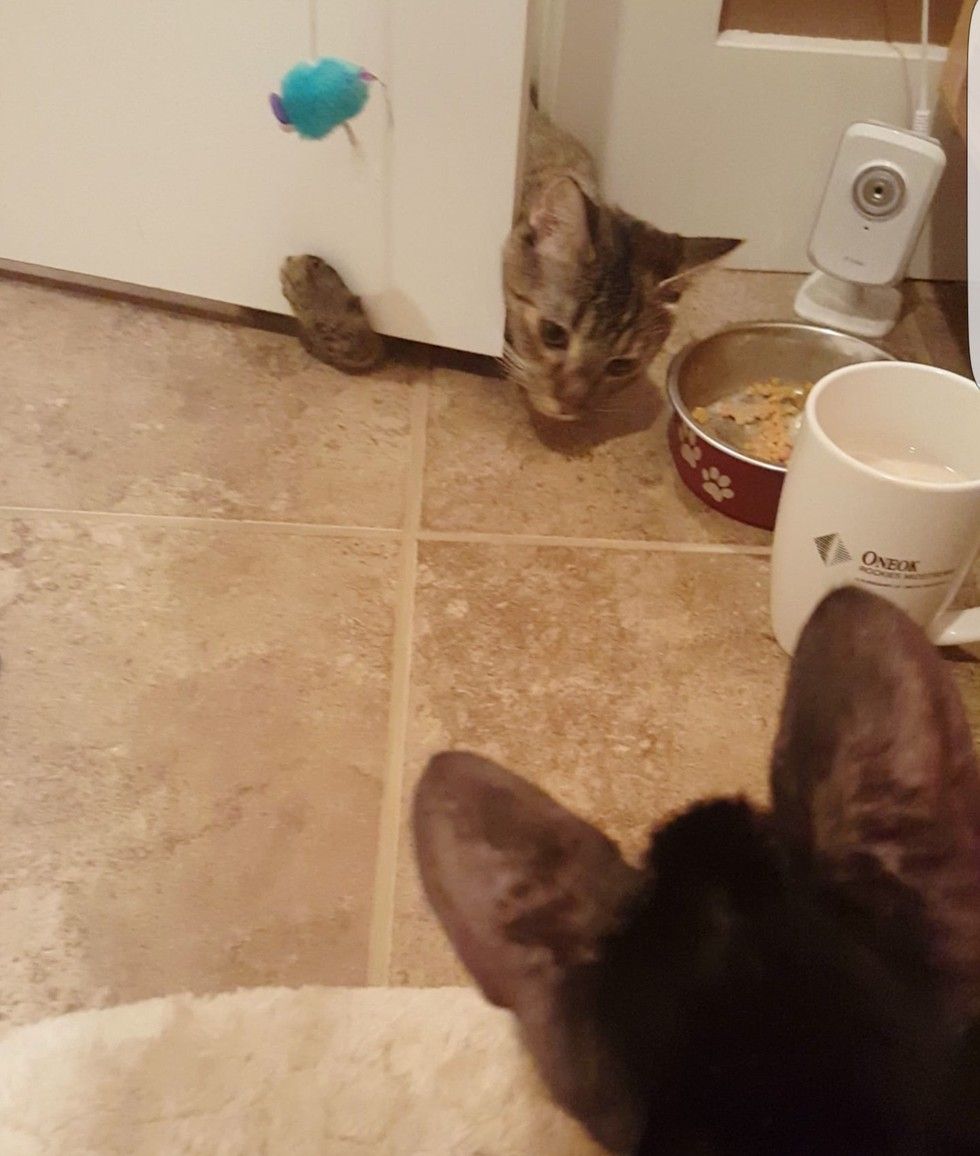 Jedi is no longer scared. He loves spending time with his human dad and mom and even gives them massages on their lap. 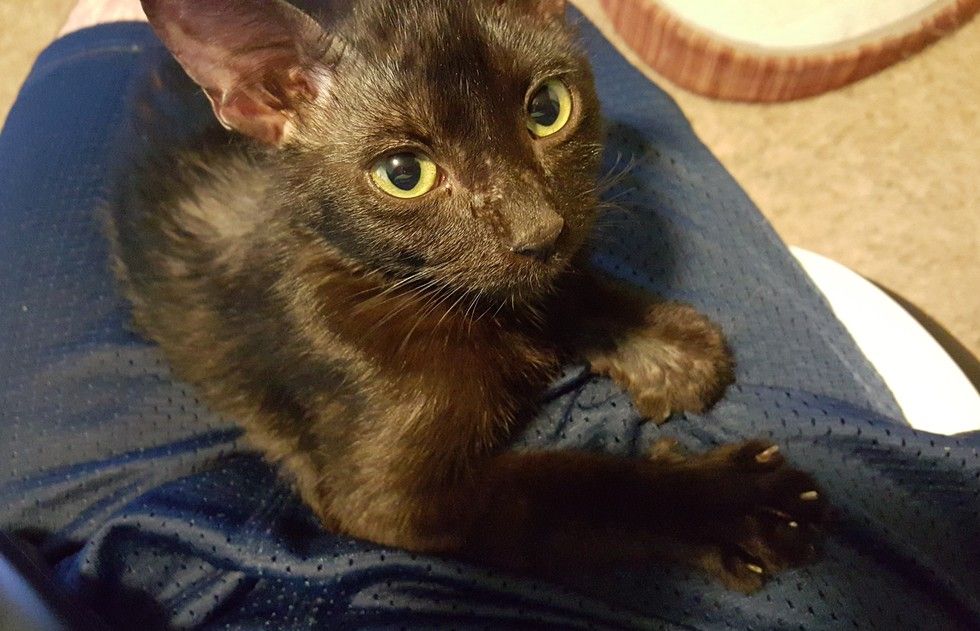 "My legs would fall asleep before he felt like getting off my lap. " 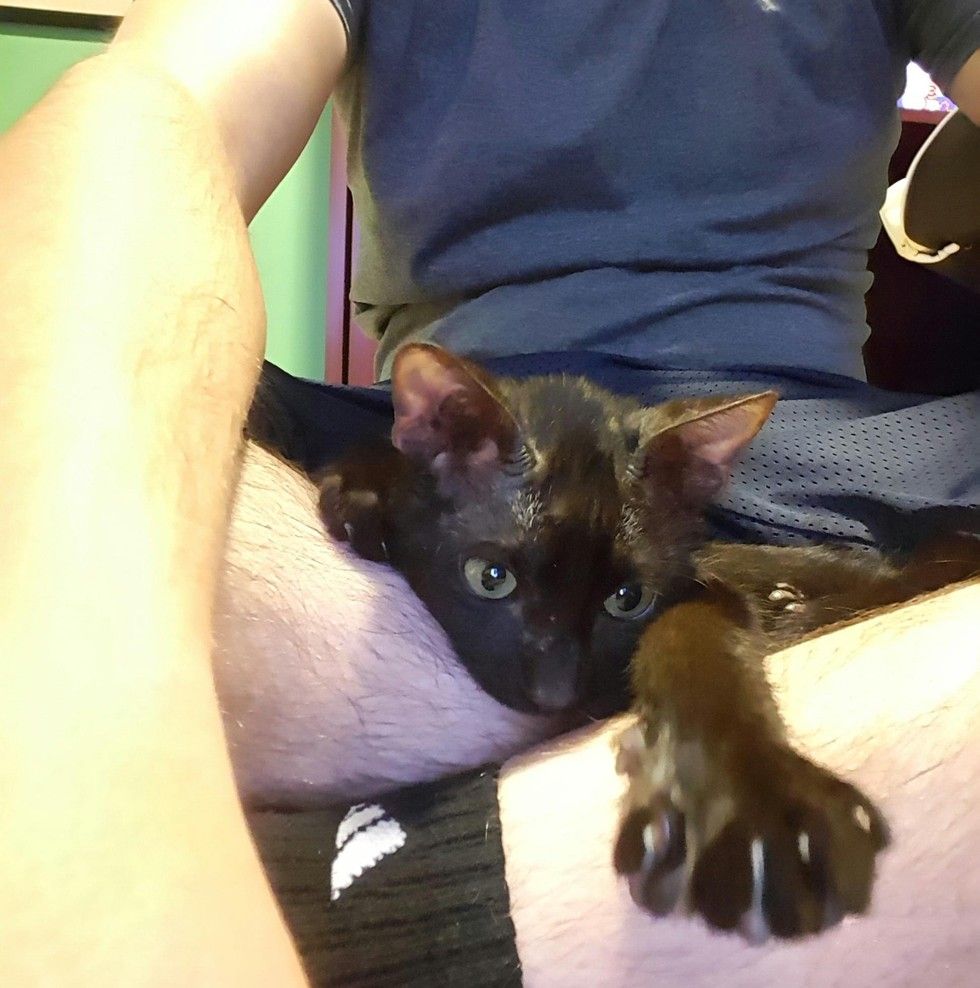 Having dinner together as a family.

Jingle and Jedi are best friends now. "(We) don't usually see one without the other." 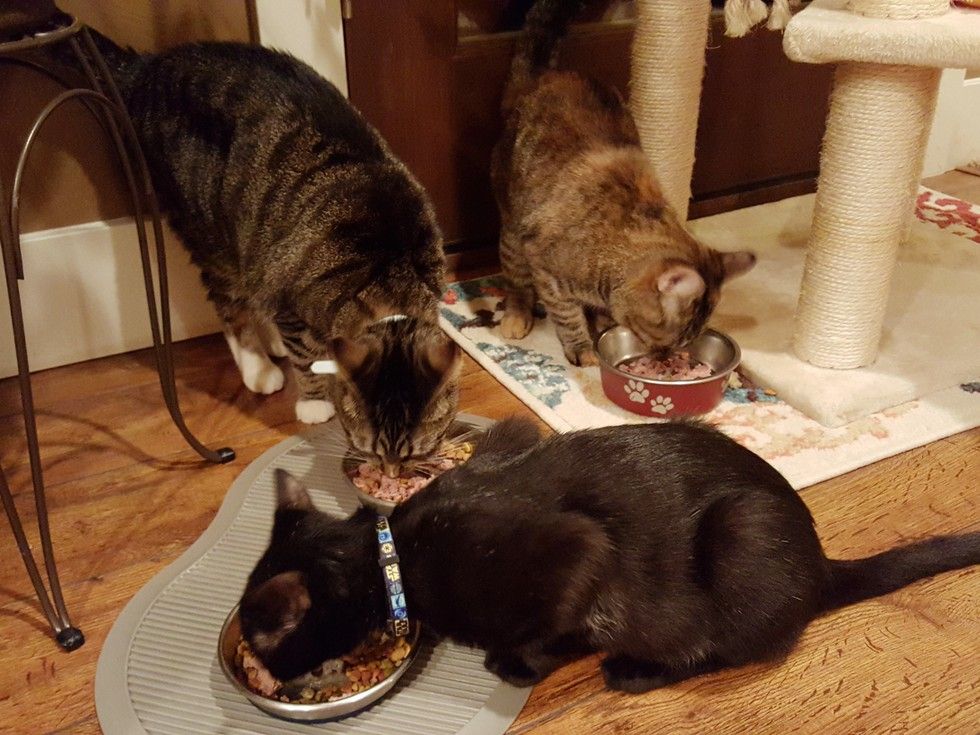 It's hard to believe this is the same skittish cat that showed up on their porch that day.

"Never thought we'd be the proud owners of 3 cats, but now we can't imagine our lives without them." 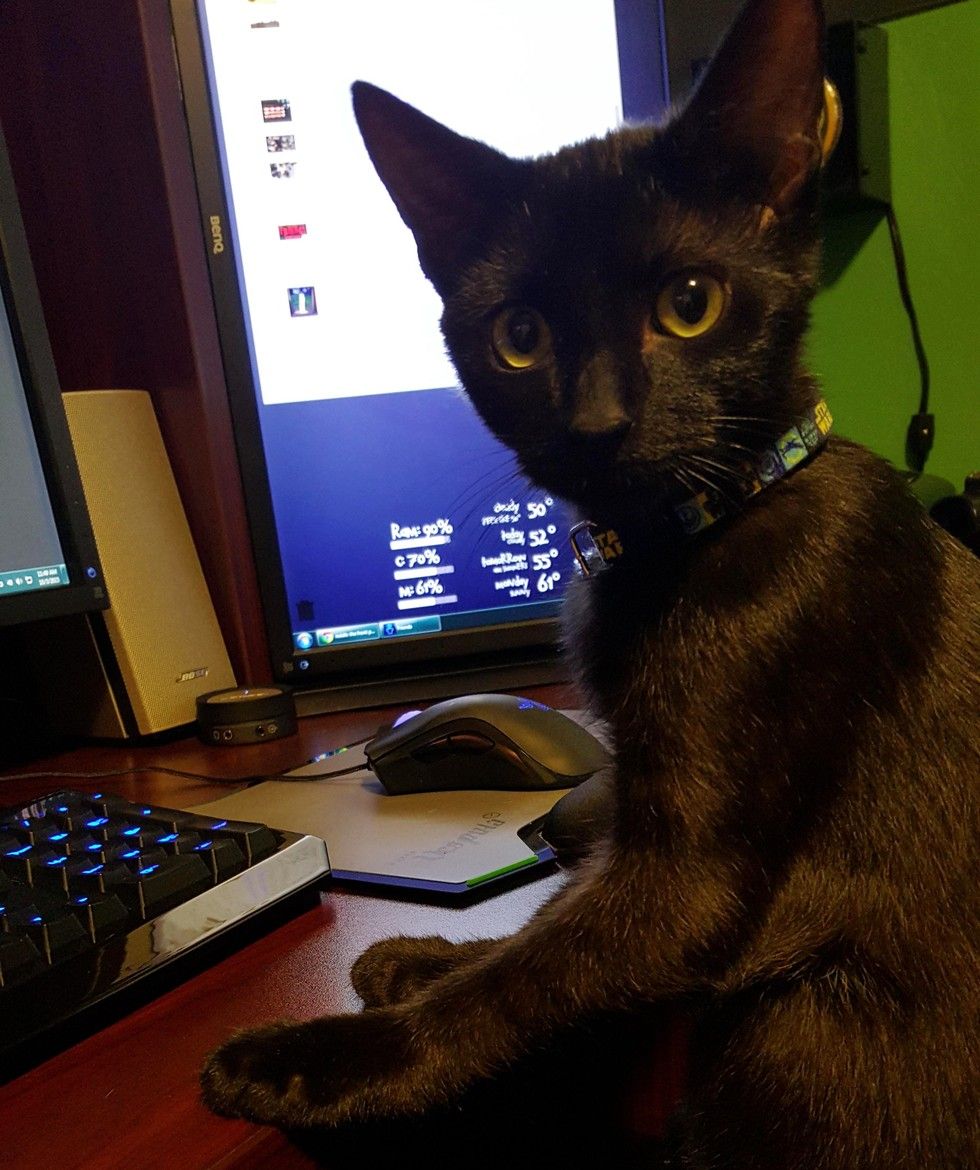 What rescuing can do! Share this story with your friends.