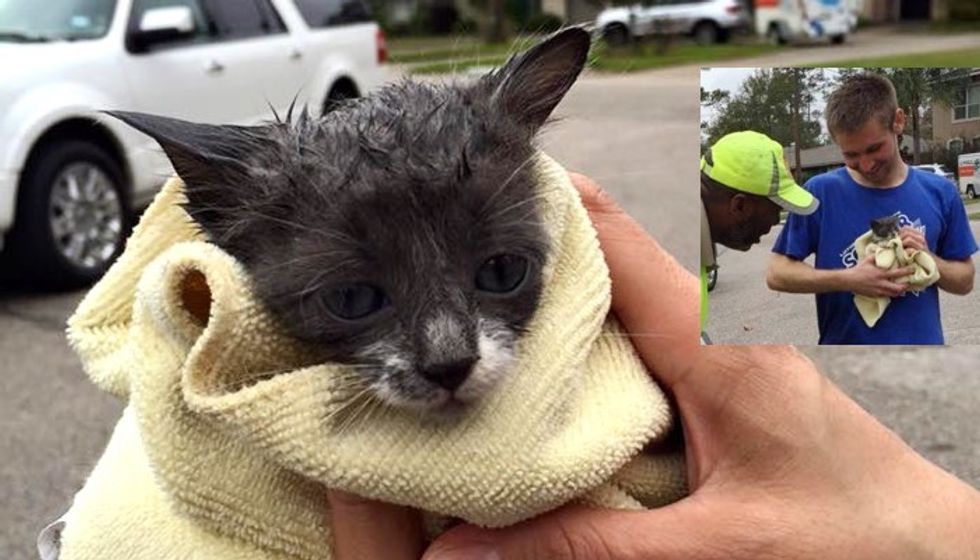 These random strangers got together to save a tiny kitten stuck in a storm drain.

A man heard a kitten crying from across the street as he was leaving the house. He didn't want to go anywhere until he found the little kitten...

"My friend Richard was leaving my house, he's the one that heard (the kitten). He spent a good hour trying to get it out while I made sure he didn't get hit by a car, made calls, posted on Facebook for help. He's a real softie when it comes to cats," Kelly Ingram told Love Meow.

"Slowly a crowd started gathering and then the guy from Public Works showed up," Ingram said.

Lacey Jensen Marek was driving by and decided to stop and offered help. "We needed to get the storm drain open. Once that was open we still could not reach her," Marek told Love Meow.

"I call my friend Catherine Powell who is a vet and traps kittens often. She shows up with a trap and sardines. The poor wet kitten was so frightened and crying. She wanted nothing to do with the food. We tried everything.."

"A doctor or nurse (Naomi) had passed by after seeing a patient in the neighborhood and decided to adopt her if we could just get her out!

Awhile later she showed back up and some young men visiting their friend, one of them, Micah, was brave enough and athletic enough to actually maneuver his way down into the gutter and reach back into the drain to get her. She was about 2 feet back and no one else could get to her," Marek said.

Micah in the drain and Richard assisting.

"The vet (Catherine) gave her a once over and handed her off to the rescuer (Micah) then off to the new momma (Naomi)."

"I think we had a total of 9 of us there. People really are good at heart. We all celebrated and it was a special moment knowing this kitten had a very good life ahead of her. She could've easily been swept away in this morning's rain," Marek told Love Meow

The Public Works man who helped them get into the storm drain suggested they name her "Stormy".

Everything is ok now little Stormy!

What a happy ending! Share this incredible story with your friends!