A palm-sized kitten found help in the nick of time. At five weeks old, he was just the size of a one-week-old kitten. 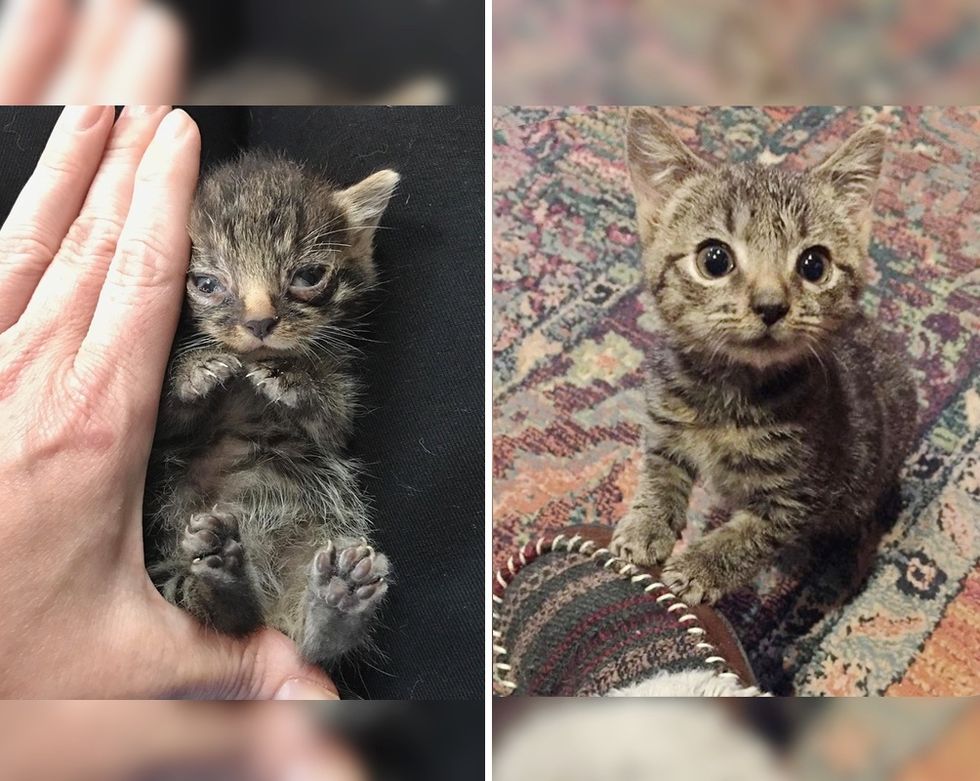 Charles River Alleycats in Boston rescued a litter of kittens from a feral cat colony through a TNR (trap-neuter-return) project. Amongst them, they found a tabby that was exceptionally small.

Heather Fontaine-Doyle of Broken Tail Rescue (an all-volunteer animal rescue) immediately stepped up to help. "When they brought the litter to me, I was amazed," Heather told Love Meow. "The small kitten was about half the size of his siblings and looked more like a little squirrel."

The kitty named Pill Bug weighed only eight ounces at five weeks old. Despite his tiny stature, he displayed an incredible fighting spirit and tried to do everything just like his much bigger litter mates. 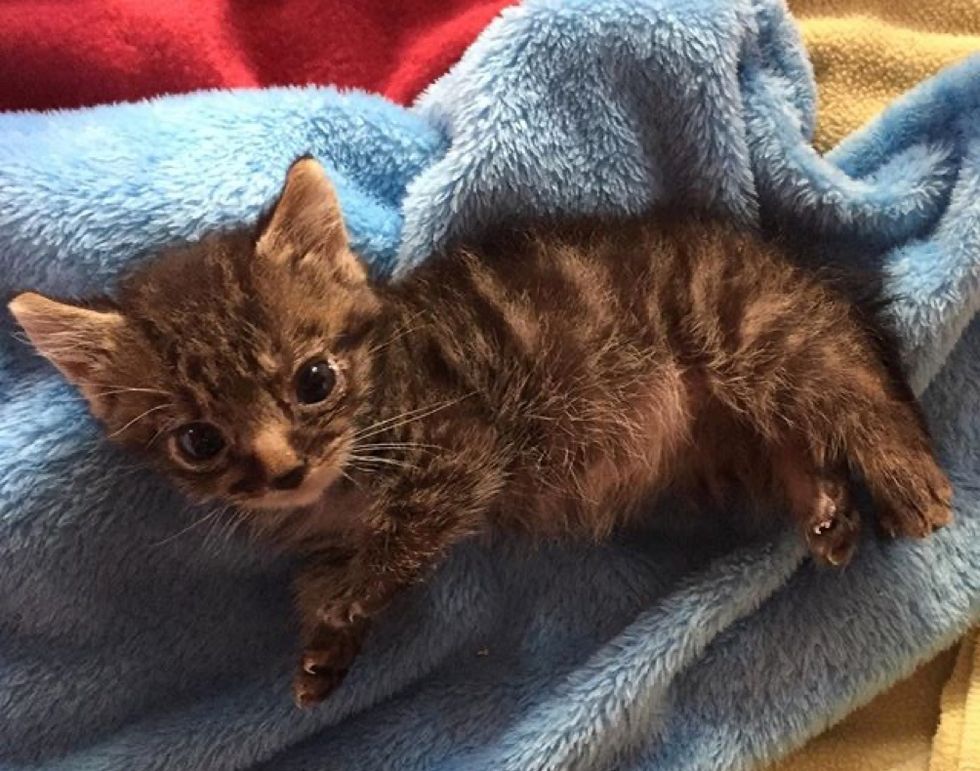 "Based on his teeth, we ruled out the idea that he was younger than the other three kittens," Heather added. "He was just teeny tiny and his limbs were so short."

A week into his foster journey, Pill Bug's condition worsened and he was in need of lots of supportive care. Heather worked around the clock, feeding him with a syringe, keeping him hydrated, and staying up with him to reassure him that he was loved. 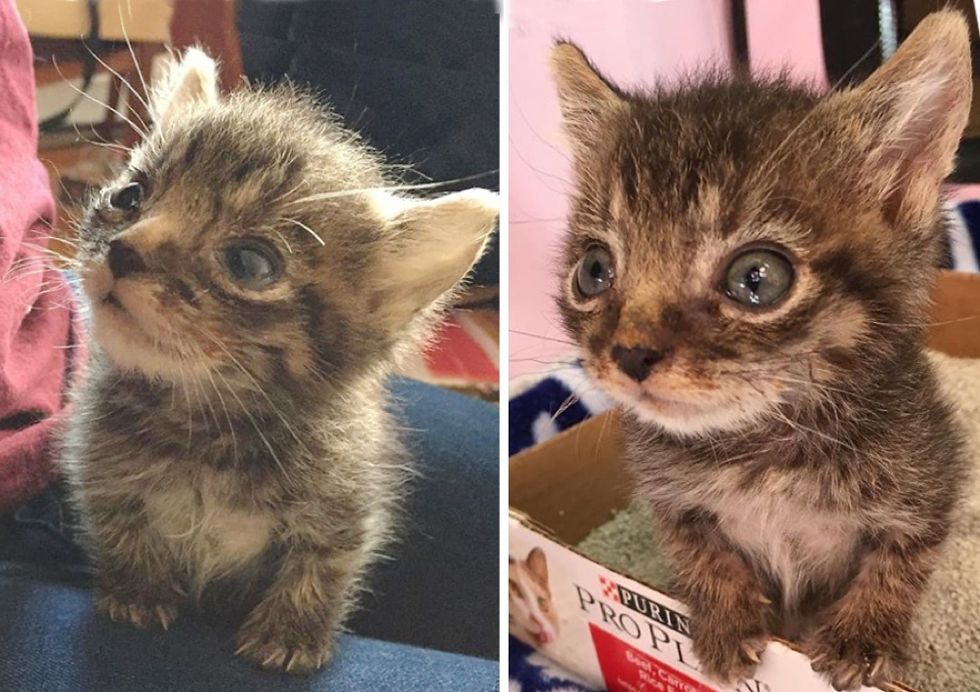 "It took almost a week until he started to turn a corner for the better," Heather shared with Love Meow. "He became interested in people, in his toys, and in my other cats."

Slowly but surely, the tabby started to put on weight. Heather brought him along everywhere she went so the kitten could be fed and cared for hourly. 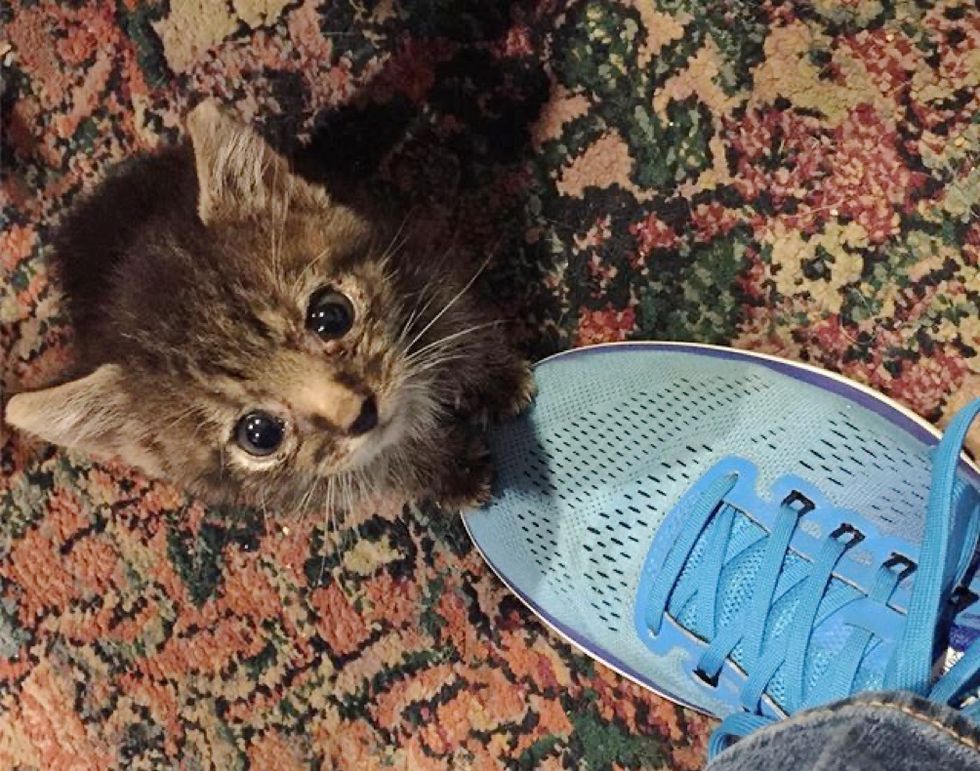 Pill Bug was officially diagnosed with congenital dwarfism. His growth was at a rate of about half that of a normal kitten. "I think we knew all along that he was probably a dwarf cat, especially when it took him until he was nine weeks old to hit one pound!"

The little guy has an overbite and a short jaw, and will need dental procedures to ensure quality of life. "He cannot extend or retract his claws, and his spine is somewhat stiff and inflexible." 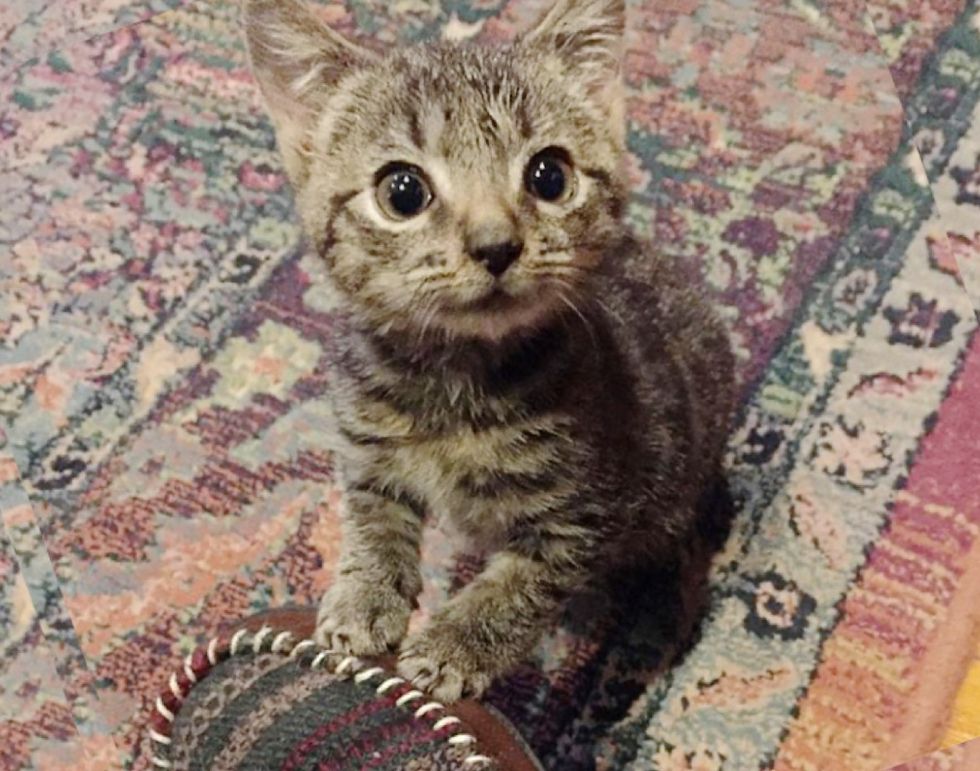 Despite his physical limitations and petite size, the tabby is incredibly playful and seeks attention from his humans whenever he gets a chance. If he spots a paper bag, he'd try to wrestle with it. No toy can escape his keen eyes. The fearless cat will pounce and go after anything that moves.

Watch his foster journey in this cute video:

The rambunctious little kitty never misses out on the action.

To help him improve his range of motion, they give him regular physical therapy and plenty of exercise that he loves. 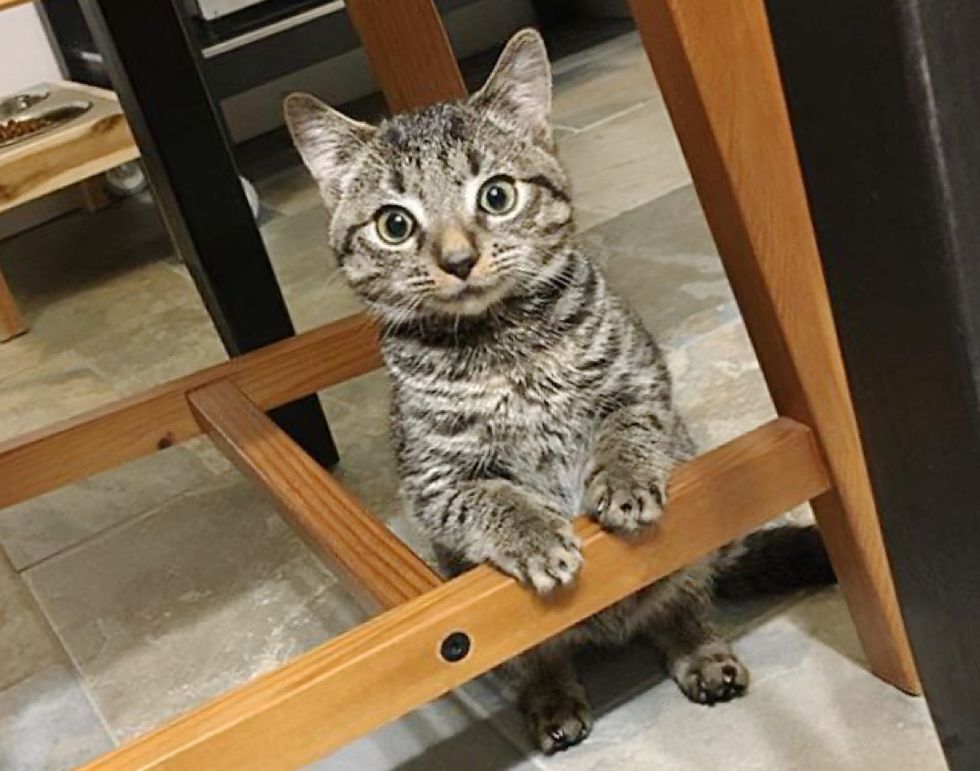 "He gets the zoomies and he really likes being held propped up on my shoulder," Heather said. "When it's meal time, he runs for his food dish. He's fast!"

Pill Bug has really blossomed over the last several months and turned into a little love-bug. He's still much smaller than other kitties his age, but what he lacks in size, he surely makes up for in his larger-than-life personality. 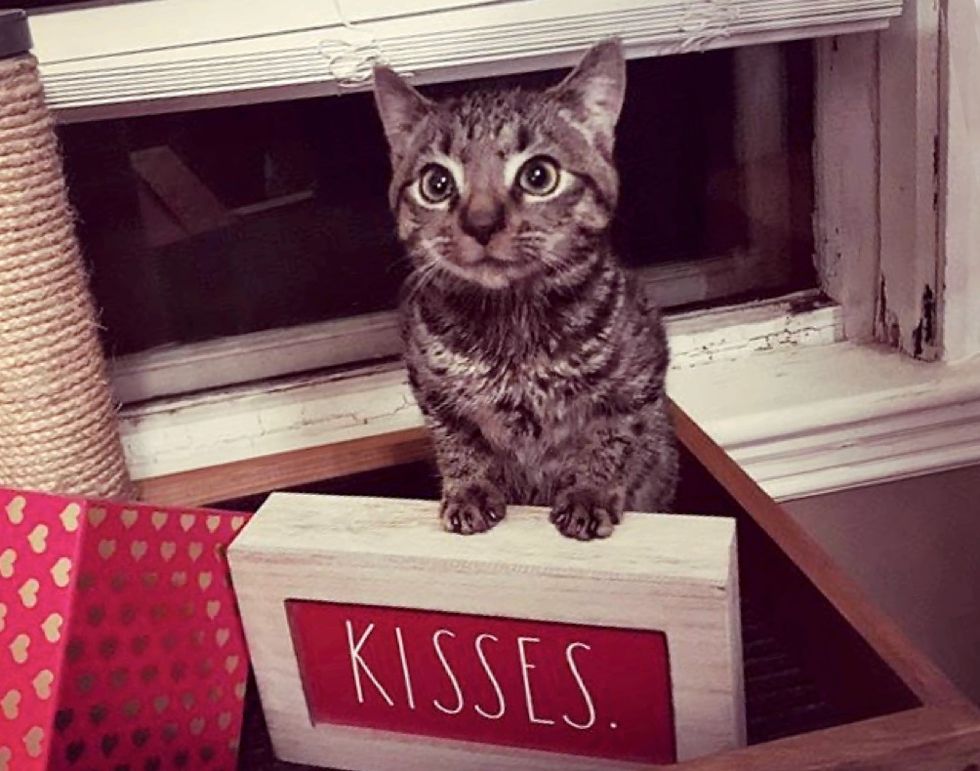 The tabby loves to climb the cat tree even though he is not a deft jumper. His foster family has built a small staircase so he can get up to higher grounds with ease.

He's found his favorite perching spot to help him survey the house. 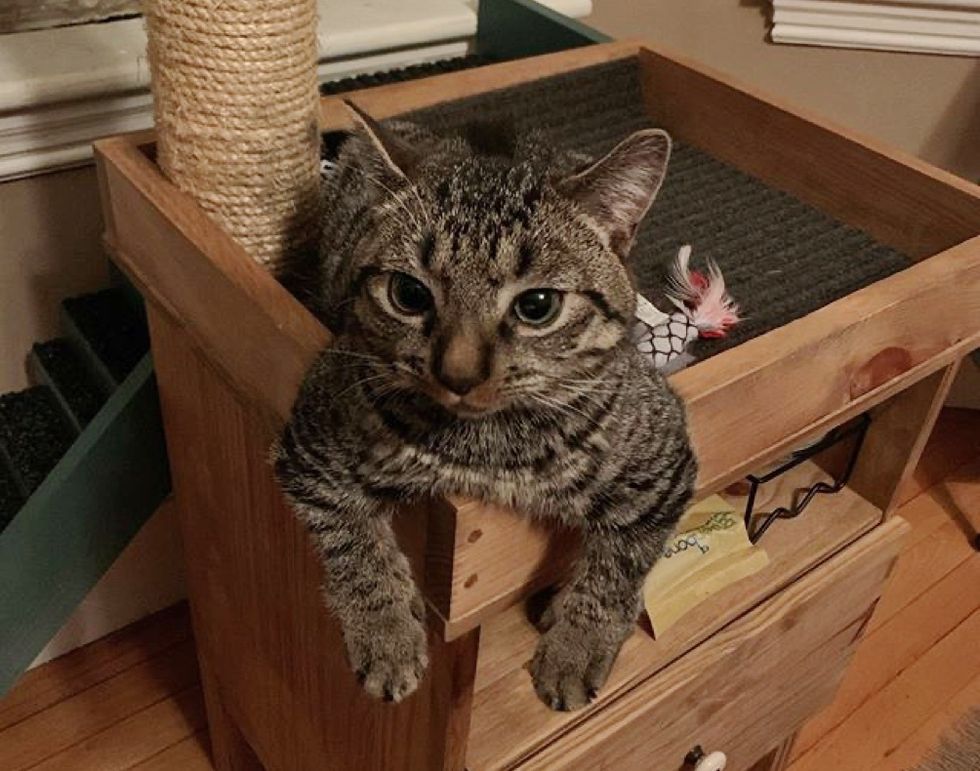 As soon as Pill Bug spots a toy or a swishing tail from another cat, his eyes light up and he's ready to pounce.

He enjoys lounging like a little person, leaning on a chair, between play sessions. 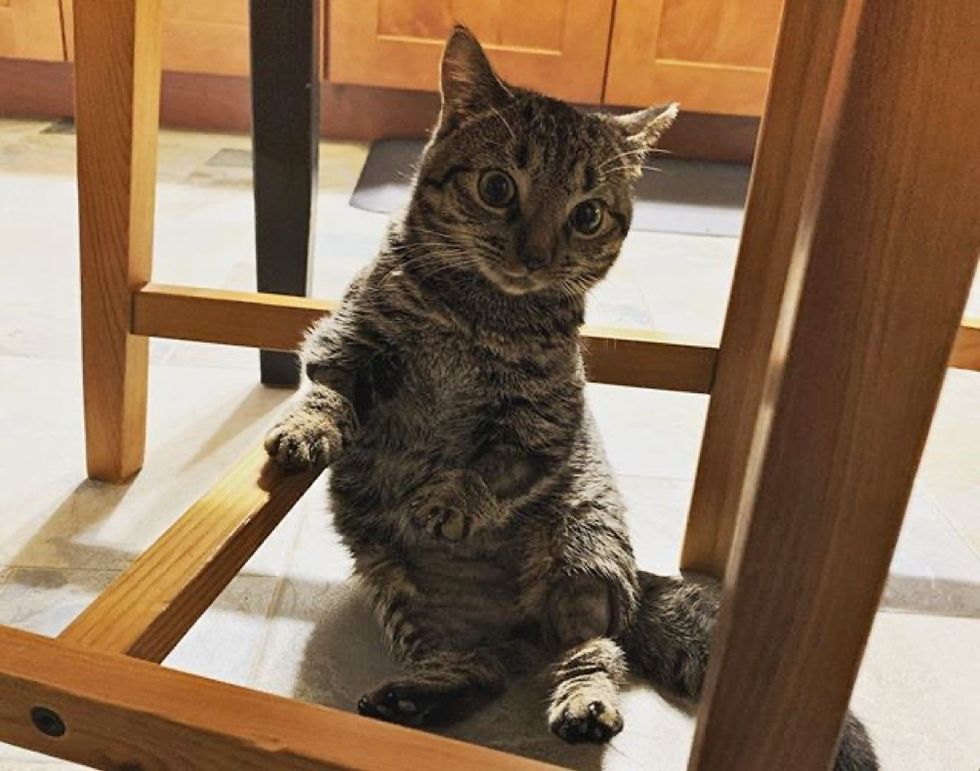 The sweet kitty just turned one year old. His loving foster family celebrated this incredible milestone with a birthday cake made of his favorite cat food and treats. 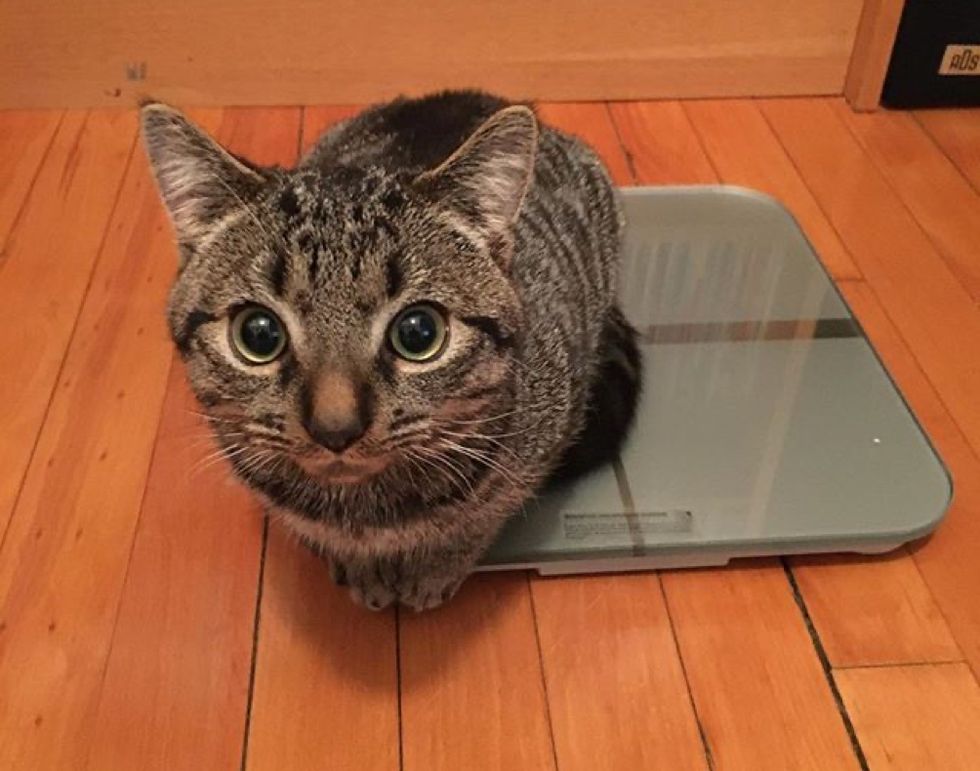 "It was a rough start to life but Pill Bug has been fortunate to have so many people who put the effort in to get him to be the happy, healthy little man that he is." 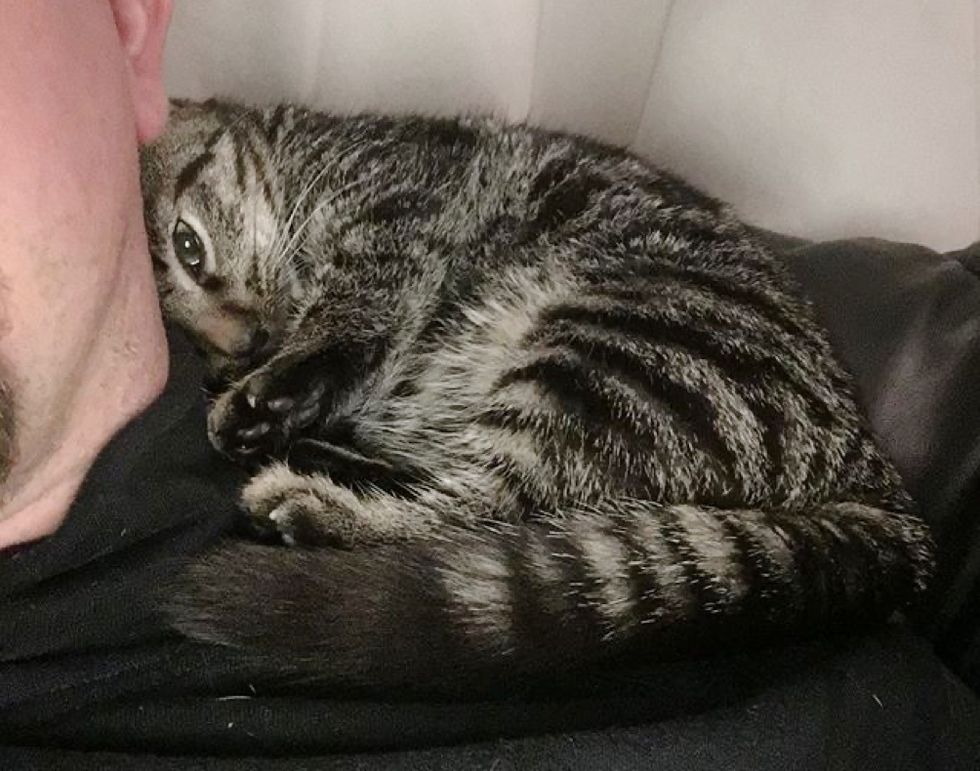