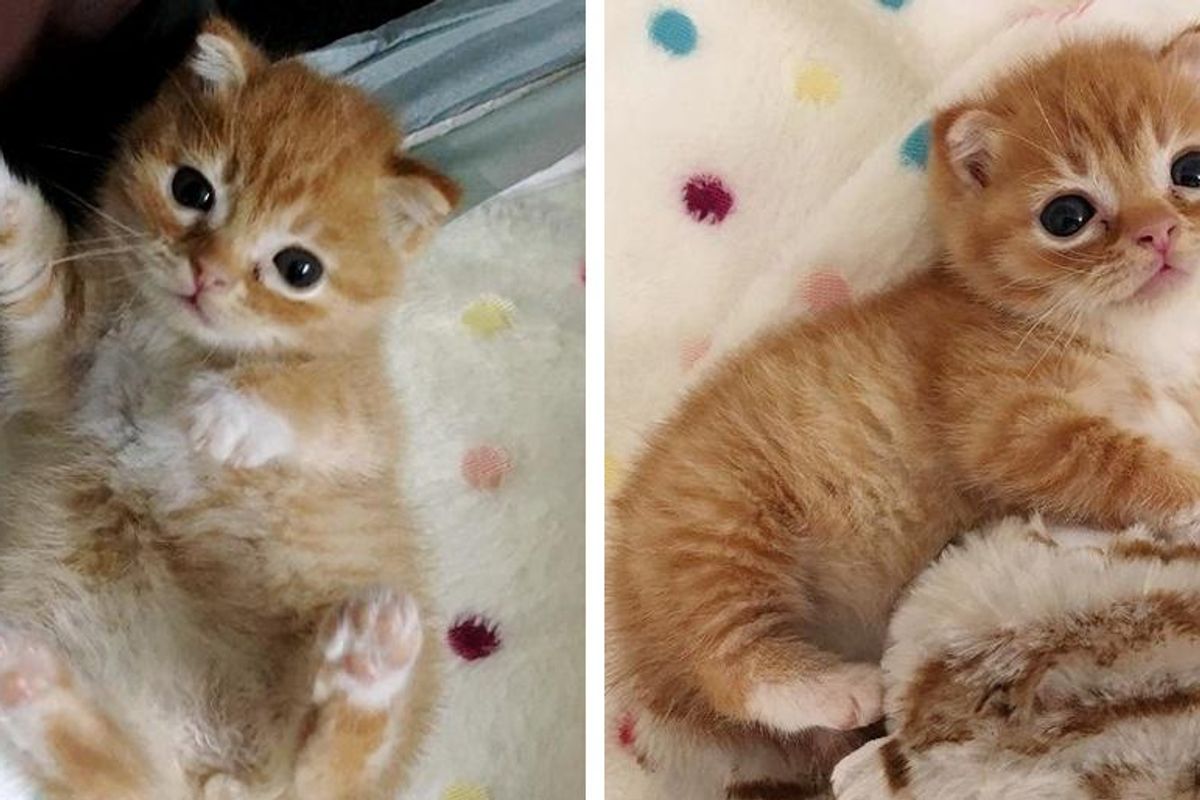 A tiny kitten was born with a rare condition. He let nothing stop him and blossomed into the happiest cat. 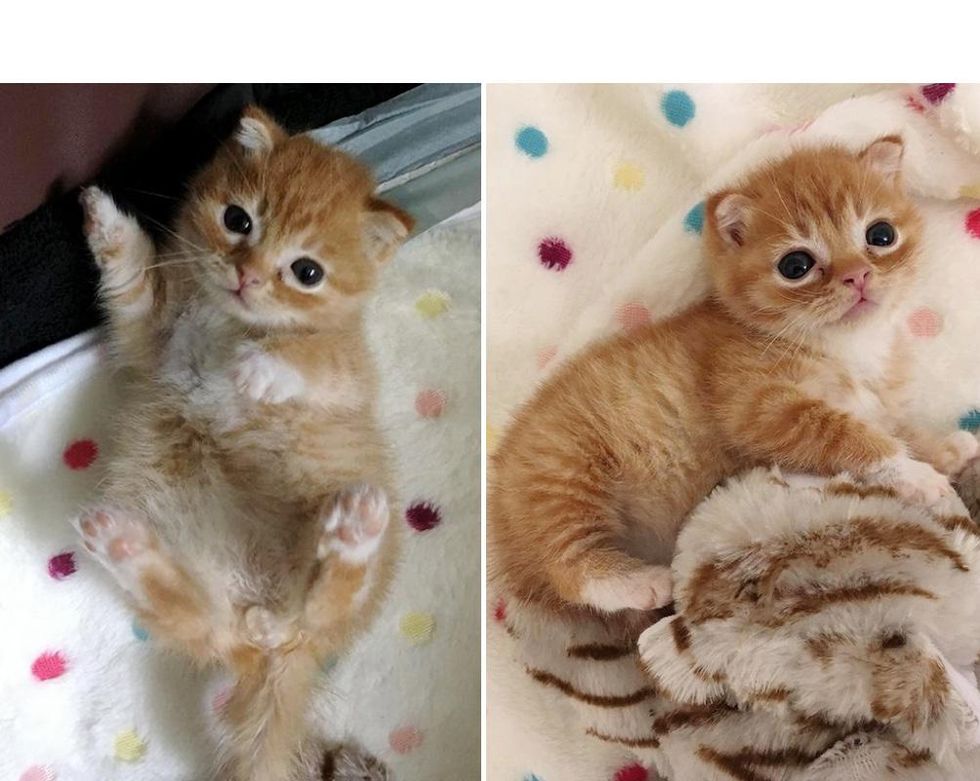 Penny Richards, a fosterer based in Northern, Virginia, came across an online listing about a kitten needing rescue. A kind-hearted lady found him alone in her yard and brought him inside when the cat mom never came back for him.

"She had been trying to care for him for a few days, but didn't know what to do," Penny told Love Meow. "If she had not taken him in, he would not have survived."

Penny reached out to the finder and offered to help. When she got the kitten, she immediately noticed something different about the tiny bundle of fur. "He was very rounded, and a little oddly shaped for a kitten." 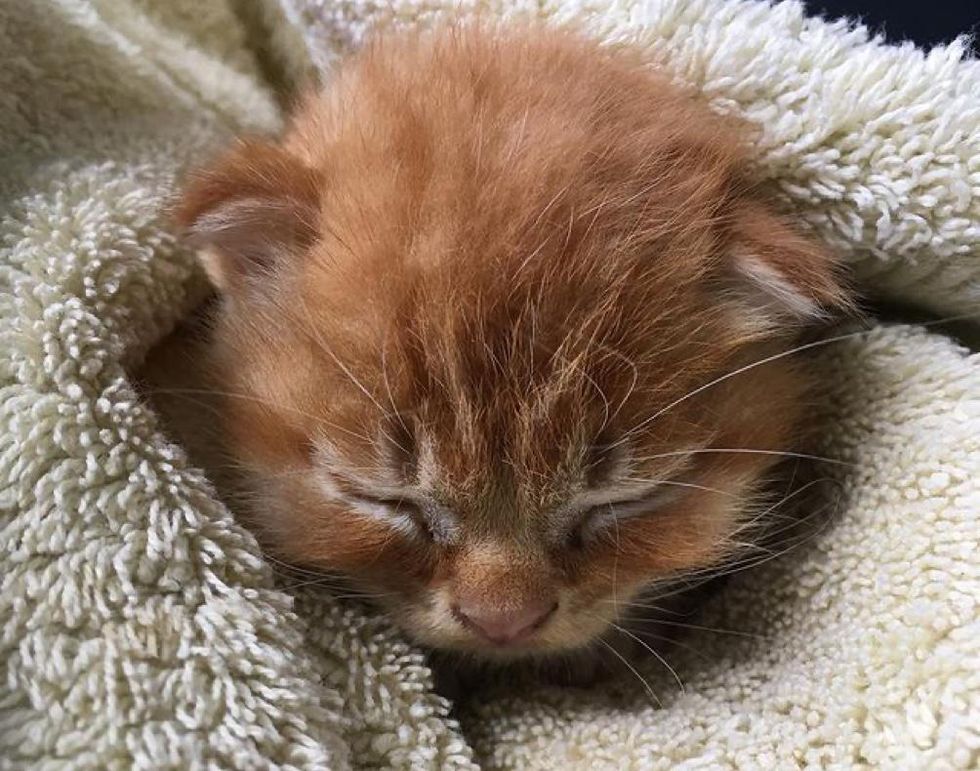 The kitten named Leo was so thankful to be cared for. He had trouble latching to feed, and seemed to have other health challenges. "He appeared to have no interest in eating whatsoever, regardless of the time between feeds, but also looked like he struggled with it."

Penny began feeding him drop by drop via a syringe around the clock, and brought the little guy back from the brink. 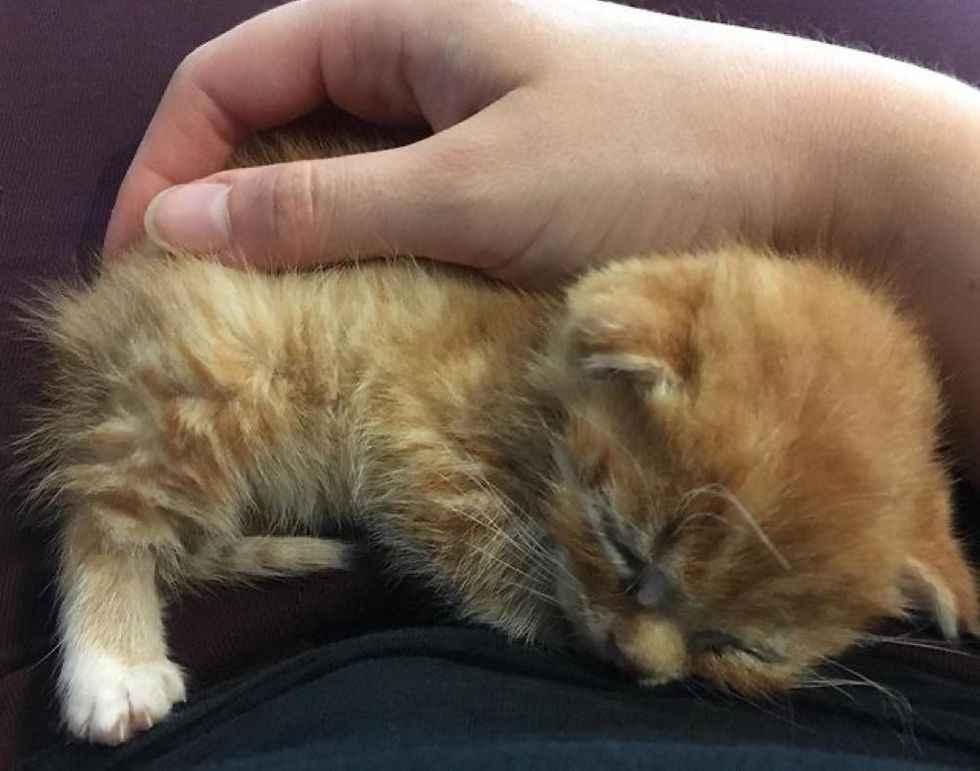 With painstaking care, meds and new food, the kitten's appetite increased and he started to perk up. Once his nose was clear, he began sniffing all the new scents around him. "I would hold him and he would spend ages just sniffing my face or my hands, with his tiny little nose."

At night, he would nuzzle into his faux mama, the heartbeat cat, or curl up in the arms of his foster mom before purring himself to sleep. 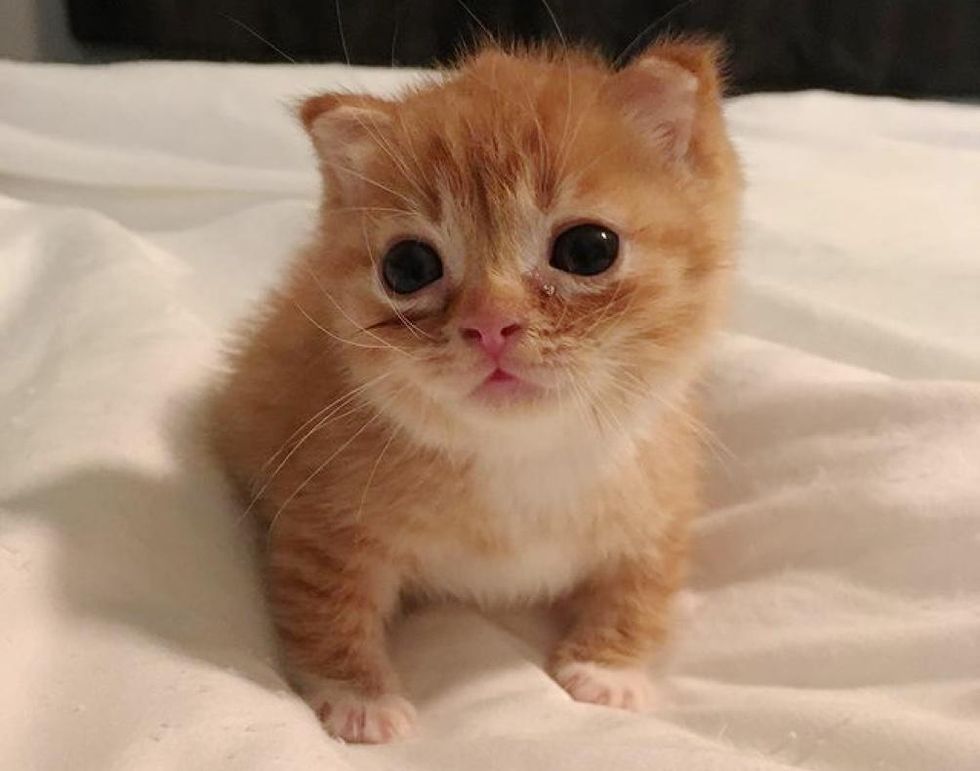 As he got stronger, he snuggled even harder, burrowing his little face into the fuzziness of the toys. As soon as he got strength in his tiny legs, he was motivated to waddle around, checking out his surroundings.

"As the weeks went on, I noticed that he wasn't developing right. His ears strayed flat and his teeth were not coming in at all at six weeks old (Kittens usually get their teeth around three weeks of age)." Penny told Love Meow. 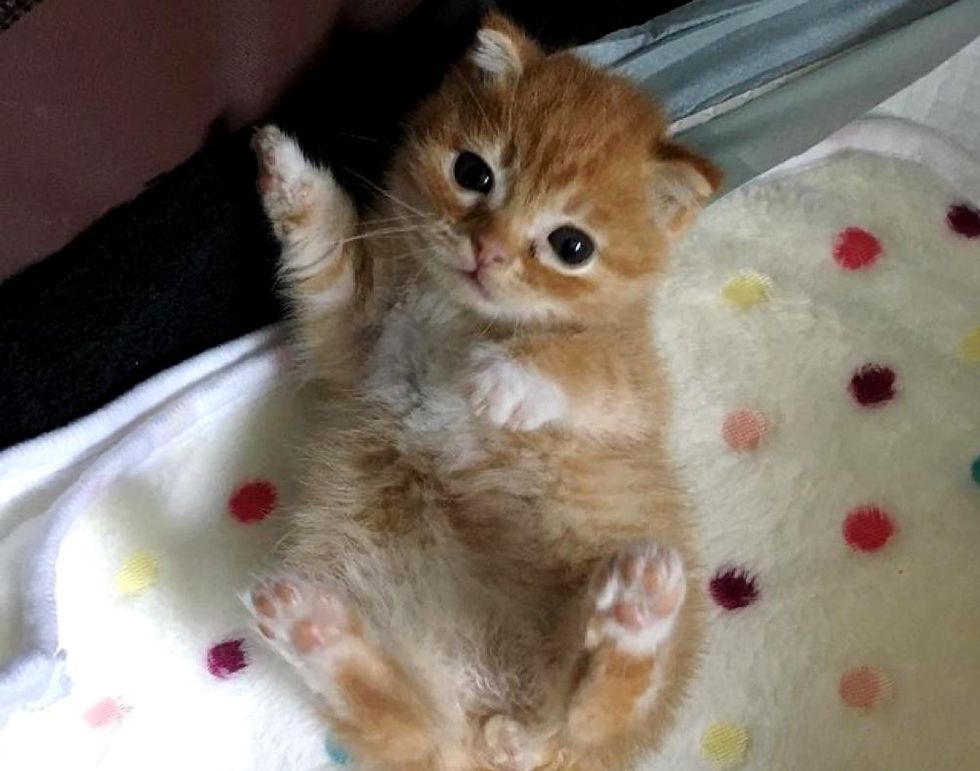 Despite being half the size he should be, Leo was always in good spirits and just wanted to play and explore.

"He was an incredibly happy guy from the start, always purring and walking around with his weird cross-legged walk. He loved to roll over, and was always sleeping on his back."

After being checked out by a specialist, the kitten was officially diagnosed with hypothyroidism, a rare condition in cats. 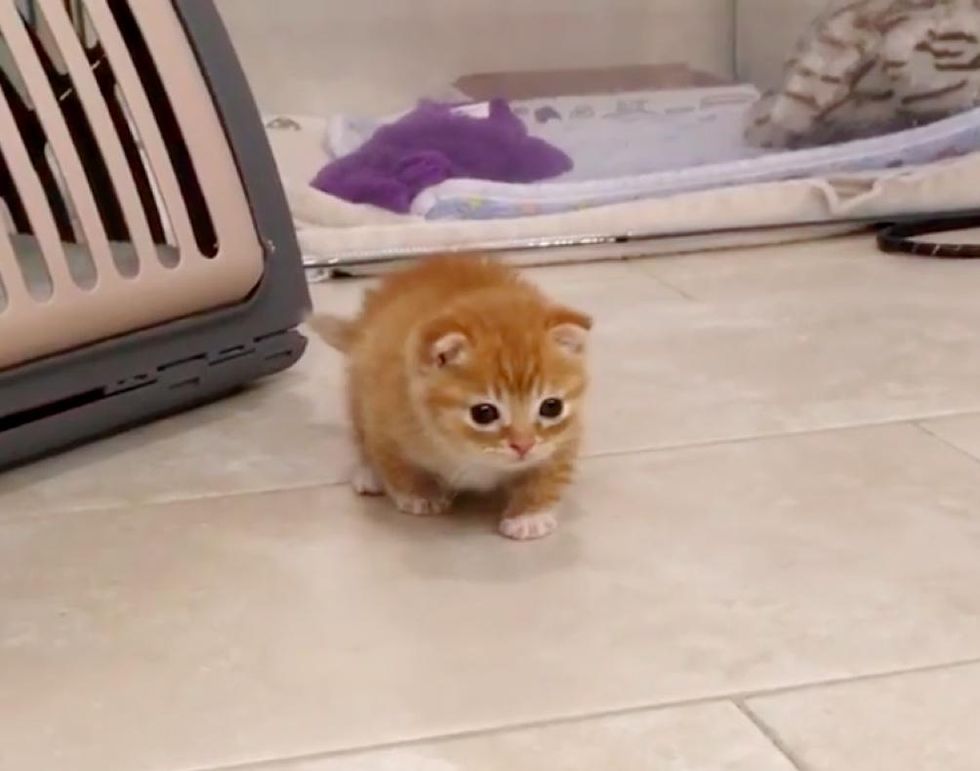 "Hypothyroidism inhibits cognitive development as well as physical development, so he's always been 'special'," Penny told Love Meow. "This condition caused him to have developmental delays, amongst other symptoms."

"He had short limbs and a round body. He also had a broad head with more of a squashed face than most cats. His hypothyroidism is definitely congenital and I think that his mum left him behind because he couldn't latch due to an odd sized tongue." 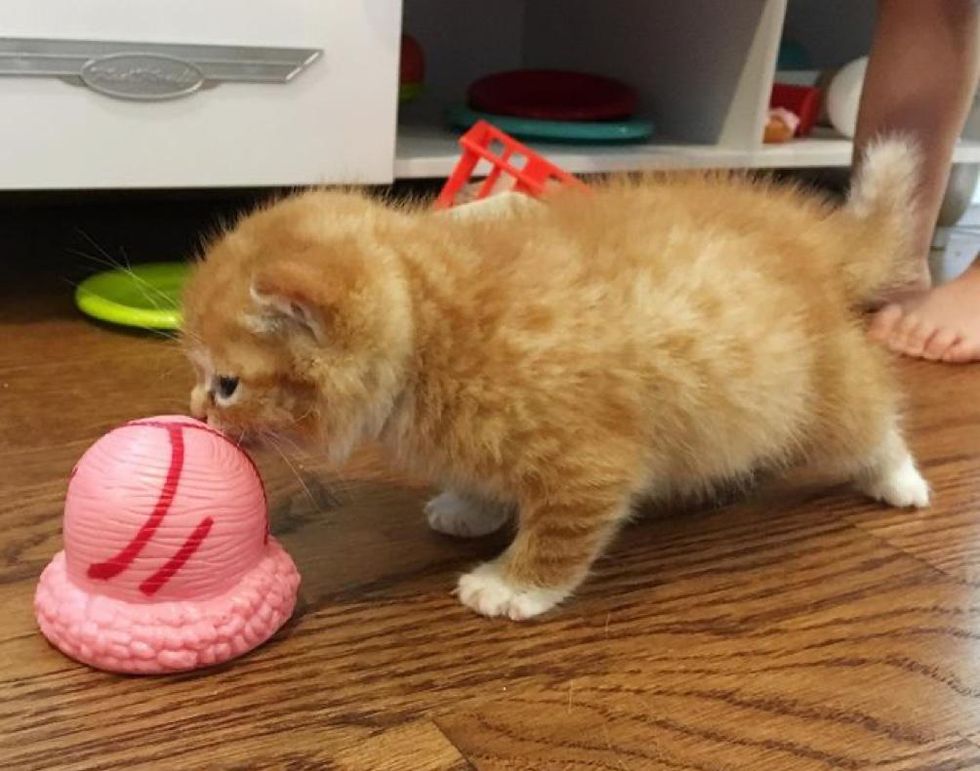 They started Leo on thyroid medications and began to see improvement. "He eventually became more of a cat, and less of a potato. He also started to learn how to use the litter box, how to drink water, and how to eat solid food - although all of this took a lot longer than a 'regular' kitten."

As soon as Leo figured out how to eat from a dish, he happily devoured multiple meals throughout the day. His weight began to climb rapidly and his energy soared. With help from the right medication, the kitten's teeth finally came in.

Despite being a bit uncoordinated, Leo let nothing stop him from playing and running around the room. "He couldn't jump properly, and didn't know how to drink water from a bowl until he was almost three months old." 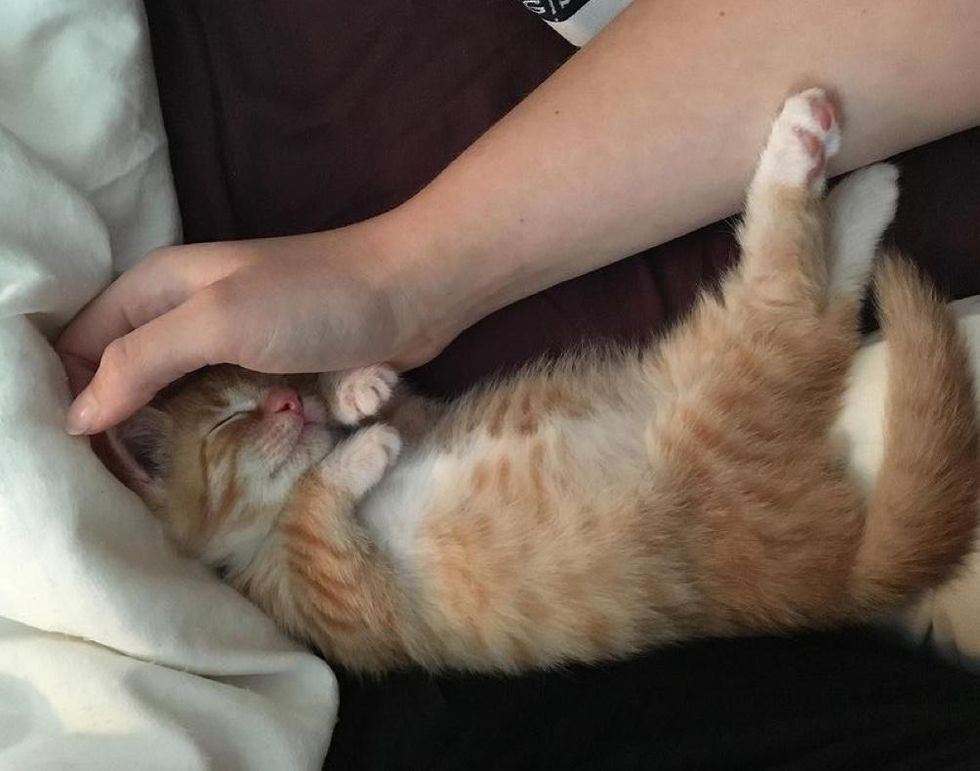 The kitten required so much round-the-clock care and small meals throughout the day that Penny kept him by her side and took him to work every single day. As Leo continued making strides in his development, he was getting increasingly more curious and active, and his personality began to emerge.

At 10 weeks old, Leo reached the 2-pound mark. His sight and hearing had caught up and he was working hard on honing his climbing and jumping skills. 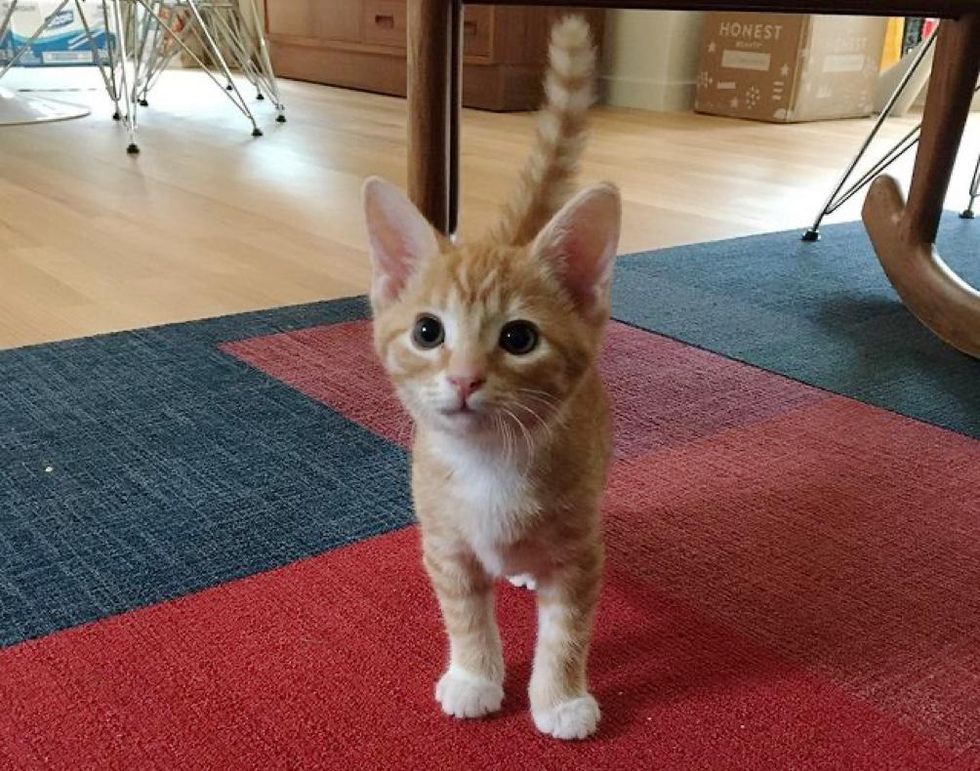 Over the next few weeks, the tabby boy really blossomed and was getting closer and closer to being ready for his next chapter in life.

"I had an incredible couple reach out to me about adopting him, so at almost four months old once he was developed enough and we had his thyroid levels stable, I adopted him out to them," Penny told Love Meow. 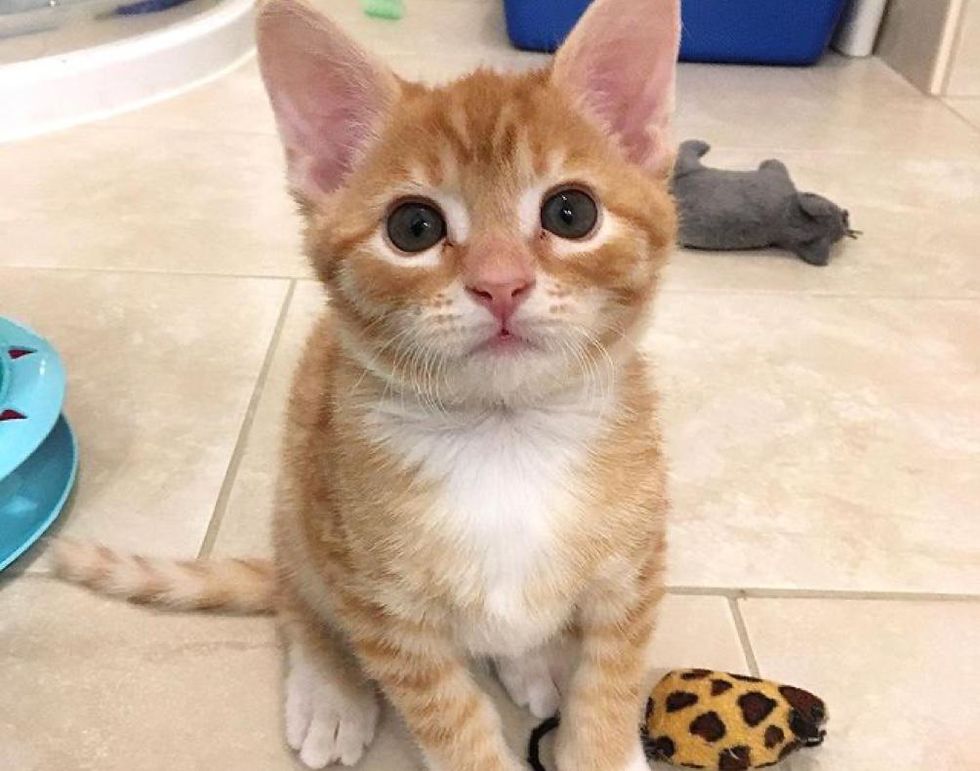 The family showers Leo with unconditional love and gives him the best care to ensure his quality of life.

"He runs into things all the time, he almost never lands on his feet, and he can't jump, but none of that slows him down one bit," Leo's forever family wrote. "He will immediately fall asleep practically any time you put him on his back." 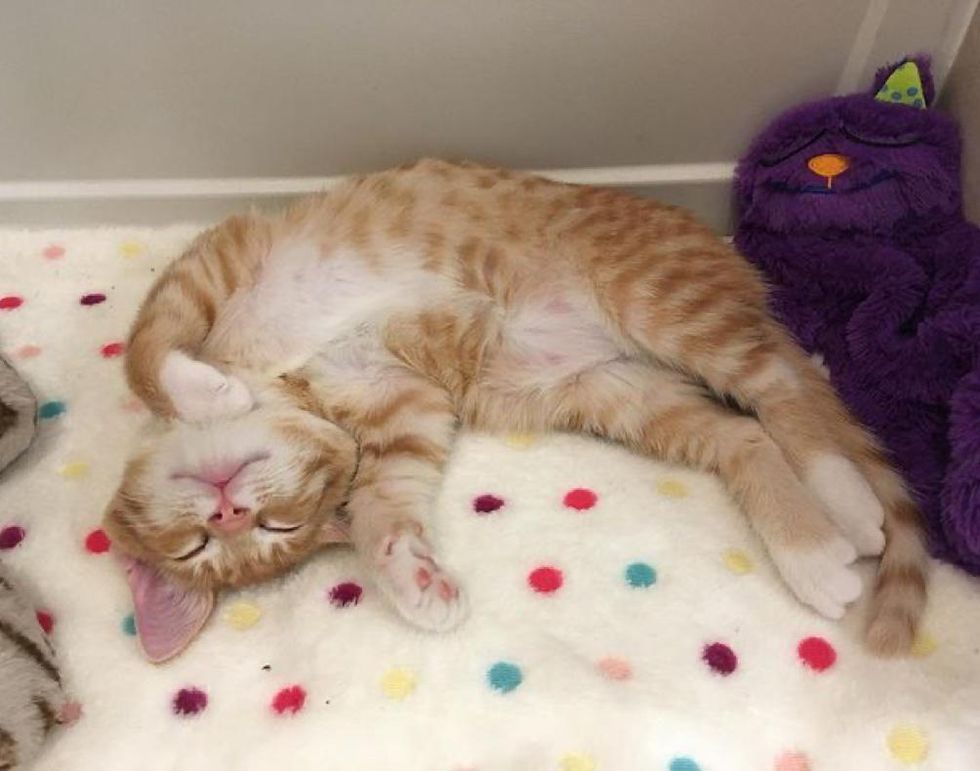 "Leo battled through so much after being found alone at one week old. He has always been the happiest, most loving, and most playful, goofy boy, always purring and cuddling," Penny shared with Love Meow.

"Now, he is best friends with his dog brother in his new home." 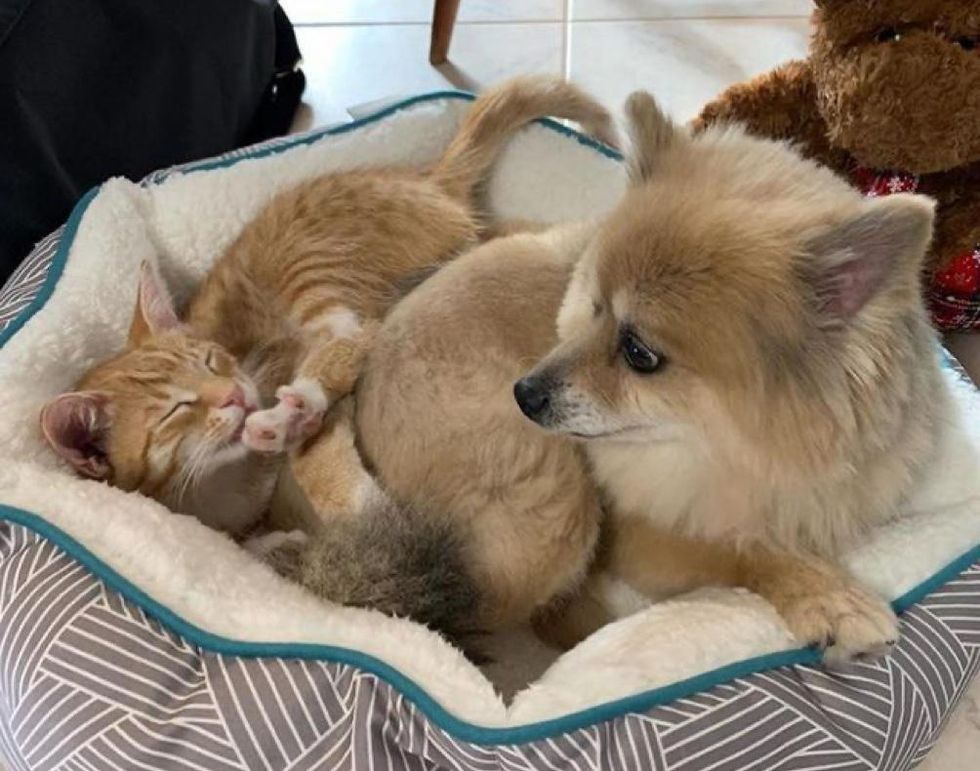 "I am so happy to have watched him grow from a challenged potato into this small cat who loves life!"

It's been a year since Leo's adoption. The tiny ball of fur has blossomed into a handsome tabby cat. 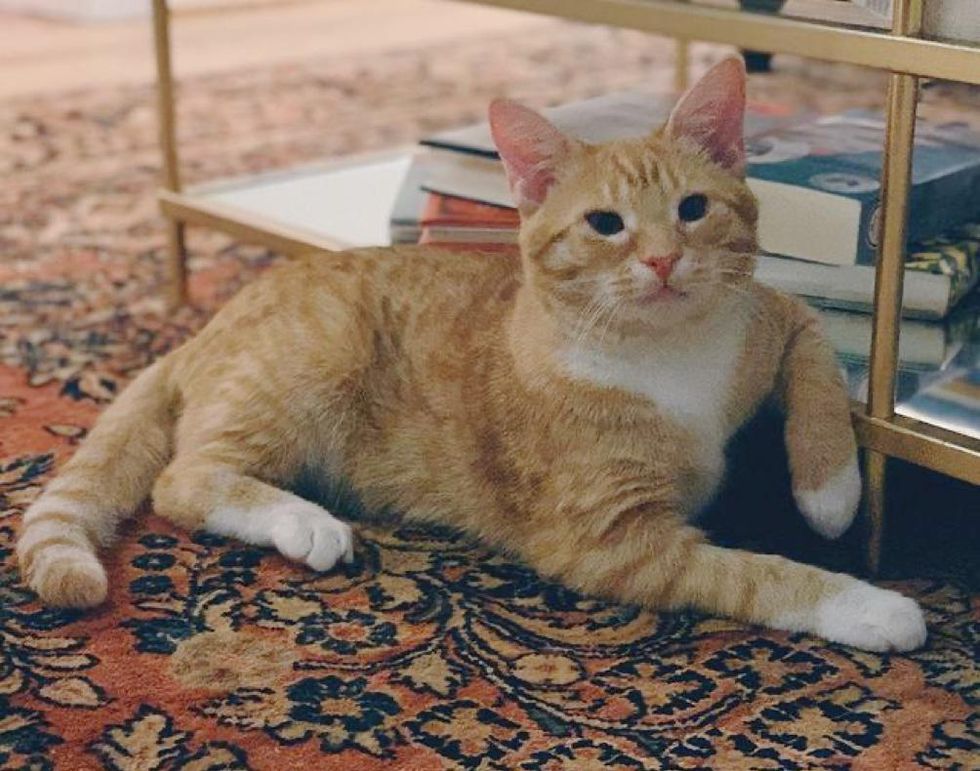