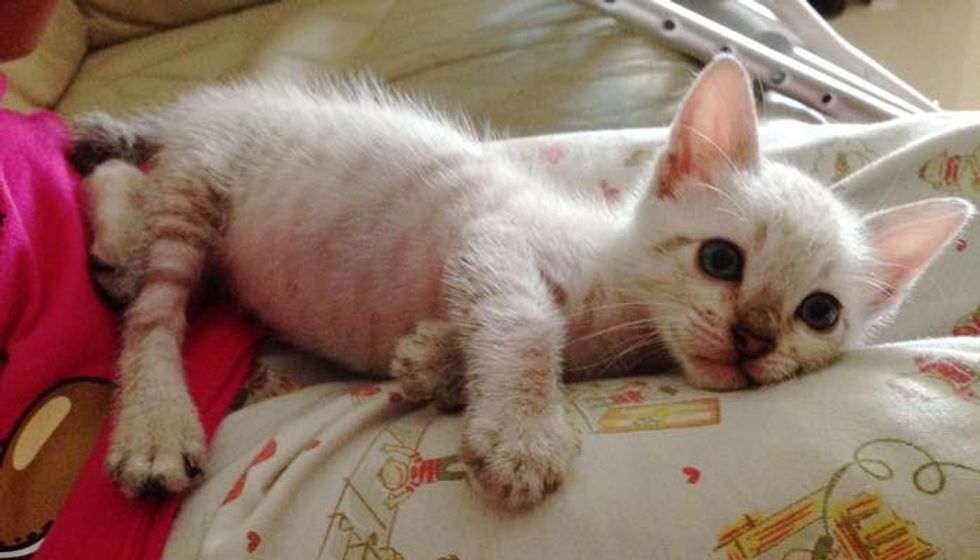 A tiny rescue kitten helped a girl with a broken leg heal. Now a cat, he is still looking out for her like a brother would.

Noisy was just a few weeks old when he was brought to a home where he met Sarah a girl who was recovering from a broken leg.

"He had such a loud voice for such a wee thing and hence the name!"

Noisy and his siblings rescued from a factory. They were all adopted. Courtesy of Sabrina Majid

Majid hoped that having Noisy in the house would help their daughter heal and lift up her spirit, but what they didn't expect to see was how close they became.

Noisy stayed close by Sarah the entire time while she was recovering from her broken leg.

"He's very affectionate and playful and he's best friends with my girl!

"Even when he was just a baby, he somehow knew she wasn't well and he slept on her tummy all the time. Now that he's bigger, he still does it every day," Majid told Love Meow.

Noisy helped Sarah heal and kept her company when she needed a friend.

Now all grown up, this sweet cat shares a special bond with his human sister.

"Recently she was at a school camp, Noisy lost his appetite, and he kept walking in and out of the rooms looking for her!"

"The moment she returned, he didn't let her leave his sight. I believe he's looking out for her like a brother would," Majid told Love Meow.

Sarah showing Noisy pictures they took from the school camp. Best of friends!