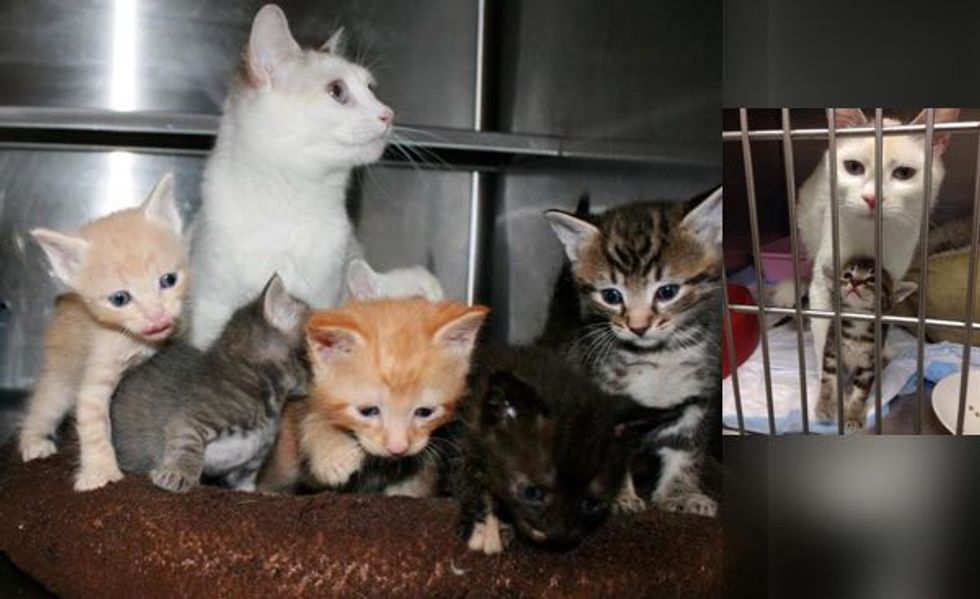 Rescue stray cat mama and one of her kittens at the Potsdam Humane Society in New York.

A pregnant stray cat gave birth to three beautiful kittens at the Potsdam Humane Society in Potsdam, New York, but now she's nursing six very hungry kittens and caring for them like a champ!

"She was a mom that was surrendered to us pregnant because she showed up as a stray to someone's home and they could not give her the attention she and her kittens would need," said the Potsdam Humane Society, a no-kill shelter that has been providing love and humane care for unwanted, abandoned and sick animals for more than 50 years.

She was found as a pregnant stray and taken to the Potsdam Humane Society.

"Three days after her kittens were born we received four stray kittens found in the road and their mother had been hit by a car. She was such a sweet mom that she took them right under he wing and showed them where to go to get food and started cleaning them immediately."

One of the babies!

"One was not fortunate enough to make it but the other three are very healthy and doing great just like her three kittens."

Both groups of kittens are four weeks old and they will be available for adoption in about four weeks.

That's one big furry family and a very busy mama! No worries though! Mama gets plenty of help from the volunteers at the Potsdam Humane Society.

WATCH VIDEO: An afternoon with mama cat and her furry babies. She surely has got her paws full!

Share this story and help them find their forever homes!