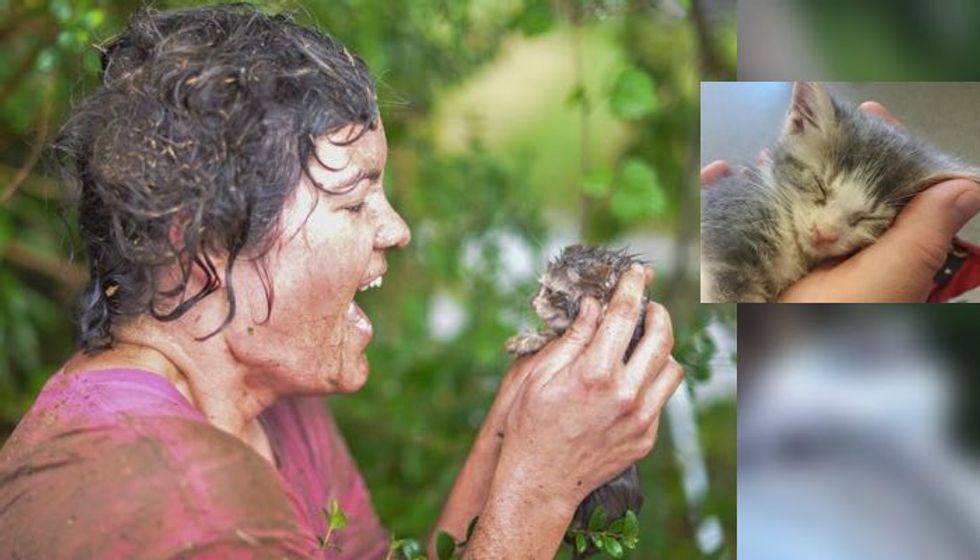 A rescuer went to heroic lengths to rescue a tiny kitten from a drain pipe as rain fell and water was rising.

Dorella Tuckwiller, the founder of Itty Bitty Kitty Committee rescue group in Charleston, West Virginia, crawled head-first into a storm drain pipe, immersing herself in the water to save the weeks-old kitten from drowning.

Residents heard three kittens crying in the pipe. One was taken to safety by its mother, and one unfortunately drowned. Volunteers tried to coax the last kitten out but she continued evading rescuers and headed towards the other end of the pipe, which was covered by a gate.

Firefighters helped pump water out of the ditch during the rescue.

As the water slowly receded, Tuckwiller dived into the drain pipe to retrieve the barely breathing kitten once there was enough of an air bubble.

As a small group of people tried to pull her out of the drain, she handed the drenched furry kitten over to the crowd while half her torso was still inside the drain.

"I had about this much space between my head and the water," Tuckwiller said, showing about six inches of space between her hands.

"Everybody who came together has been amazing, if the fire department hadn’t been pumping the water out, I don't think there would have been enough space in there to get to (her). Every single person standing right here who shared what I posted, who responded, everyone is a hero. It takes a little army to save one little life."

They named the little kitten Stormy. She is a very beautiful little girl who is estimated to be around 5 weeks old.

"Although we are extremely thankful for the life we were able to save, we are heavy hearted for the lives that were lost before we arrived. This is the part of rescue that is the toughest," Itty Bitty Kitty Committee rescue wrote. (Facebook)

"On our way to the doctors office with her a huge rainbow crossed the interstate. We took it as a sign from those precious cats who crossed the rainbow bridge too soon, but also reminded us about beauty after a storm. Thank you to all of the volunteers who came to our aid."

"Stormy is doing great! She is eating well and is full of energy."

"Stormy is currently residing with a wonderful foster family and is in the best of hands."

Share this story, and help Storm find a loving home.