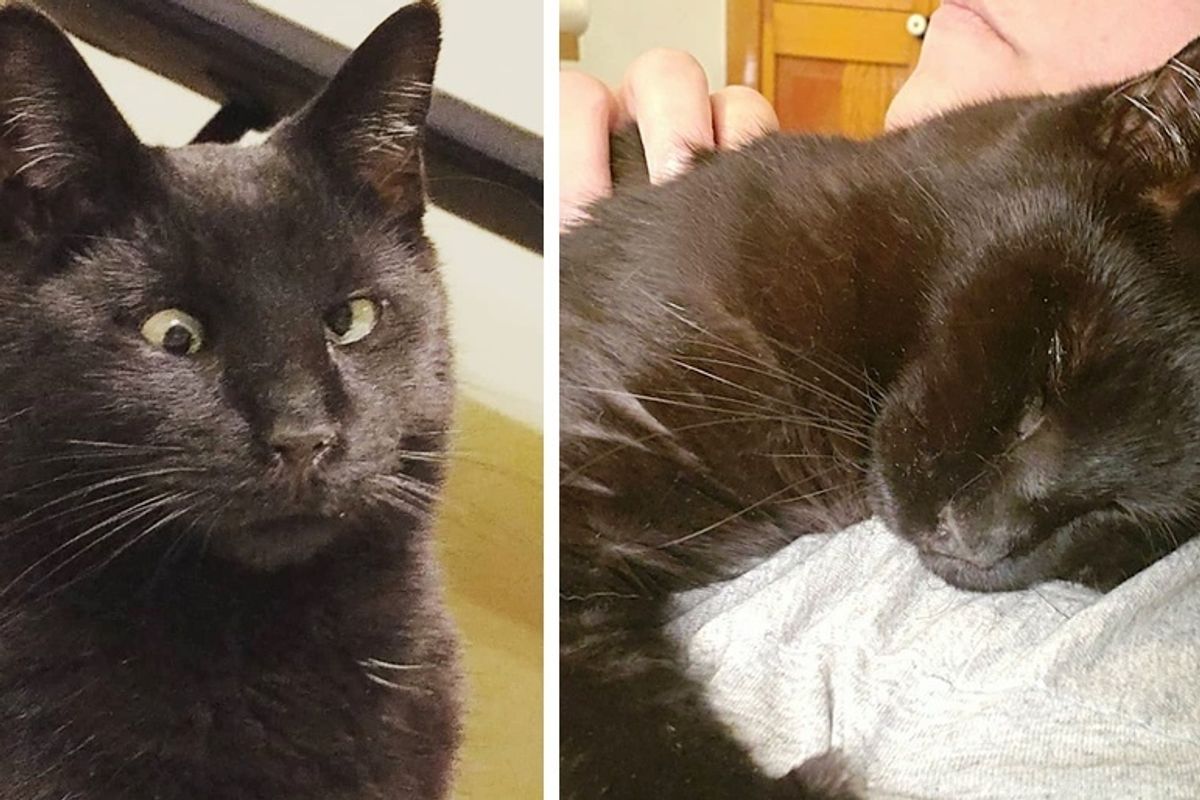 A black cat wandered into a feral cat colony in New York. Local rescuers noticed that he was likely once someone's pet, and he needed help. 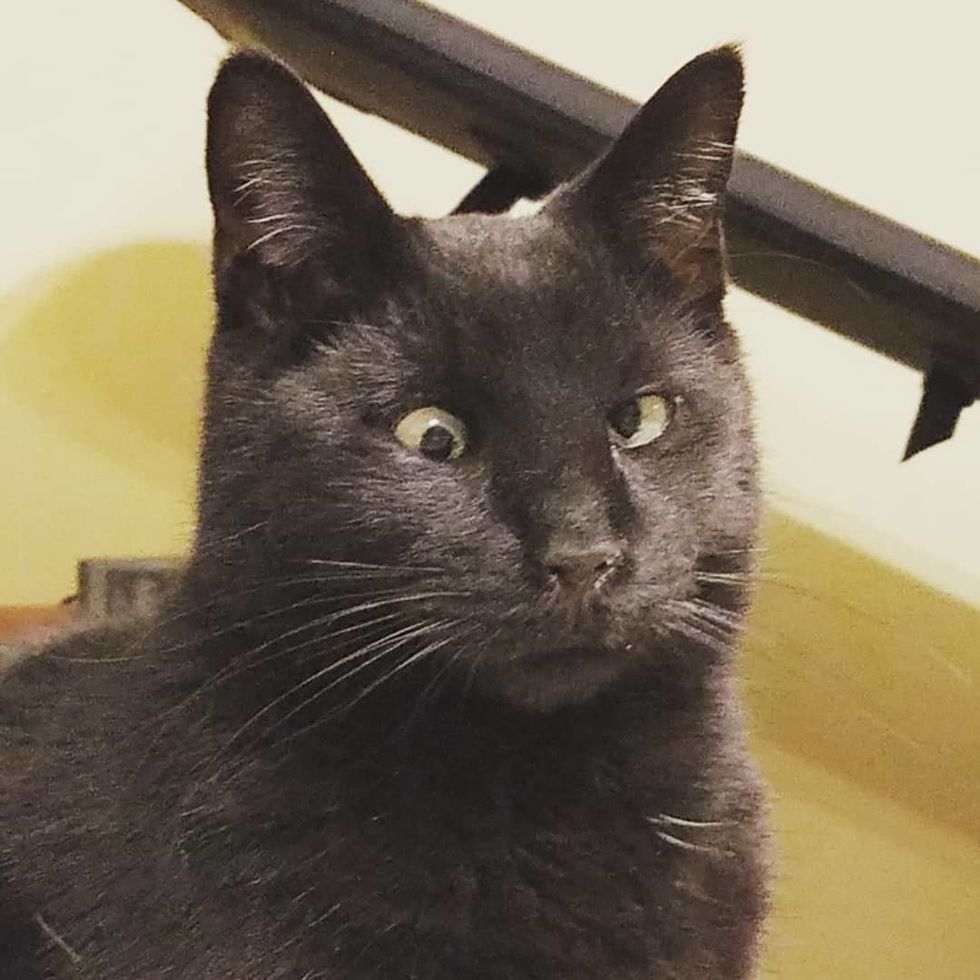 Little Wanderers, a rescue group in NYC, took him in and placed him in a foster home. He was completely congested, had a high fever, severe dental disease and was in poor health. They named him Spike. Once, he was in foster care, they realized that he needed more help than they had anticipated.

He was terrified, hissing and swatting and even tried to escape a couple of times. Adrienne, a foster volunteer based in Philadelphia, who is experienced in socializing adult cats, offered to help.

She brought him home, and the frightened kitty cowered in the corner and wouldn't let her near. "He was sad and scared and didn't want to be touched," Adrienne told Love Meow. 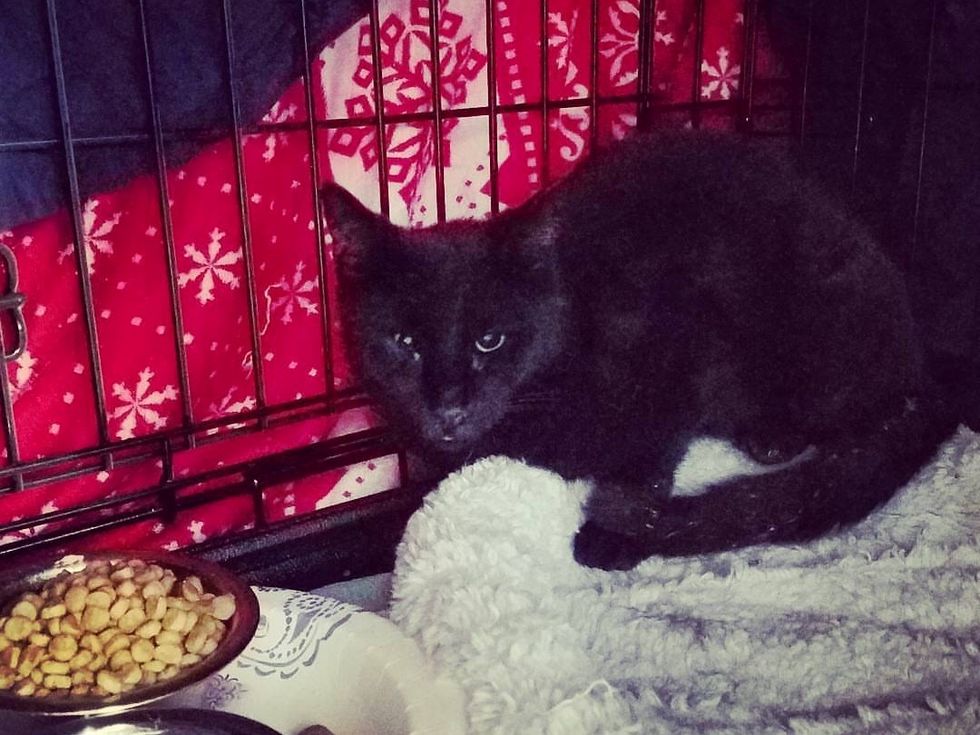 "I would spend an hour at a time, just trying to get him to let me put my hand near him for five minutes. We did that dance a few times a day, every day. Eventually he'd let me pet him, but everyday was almost like starting from square one again."

Despite the challenge, she was hopeful that some day, he would come around. While the cross-eyed cat was slowly making progress, Adrienne noticed that Spike began to show interest in her resident cats. 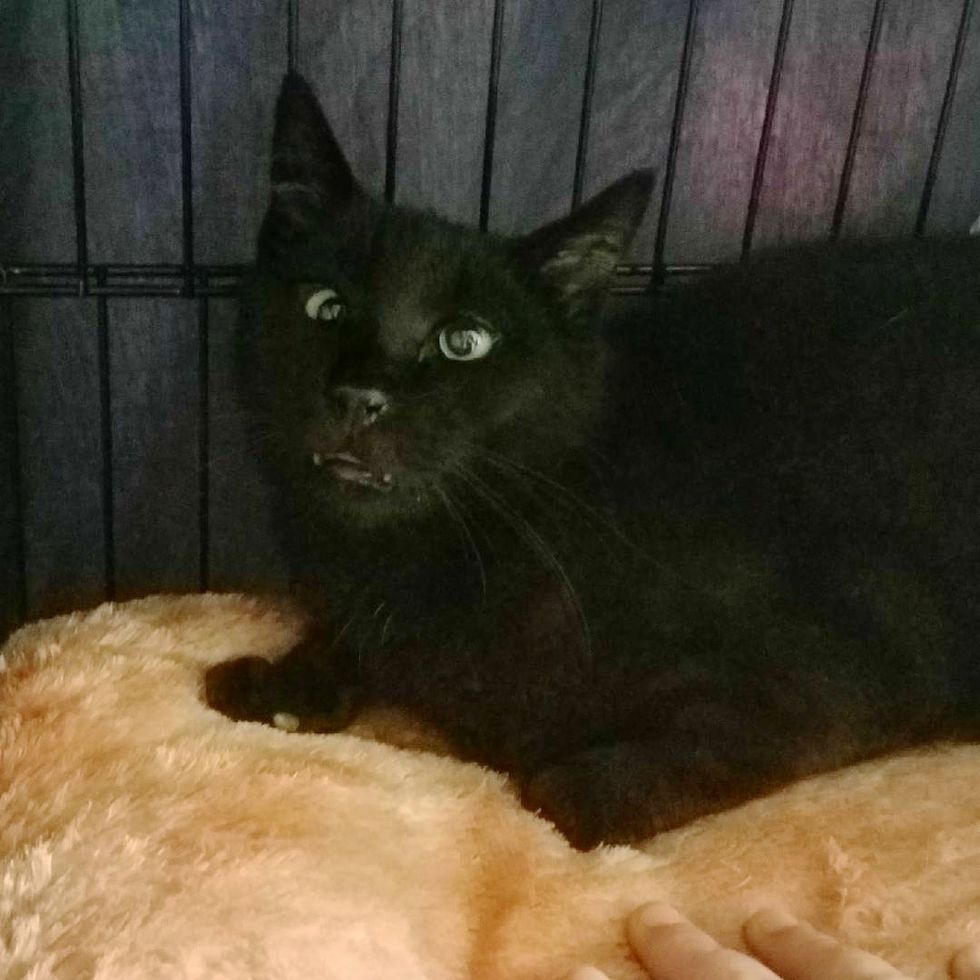 About three weeks in, Adrienne decided to try something different — to let him roam around the basement in hopes of helping him relax and gaining his trust.

"After a couple days, he started coming out more. He definitely loved being around other cats. I think for him it's the best of both worlds, living inside, but still having a colony." 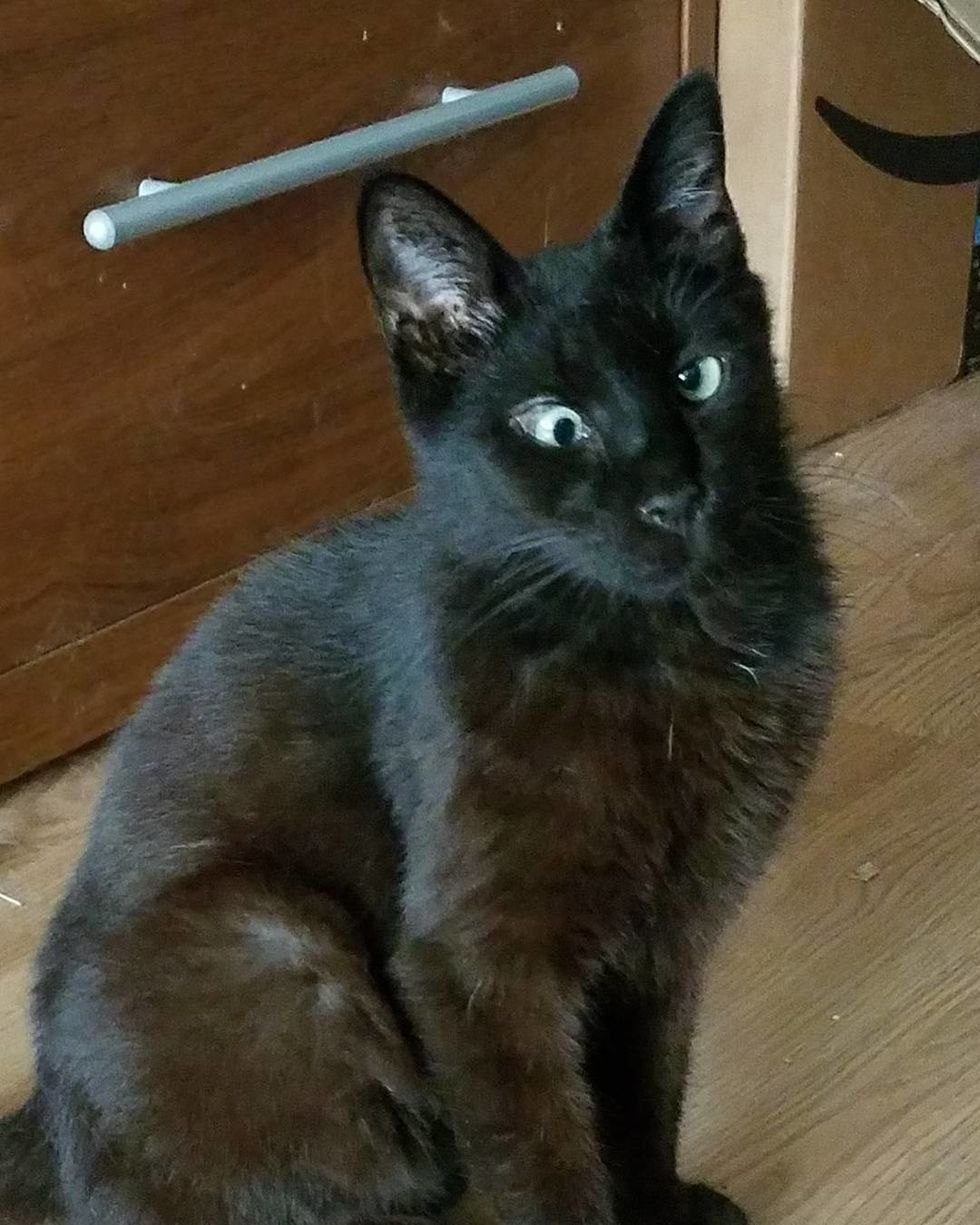 As much as he adored the other cats, he kept his distance from his foster mom. Adrienne would try to use food and treats to bond with him.

"One day, out of nowhere, he jumped on the ottoman in front of me and wanted to be pet. It was like a switch got flipped and now he loved me," Adrienne added. 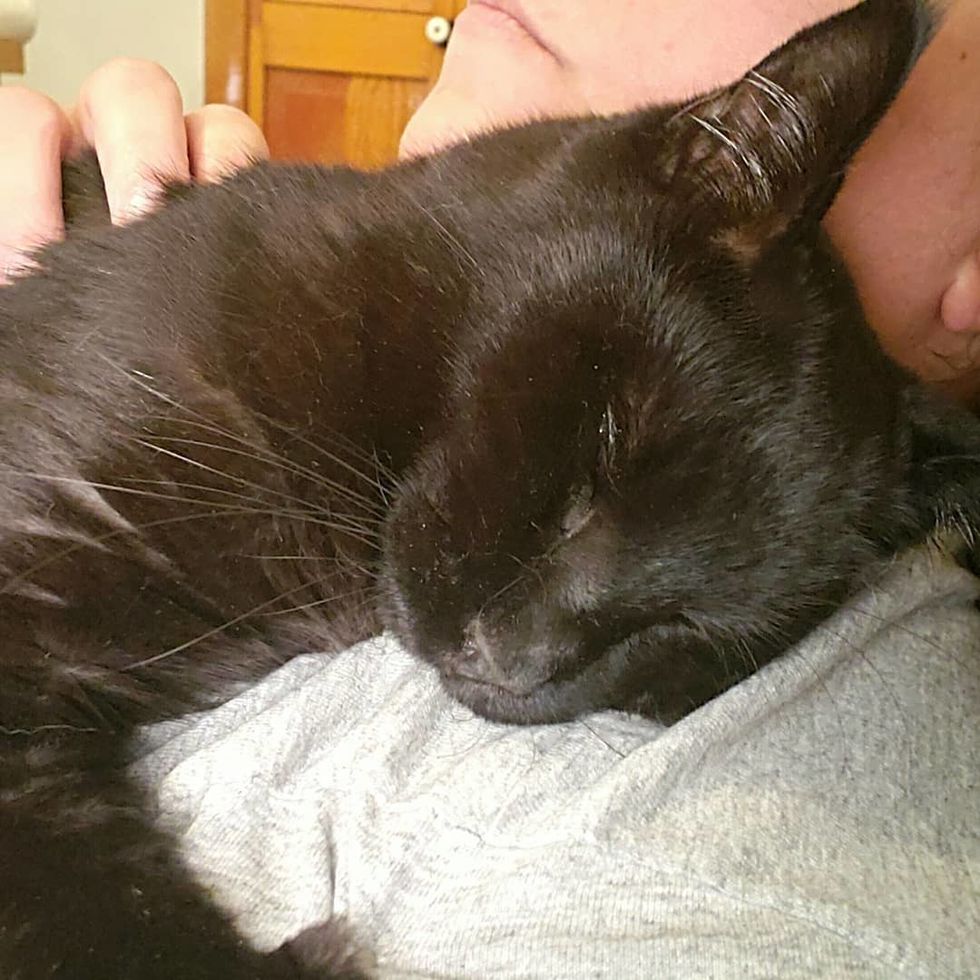 "A month after that, he jumped on my chest when I was lying down, and he became the biggest cuddle-bug ever."

Watch his journey in this video:

Rescued cat finds love and has his life turned around www.youtube.com

"While we're not 100% sure why his eye is crossed, my vet agrees with my suspicion that it was due to some type of trauma, and this trauma not only caused him physical damage but neurological impairment as well," Adrienne told Love Meow. "Because of this, a lot of normal things frighten him." 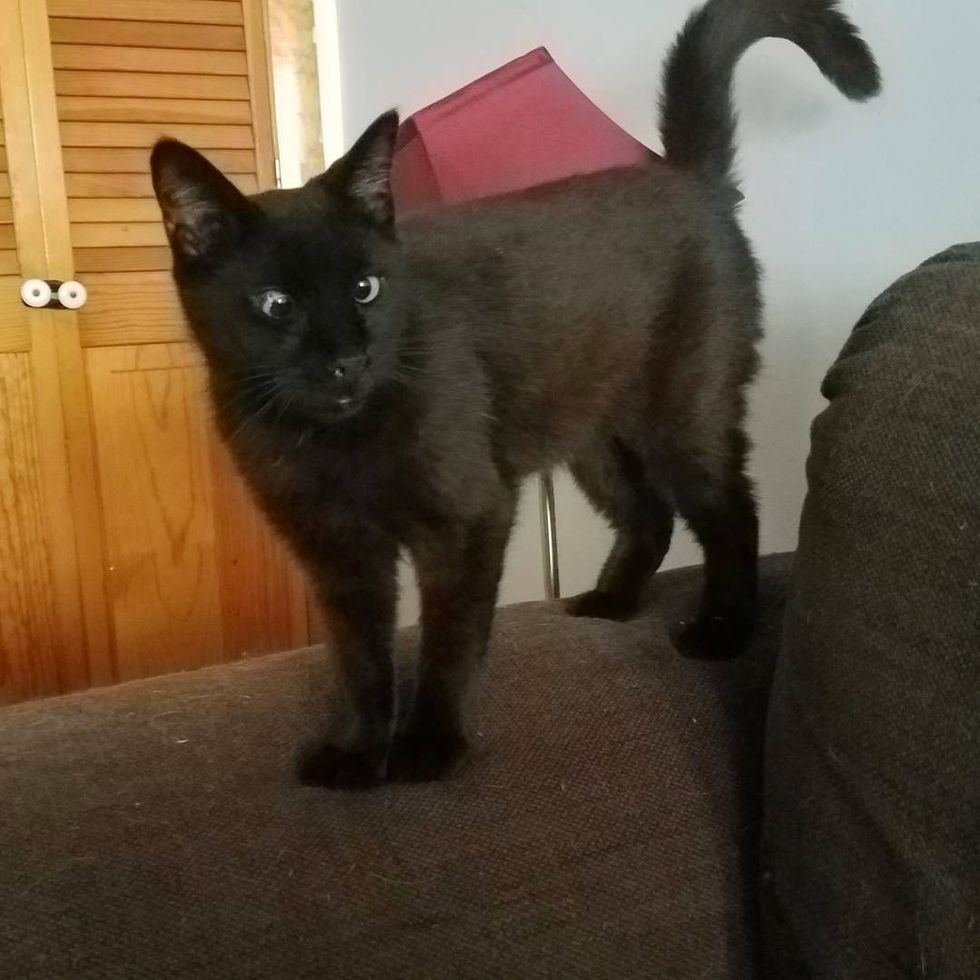 Spike has gone from a terrified, hissy cat to a snuggly teddy bear, who now regularly sleeps curled up in Adrienne's arms.

"As cuddly as he's become, it always has to be on his terms." 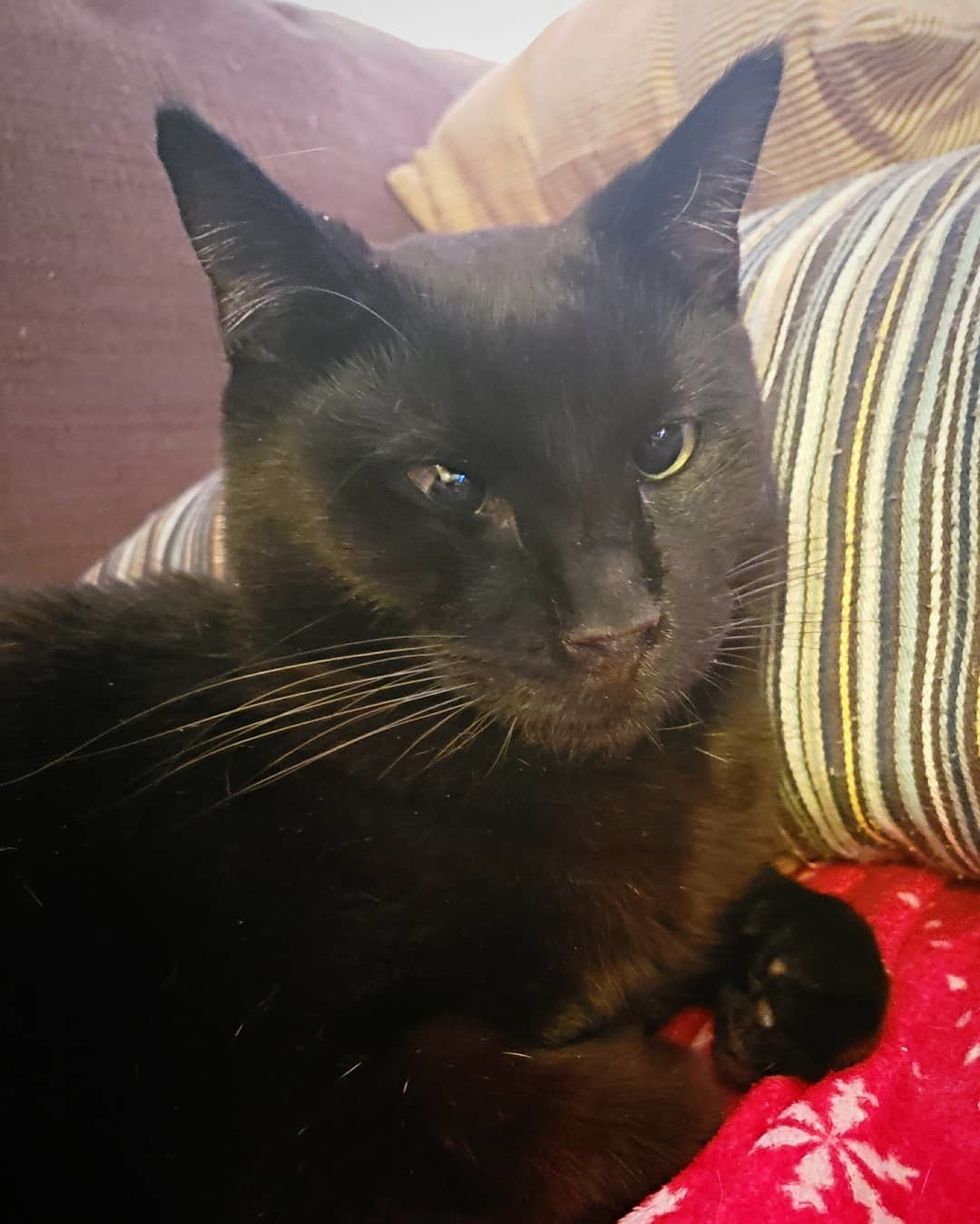 Initially, Adrienne planned to foster Spike until they could find him a good home. "He's got so many quirks and idiosyncrasies to keep track of. I knew finding the right home for him was going to be hard."

After looking and waiting for a while, Adrienne realized that he had already found his perfect home. 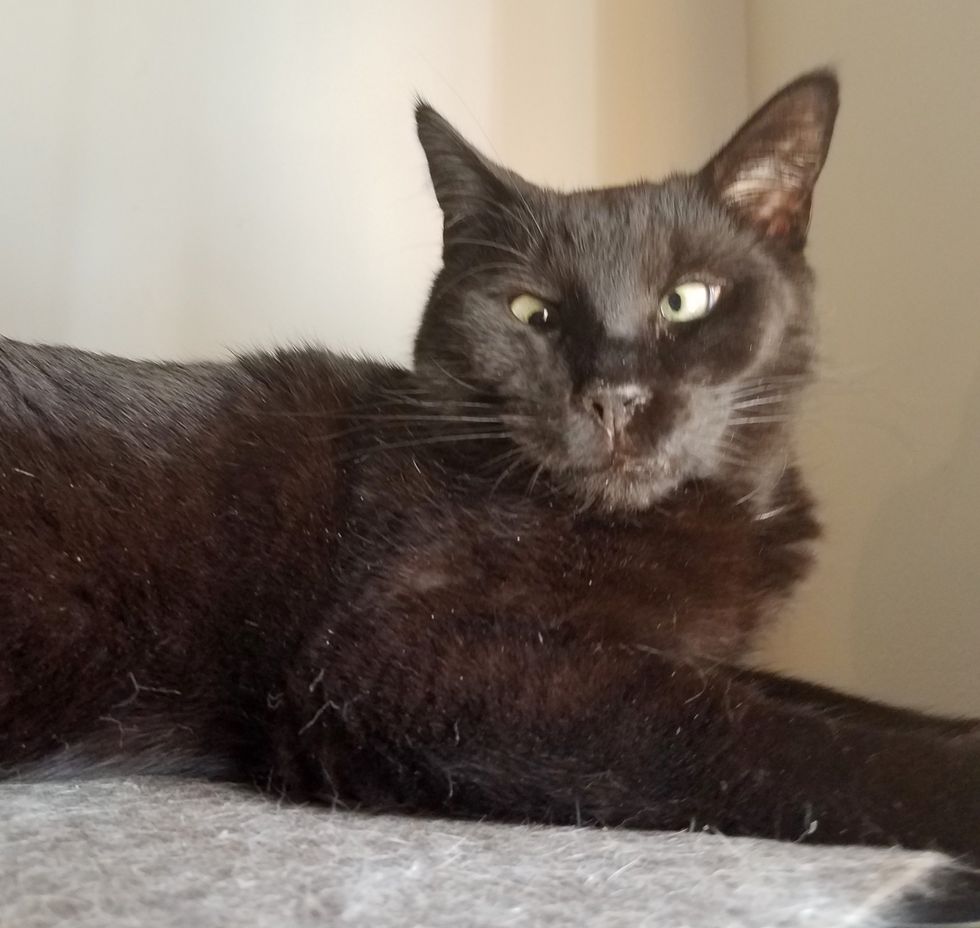 Knowing that he still needed a lot of work and that he had bonded with the resident cats, Adrienne couldn't put him through change all over again.

"He deserved to be happy and have stability. So right around Christmas, I decided he was going to live with me forever." 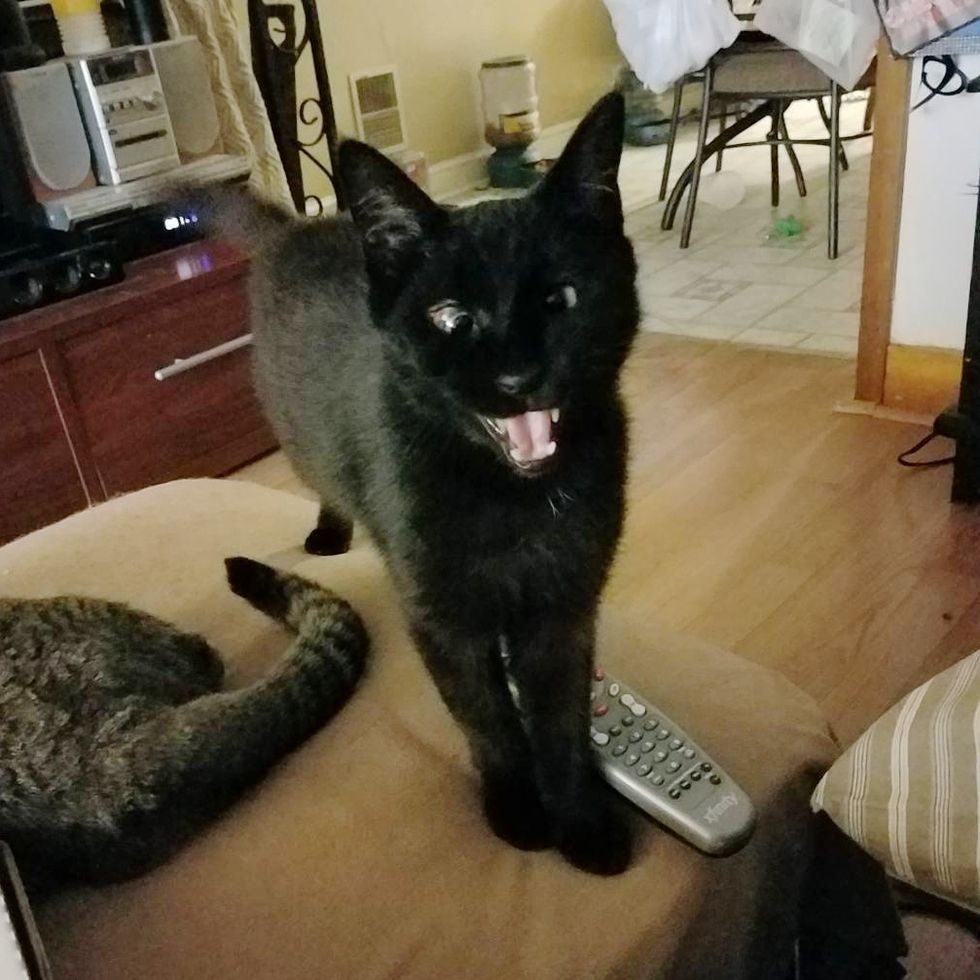 Spike is thriving in his forever home with his feline friends and human mom who loves him to bits.

He continues to improve every day. 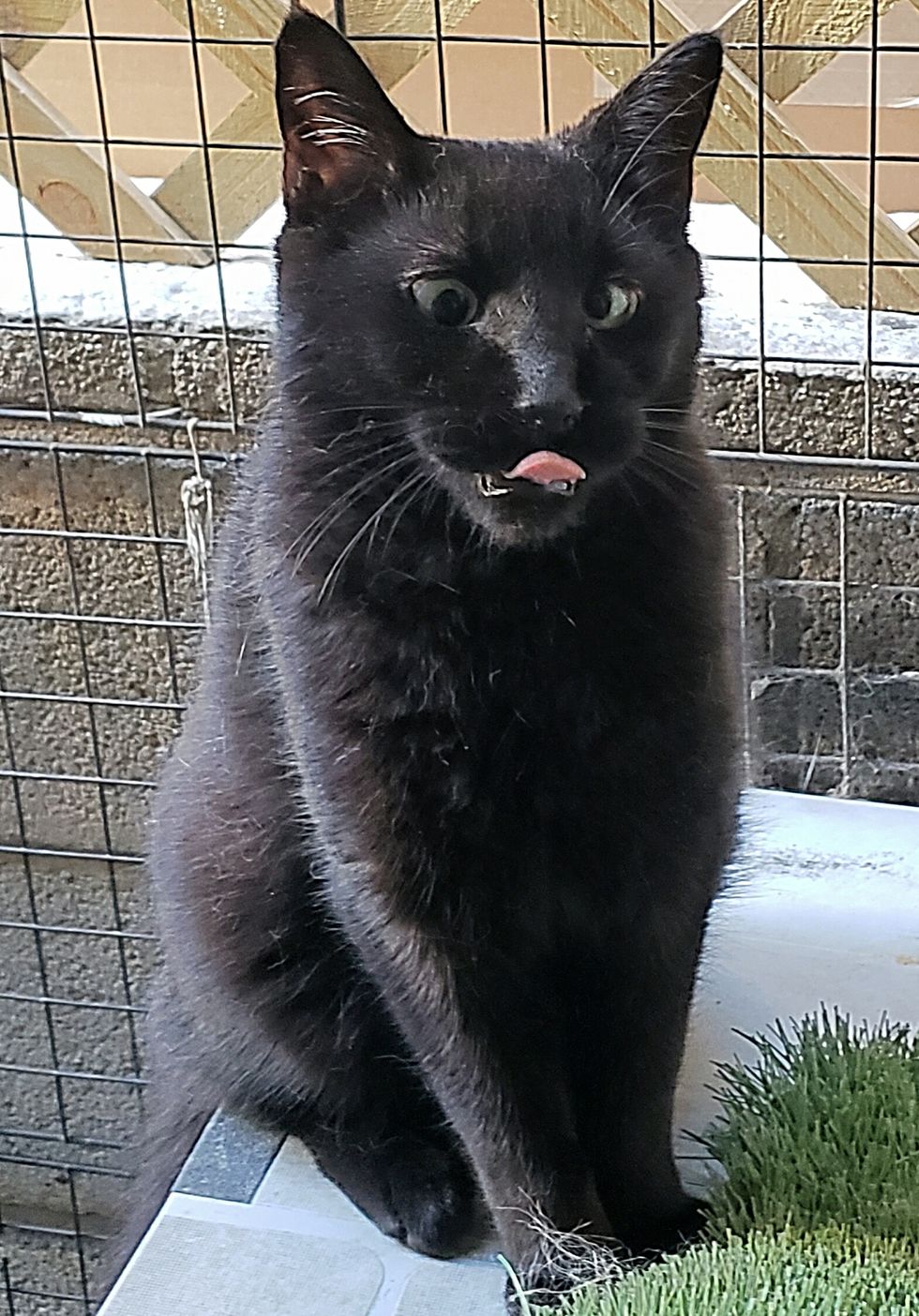 "He's a super sweet cat who loves his life, his cat siblings, bay windows and hanging out on the catio, but he always comes to bed with me every night to cuddle." 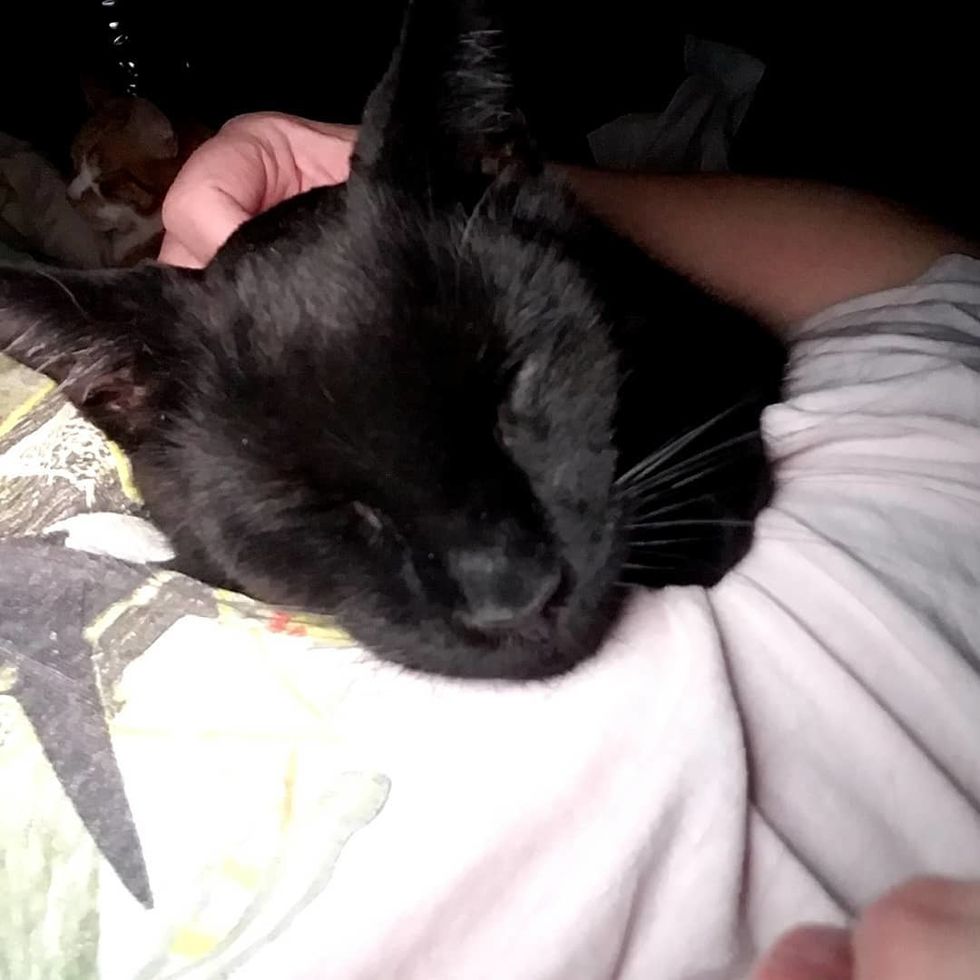