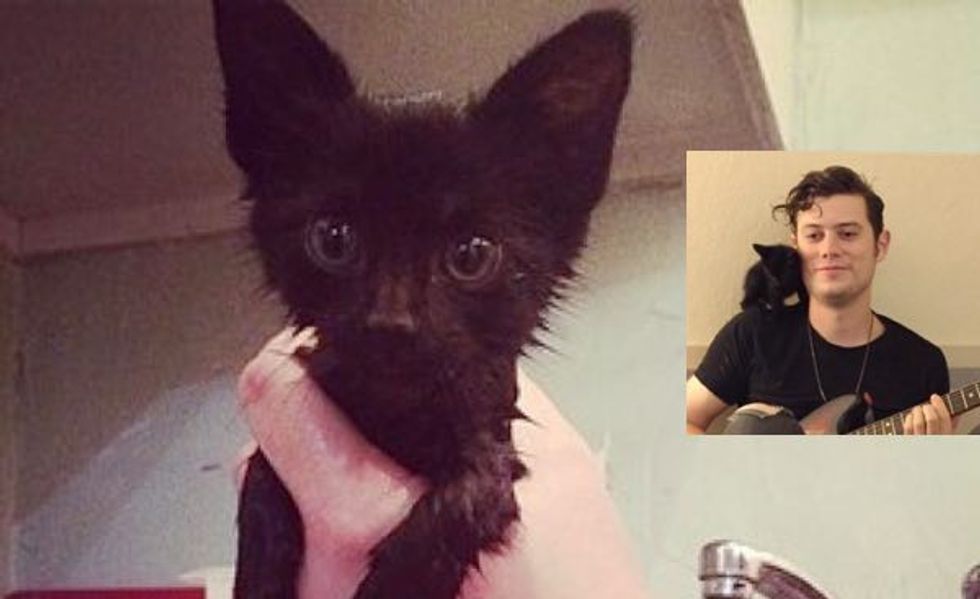 These Musicians Rescue and Care for an Abandoned Kitten While on Tour. Meet Lil Trucker!

A band of indie rockers recently rescued a tiny kitten at a Texas gas station during an overnight stop between Houston and Dallas tour dates.

"We were a little delirious from lack of sleep but we could swear we heard meowing coming from under the hood of a pickup truck," lead singer Nick Wold of the Brooklyn-based band Dreamers told BuzzFeed Music.

They talked to the gas station employee about cat sounds, and convinced her to open up the hood....

"...there was a tiny black kitten sitting right there on the engine," he said. "She quickly grabbed it and handed it to me. The kitten was brand new, couldn’t have been more than 2 weeks old, and was making terrified spitting hisses and clawing at my hand with weak harmless claws as if fighting for its life. We stuffed it in a cardboard box and took it on the road."

They named her Lil Trucker! Everyone from the band fell in love with their little furry buddy. They couldn't just leave her at the gas station so decided to take her on tour with them. And soon Lil Trucker became their tiny mascot!

After every concert, Lil Trucker is there waiting for her humans to return and play.

Nothing makes Nick happier than having a little furry companion by his side while he's on tour.

Lil Trucker is Nick's biggest fan and his shoulder kitty.

The band will continue to care for the kitten until they can find her a forever loving home.