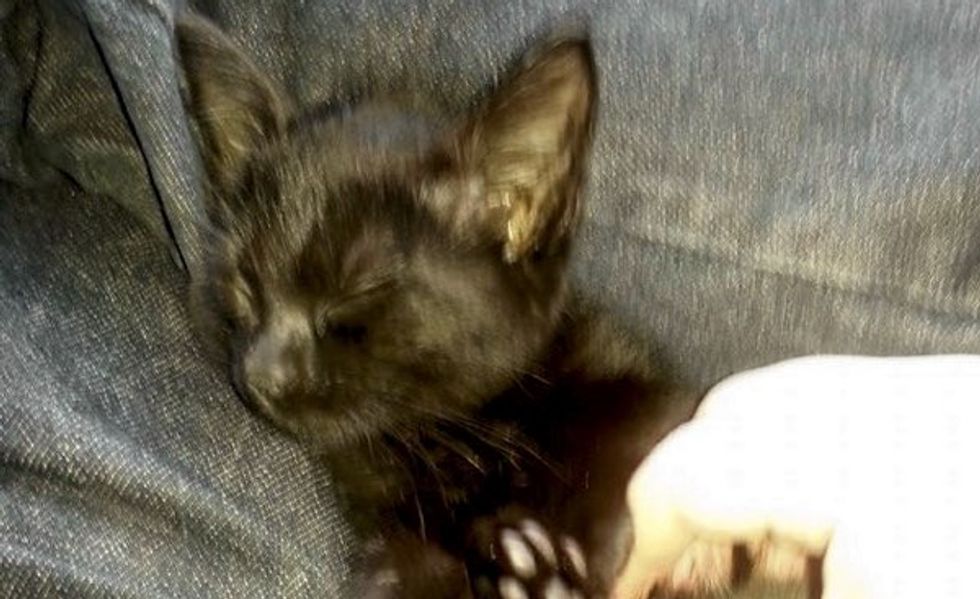 They Heard a 'Mew' from Inside the Car, Pulled Over and Found This Cutie

"Heard a 'mew' come from inside the car while driving. Pulled over and found this in the engine," reddit user Ayzkalyn wrote. (reddit)

"I was driving to Oklahoma City with a friend (as a passenger) when we pulled over at a Quiktrip. As we were pulling in we heard a meow. I got out of the car and checked in the road for a cat. After no luck we slowly parked. After gassing up we prepared to leave, and heard the noise again. We thought perhaps it was in the car, so we decided to look in the hood of the car.

Unfortunately neither of us were educated in the methodology of opening a car hood, so we had the Quiktrip staff do it for us. We told them that we heard a cat while the hood lay open, and they look at us as if we were crazy. Without any luck, we left again.

A few miles down the highway, the noise started again, louder. It was definitely with us, and this was proof. We had already turned our cellphones to mute to make sure it wasn't that, and we were now on full alert. We pulled over next to a large semi-truck on the side of the road, and my friend explained our situation to the driver. He seemed really concerned for a burly bearded semi driver. He helped us open our car hood (cause we still didn't know how) and looked with us. He grabbed a flashlight and shined it into the engine.

The creature went silent whenever we opened the door. I noticed that the edge of the car hood was fluffy. I thought it was kind of weird, and stared at it for an embarrassingly long amount of time. Then it moved. I jumped, and yelled for the others to look. It had crawled into a very small space (about the size of a soda can) and it was hard to get out. We grabbed a leg each, and began to pull. It pulled against us, determined to stay in. As it stretched out over the car hood, it looked rather long and in poor condition. I was really hoping it was a cat and not a ferret or some other creature.

Finally it came loose and I held it as tight as I could, as hundreds of cars were blazing past us every minute. We thanked the driver, and returned to the car, where it viciously tried to escape. I had to hold it down, and try to keep it calm."

"After about an hour, it fell asleep in my lap, and I took this..."

They helped the kitten find a good home.