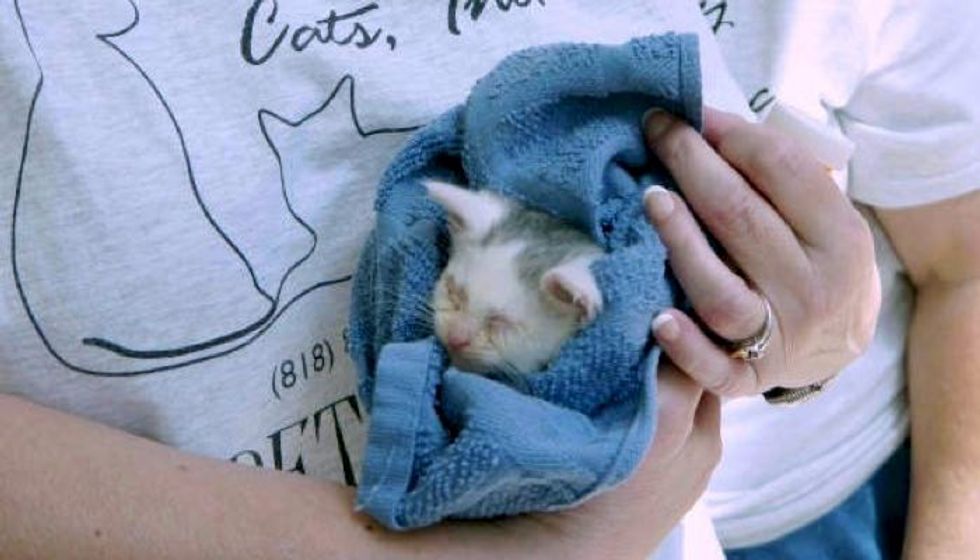 They Saw Through Wall to Rescue Tiny Kitten

A tiny kitten was found in the wrong place but luckily rescued by the kind people in a Southern California home. Paula Tiberius saw a cat mother moving her kittens to a new location along her fence. She followed the cat mother into her shed and found a tiny kitten inside. Thinking that the mother was around, she didn't pick up the kitten right away.

After that day, Paula and her family kept hearing meowing at night but the sound came from the attic. Eventually she decided to venture into the attic to trace the source of the cries. She crawled around inside but it was to no avail. Somehow the meowing moved to the first floor wall. They knew that the kitten probably got stuck behind the wall so without hesitation they set out a plan to get the kitten out to safety.

A tiny kitten was rescued from inside a wall. He was skin and bones, covered in fleas.

Paula worked alongside her husband Richard in the rescue. They carefully sawed through the wall and removed a small four-inch square piece of drywall. What they saw next was a skinny kitten covered in fleas, crying for help. The kitten appeared to be sick and needed immediate medical attention. They gave the kitten a very needed bath and hand picked the fleas from his fur.

Paula called Kelly Roland, founder of Animal Rescue Alliance and Farm Sanctuary for advice on helping the kitten. Soon after that they took him on a trip to the vet and placed him in the care of Petopia Animal Rescue where they nursed him back to health and found him a home.

Watch the rescue in the video:

He could finally see again after they cleaned out the discharge.

They took the kitten to the vet to get treated and cared for.

Volunteers at Petopia Animal Rescue took him in and nursed him back to health.

Paula named the little one Valentino for the heart shape on his head. Now adopted and renamed as Atticus, the kitty is living happily at his forever loving home.