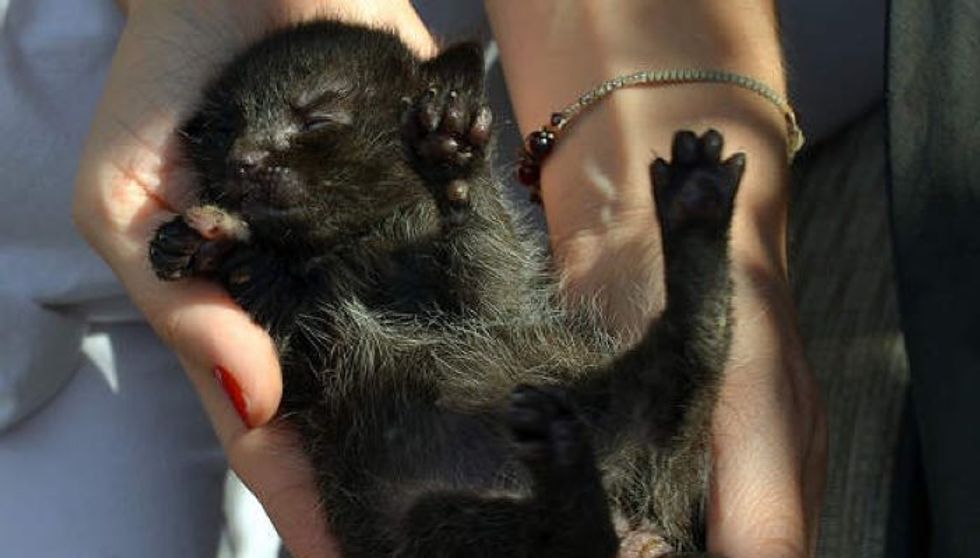 This tiny orphaned kitten was found on the street, wailing for her mom. Her eyes hadn't even opened yet, but her life was about to change.

"On June 2, 2013, a woman found a tiny kitten in the street when she was parking her car. She cleaned her up and brought her to a North Brooklyn Cats adoption event. I had just finished a semester, so I said I would foster her and find her a home. She weighed only 4.8 ounces. She was a SCREAMER for the first couple of days, so I named her Raptor," said Stephanie of Big City Little Kitty.

Little Raptor was found on the street by a kind woman.

They named her Raptor. She took to the bottle very quickly. The little one was hungry.

They even took turns to watch over her at night.

Raptor had to eat every few hours, so Stephanie took her to the office every day.

First time she ate all by herself. She made everyone proud!

After she learned to spend time in the big bed, she snuggled up with Tigra for a nap.

She grew by leaps and bounds, and was ready for her forever home.

This is Raptor when she just came to her foster home...

Raptor and her foster mom spending time together before heading to her forever loving home. :)

Share this story and help a kitty in your local shelter find a forever home!