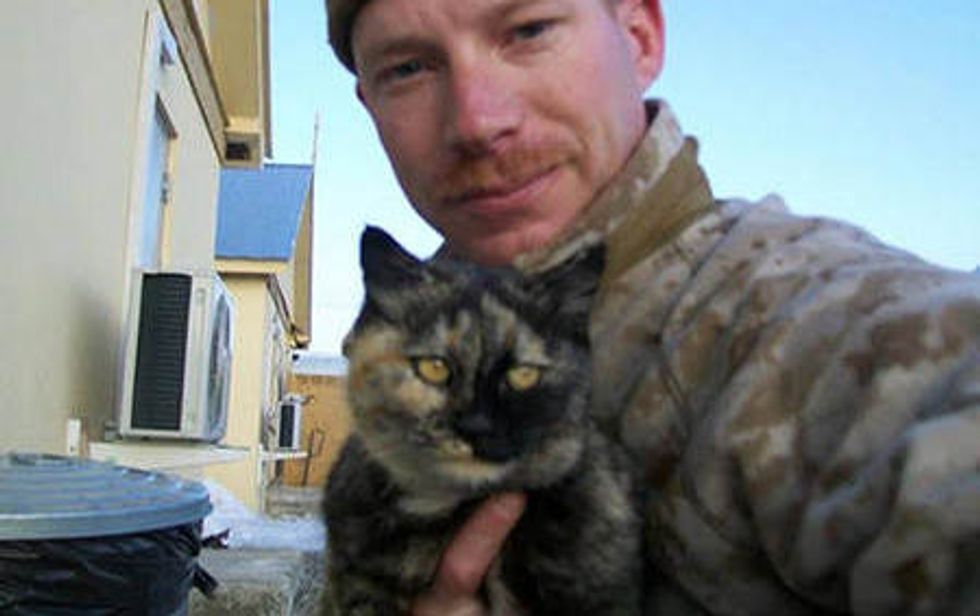 A tortie cat strayed into a soldier's heart when he was deployed in Afghanistan. After treating her for a cut, he knew that he couldn't part with her.

Bryant Smith wrote: "Crackers started coming around our building in Jan 2012. Poor thing was skin and bones, so I started feeding her when I saw her. She would run up and meow at me every time she saw me. I didn't want to get attached to her, because I had no idea about being able to get her home...but I couldn't resist her. One night, after being gone for a week, she suddenly appeared at my door (which was a first) and was meowing outside of it, so I snuck her inside. She looked horrible, starving and dehydrated. I spent the next couple of weeks doctoring a cut she had on her leg, and keeping her out of the two feet of snow. After that, she was my buddy, coming by every day for a warm bed and food. I found that she had a particular love for peanut butter crackers, of all things...hence the name.

When the Camp I live at started to catch the cats in traps, I panicked-and did everything I could to keep her out of sight of those that wanted to catch her. I was fortunate enough to be able to contact NOWZAD and arrange a pick up."

Nowzad raised enough money to help fly Crackers to the US to her soldier. After months of fundraising and preparation, they got Crackers a ticket to her forever home.

"She meows constantly. I always laugh at how torties do that," Smith added.

He couldn't part with her. With help from Nowzad, Crackers is now at her forever loving home in the US.

Photos by Nowzad, a non profit charity organization that makes a difference to the lives of animals in Afghanistan. Follow them on Facebook.