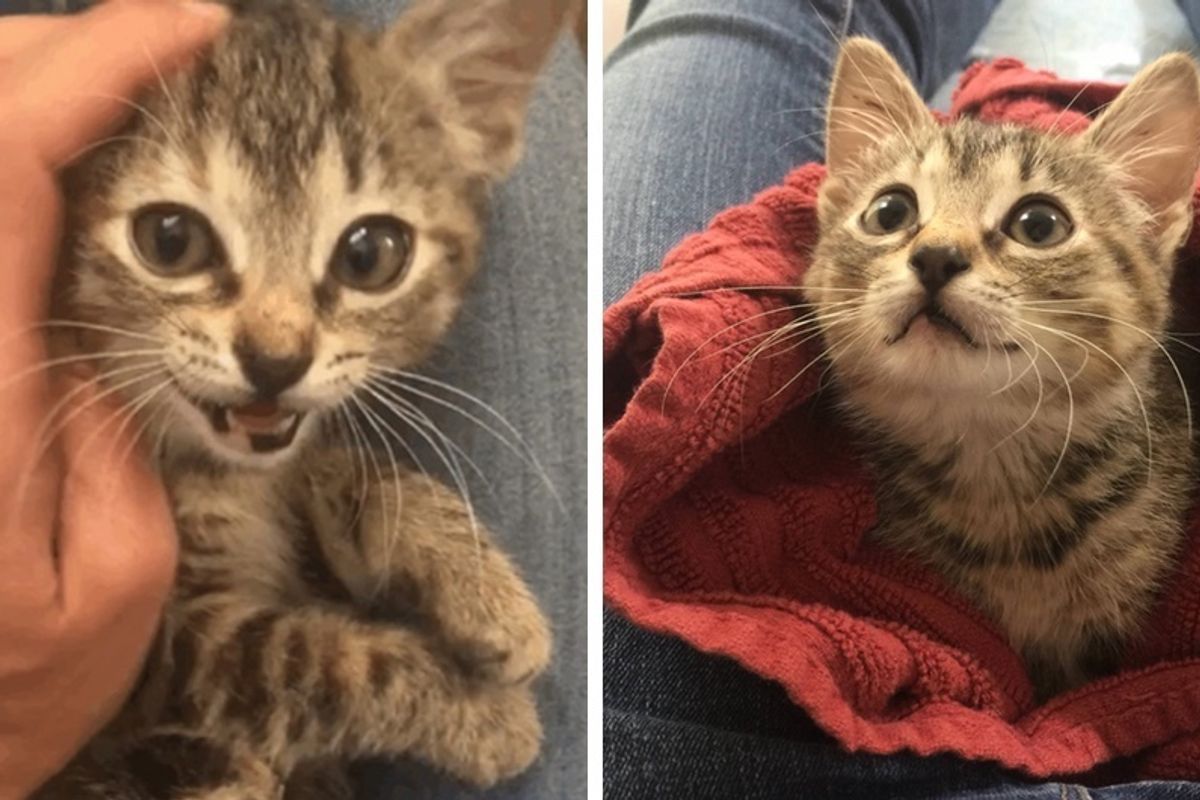 Tripod Cat Abandoned Outside Shelter Was Terrified Until She Found Someone She Loves.

A kitten was found outside of an animal shelter in San Antonio, Texas. She was traumatized, missing part of her hind leg and was running around the building, desperately trying to hide.

It took a team of eight people to catch her and bring her to safety. Meet Spitfire! 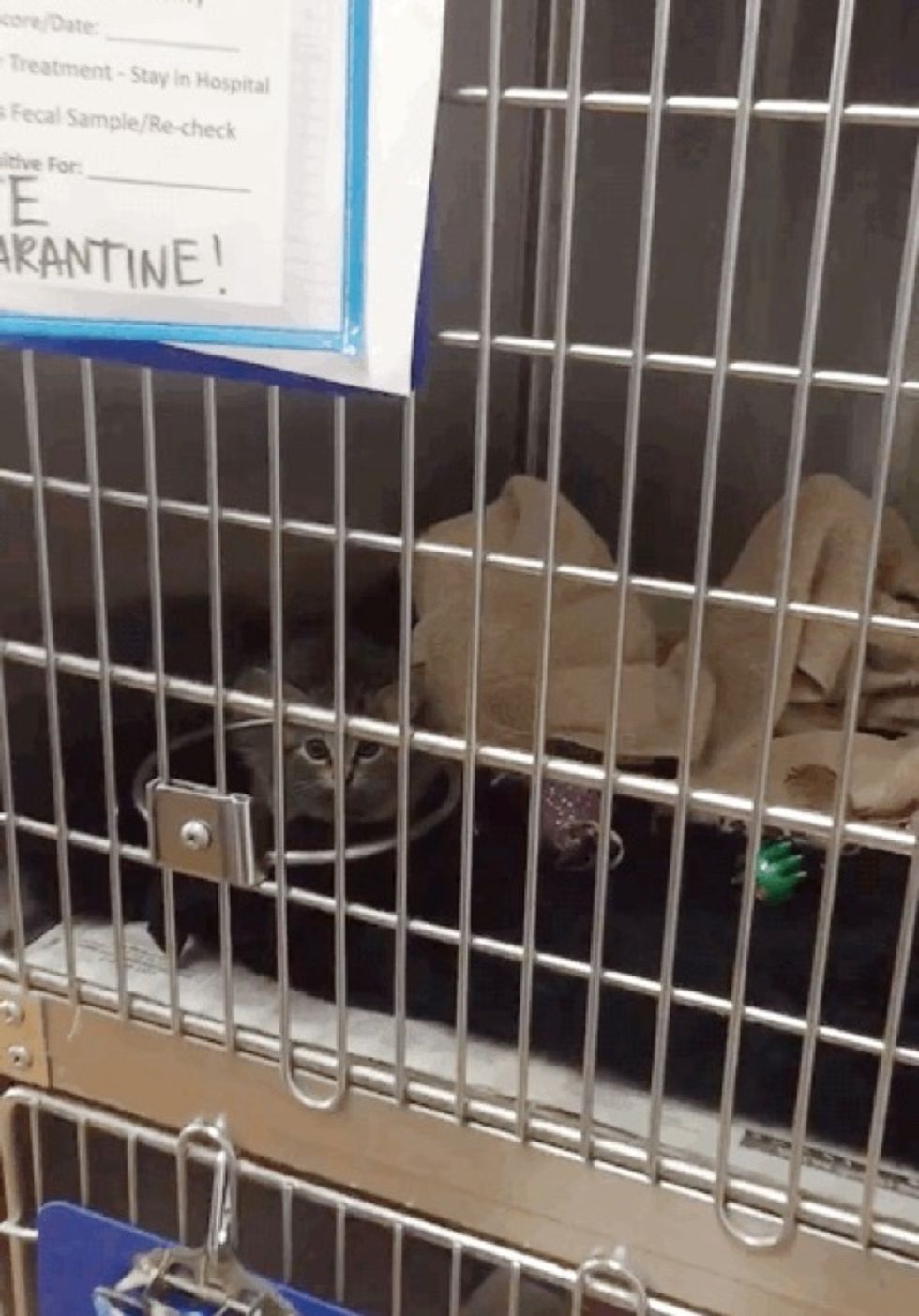 While Jaclyn was working for the animal rescue last year, she came across this terrified kitty at the shelter. The tabby's leg was severely injured that would require surgery when she was big enough.

On the first day they met, there was a lot of hissing and spitting (hence the name), but Jaclyn was determined to win her over.

"Nobody could get near her let alone touch her. She was tiny but aggressive and traumatized. It took a couple weeks before I could actually touch her without gloves or any kind of safety measure," Jaclyn told Love Meow. 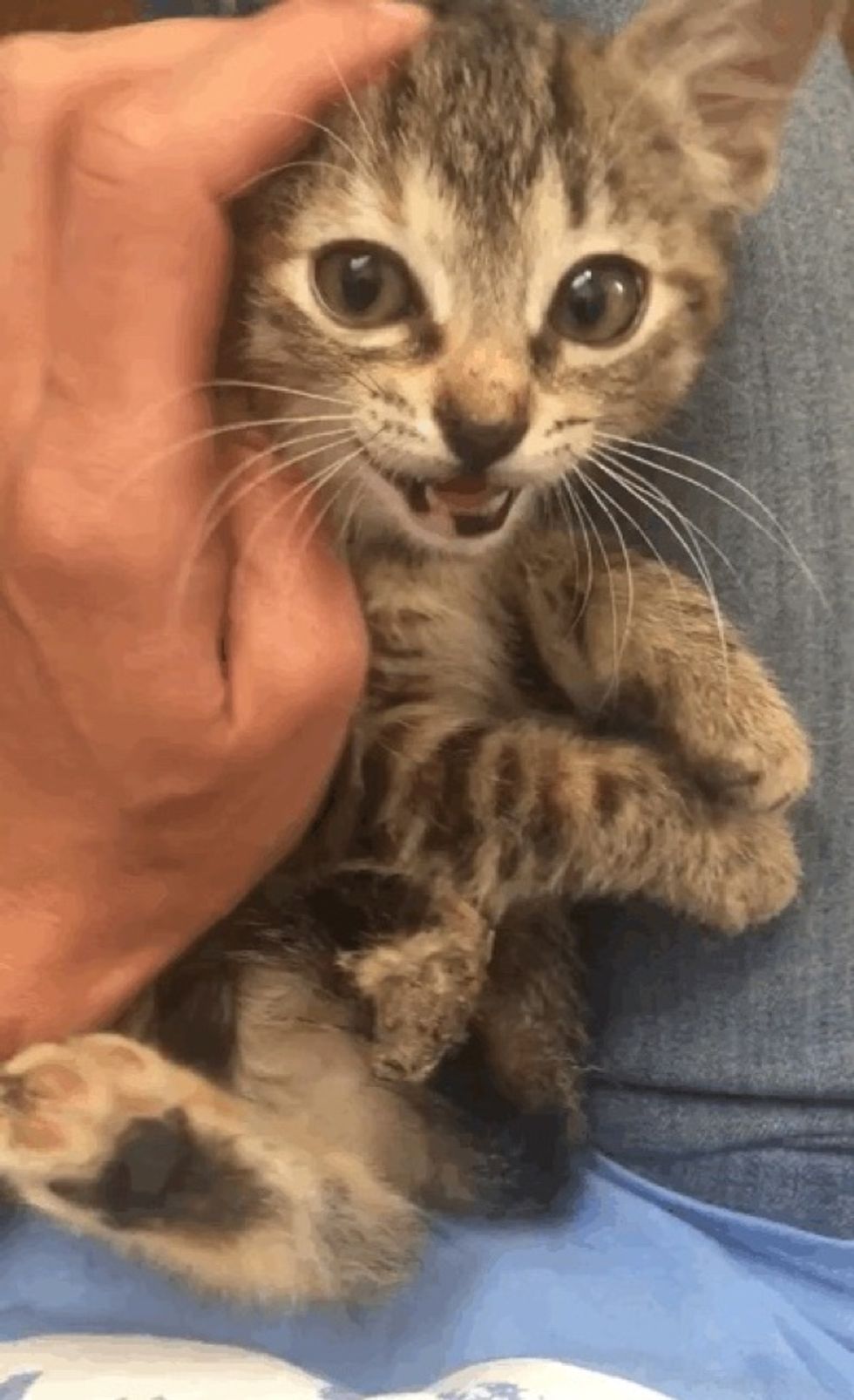 Jaclyn was the first human that was able to hold Spitfire, so she offered to foster and socialize the kitty until she was ready for surgery.

Little Spitfire was learning to accept love and some head scratches.

The kitty became more and more comfortable with her human friend.

It was time to move into a foster home. 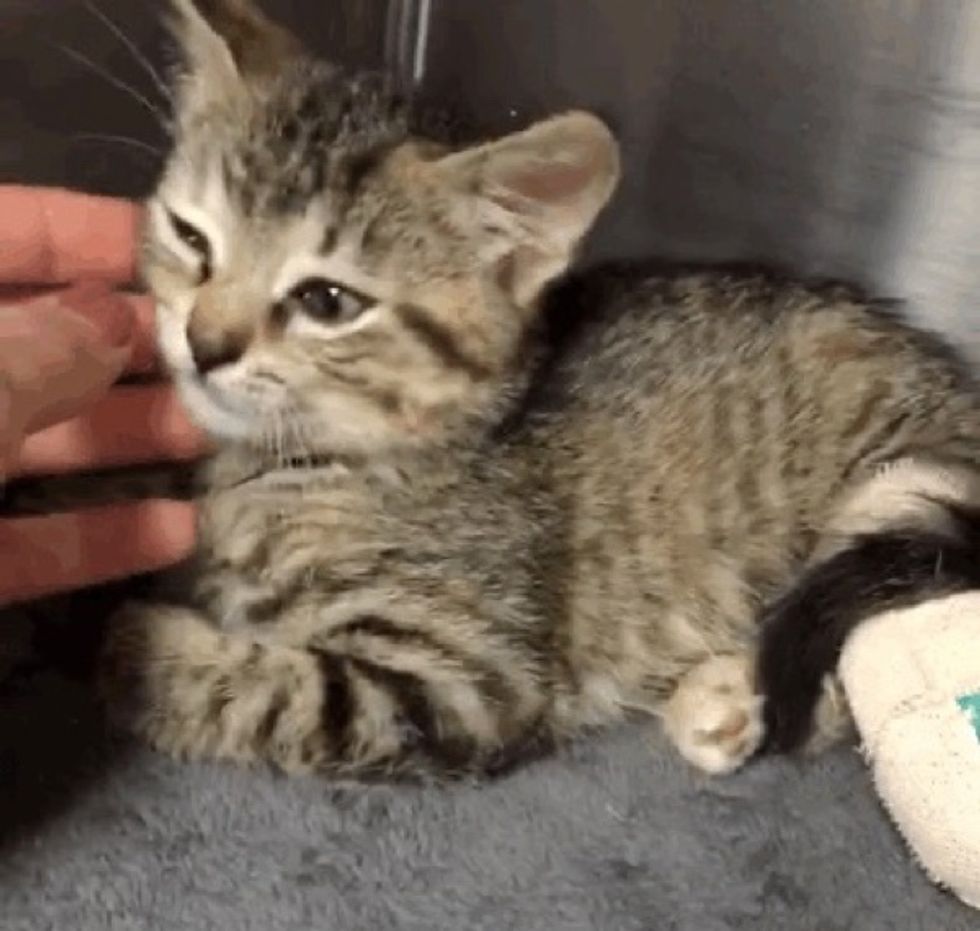 Spitfire snuggled in Jaclyn's lap during her trip to her foster home.

For the first time, she felt completely safe. 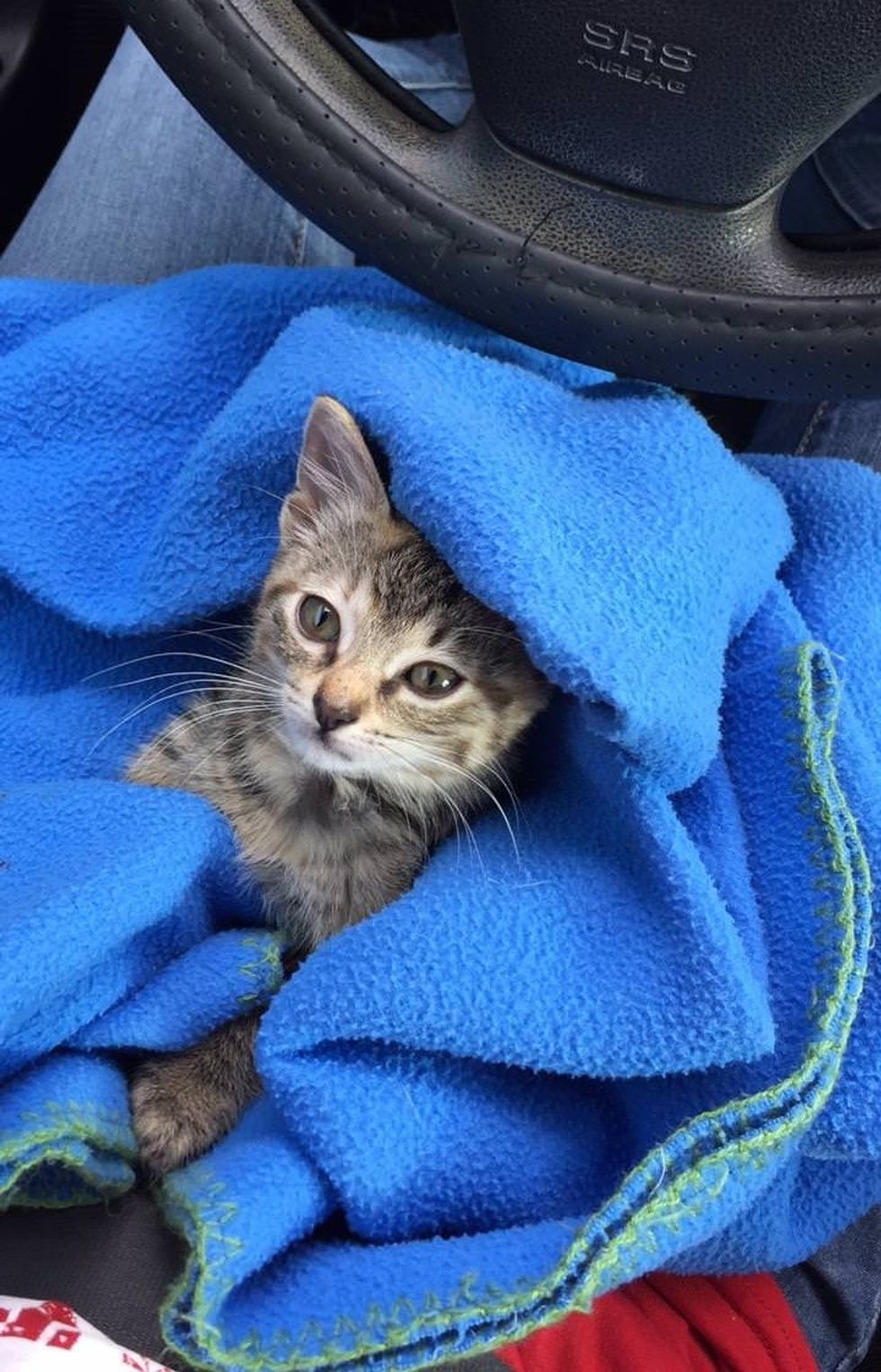 The fear in her eyes was completely gone, and instead they were filled with curiosity and joy. 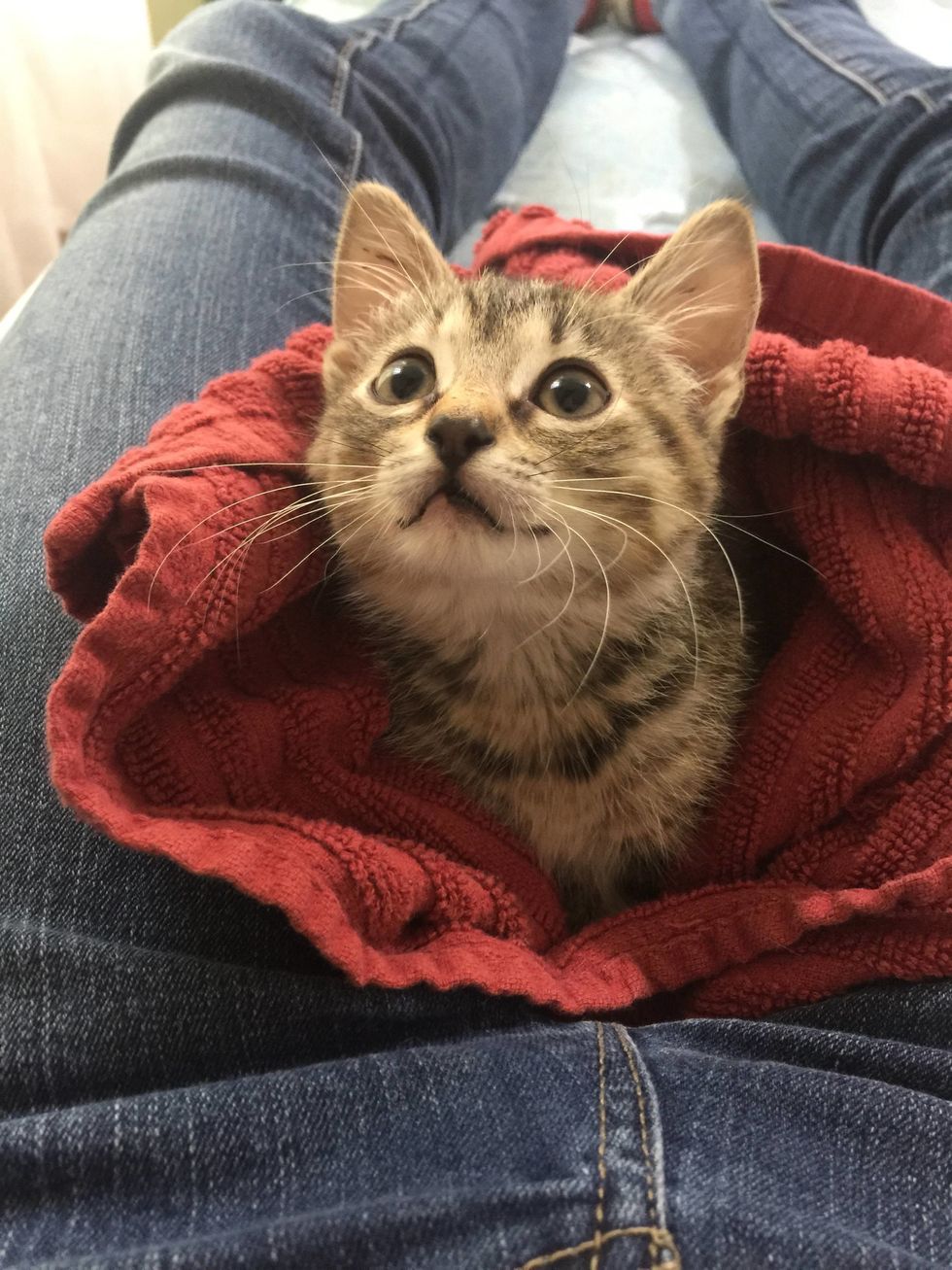 The little Spitfire grew to be a lovebug, constantly asking for attention and cuddles.

"If she wants to be picked up, she will stand in front of your feet, look up and scream at you until you scoop her up. And I can never go to the bathroom alone. When I let her in she sits on my feet til I'm done," Jaclyn told Love Meow. 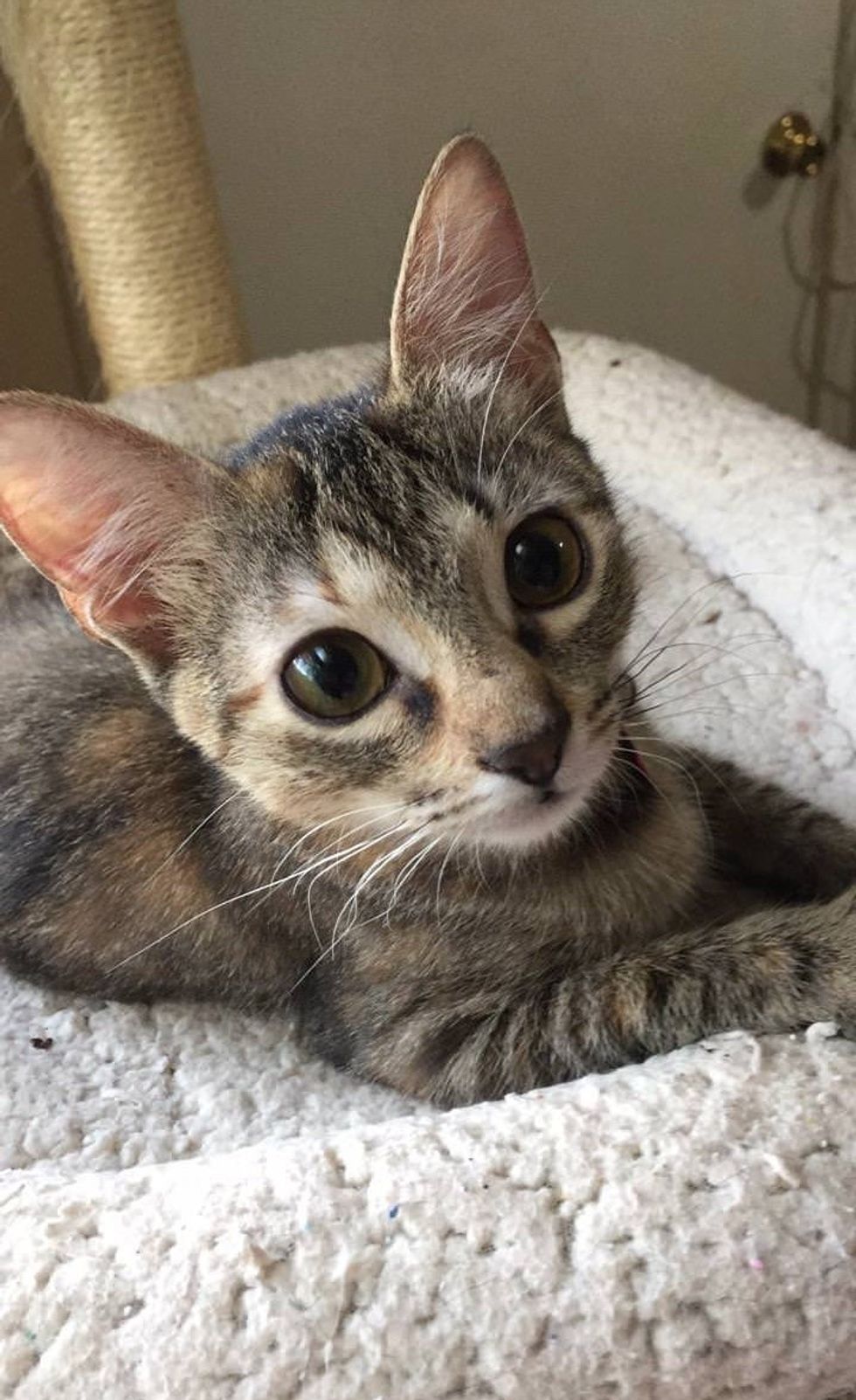 "I got her weight up and finally they were able to remove what was left of her leg. In the end I adopted her."

The brave kitty was recovering well after surgery. 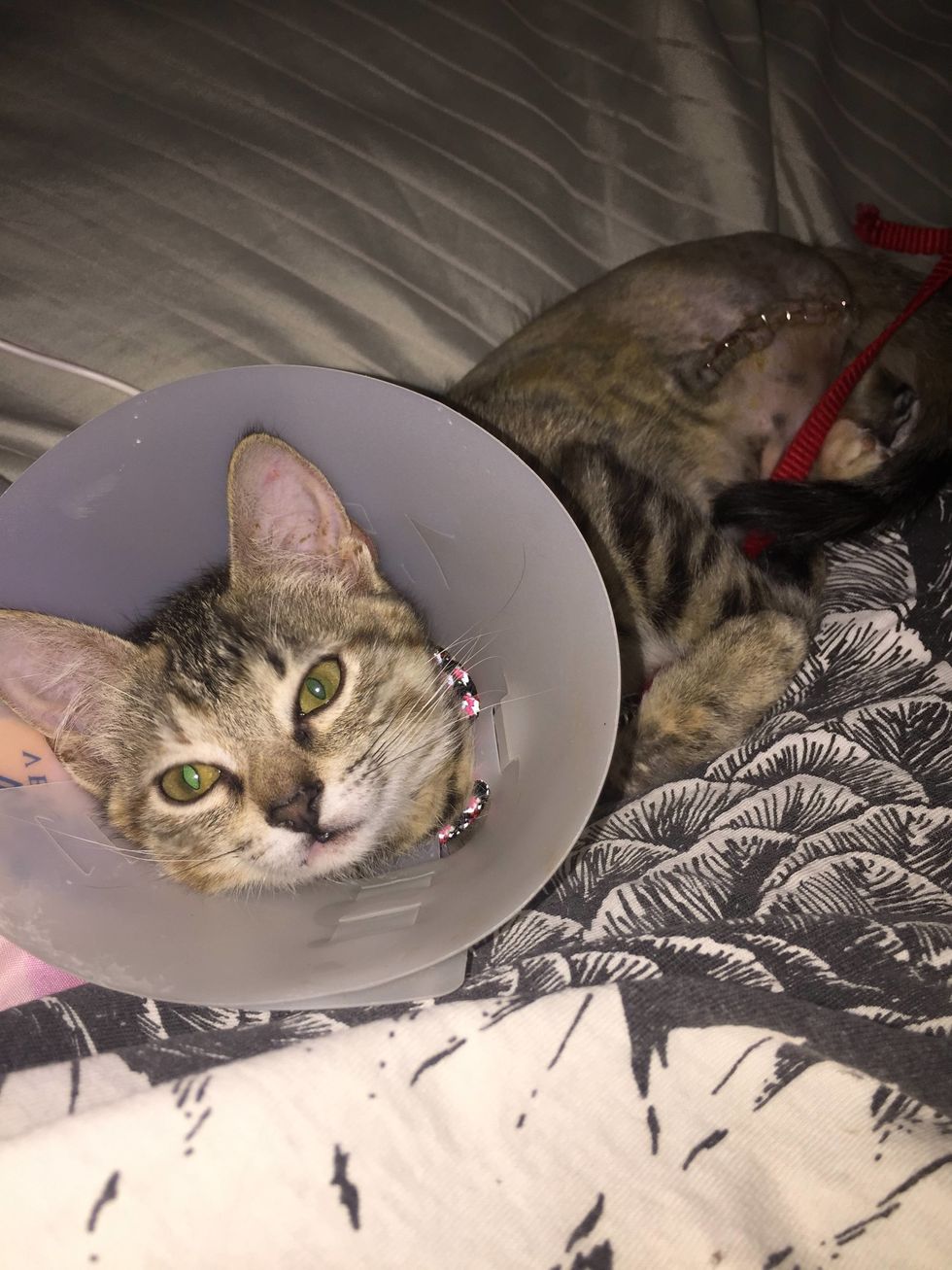 Spitfire met her new brother Misa and immediately took a liking to him, though he was not so sure about the little newcomer.

"Right before surgery he started coming around little by little. She was very persistent. After surgery he just gave in. He could tell she needed comfort. They slept together all day and became very attached to each other," Jaclyn told Love Meow. 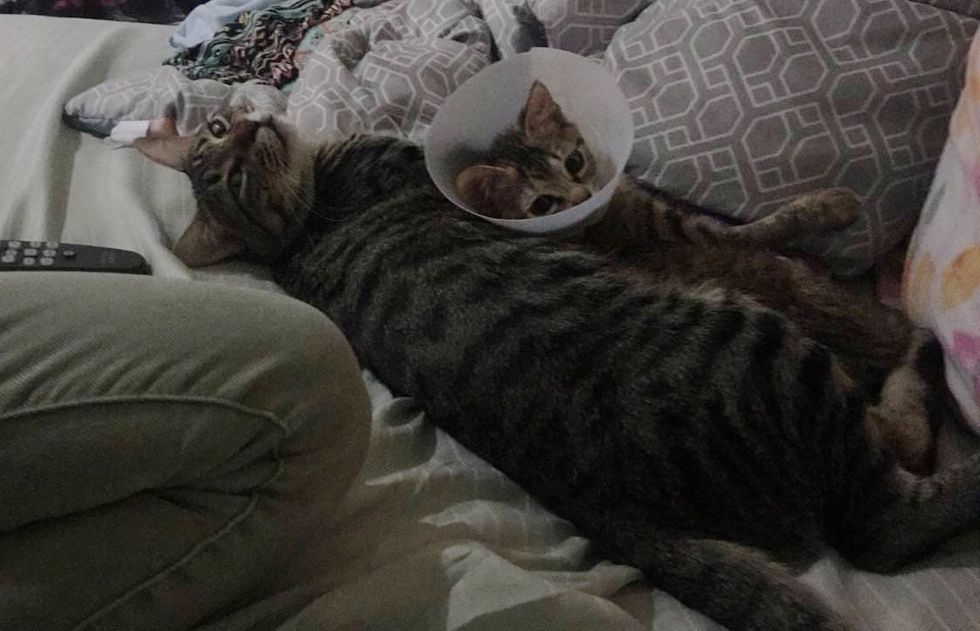 They are now inseparable friends.

Spitfire looks up to her big brother and follows him around the house. 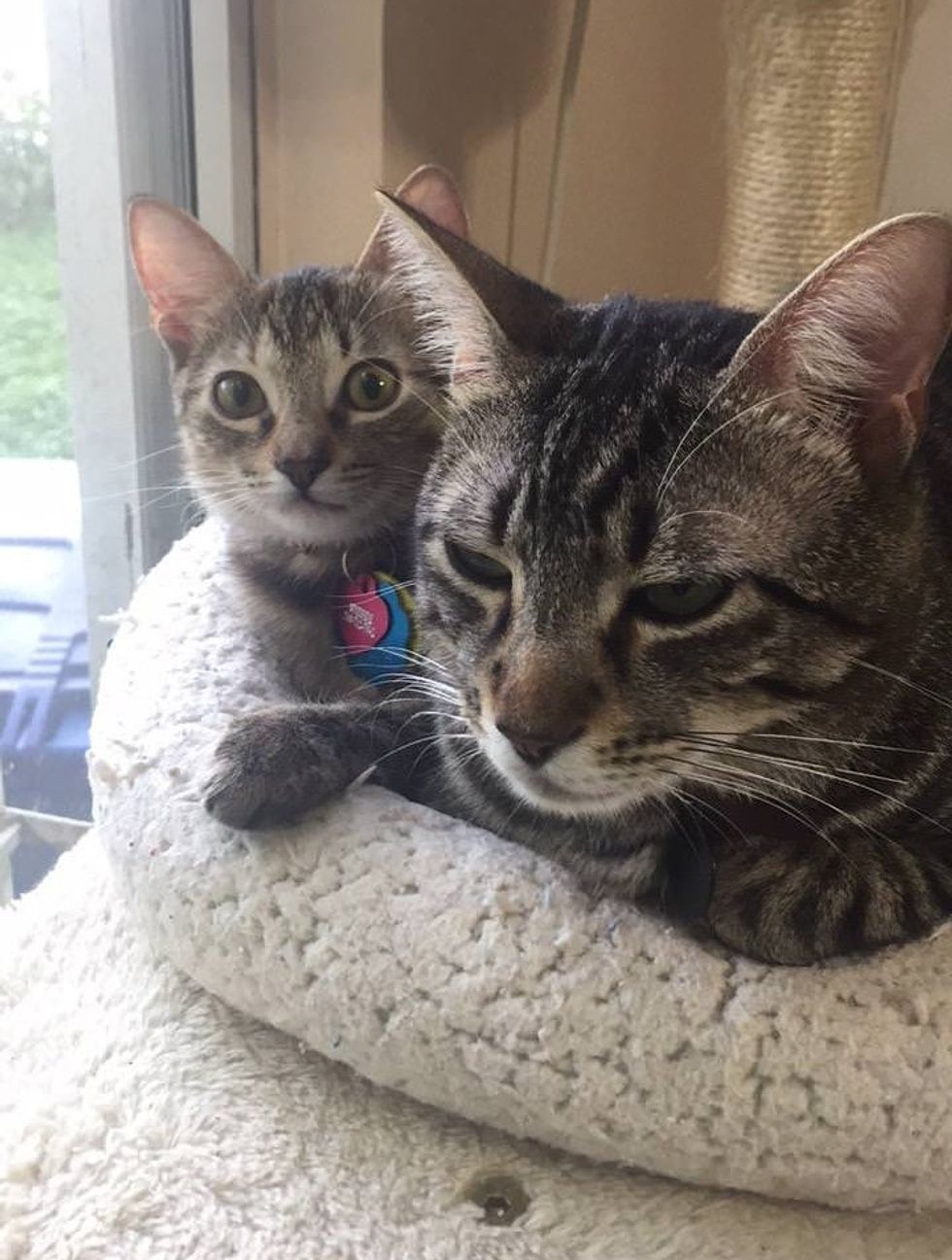 "First time I saw her I knew she'd be mine. She was broken. Most of my rescues have had issues," Jaclyn told Love Meow.

"Now she's extremely affectionate and vocal about it. I couldn't have done it without the help of so many wonderful co-workers and the amazing veterinarian at the rescue facility. We are both forever grateful." 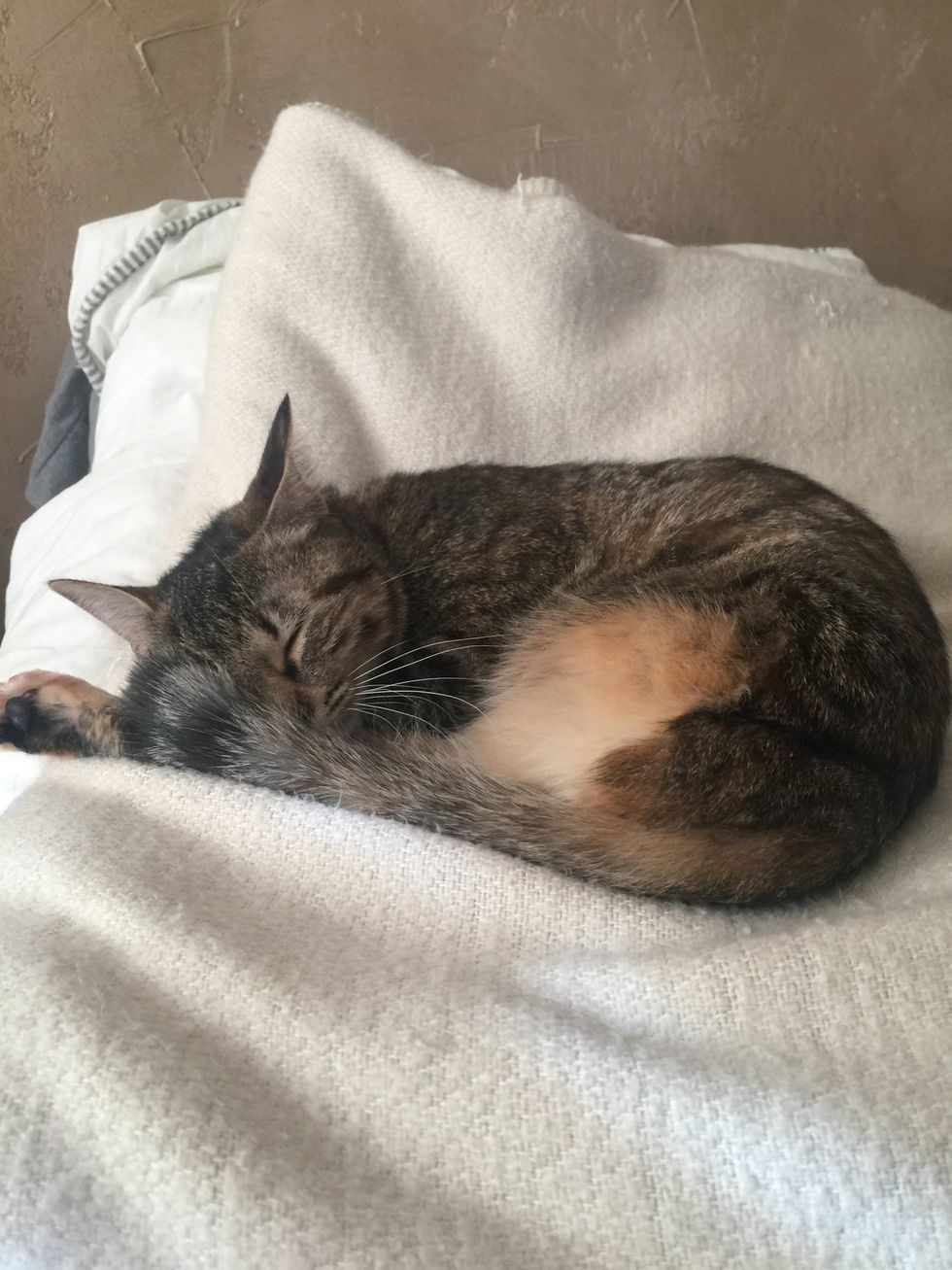 Related story: Shelter Kitty Got Ignored because She Wasn't a 'Whole Cat' until Someone Saw Her Differently