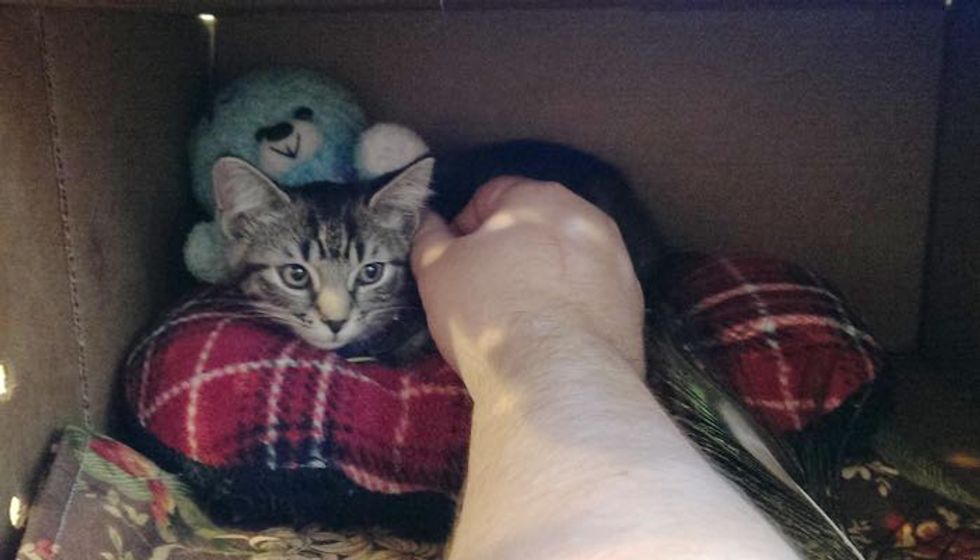 She had waited in the shelter for a long time. Many people passed her by because she wasn't a 'whole cat' until a couple came into her life and thought she's perfect!

Sondra shares the story with Love Meow: "She was skittish and terrified of the people looking for companions. Families were passing her by for two reasons. 1.) She wasn't a 'whole' cat, and 2.) she was hissing and growling at everyone who opened the door to her cage.

She was 10 days out of surgery at this point. I do not know what the reason for the removal of the leg was, and when we heard the second story I stopped asking."

They decided she was the perfect kitty to take home. "I knew that the next time I adopted a cat I was going to get a special needs kitty."

"This is our dedicated cat room, and she immediately hid under/behind the 200+ pound TV."

"She inched her way out after a few hours of solitude to get used to her surroundings/new home."

When Trinity finally came out of her shell, she couldn't get enough of love from her humans.

First meeting with Gaia the cat.

"At this point in time Gaia was 2.5 years old, and Trinity was just a few days over 2 months."

"Trinity and her brother, Chewbacca (Chewie)."

They hit it off very quickly.

"This was when we first got Trinity. The bond these two developed in such a short amount of time was astounding."

"Our cats take care of cleaning the ear that Trinity can't reach, which is just awesome. They sometimes act 'in loco parentis' for her."

"These two have become best buds. While they look it, they are not related."

It's hard to believe this is the same cat they met at the shelter. All it took was a second chance.

Share this story and help a kitty with special needs find their forever loving home!