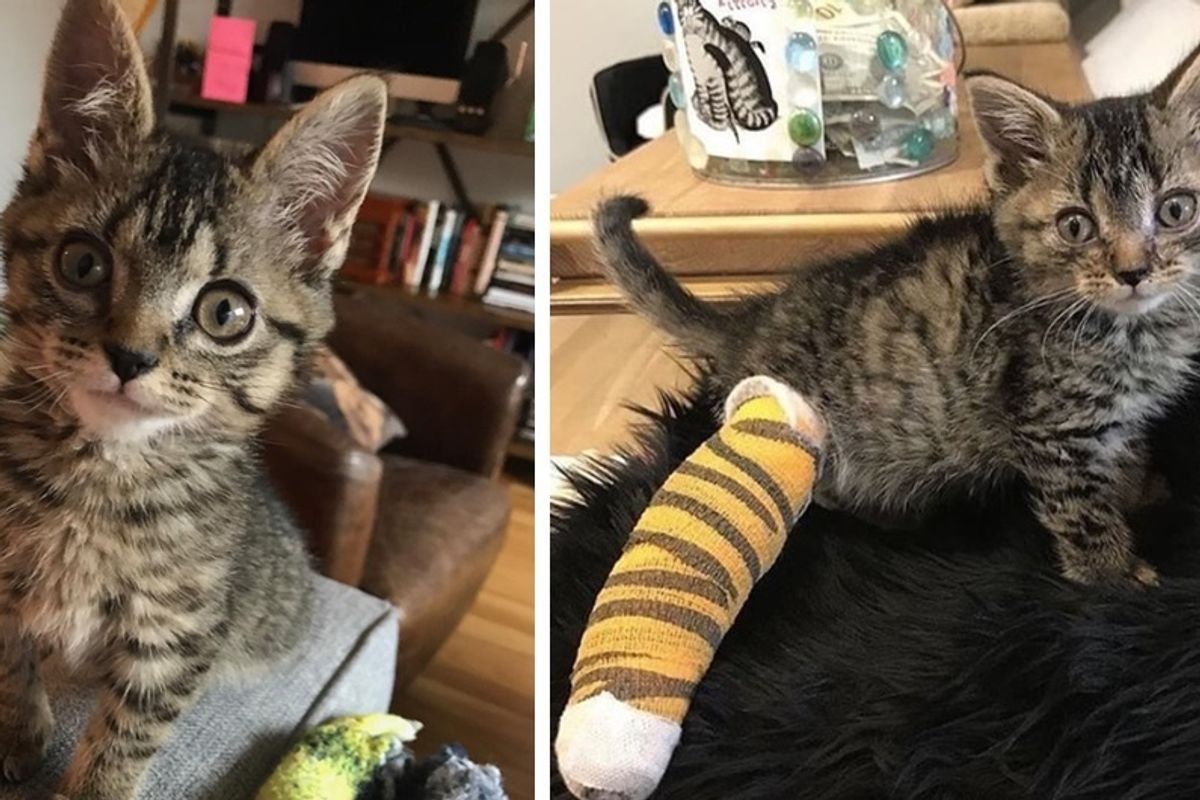 3-legged Cat Saved From a Fence Defies All Odds - She Can Do Anything and More.

A tiny kitten was found stuck in a chain link fence by a passerby in Brooklyn, New York. He saw the tabby hanging by her little leg and rushed to save her.

The Good Samaritan took the kitty to a local rescue group to get her the help that she desperately needed.

Twiggy was just five weeks old when she was found. PS9 Pets took her into their care and treated her injury at the VERG Medical Center.


"It was clear right away that she was a fighter, a true Brooklyn girl born and raised," Amanda told Love Meow. "Twiggy had my heart from the first moment that I set eyes on her."

No one knows how long she was stuck in the fence for, but the little tabby fought hard for survival. "Her little paws were all raw from trying to free herself, and her hind leg, although not broken, had suffered severe nerve damage from her accident."

Twiggy needed to remove her bad leg in order to save her life. At the time, she only weighed one pound. They worried that her tiny body might not be able to handle such a big operation, but Twiggy surprised them all.

"The day after her surgery, the doctor called and said I could take her home from the hospital because she was recovering so quickly and just wanted to play and snuggle," Amanda told Love Meow.

"We were told that she would adapt quickly after her surgery, which she did because she was so young, but soon we realized that Twiggy is here to defy all odds, she wants to prove everyone around her wrong." (Scroll down for video)

Amanda and her family were prepared to help the little tripod kitty adapt to her new environment. They weren't sure if she could run, jump or climb like other cats, but Twiggy showed them on day one that she could do anything just like a 4-legged feline, and more.

"Twiggy can do all of those things and more! Nobody ever told Twiggy she couldn't do these things, so she just does them without fear," Amanda told Love Meow.

"For her its normal to have three legs, and she is not at all aware that she is different. She is the perfect embodiment of resilience in the face of adversity."

"Many people hear about her amputation and feel badly for her, but Twiggy is not defined by her circumstances. She is the most affectionate, mischievous, courageous, and loving animal I have ever met."

Twiggy has claimed the title as the queen of the apartment, aka her very own amusement park. She runs the place like she owns it.

"She spends every minute of her day exploring new areas, jumping to the next highest shelf, learning how to reach countertops and windowsills," Amanda told Love Meow.

The little tripod kitty never ceases to amaze her humans with what she can do - there's no limit.

"Twiggy loves to be held and snuggled, she wiggles herself under the covers of our bed every night to sleep. She also is very vocal in the cutest way, she is always purring, chirping and meowing to us."

"Her favorite pastimes, are playing with her favorite mouse on a string, breaking into her stash of treats when nobody is looking, hiding her toys in any empty boxes she can find and running laps through the hallways of our apartment building," Amanda told Love Meow.

She fills their lives with endless entertainment.

"Having a special needs pet like Twiggy has taught us so much in the short amount of time we have had her," Amanda told Love Meow.

"She was given the chance to live and be loved, and she gives that love back to us in more ways than we ever could have imagined."

Related story: Tripod Cat Abandoned Outside Shelter Was Terrified Until She Found Someone She Loves