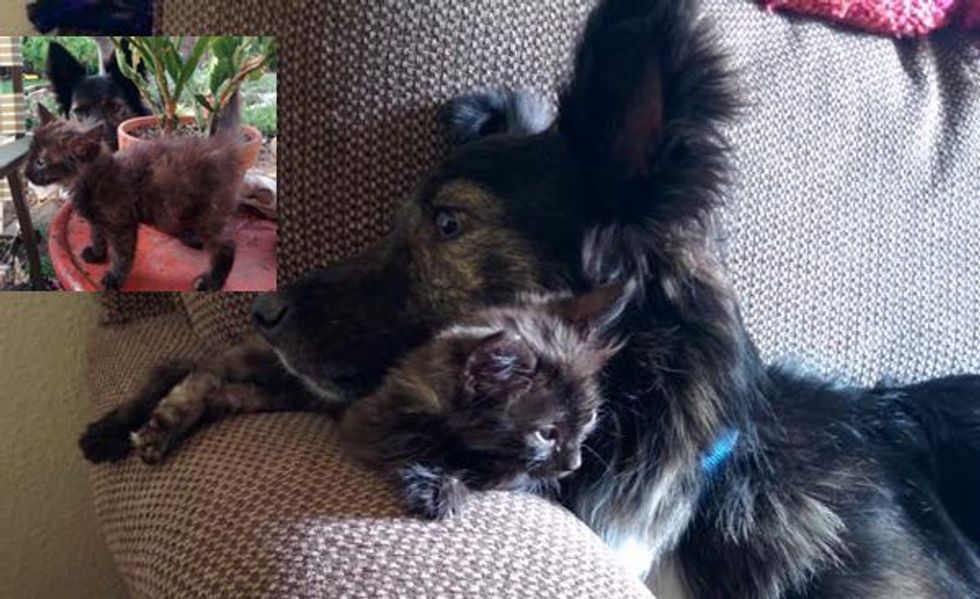 When They Started Fostering This Kitten, Their Dog Became Attached!

When they started fostering this tiny kitten they rescued, their dog was obsessed and became  attached to his little feline friend.

When they started fostering this little kitten, their dog Deets was obsessed!

"My daughter was in the vicinity when a homeless woman went unconscious. She had the kitten in a cardboard box and my kid brought it home to avoid the authorities taking it to the shelter," reddit user HellaOld wrote. The homeless lady was in no condition to care for a sick kitten, so they decided to help.

"(The kitten) had a respiratory infection and would have been doomed. We vetted her and got the infection under control and posted her on Facebook."

He followed her everywhere she went.

Right after they brought the kitten home, their dog Deets quickly grew attached to the little fur baby and became her full-time kitten-sitter. "If I lost track of her in the garden, I'd tell him to 'get the kitty' and he'd herd her out in the open."

He watched over her when she was playing in the garden.

"We're all getting attached to her, but she's headed off to her forever-home... They have a blind dog with a chicken best friend.... It's been really fun having this visitor though," they wrote.

Deets was her full-time kitten-sitter. He wouldn't keep his eyes off her.

"He's back to obsessing about his ball now. Ball is the cure. He's all better... We will miss her though. She's already having a blast at her new house and they are totally in love with her," they added.