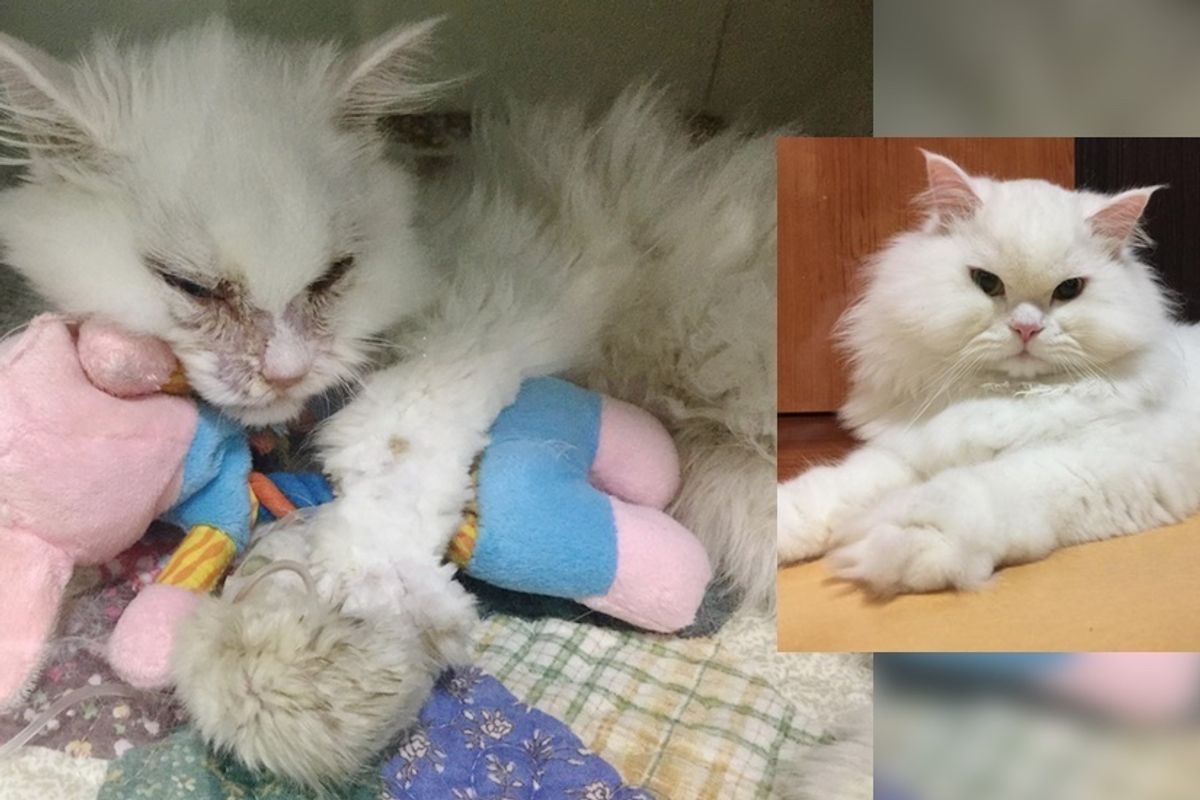 Woman Gives Cat a Chance While Others Say He's 'Not Worth It', a Month After Rescue...

They said this kitty would not be able to survive, but a woman saw the fight in him, rescued him from certain death and gave him a second chance he so deserves. 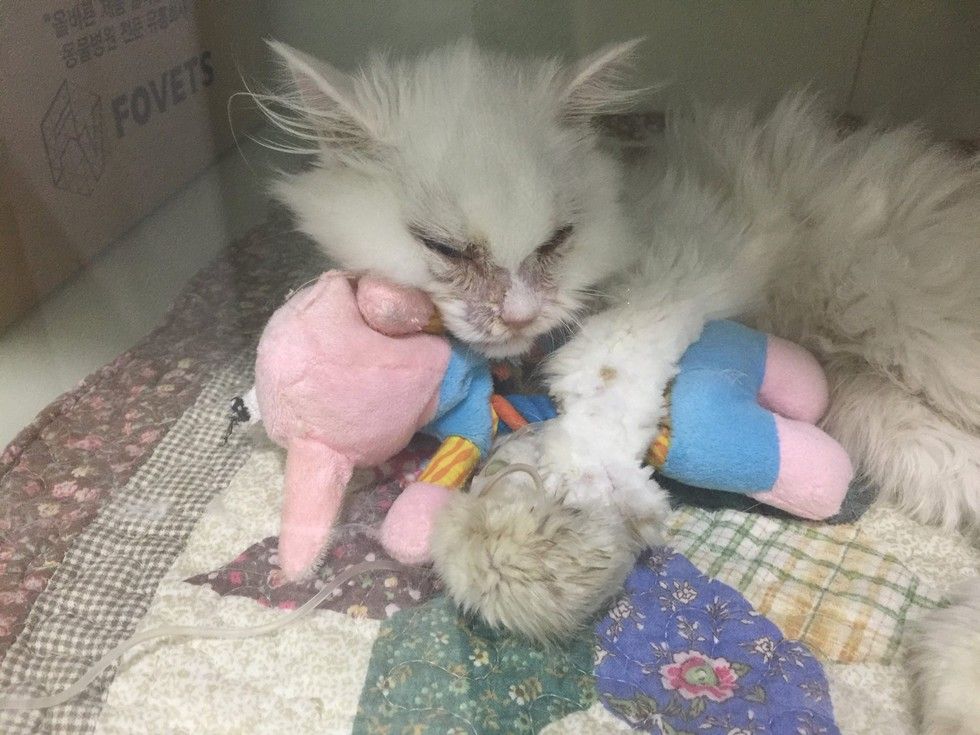 In late June, a starving stray cat was found in an alleyway and taken into a kill shelter, facing an uncertain fate. "Two days later I saw its profile on the shelter listings online and decided that I needed him," Rachel Brown said.

"His profile said he was dehydrated, emaciated, and had a severe upper respiratory infection." When she went to visit the cat, the shelter owner warned her that his treatment would be very expensive because he was very sick, and discouraged her to adopt him, saying it was not worth it.

"That basically solidified my decision and I told him I would be there the next day to pick him up," Rachel said.

On June 26th, Rachel got the kitty out of the shelter and took him to the nearest emergency 24 hour vet. 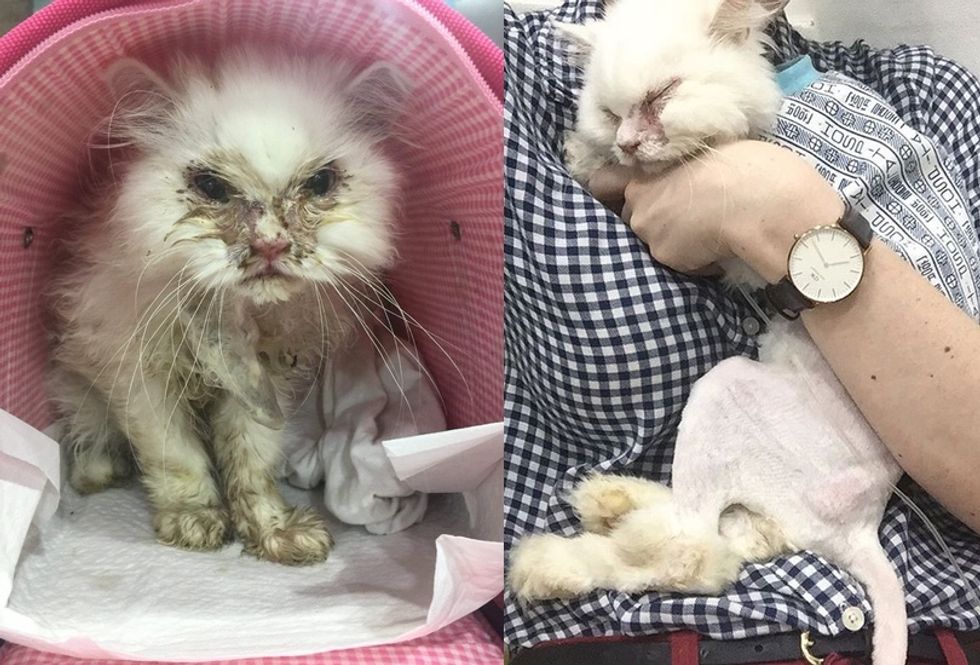 "As soon as I arrived I just showed them the cat and I had 4-5 people in the exam room tending to him. They took his blood and tested it. He came up coronavirus positive," Rachel wrote.

"They cut off some of his matted fur and cleaned his face with a fine tooth comb. He weighed 1.5 kg (3.3 lbs), and they said he was 1-2 years old. He had ulcers in his mouth and inflammation throughout his body."

The vet took Rachel into their office and told her due to the severity of his illness the kitty probably wouldn't make it and it was up to her to make the decision. Rachel was determined to save him. 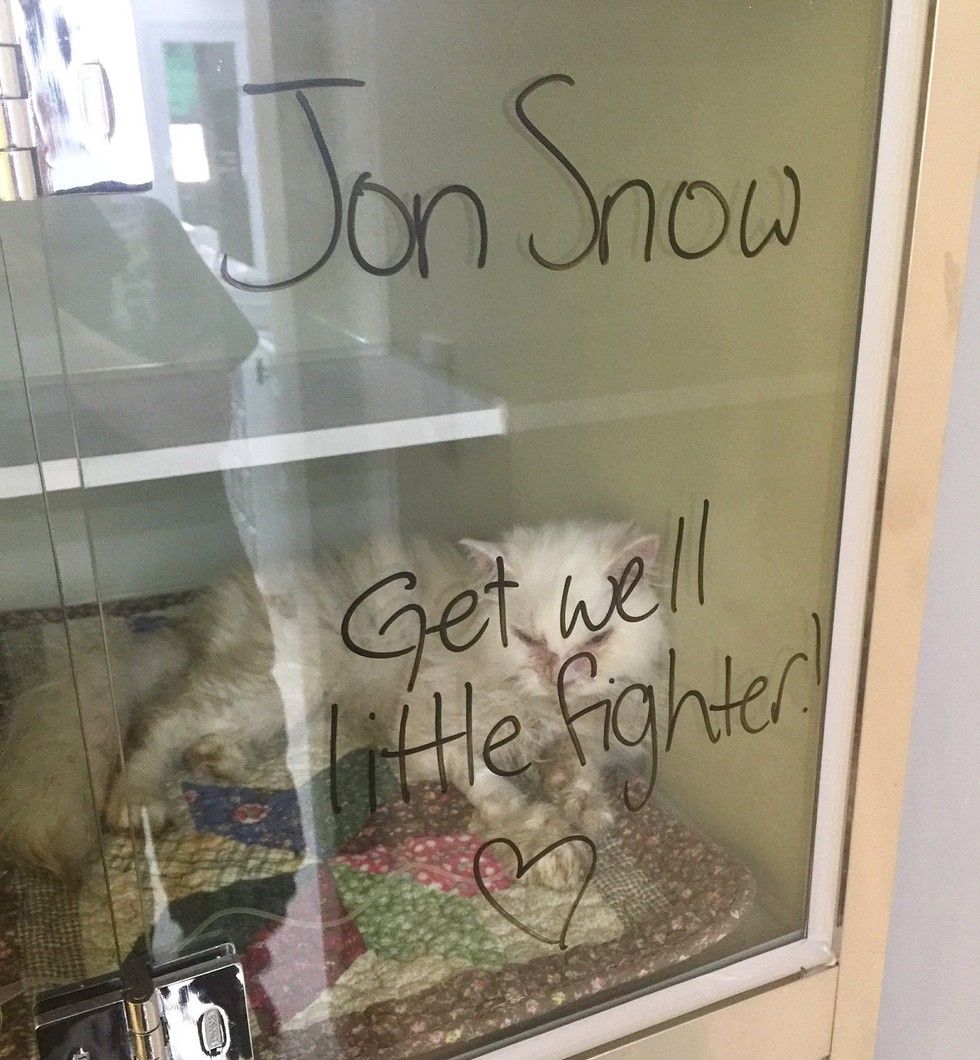 "I chose to treat him. I checked him into the hospital. For 5 days he was in the hospital. It was a 30 minute train ride from my town but I visited him every day after work.

"On the second day he was weak but stable. He hadn't eaten any food, but the IV hadn't caused him to throw up again either. On the third day he started to eat. I stood by his cage and said 'eat Jon', and he sniffed his food and started eating it. BEST thing ever." 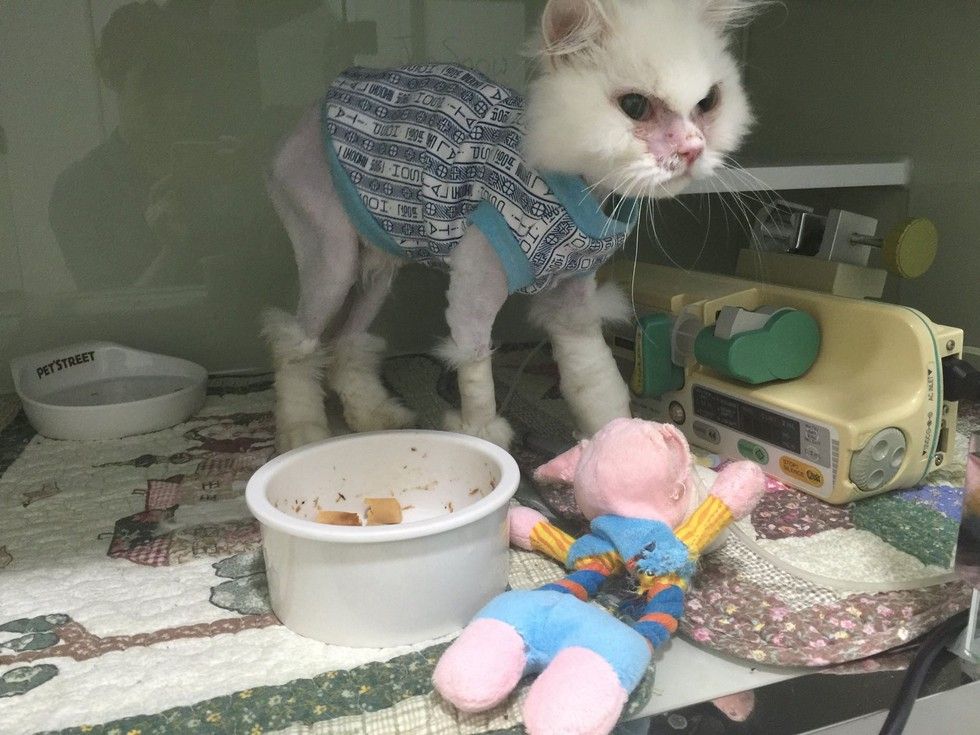 "On the fourth day he started playing and exploring in the exam room. On the fifth day, they tested his blood again and his levels were NORMAL."

The vets said they had never seen a cat improve as fast as Jon did. Rachel knew from the start he would pull through, and he did. 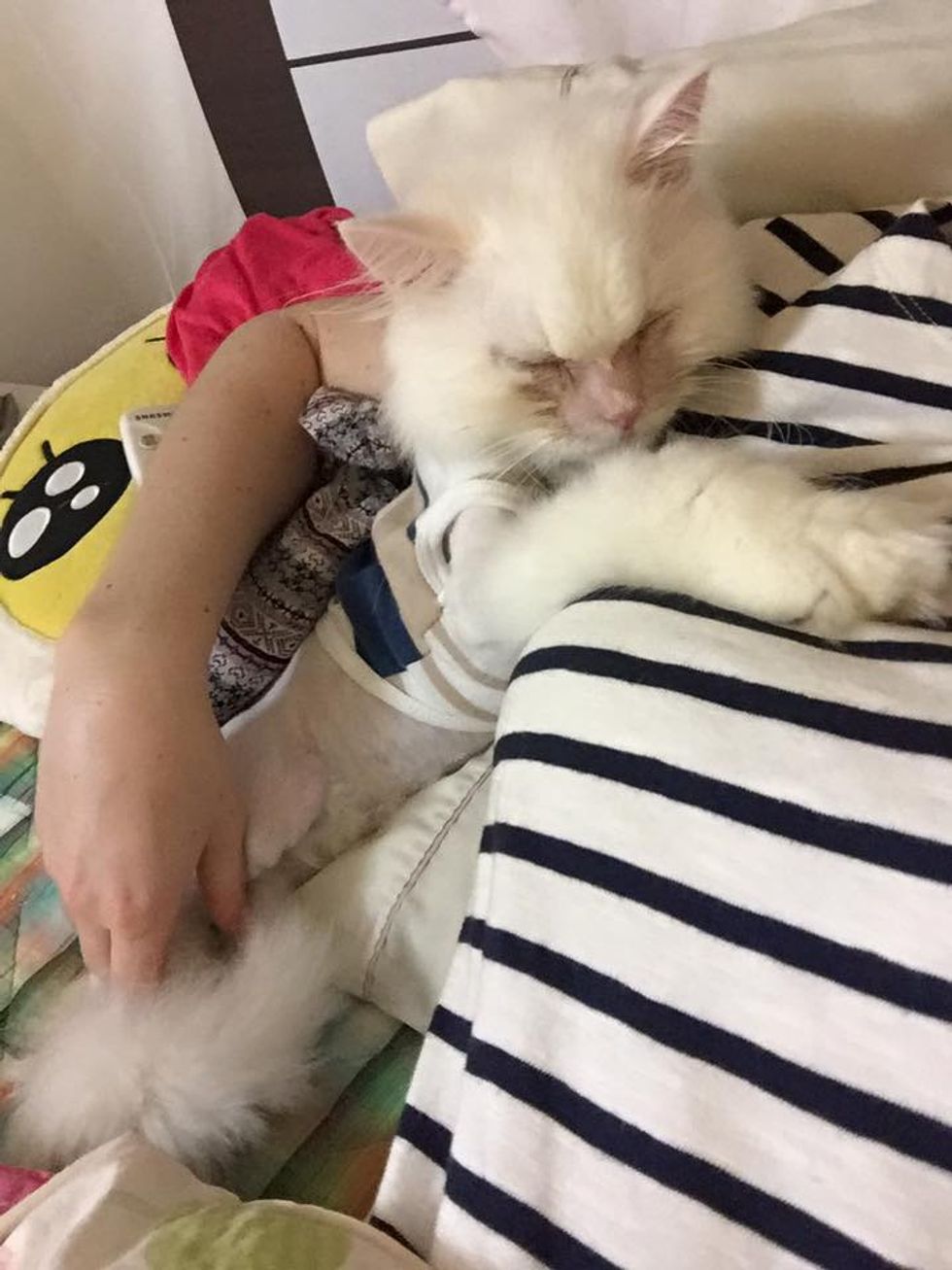 "I was able to take him home on the sixth day. At home, I gave him medication for his inflamed stomach and URI, anti-bacterial and steroidal eye drops, anti-fungal cream on his face that had lost all it's fur, and liver supplements."

Jon surprised the vet how much he had improved every time he went back for a checkup. 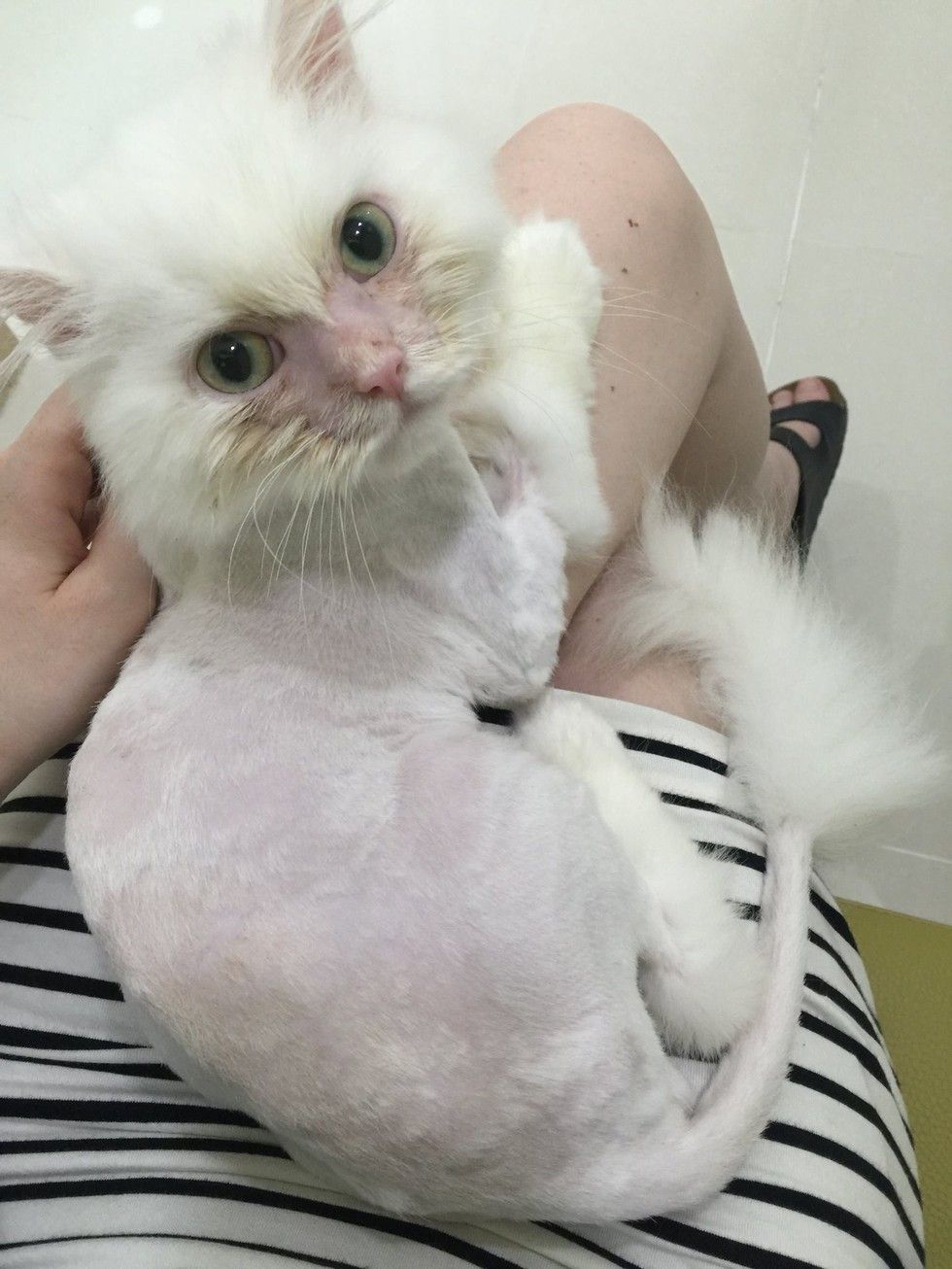 After several weeks of treatment and vet visits, his infection was gone for good.

"At his check up one week later, the vet said Jon was so healthy, all he needed was liver supplements every other day." 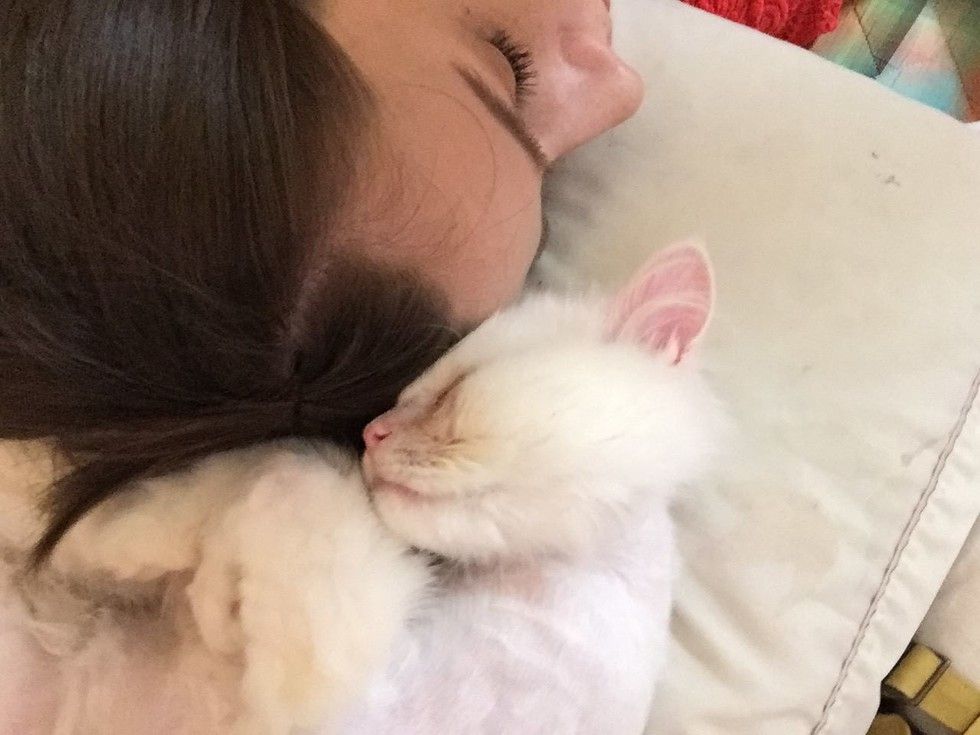 "I have watched Jon improve every single day from the day I got him and he is truly a little miracle," Rachel said.

"He loves to play with his toys and his boxes. He loves to eat his food and drink water. He never had to be litter box trained." 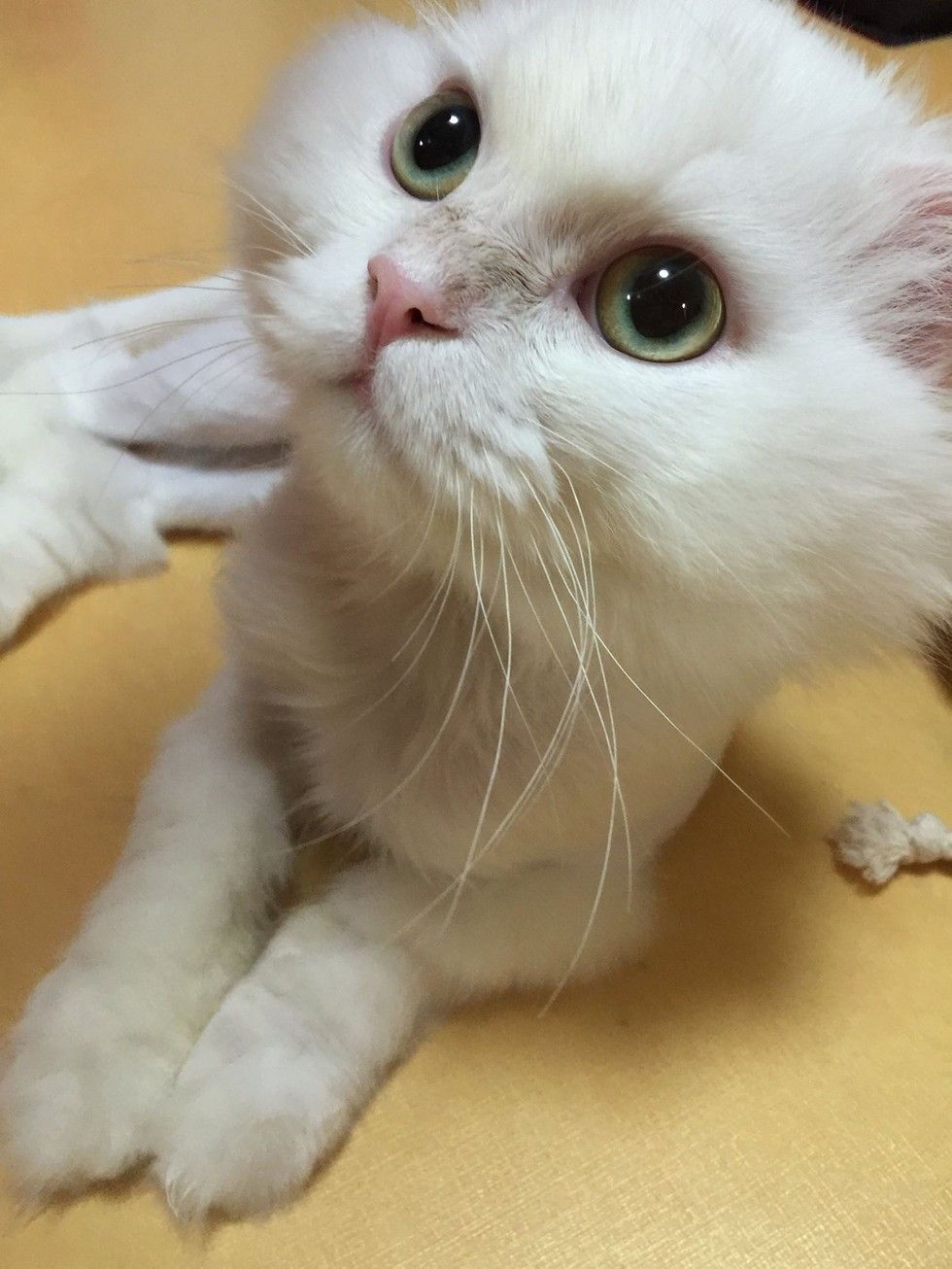 "He follows me around my apartment and always wants to be near me. He sleeps with me in my bed and sometimes right on top of my head on my pillow.

"He loves to roll over on his back and get tummy scratches like a little puppy. He talks to me so much in little chirps." 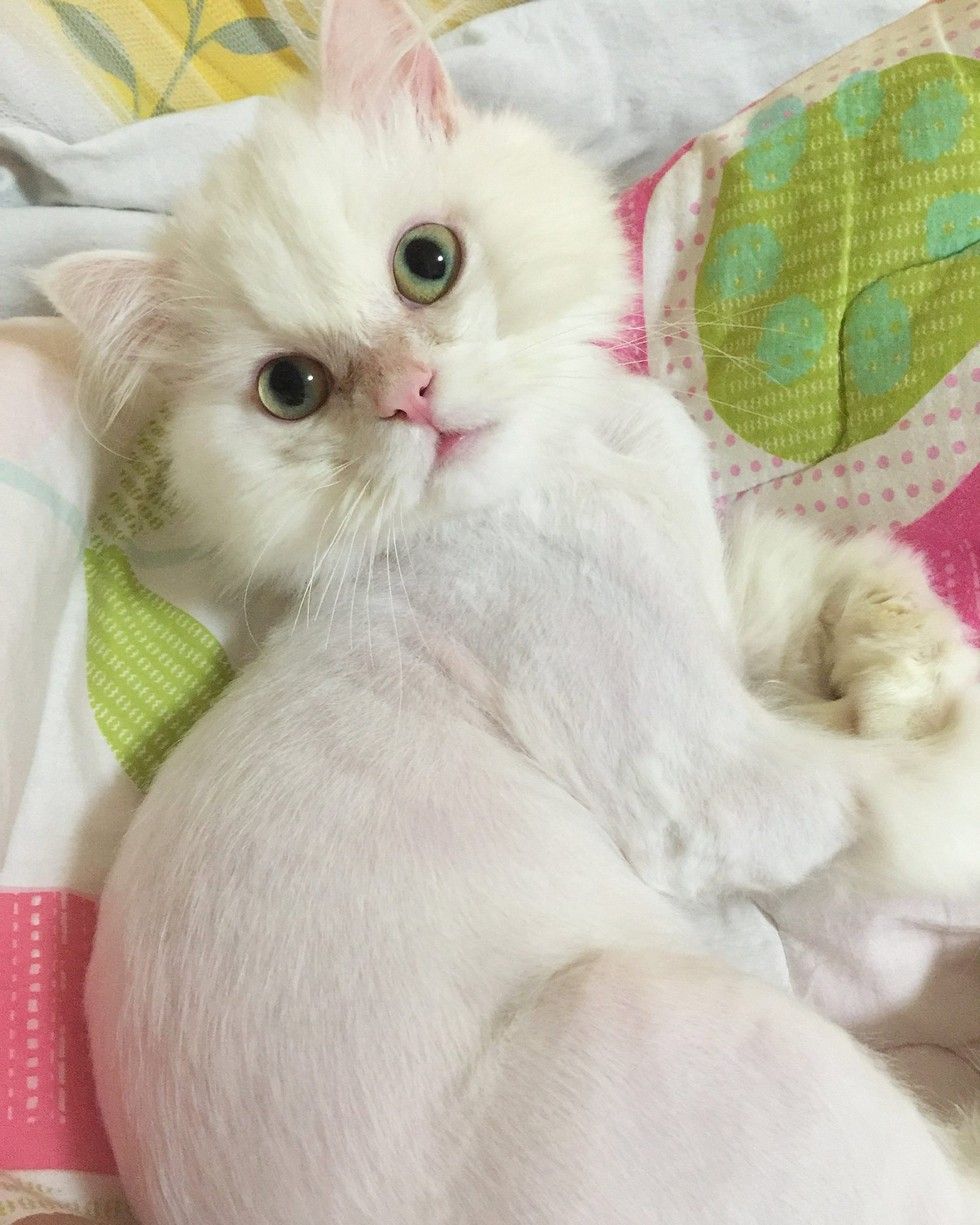 Jon snuggling with his human mom, purring up a storm. 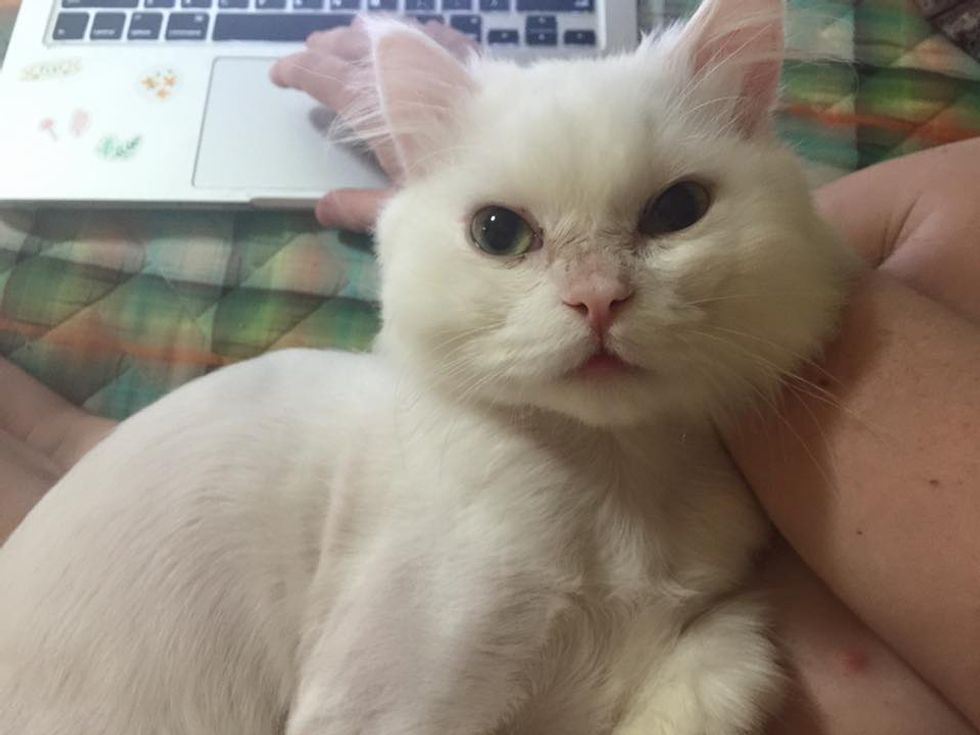 A month and a half later...

No one believed that this kitty would survive, but Rachel knew he just needed a second chance, and now he's thriving with love.

"He's such a curious and sweet kitty, and I love him with all of my heart!" 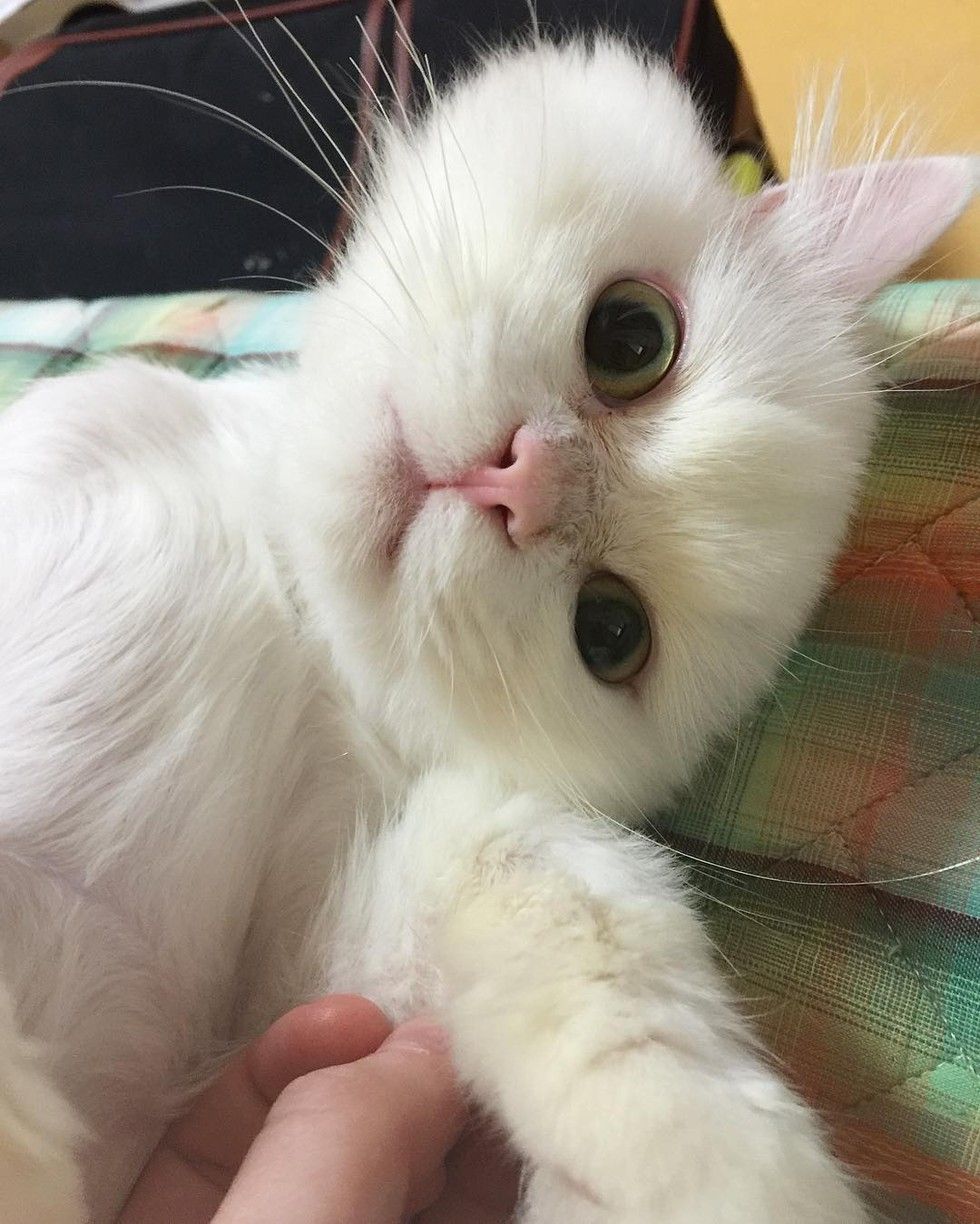 He's blossomed into a fluffy cat!

Jon is having his first Christmas at his forever loving home! 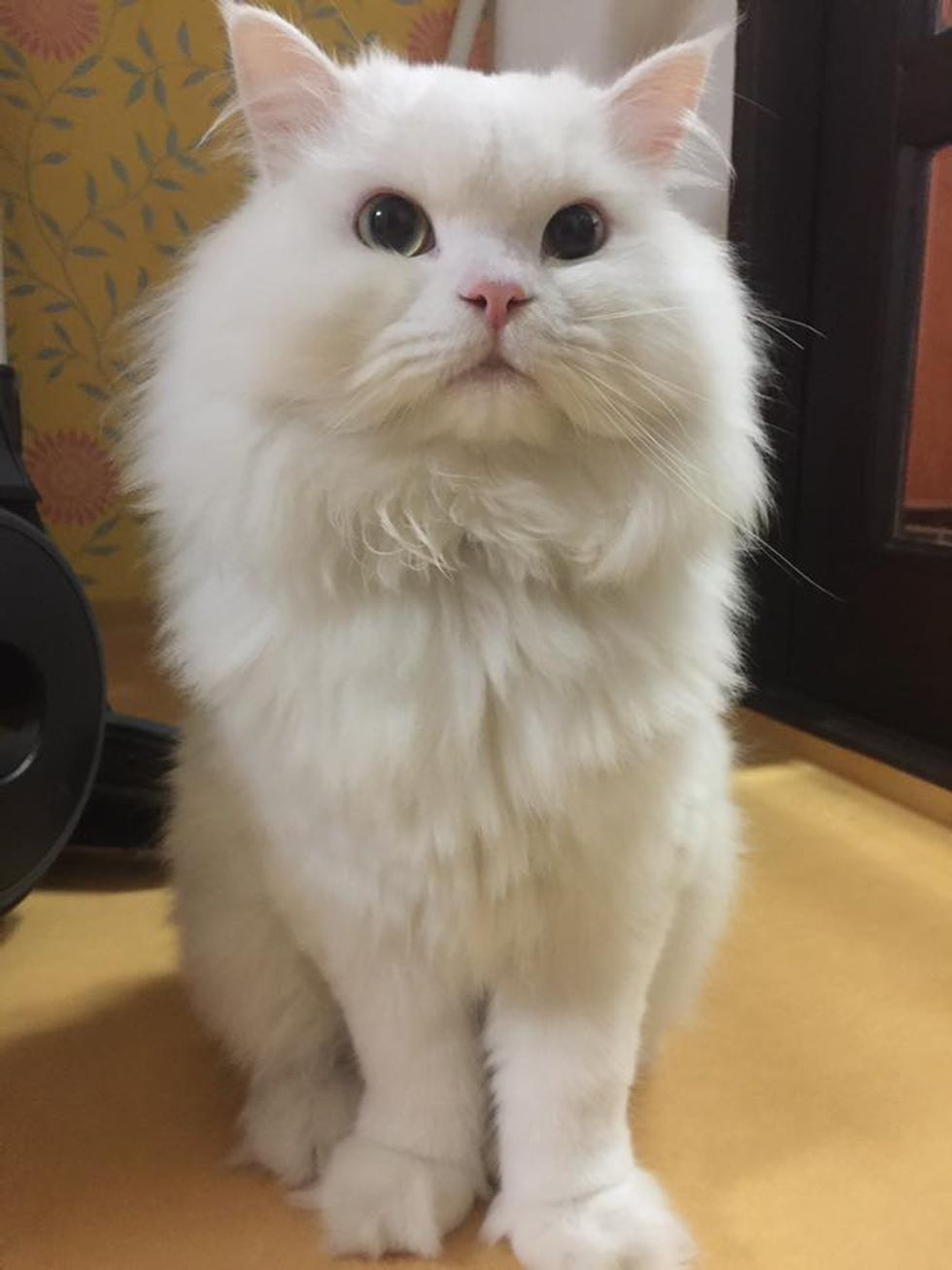