A tiny kitten wandered onto a young man's doorstep crying for help last week. He took the little stray to the vet and returned for him when he got better.

Now the kitty doesn't want to go anywhere but to be with his human. 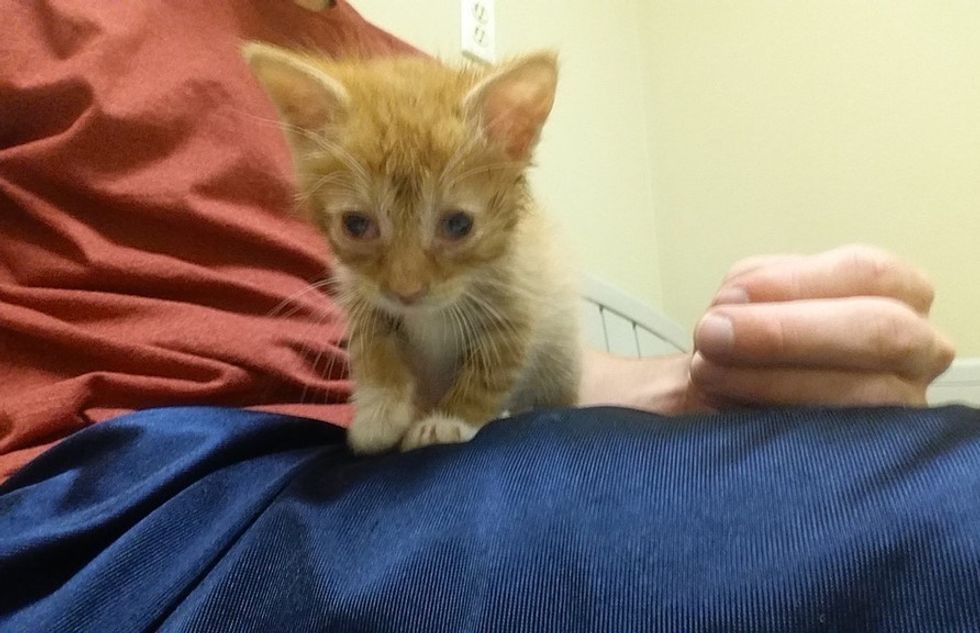 It was a really hot day in Florida. Sean Carroll woke up to something meowing outside his window. As he left for class that morning, he saw a tiny kitten standing right there all lost, alone and afraid.

"He seemed like he was blind when I found him because of the infection in his eyes," Sean told Love Meow.

The kitten was skin and bones. Sean took him to the vet, and they let the kitten stay for a week so he could get the proper care and medical treatment he needed to recover. 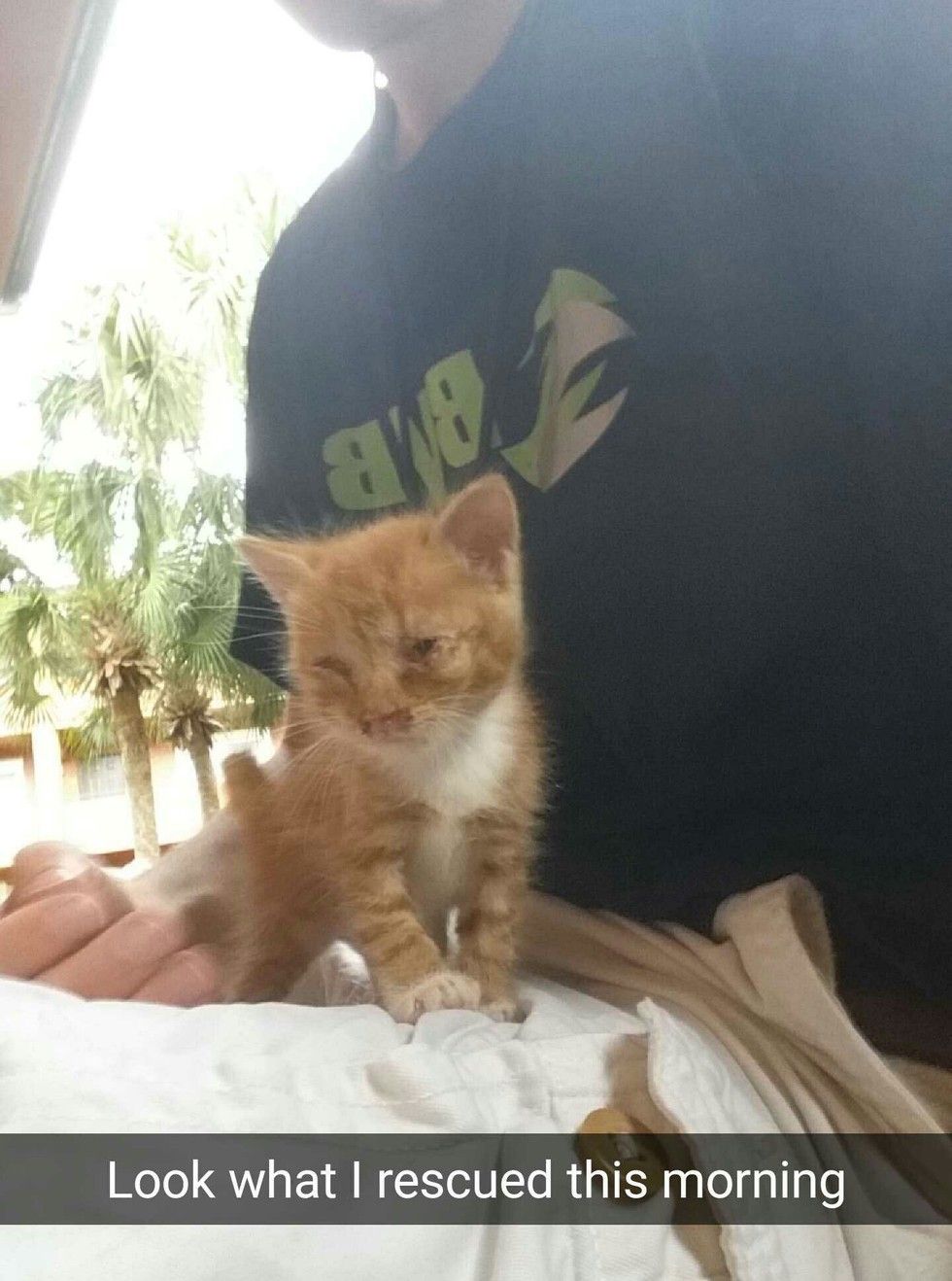 "The vet was so gracious and wanted to see me take him home that they paid for the meds out of pocket. I wouldn't have been able to afford Sunny had they not been so amazing!" Sean said.

Sean brought him home, and Little Sunny crept his way into his heart. 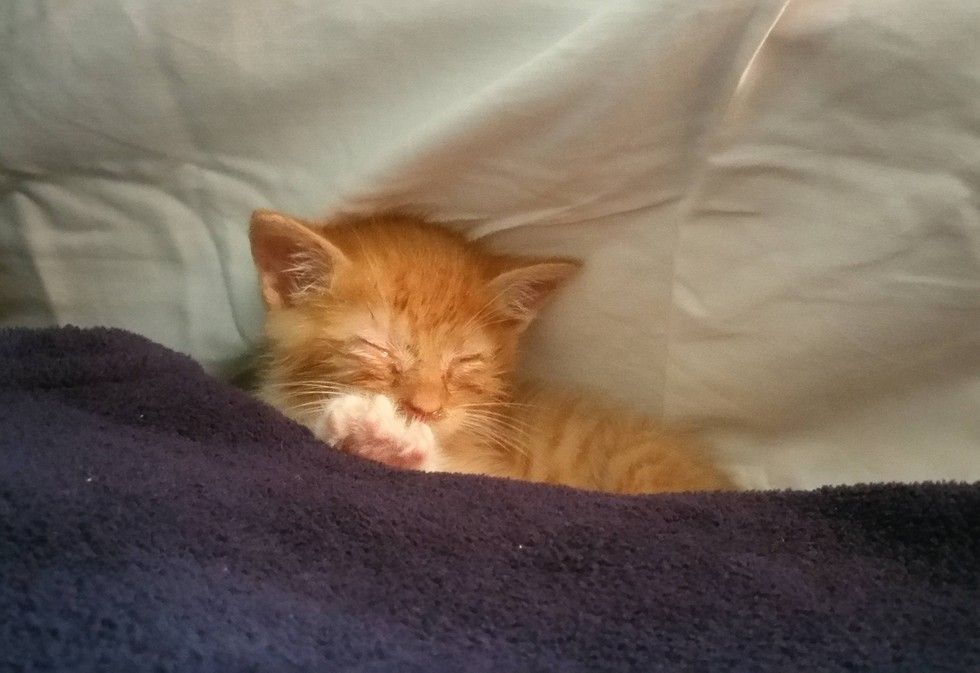 "I've only had him for 24 hours and I cherish him like a child. I love him so very much! I feel bad when he squirms around and cries while feeding, but I want him to be nice and healthy.

"He's running around, practicing his pouncing, and loves to climb on people and furniture. If you lay down he will not hesitate to start climbing up your belly and sit right on your collar bone," Sean told Love Meow. 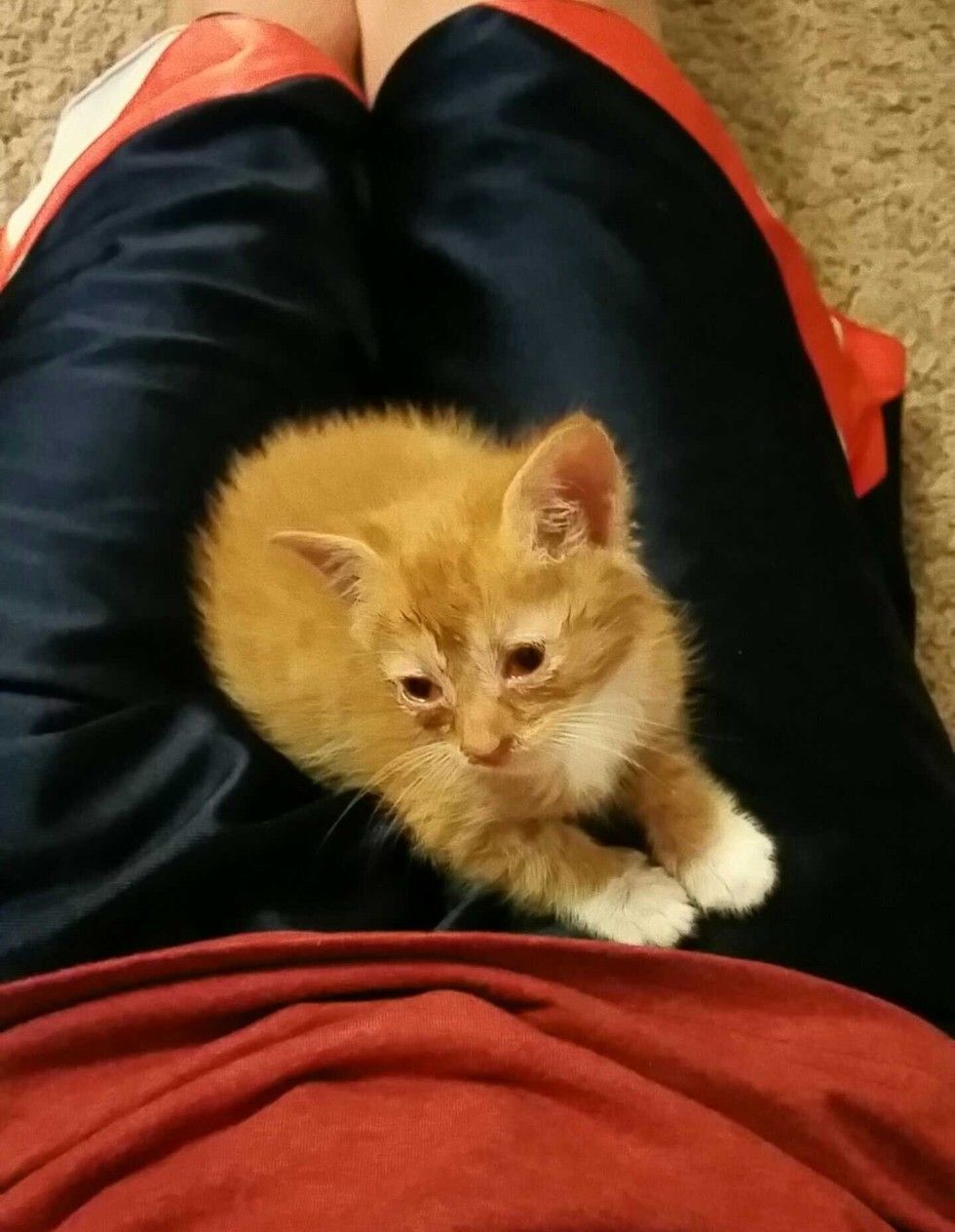 "Whenever I'm walking around he will follow me around my apartment and loves to be held and picked up.

"He's definitely not big enough to jump from my couch to the floor, so I put my hand out in front for him to climb onto. Then I'll lower my hand until he feels comfortable to jump onto the ground or table," Sean said. 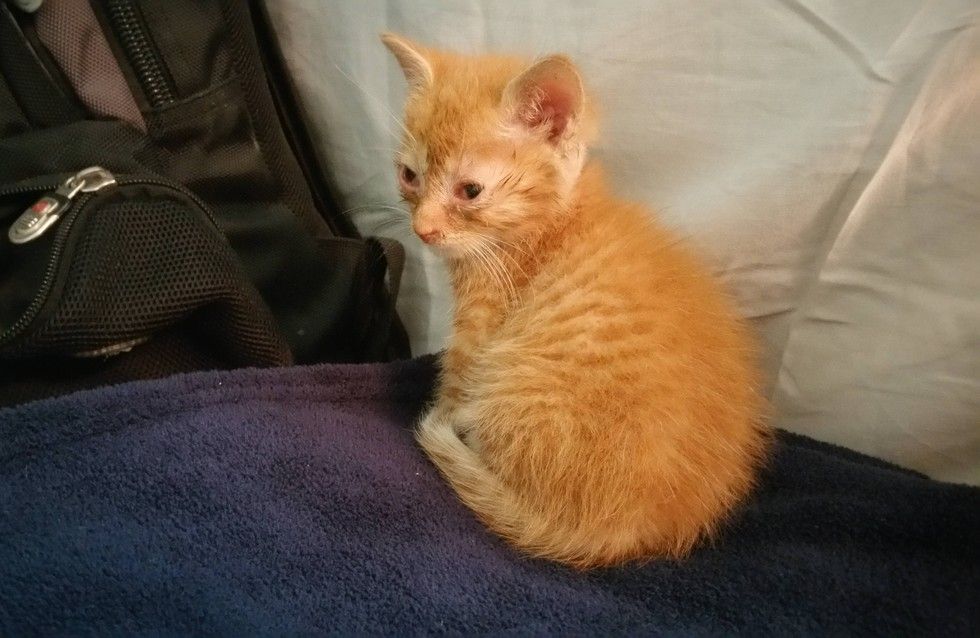 "All of my previous pet cats have been more than 8-10 months old when my family adopted them. Now that I'm on my own raising this guy is a task, but man does it feel good," he said.

"I'm used to living with 3 cats back home. Going 4 months without having a cat around feels weird. Things just got 1000% happier around here. All the neighbors are coming over to see and play with Sunny.

"I wasn't planning on owning a cat until after Christmas break, but it seems like Christmas came early this year."

The kitty falls asleep on his chest at least three times a day. 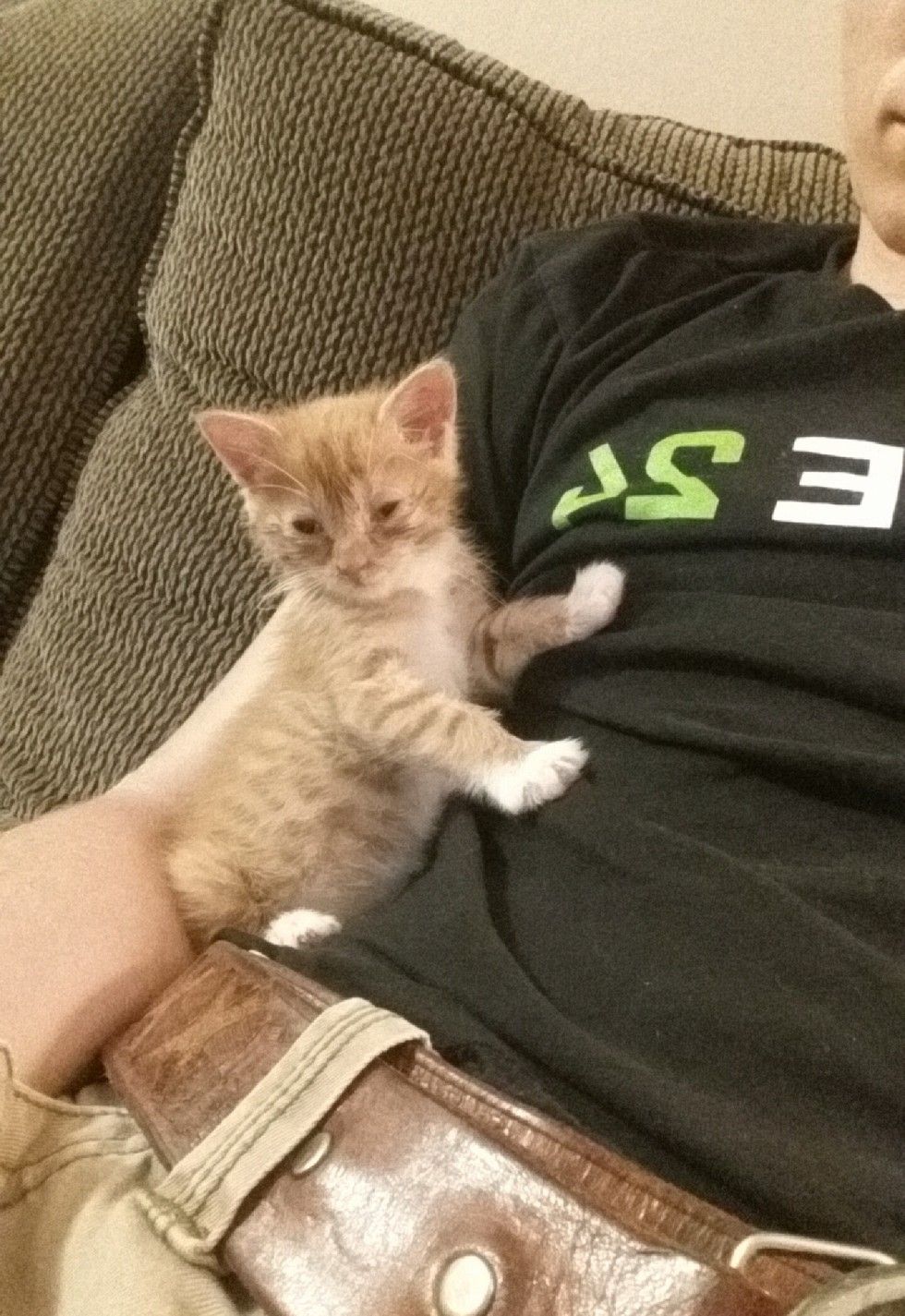 "Right now I give him his morning medicine for his respiratory infection. Then I clean his eyes and apply the ointment. Afterwards he gets some nice yummy canned kitty food with vitamins mixed in. When I come home from class I will usually play with him for an hour then give him a second application of ointment for his eyes, then let him go take his nap.

"Around 7 I give him his second dose of respiratory medicine. Play with him a little more, then let him take another nap… Then give him his third and final application of ointment for his eyes. Give him another bowl of canned kitty food and vitamins and he's out."

Sunny has become very attached to his human. "He's latching on harder everyday. He follows me around, he enjoys riding on my shoulder. He's a great companion already." 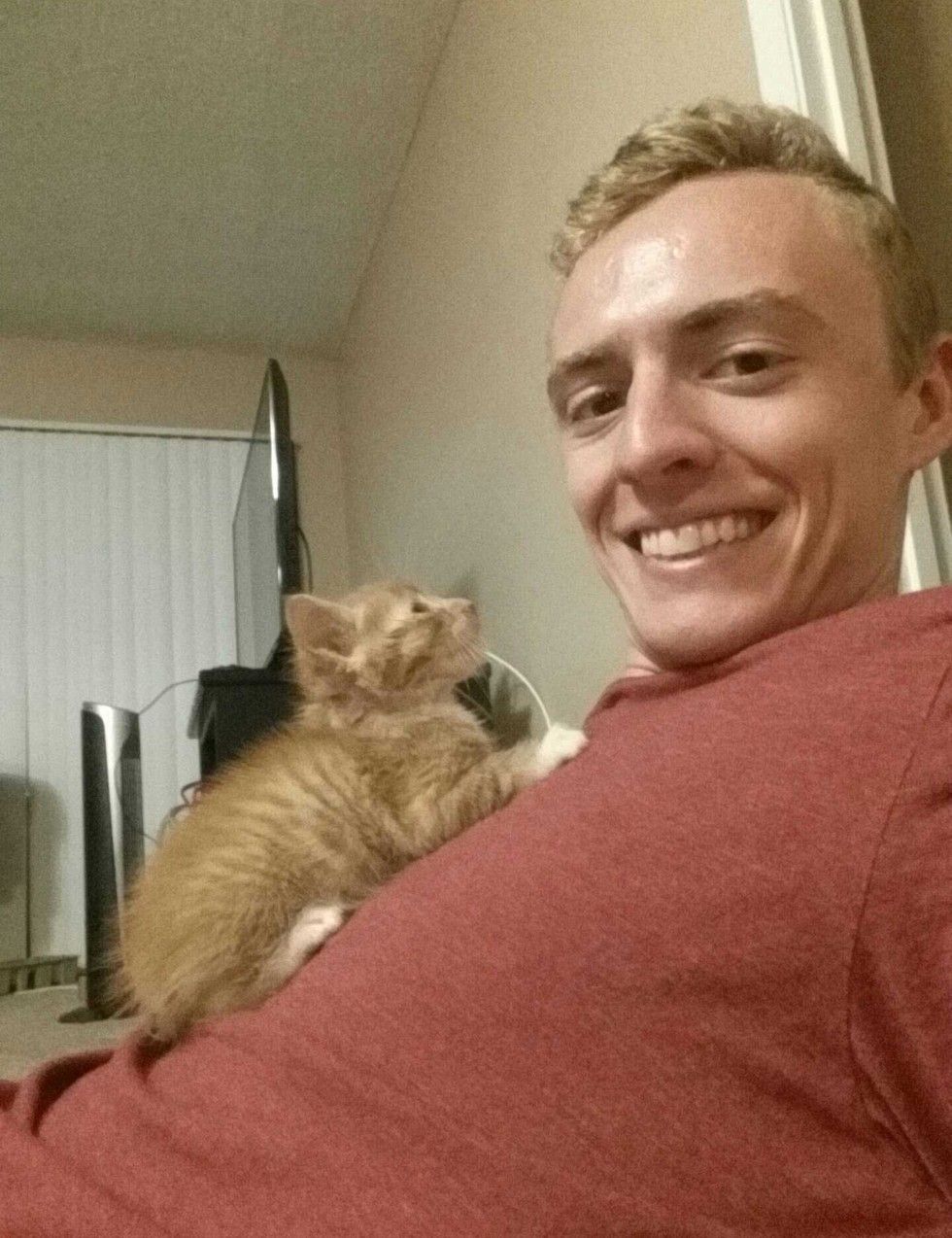 "The doc said,'if he eats all his meds he'll be back to full health in 10 days.' He's got 8 days of meds left and he keeps looking better and better each day.

"He's eating like a champion and is going in for another check up on Tuesday. Hopefully he'll be fully recovered by Wednesday," Seantold Love Meow. 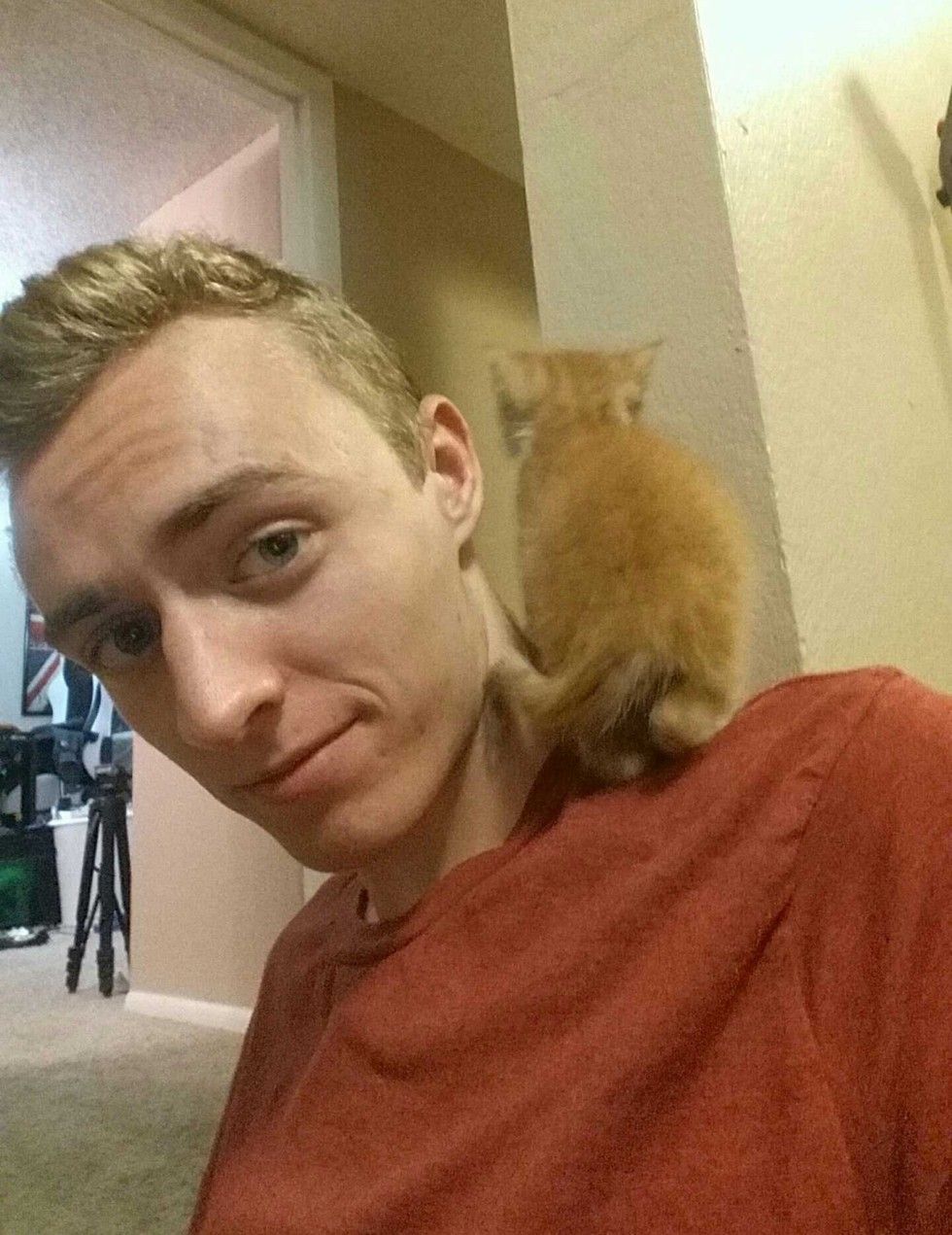 "He is just the happiest ball of fuzz right now running around... As long as you give him food he'll love you forever." 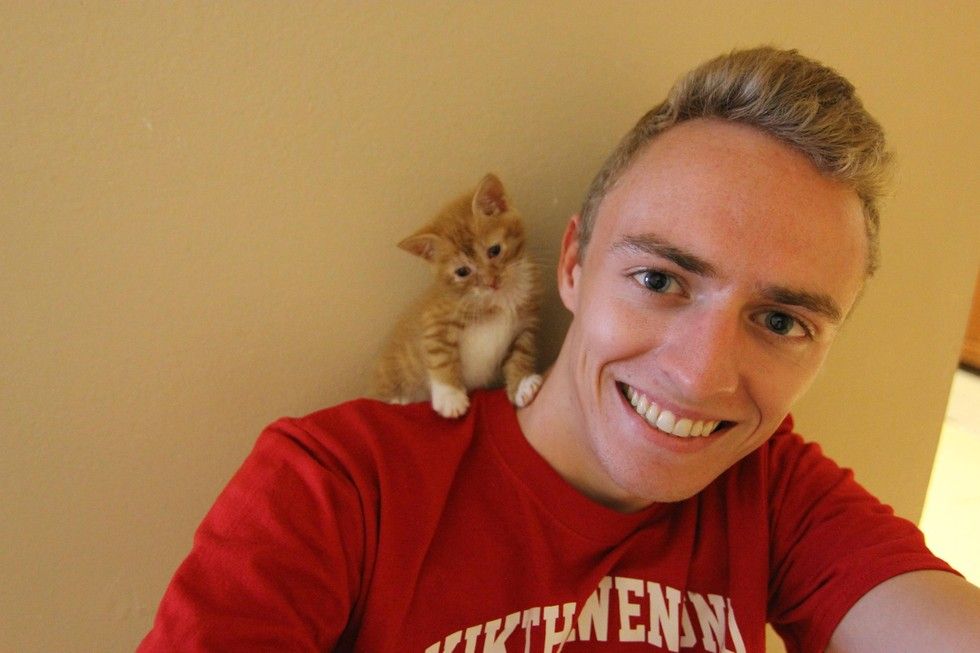 Real men love cats! Share this story with your friends!

Related story: Man Built a Shelter for Neighbor's Cat Left Behind, This is What He Found