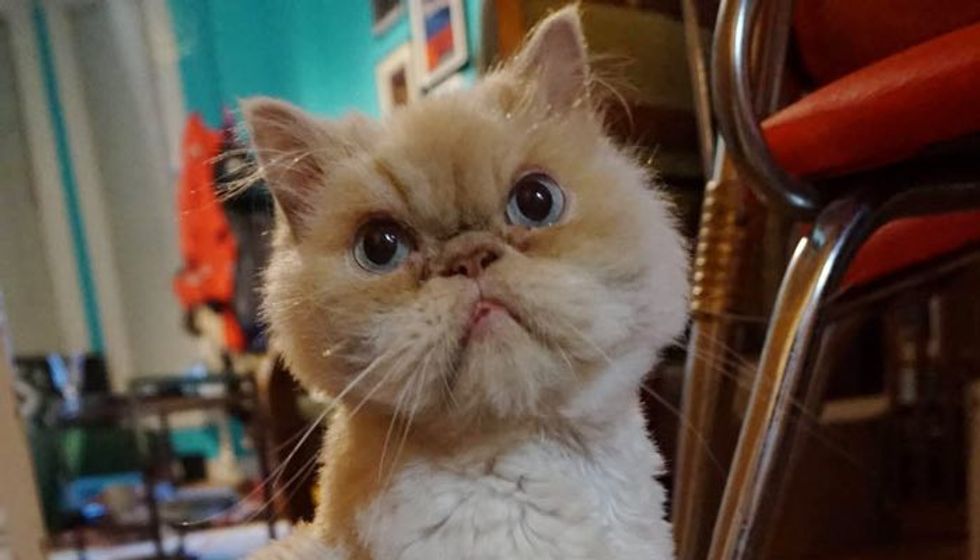 Gremlin is a 10 year old cat from Quebec. He has only two teeth and a lion cut from bad matting. His owner passed away and he was given up to other family members, they decided they didn't want to care for him and dropped him at a shelter.

When fosterer Gabriela Middlebrook met the shy cat at the shelter, she knew she had to take him home and help him feel loved again.

The difference a month at home can make!

Middlebrook shares the story with Love Meow: "I live in Toronto and recently got into fostering cats for a local rescue. Our last foster, Kya (Formerly Shortcake) was a sweet 2 year old spotted shorthair who dominated over our other cats. After she was adopted by friends of ours, we agreed to let our cats take a break from having fosters coming in and out of the house.

That quickly ended when I saw the intake picture of Gremlin. There was a call for fosters and I knew I had to bring him home. I coordinated with the rescue and asked for forgiveness from my partner as opposed to permission.

The first few weeks with Gremlin was like living with a ghost. A few times we'd see a flash of eyeball, but other than that it was like no new cats had entered the house. I assumed he was eating as his food would be gone in the morning.

I remember the first time I came home from work and saw him sitting on the couch. He saw me, froze, then bolted to his favourite hiding spot. Day by day he started to expand his domain. First it was under the table, then under and on the table, then the whole kitchen. Now it seems to be all over the house.

Just recently he began to sleep on the bed (about three months after getting him) which is a huge step forward for him. He's stopped flinching when we try and pet him and doesn't hiss anymore when being picked up. He'll follow you from room to room and meow at you for treats.

One day we got the news that the rescue was merging into two other rescues, and that if we wanted to, we could adopt Gremlin at no fee. I approached my partner with a list of pros and cons about adoption, but just ended up blubbering and begging him to let us keep Gremlin.

It's so wonderful to see him grow, change, and trust us more and more everyday. We call him 'Gramplin' sometimes because of his grumpy expression, but he's anything but the sweetest."

Share this story and consider adopting an older cat.