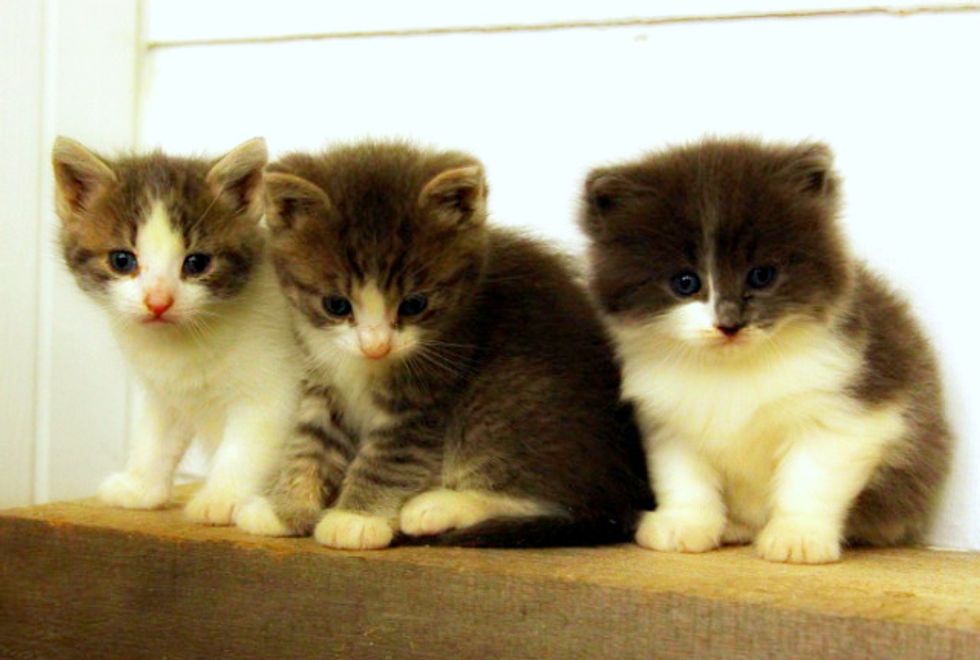 The neighborhood strays always gravitate to our place. We offer food, water and a barn which is “open 24/7” Although it's unheated, it does provide shelter during inclement weather as well as lots of nooks and crannies, which cats always appreciate.

Over the years, we have rescued a number of these felines, although some have proven to be completely “unrescuable.” One such feline appeared back in early April. She was pretty, grey and white, very dainty and young – probably under 1 year of age. We tried to make friends with her, and although she readily helped herself to the food and water we provided, she refused any contact and would bolt into the bushes whenever she saw us. She had very large, round golden-yellow eyes, and was quick, bright and agile, so I named her “Sparkle”. We had acquired a cage trap from a cat sanctuary that I support, and baited it daily, but met with no success: Sparkle remained “on the loose.”

It wasn't long before the inevitable happened: Sparkle came into heat and the male cat population subsequently increased accordingly.We tried to intervene, but the call of nature was stronger than the efforts of well-meaning, interfering humans, so she and the attending males disappeared from our property. When her heat was over, she returned; she didn't seem to be gaining any weight, nor was her behaviour different in any way. She even continued to “pal around” harmlessly with a couple of neighborhood males, which seemed to indicate she wasn't pregnant. Wrong.

One morning in late June, a surprise package arrived on the doorstep and it wasn't delivered by FedEx, but rather, by Sparkle, who presented herself with three tiny grey and white furballs! We brought the babies in and deposited them on our enclosed deck, which I may add, we had just finished renovating. One would think we had gone through the process just for the benefit of the rescued kittens! I should add that we tried to catch Sparkle, along with her brood, but she panicked as always at the site of the indoors, went ballistic, lashed out with her claws, and subsequently dashed off.

So there we were, new, adoptive parents. The babies were about four weeks of age, and much to our surprise, were completely weaned! Kudos to Sparkle: she hadn't abandoned her babies until they were able to eat on their own.

The kittens, two little boys we named “Bear” and “Sox” and their littler sister, “Squeaky” adapted to the new surroundings immediately, and have been little bundles of joy ever since. I named them accordingly: Bear is fluffy and chunky and trundles around like a little bear; Sox is appropriately named for his four white socks; Squeaky is just that, a little squeaker whenever she sees food.

It's now five weeks since the kittens arrived; they're growing rapidly, gaining weight and strength, and their increasingly hilarious antics reflect their growing curiosity and utter fearlessness at trying new things.

If it wasn't for the fact that I have three felines of my own, two of which are in the senior citizen category and starting to have health issues, I would seriously consider adopting all three kittens. I am hoping to be able to adopt one, but it depends on how my older girls react. We'll see...

In the meantime, our three little “lodgers” are up for adoption through the cat sanctuary I work with. Hopefully we'll find each kitten the perfect, forever home. Until then, I am prepared to continue offering my premises to Bear, Sox and little Squeaky: they all deserve the best and I know Sparkle entrusted us with them knowing we would give them just that.

On a closing note, we were finally able to trap Sparkle! And thankfully, the cat sanctuary found her a new home on a large country estate. She's doing very well there, and I'm so happy for her as she too, deserves the best.