A stray cat showed up in a neighborhood, looking for food scraps and a home. She wandered to someone's porch, begging for attention. 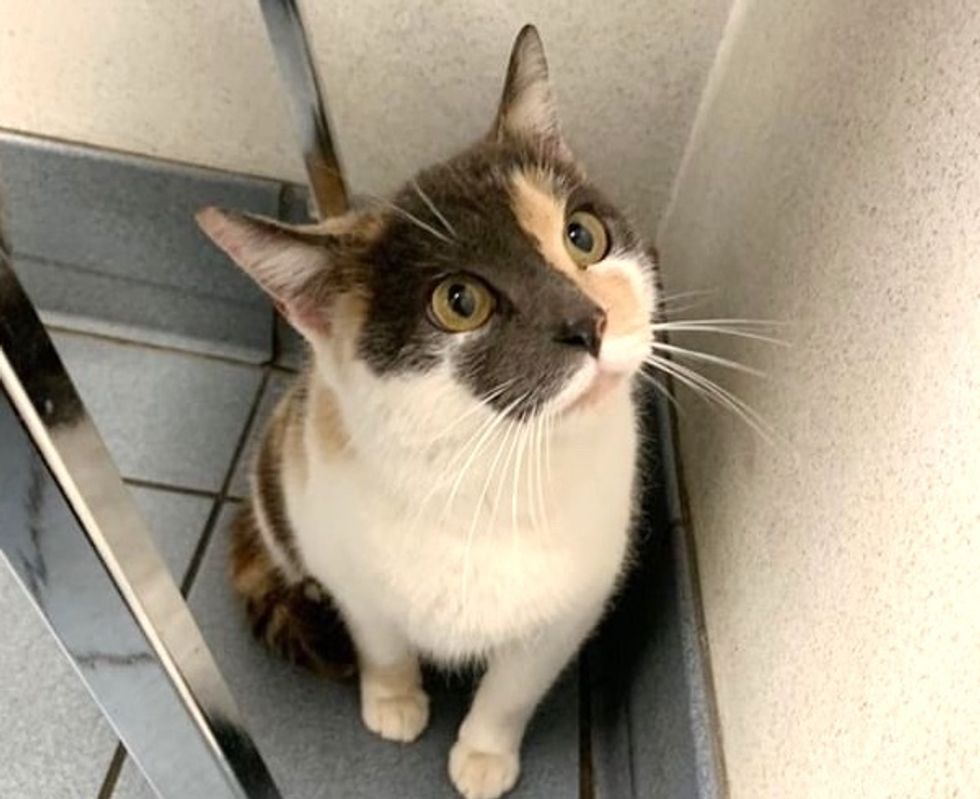 This friendly calico was found in Staten Island, New York when she sauntered up to a neighbor, trying to get her attention. The kind neighbor couldn't leave her out there fending for herself. She took her to the vet, where they discovered she was pregnant.

Knowing that the cat needed a safe place for her and her kittens, they sent out a plea looking for help. Athina Selena from Jersey Kitty Nonprofit (in New Jersey) responded right away and offered to take her in.

"She had previous owners that just let her out and didn't want her back. We brought her to the vet and found five healthy kittens after seeing an x-ray," Athina told Love Meow. 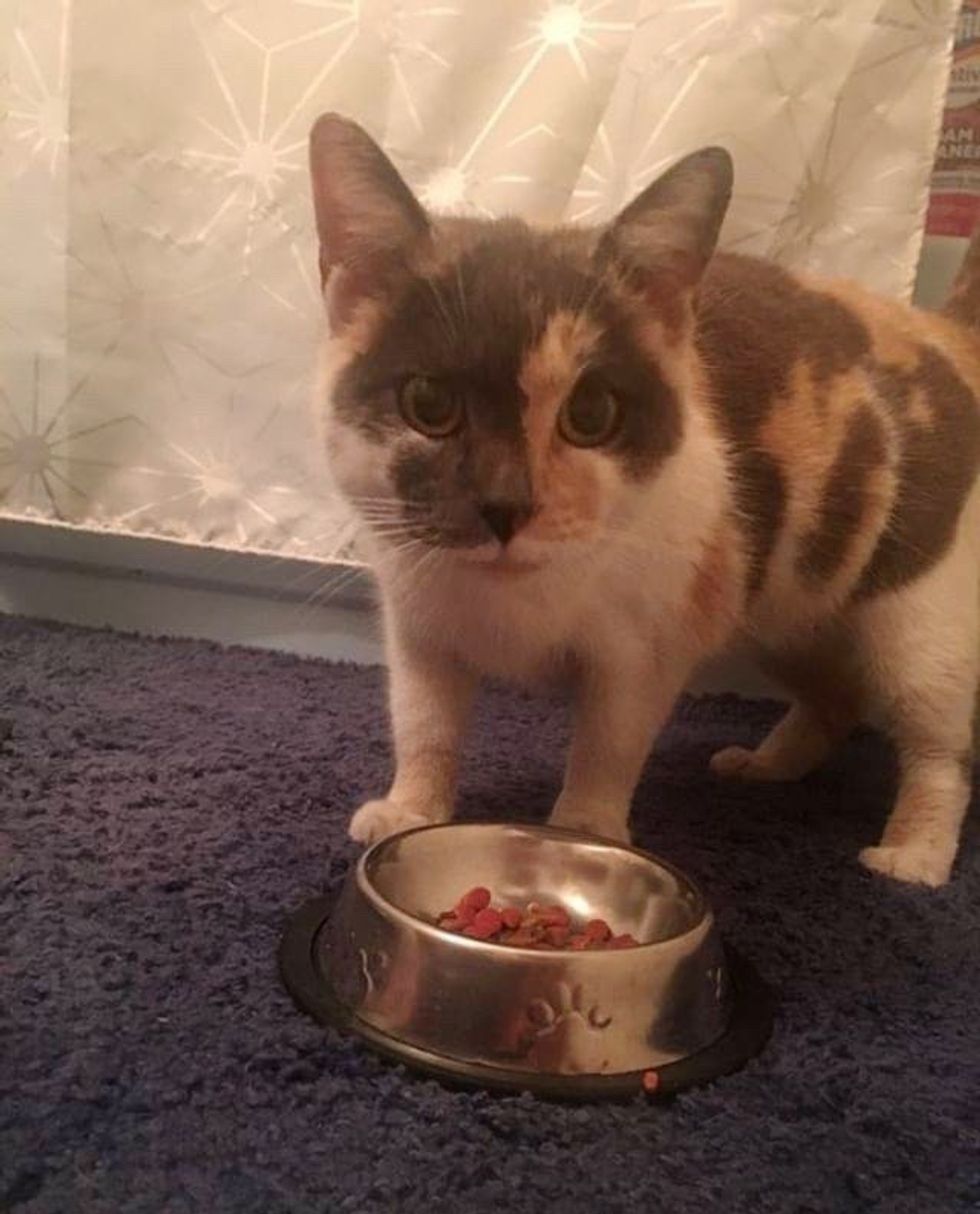 After a roller coaster ride caused by a false-positive FeLV (feline leukemia virus) test result, the cat mama Cannoli was finally medically clear and settled into her foster home, awaiting the birth of her babies.

One and a half weeks later, she went into labor and birthed four healthy kittens but needed assistance to deliver the last baby who was stuck and not in good shape.

The foster family got her out and brought her back from the brink. Mama Cannoli could finally breathe a sigh of relief when she had her fifth kitten snuggled in her arms. 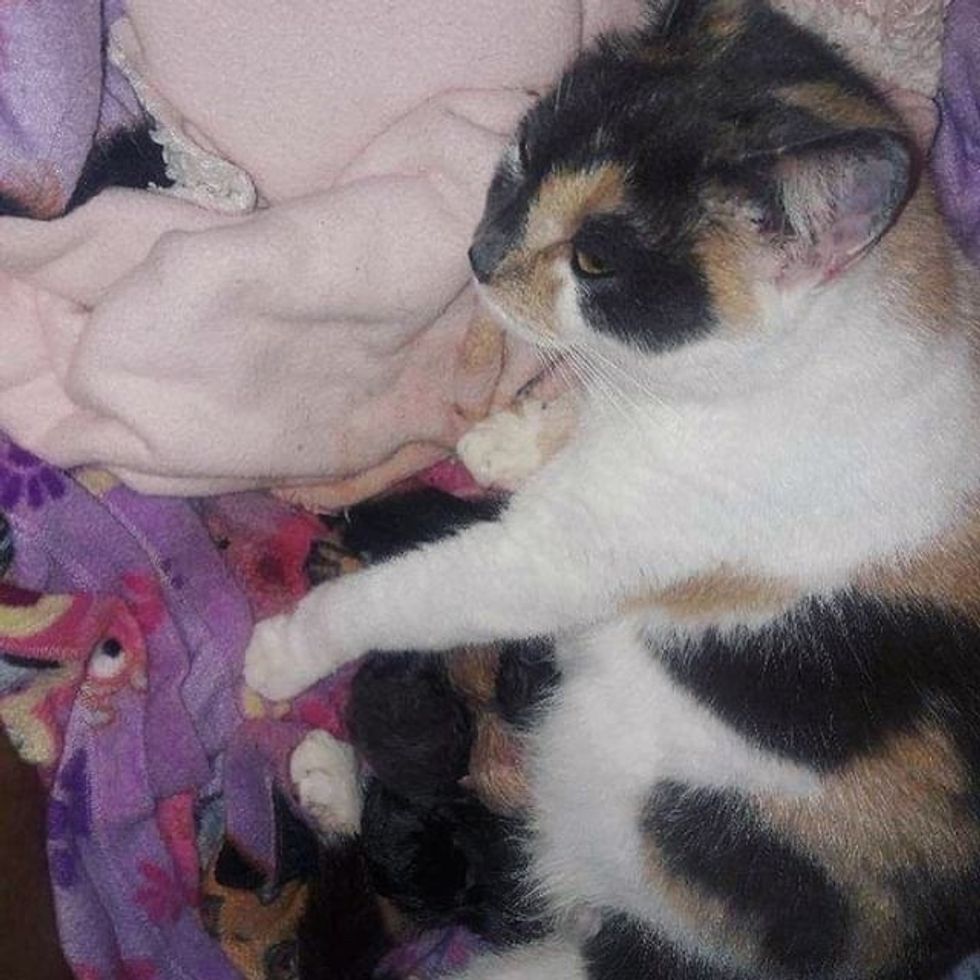 A few days later, Athina received a text message from another rescuer, Morgan, about an orphaned kitty who had just been born not too long ago.

"A single newborn kitten was found in the gardening section of Lowe's. It was rainy outside and cold. We needed to figure something out quickly so this baby would have the best chance at survival," Athina told Love Meow. 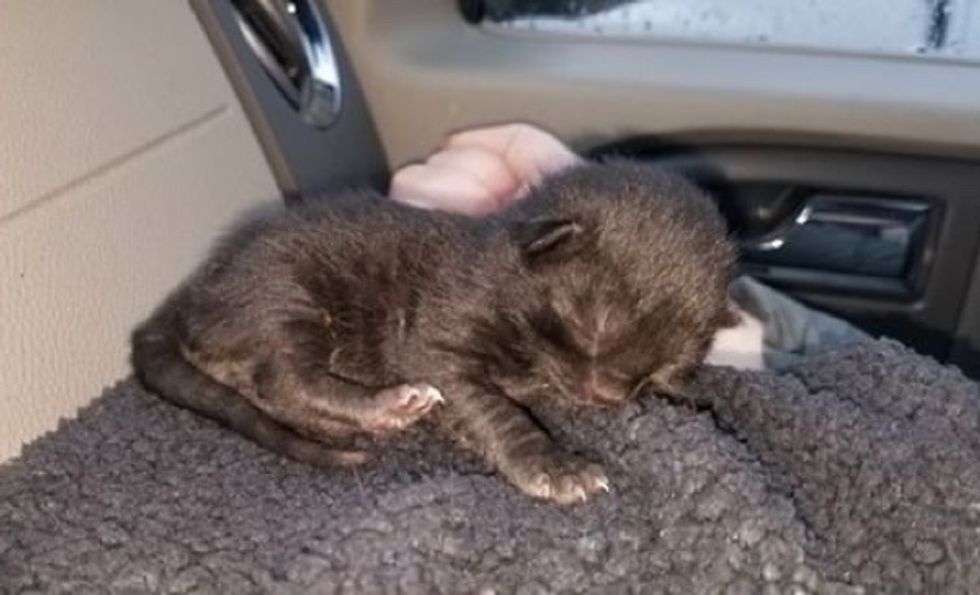 Instantly, they knew just the right surrogate mom for the tiny singleton. They decided to try introducing the new baby to Mama Cannoli and hoped she would accept him.

"Sure enough, without hesitation, Mama Cannoli began licking the baby as he started crawling towards her," Athina told Love Meow. 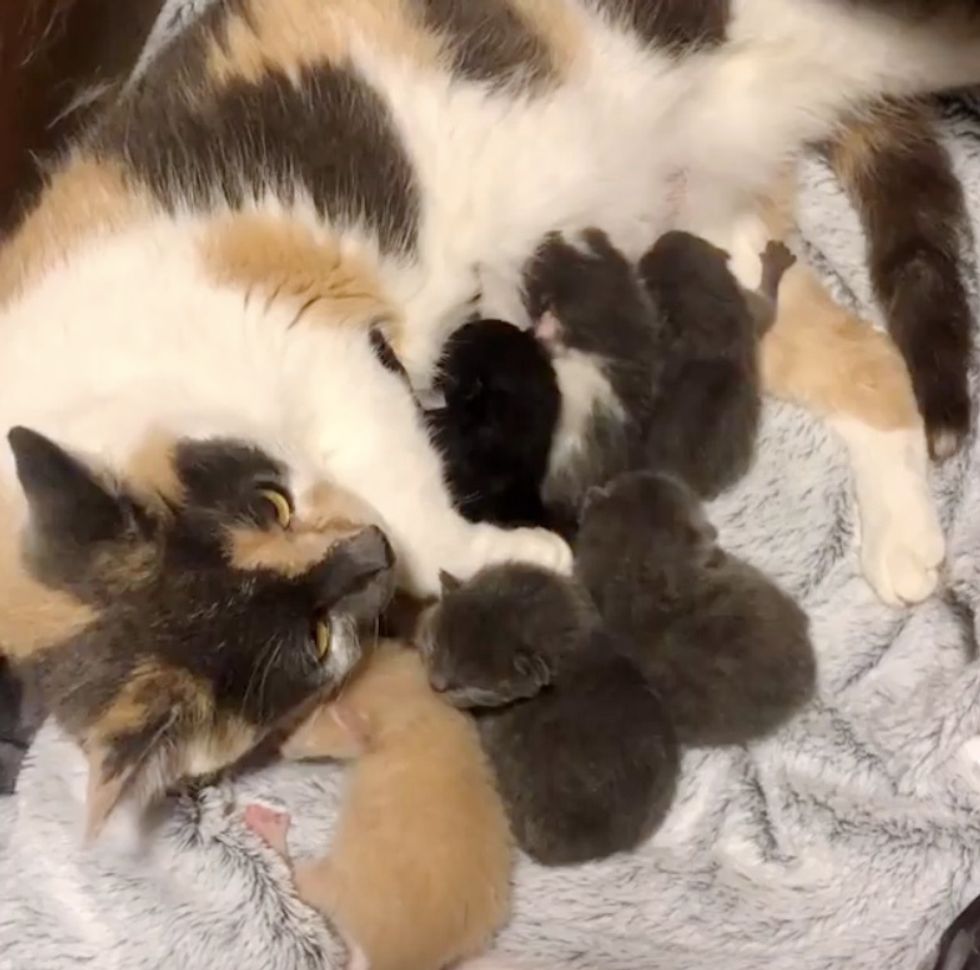 After getting a quick bath from his new mom, the kitten joined his new siblings and started nursing alongside them, in total bliss. Despite a rough start, the little kitten began to thrive once he was touched by a mother's love.

Stray cat gets help for her kittens and saves an orphaned kittyyoutu.be

Mama Cannoli is so loving and dedicated, looking after her kittens and her adopted boy. 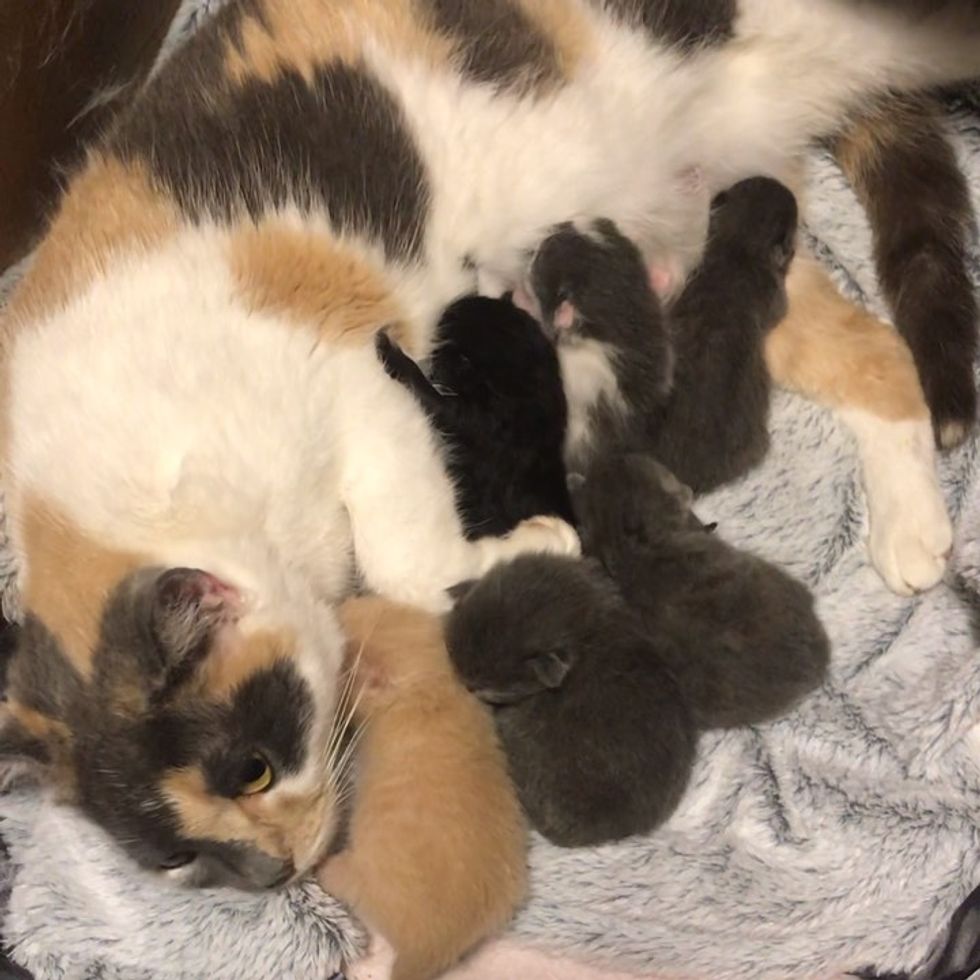 She found the right person to help her and her kittens. And she returned the favor by saving the little orphaned kitty who needed her.

"Everything happens for a reason," Athina said. 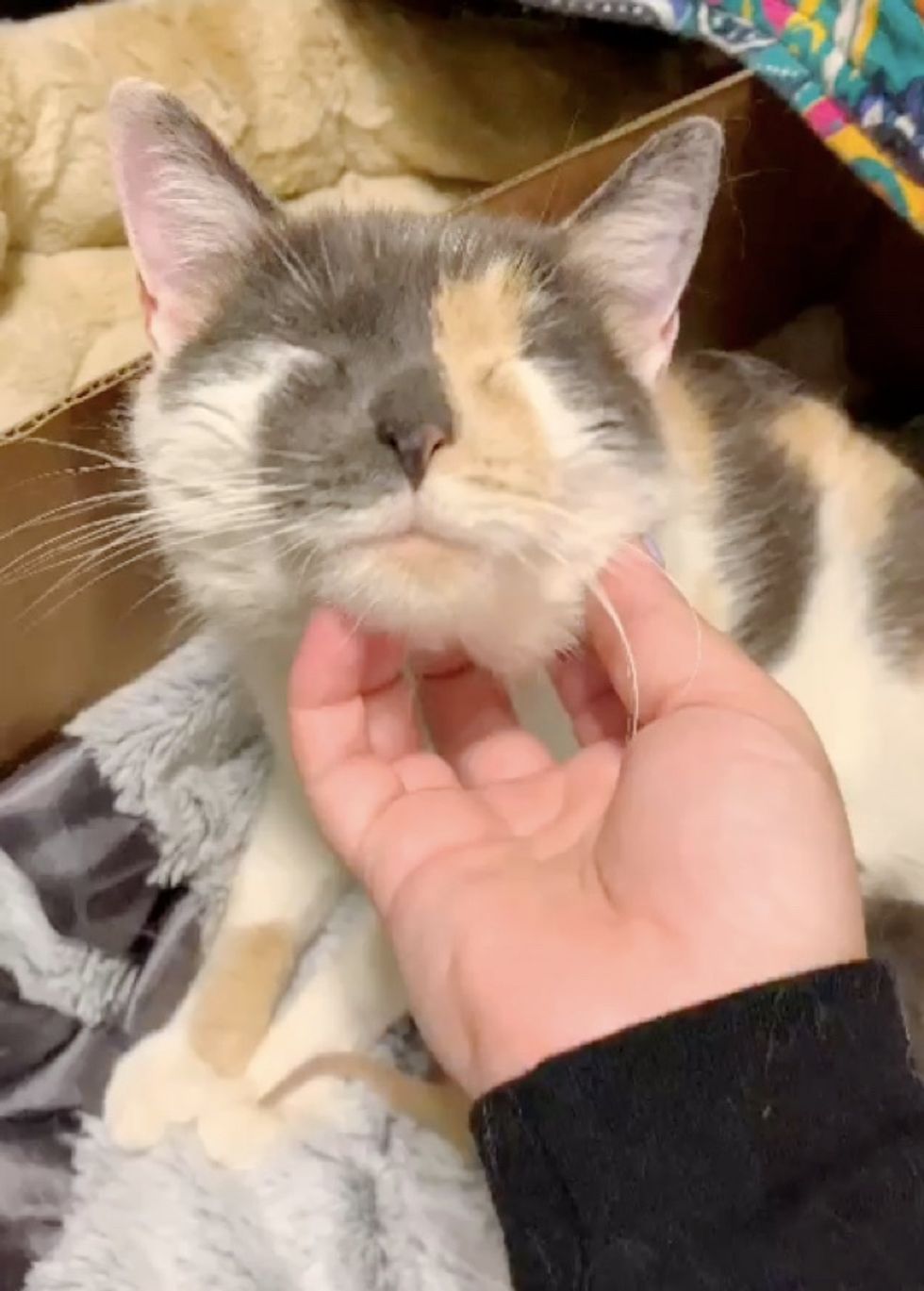