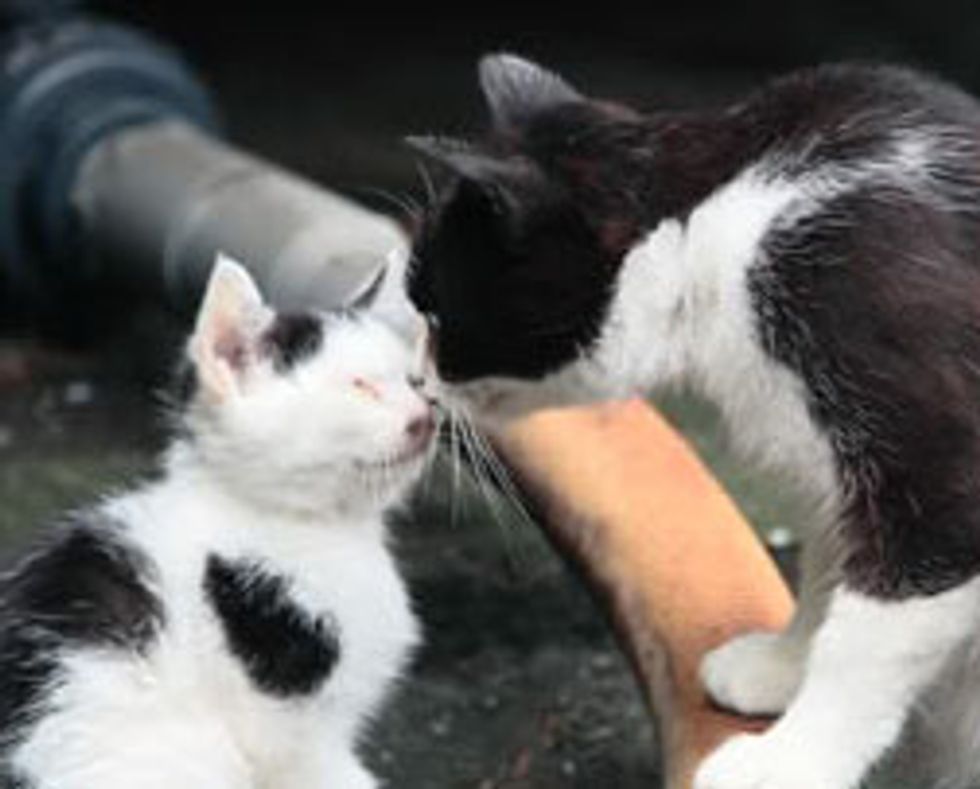 Cat Island Status After Japan was Hit by Tsunami

In the morning of March 22nd, ASDF helicopters landed on a remoteisland, Tashirojima, which air route, only way to access other places, was cut off after the earth quake. In Tashirojima, 80 % of the total population, 73 people, are older than 65 years. After about 1 week after the quake, emergency supplies started to arrive in the island. On 22nd, 800 kilo-litters of gasoline and kerosene, food for 100 meals were delivered along with satellite phones that will enable the residents to communicate with hospitals to ask help for acute sickness/injuries. SDF personnel says that relief teams are usually supposed to be able to reach all parts of affected area within acouple of days after disasters. Emergency materials finally started toget across affected areas. On Tashirojima island, younger residents of the island, although they are already in early 50s, carried and distributed the aid supplies with SDF. [Translated by JEARS. Original article]

Japan Earthquake Animal Rescue and Support stated the following on their Facebook page:

[update 3/14]: the cats and people are doing ok. Many shelters have started their relief effort in the hardest hit areas.

Sendai Television Inc. (http://joox.tv) reported a message on their bulletin board regarding contact from Tashirojima (Cat Island). On March 14 approximately 2pm local time, two tourists from Aoba-ku, Sendai were confirmed safe in one of the shelters on Cat Island. Though the post was later removed from the bulletin, we were able to retrieve it through Google caching (screenshot).

Most of people and cats are doing ok on the island, but they are very short of necessities such as food and water. A Self-Defense Force helicopter has landed on Tashirojima (cat island) and rescue effort is underway.

“Just to give everyone an update on Tashirojima, cat island. The people and cats are safe but short of food. A volunteer looked into transporting food by boat, but the is too much debris in the water. A helicopter is the only way. The army will probably get a helicopter ready soon so we are looking into the possibility of asking them to take cat food too,” stated by Japan Earthquake Animal Rescue and Support.

[update 3/13]: Nownews.com received a lead from a Tokyo resident who said his parents are located in Tashirojima. According to him, the ground moved approximately 30cm downward, but his parents are fine. He believes the cats should be ok. Though the information is still ambiguous, it has given many cat lovers a glimpse of hope.

We also recieved info regarding a neighboring island, Ajishima (網地島). A photo that seems to be taken after tsunami, emerged on twitpic. According to the caption, it was taken around 15:43 local time on March 11.

A local website, tv-asahi resported that 80 residents were found on Ajishima and the rescue efforts are ongoing.

Cat Island is famous for its penchant for cats. The island is covered with cats who are highly respected and revered. When the fishermen come back with fish, they always feed the cats first. All the cats there are sociable and friendly. They are well fed  and loved by every islander and tourists from all over Japan. Most of the residents are elderly people since the younger generations prefer a more urbanized lifestyle. The elderly have worried about the future of their cats if there will be enough people to take care of them after they pass.

We are sending our prayers to the people and furry creatures on Cat Island.

We will keep you all posted.

Here are updates on other kitty friends from Japan.