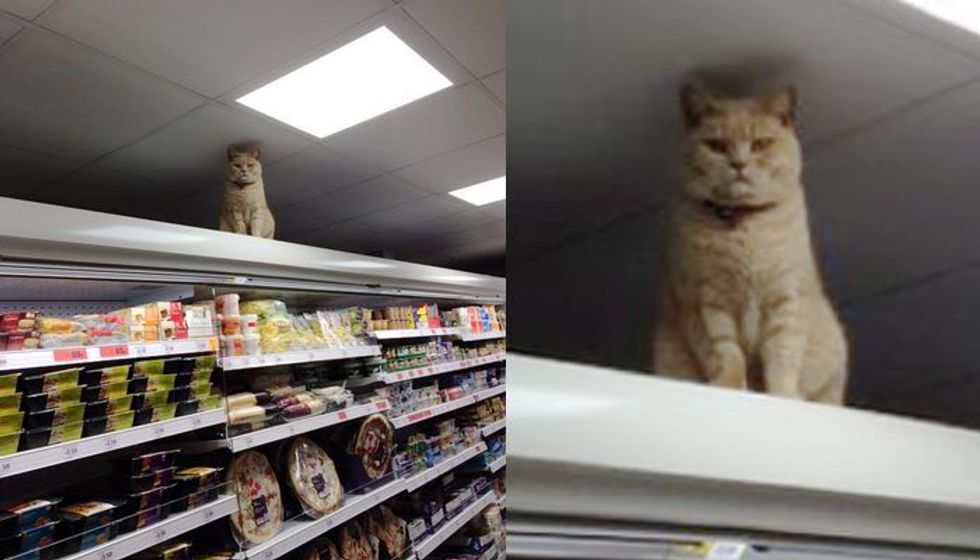 A cat has made a supermarket his home and refuses to leave even though the staff tries to remove him. He just keeps sauntering back in.

This ginger cat from England has been dubbed the store's resident cat and has been spotted by shoppers prowling around the store and sitting on a shelf supervising the operation inside the supermarket.

Adam Oliver, a resident who lives near by, has come forward to say that the cat's name is Olly and he belongs to him. Olly has been regularly appearing in the Sansbury’s supermarket since last November.

"(He) lives close to shop, 6 years old, had him since he was 6 weeks old, name is Olly Oliver and he has a blue brother," Adam said via twitter.

The kitty comes in, gets removed by security and walks right back in. He seems to be perfectly content with the routine being a habitual feline that he is.

A local resident shared her story on I Love SE4: "I saw this gorgeous cat tonight at Sainsbury and my daughter said that the security is keeping an eye on him ... Maybe the security was on a break."

Sometimes he may disappear for a while, but only returns with more confidence and fluff. Local residents have been referring to him as the "star of Brockley".

Olly is a very friendly feline and gets a lot of love from the shoppers.

Cat just chilling in Brockley Sainsbury's. Security tried to remove him. He sauntered straight back in. pic.twitter.com/MotEBFuzKr

The cat has come back to Brockley Sainsbury's. pic.twitter.com/2AKRosiEGM

What a cool cat! Share this story with your friends!