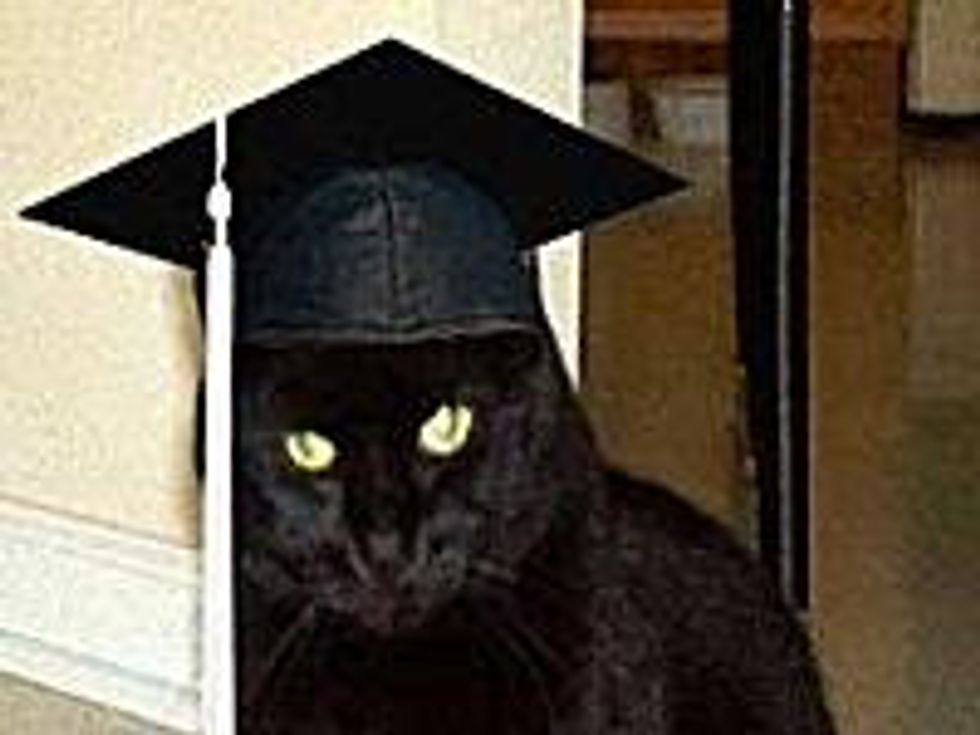 Cats Earned a Diploma or Became a Licensed Professional

Several kitties have earned a diploma through online institutions or been certified as a licensed professional. Maybe we should rethink the intelligence of cats.

What these cats have in common is that their owners investigated a number of diploma mills. By the time they graduated, their true identity and the diploma or certification were publicly shared all over the news media.

Let's introduce our cats of academia:

Colby is a beloved cat that belongs to a deputy attorney general. He was given an MBA degree in 2004 by Trinity Southern University based in Dallas Taxes. Colby was 6 years old at the time. In his application form for a bachelor's degree in business administration ($299), he claimed to have earned credit from a community college, experience working at a fast-food restaurant, as a babysitter and a paper boy. Upon the information provided by Colby, the school notified him that he was eligible for an executive MBA program for another $100. Colby then sent in his transcript which was printed with an average GPA of 3.5.

I covered this story earlier this year. Oreo is a tuxedo cat who signed up for a high school diploma program provided by the Jefferson High School Online. With a payment of $200, Oreo only needed to complete a test to find out her qualifications for the diploma. Throughout the test, Oreo was scoring all As and earning credits from an essay she wrote about her life experience  prior to being adopted by the Collins family. Oreo's human father admitted that he did answer all the questions and wrote the essay on behalf of his cat, but there is no doubt that Oreo was with him on his lap throughout the entire process. If they got an answer wrong, the test provided a hint which basically told them what the correct answer was.

It was dated back to December 11, 1967. Oliver Greenhalph was admitted to the English Association of Estate Agents and Valuers for a fellowship program after paying 11 guineas (English obsolete coins). Her human father Michael Greenhalgh was a cameraman with Television Wales and the West who was investigating bogus professional organizations at the time.

Henritta's father Ben Goldacre, a science journalist from the United Kingdom, obtained a diploma in nutrition from the American ASsociation of Nutritional Consultants for his departed cat.

It is so easy to be certified as a hypnotherapist in UK and US that even a cat can do it. George is a ginger white cat who belongs to Chris Jackson, a presenter of Inside Out in the North EAst and Cumbria. Jackson registered George with three industry bodies and all successfully certified his cat based on forged credentials from a bogus source. George easily became a licensed professional hypnotherapist in UK.

A real estate appraiser named Roy Schaeffer from Rhode Island registered his cat Tobias at the National Assn. of Real Estate Appraisers for a certification as a licensed real estate appraiser. Despite the fraudulent information and credentials he made up for his cat, Tobias was nonetheless certified.

Kitty O'Malley also named Spanky received a high school diploma from Washington High Academy in 1973. Though the diploma could not get Kitty into any local colleges, the institution was put under investigation by the state attorney general's office.