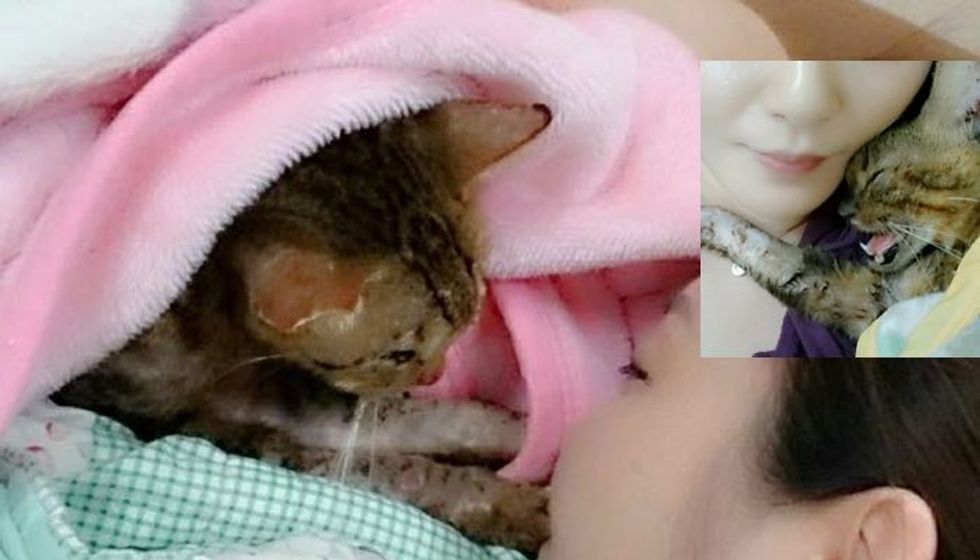 A couple refused to give up on a stray cat that suffered from a car accident while everyone else decided to ignore. With love and dedication, the kitty is recovering and hitting all the milestones.

Michi Sun shares the story with Love Meow: "It brings tears to my eyes as I see this little guy improves everyday when the rescuers update his status.

This cat was struck by a car. He managed to get out of the busy street and coped with his severe injuries for few days. There were people who saw him, without offering help because they probably thought he's not going to make it anyway."

Finally someone called to get help. "This beautiful lady Cleo Lee and her husband who is a vet, came to this cat's rescue. This is one of their many after-hour rescues," Michi added.

"An emergency surgery was performed. They named him 'Baby' and tried everything possible to save him. Baby's injuries were so bad, he had trouble eating food by himself. There were many voices criticizing this couple for not putting Baby down, because they believe he probably would not survive anyway. Why not just let him go?"

"Miracles do happen. Baby's condition has improved so much. The couple never give up on him. In fact, Cleo spends much time out of her busy schedule to be with Baby, to let him know he's safe and he's loved there. Baby responds too. He would cuddle up with Cleo and sleep for a while or listen to music with her. Baby purrs and hugs the little toys Cleo gave him just like, a baby."

It's amazing how much better Baby looks now and he continues improving every day.

No one believed that Baby would survive, but Cleo and her husband saw that fighting spirit in him. Now Baby is smiling with his new family and is loving his new life.

13-year-old Cat is So Thankful to Be Free from Mountain of Knotted Fur He Can't Stop Cuddling...