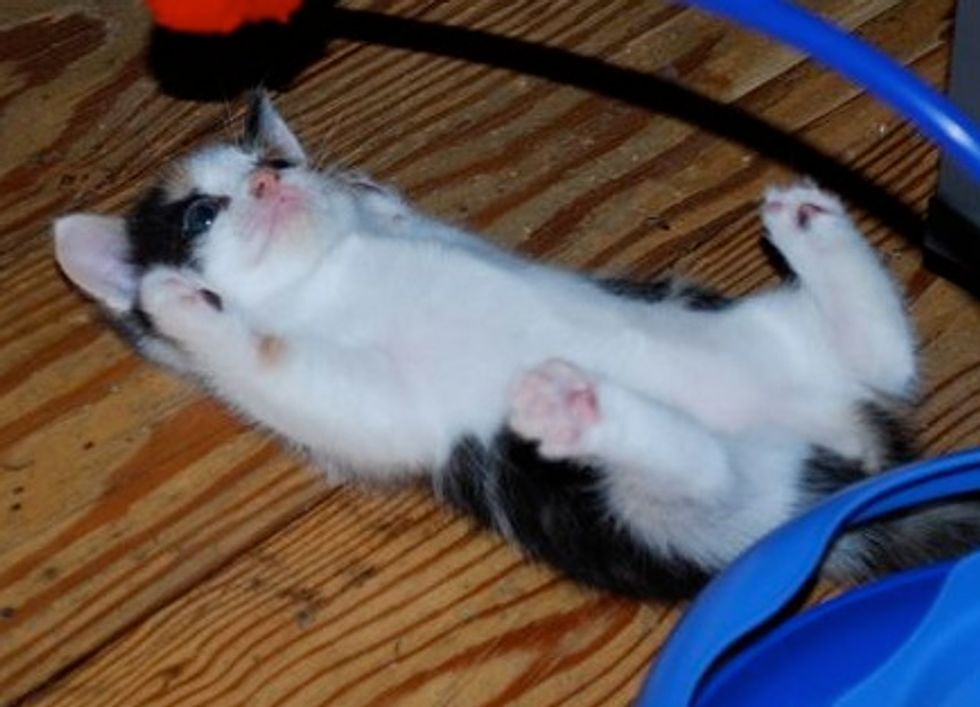 Foster Story of a Cat Mama and 5 Fuzzballs

Isabelle has rescued and taken in many animals with special needs. "That's the kind of adoptions I go for, challenging, sick, old, injured pets." She also fosters animals that are in need of a good home.

Farrah came to Isabelle's home as an emergency foster because she was a rescued pregnant cat mama who appeared to be quite young. Isabelle and her friend educated themselves for many days, looking into tons of cat pregnancy information and tips prior to Farrah's arrival. "This is going to be Farrah's one and only litter," said Isabelle on her blog (Twinkie Tiny Dog).

"Farrah's arrival was a shocker. We have no idea when the kittens are due since we don't know how long Farrah has been pregnant. We are going to do right by her and love and nurture her for now. We are both excited and a tad nervous," Isabelle wrote on her blog.

12 days later, Farrah gave birth to five precious little fuzzballs. "We are too excited, moved, elated.. no words, really. They are all beautiful, healthy and strong. The ex pregnant cat, Farrah, seems absolutely relieved. She's in great health and won't stop purring and taking care of her cute kittens," said Isabelle on the day the kittens were born.

"Having newborn kittens is disorienting. It's exhilarating, entertaining, a lot of work, and it makes one goofy and giddy."

11 days after the kittens were born, they were getting quite mobile. "They're staying in the basket though, so their mom has it easy still. Their eyes are opening at different rates and they are holding their heads up a bit better. They are quiet until my big hand reaches for them, but they're getting used to that too," said Isabelle on the 11th day.

Around two weeks, the kittens started playing with each other. As they were forming their personalities, it became easy for Isabelle to name them. The two Calico kittens were named Puddles and Pebbles . Charlie is the Tuxedo. Sandra the pointed kitten. Teddy Smudge is "a dilute calico kitten and a pointed kitten." :)

As the kittens got bigger, their ears started to unfold. "Adorable scrunched up ears can't wait to stand up and be pointy. They're safe, sound, and well fed, if we ignore the fact that their mom is determined to hide them. They get moved around at least once a day, but they don't seem to mind that one bit. The only complaining happens when our superb mom cat leaves one or two behind," Isabelle updated on her blog.

As the kitten development progressed, Isabelle made sure that all the kittens are well socialized, so they can "have the best adult cat life possible." When the kittens were three weeks old, they started practicing their walking whenever they got a chance. Between the ages of 3 - 4 weeks they were introduced to 'real food' and litter boxes, and it was time they started to wander away from the nest.

"The nursery has been transformed into kitten play-land. All five kittens are running, jumping, landing on their faces on the floor, the food, the kitty litter."

Today the kittens are four months old and getting ready to find their wonderful forever homes. Though it has been hard work for Isabelle to look after these babies and their mother, she loves and cherishes every moment of it.

Photos courtesy of ©Isabelle. Check out her Twinkie Tiny Dog Blogand the Twinkie Tiny Dog Youtube Channel. You can see more stories about the kittens and the cat mama here. Isabelle is also hosting a pet photo contest on her blog. Click here to check it out :).

How To Tell Difference Between Calico, Tortie, Torbie, Tabby Cats and Kittens