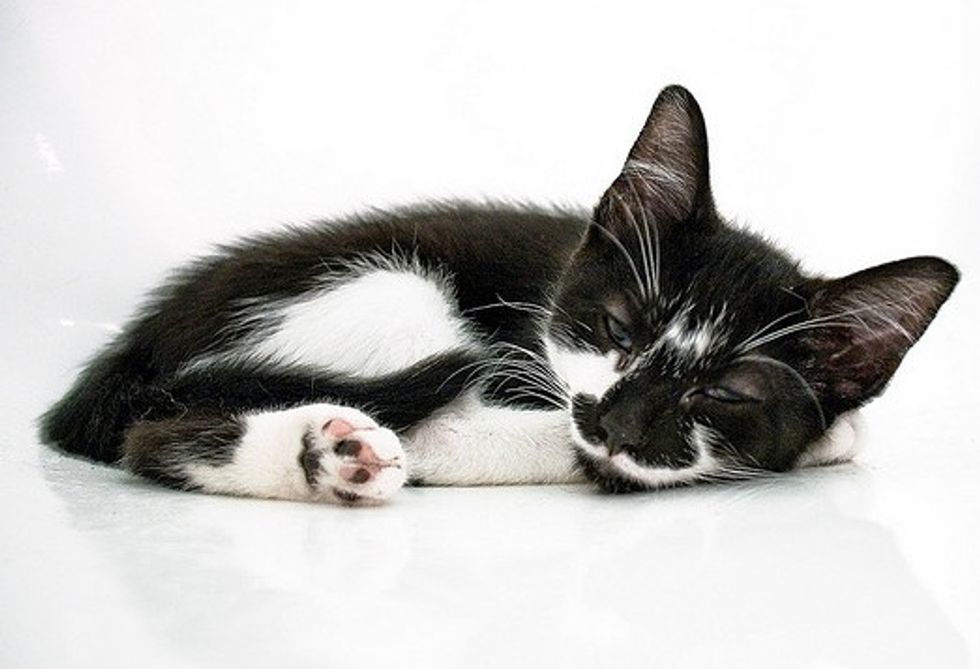 After we found homes for Mina's first litter of foster kittens (Mina's story), she was so sad. It didn't seem fair that she couldn't have a friend, so when we heard about a boy kitten that needed a home we thought maybe we would take him. Fritz was so shy he hid from us when we tried to meet him. His foster mom had to coax him out from under the couch with a toy, but when we tried to pet him he ran away. He lived with another older kitten and they got along great, so we figured even if he was shy around us, he'd be friends with Mina.

Fritz got his name because of his thick white mustache. It makes him look more distinguished than he is. The first night he lived with us, Fritz was so timid and scared! Mina was very sweet to him, and in no time he was running around like he owned the place. Even now when strangers (to him) come over, he turns into a big baby and hides. But once he gets to know a new friend he is bossy about getting attention and insists on playing fetch.

Mina taught Fritz to be a fostercat and he goes crazy for kittens. We never have to worry about misplacing tiny kittens because Fritz follows them everywhere making little chirping noises. He will even stop them from doing things he knows we don't want them to do, like chewing on electric cords (Ironically, because Fritz himself chewed off the corner of our kitchen cupboard). Sometimes he likes to bop them on the head like kitten whack-a-mole, but he is careful to be gentle. He helps other timid kittens come out of their shell -- tempting them with his tail -- I've even seen him pretend he doesn't notice a little kitten about to pounce him.

Our current foster kitten, Midnight, adores Fritz. She is always right behind him, and she copies everything he does. The other day Fritz taught her how to use the scratching post.

Fritz is the one of my cats who loves to have his photo taken. He parks himself in front of the camera and hams it up. My other cats will only put up with me for a few moments, but Fritz will let me shoot all day.