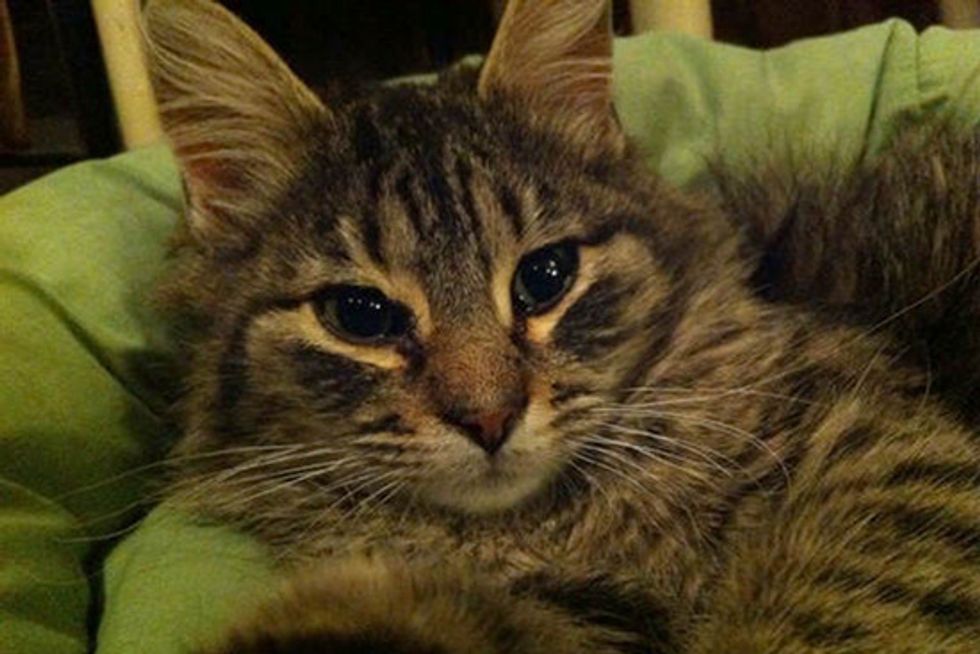 Gracie The Stray Cat Clings To Her Rescuer Like Family

A stray cat came into a person's life on a cold winter day. When she found her human, she clung to him like family.

"Gracie came into my life on a cold November evening, 2013.

On my way home at 2am from an agriculture event after a long 2 hour drive I made a stop for gas at a gas station on Hiway 21, near Looma, Alberta. It was a cold night. After paying for gas and chatting with the store clerk for a while, I headed out to continue on my way, when I noticed a dark furry lump on my tire. ...as I got close the mass moved and it revealed itself as a young cat.

At that very moment I picked her up, she clinged to me tight, and rode that way the remaining 10 minutes of the drive. I brought her in the house with me, she was shivering, she was sick, she was in need of help bad.

I have never owned a cat before, but I raise chickens and feed the local neighbour hood cats that frequent my coops to catch mice.

That night I was unsure if she would survive, but she spent the night cuddled up beside me. I didn't sleep much.

The next day I took her to the vet, my first time ever going to a vet. I was told she was about 5 months old and only 4lbs, underweight and in need of treatment and she should be spayed later on.

Being a student I had a small minimal budget, I had no idea how I could pay for this all. I told them that I couldn't afford the bill, told them that I would like to see her find a good home.

It was right then that Gracie suddenly jumped up on my shoulder and dug her claws in and started purring..... she wouldn't let go I began to pet her and she started to fall asleep.

I was taken back I had never connected with a cat before, heck I was even allergic. The vet and assistant left the room and mentioned they would be right back.

10 minutes later I had a sleeping cat in my arms, the vet and two staff members came in the room and said they decided to waive the fees, and sent us home with a warm feeling in our hearts and the chance to become bonded. They gave me a cat bed and a cat carrier, and treated her for free, I couldn't believe it.

They asked that in return I consider giving her a chance to at least recover before rehoming her.

I posted Cat-Found posters and got a call from an employee who saw someone dropping off two dogs and a kitten out behind the Esso gas station that same day. Found out the RCMP came out and picked up the dogs, but they couldn't find the scared grey kitten.

Gracie then spent a few weeks recovering, that was back in November. Gracie, is now a member of the family so to say.

Gracie, first night of her rescue.

Her very own comfy bed.

All healthy now. "She has started the 'What can I fit into?' Phase."

She often tries to sneak in the fridge.

Gracie is now the manager of the house. "Hey, where is my food?"

"Love this cat, she has brought much joy and happiness to my life," said Jonny.

Photos courtesy of Jonny Anvil via imgur. Thank you for saving Gracie!