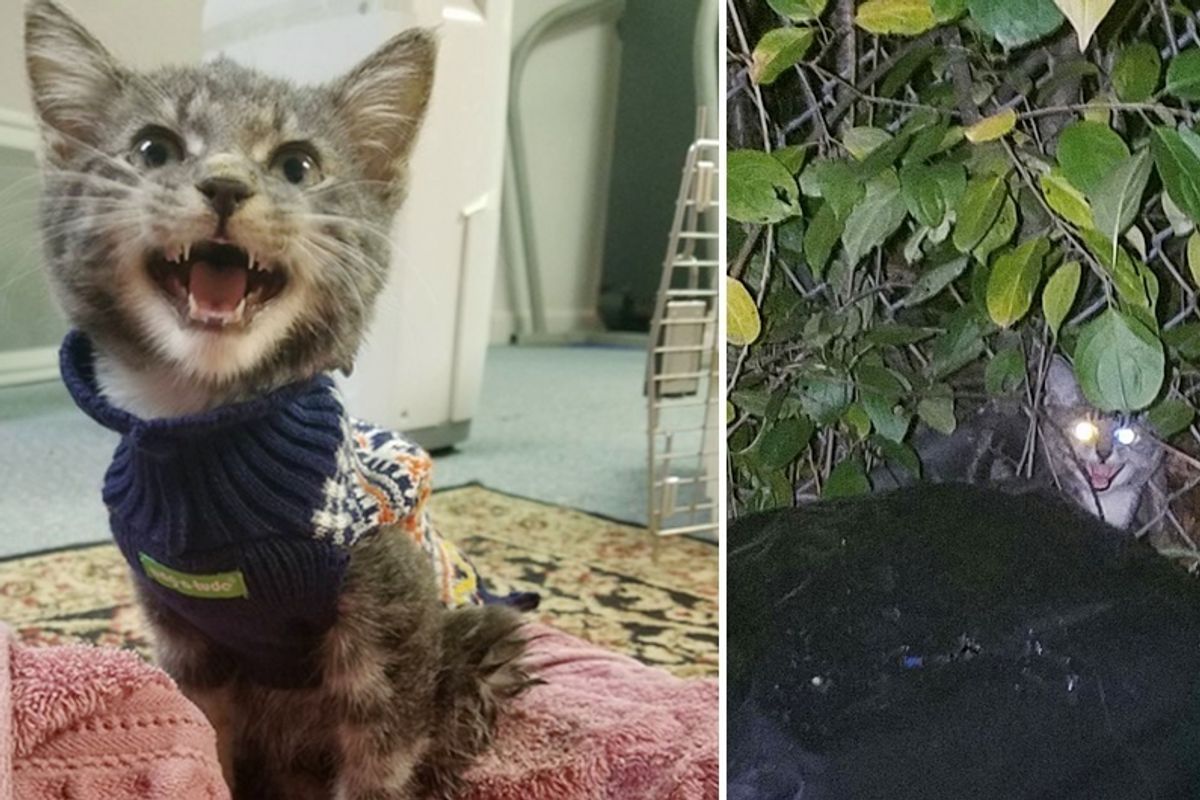 Kitten Found Hobbling on Street Meowing for Help - They Knew They Had to Save Him..

A little kitten was spotted crawling across a busy street one night. He was weak with a terrible limp, but his will to live was so strong that he let out the loudest cry for help.

A little stray kitten was found hobbling slowly across a busy street. When Kevi saw the little feline appear right in front of their car, they were shocked and immediately came to a stop.


"There was no way he would have made it during the day when that street is most busy," Kevi told Love Meow.

As soon as the kitten spotted the person, he darted into the bushes to hide. "When we found him. He let out the most heartbreaking cry, as if to say 'please don't hurt me, I'm injured'."

After an hour of trying to convince the kitty to come out of the bushes, he bolted for the busy street. Kevi quickly threw a coat over him in an attempt to calm him down.

That's when they realized that the kitten was just skin and bones. He was covered in fleas and injured (what appeared to be a broken pelvis). The little one barely weighed anything and was terrified.

Kevi took him to Tree House Humane Society, a rescue group in Chicago, so the little buddy could get a second chance at life. That day, his fate changed forever!

"We named the kitten Dudley (after Dudley Do Right) because he walked like he just got off a horse," Kevi told Love Meow. After five baths, the little kitty was finally clean and flea free!

"A broken pelvis doesn't stop this happy guy from dancing."

Six weeks after Dudley moved into his foster home, he put on weight, started to play and learned that life could be joyous. But the little guy continued to limp and walk with only three legs. They knew it was more than just a broken pelvis....


"After taking him to the vet, x-rays showed he had a broken pelvis and femoral head (on his right back leg)," Kevi told Love Meow.

"His back legs are very weak so he likes to lean on things. He also falls over all the time, but he's getting stronger every day."Courtesy: Kevi @feralcatsofchicago

The kitty needed an FHO (Femoral Head Ostectomy) surgery in order to heal fully and be pain free. They were able to raise enough funds and get him the surgery he needed in order to live a quality life.

Dudley was such a champ throughout the entire journey. After the surgery, he took his meds, finished every meal, did physical therapy and was always in good spirits.

The thankful little kitty loves cuddling with his foster mom.

"Post op day two and he's already walking on it."

"He's supposed to walk for at least three minutes four times a day, but Dudley insists he can run and jump now."

Dudley has come a long way. He was a terrified little kitty when Kevi first found him, but now he demands love and attention from his human friends.

The sweet kitty is waiting for a forever loving home for him and his cuddly buddy Mr. Horse :).

Dudley is scared no more! He loves attention and tells his human loudly what he wants!

When he came to his foster home, he could barely sit up. Look at him now!