This ginger kitten was half the size for his age when he was rescued, but his determination to live and grow amazed everyone around him. 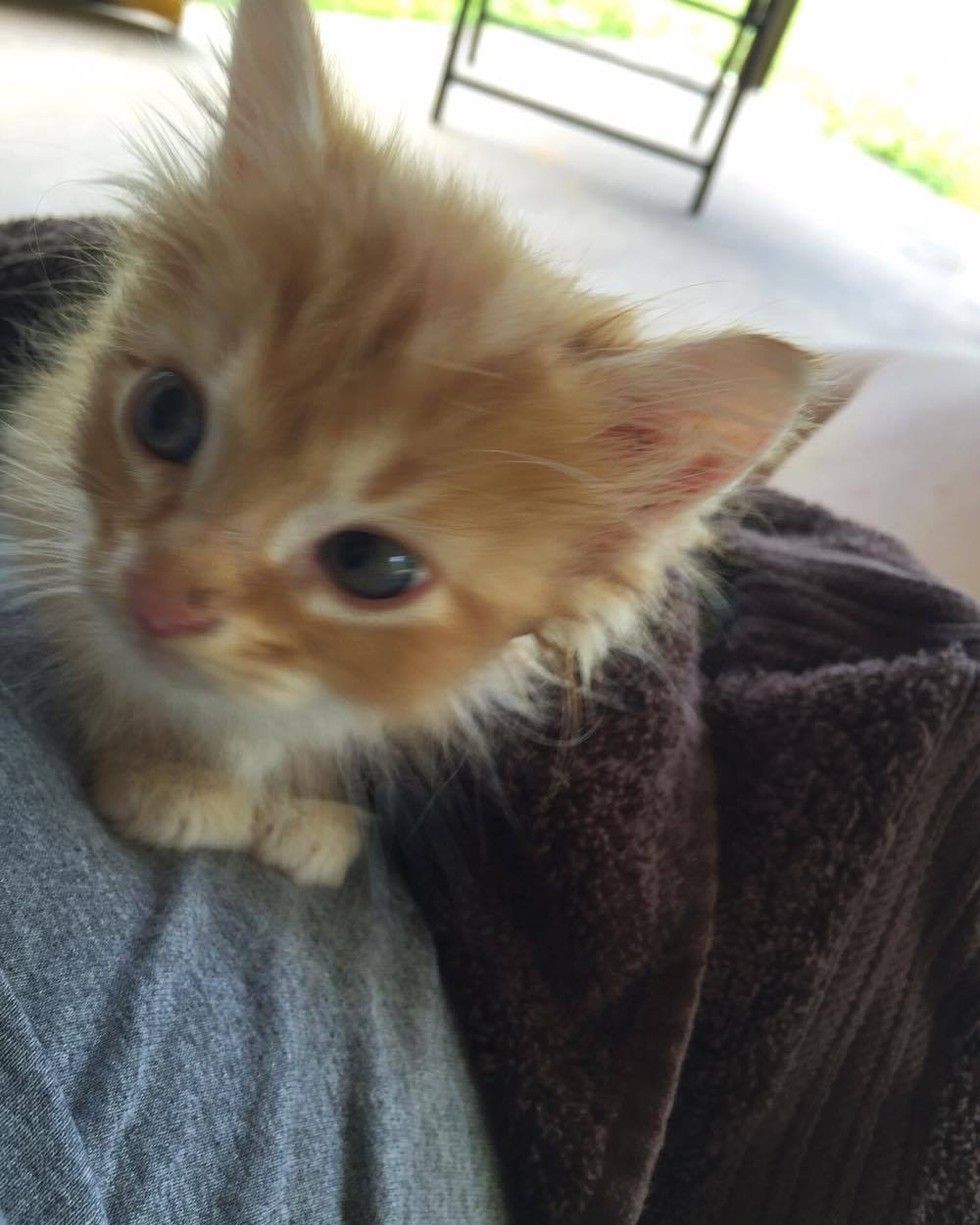 The kitten was skin and bones and starving when they got him. He immediately tried to get into a bag of sandwiches despite being in poor shape. It was his fight for survival.

"We called him our 'garbage baby' because we assumed he was surviving on whatever scraps he could find," Cheyna Miller told Love Meow.

Pekoe was 7 weeks old, weighing in at a mere 9 Ozs, where a kitten that age should weigh around 1-2 Lbs. Whenever he smelled food, he cried for it. "He would pop up out of no where" and started meowing for some snack.

The ginger kitten was taken away from his mom too early and was malnourished as a baby. It stunted his growth but the little guy was determined to get bigger and stronger.

Waiting patiently in his basket at the vet. 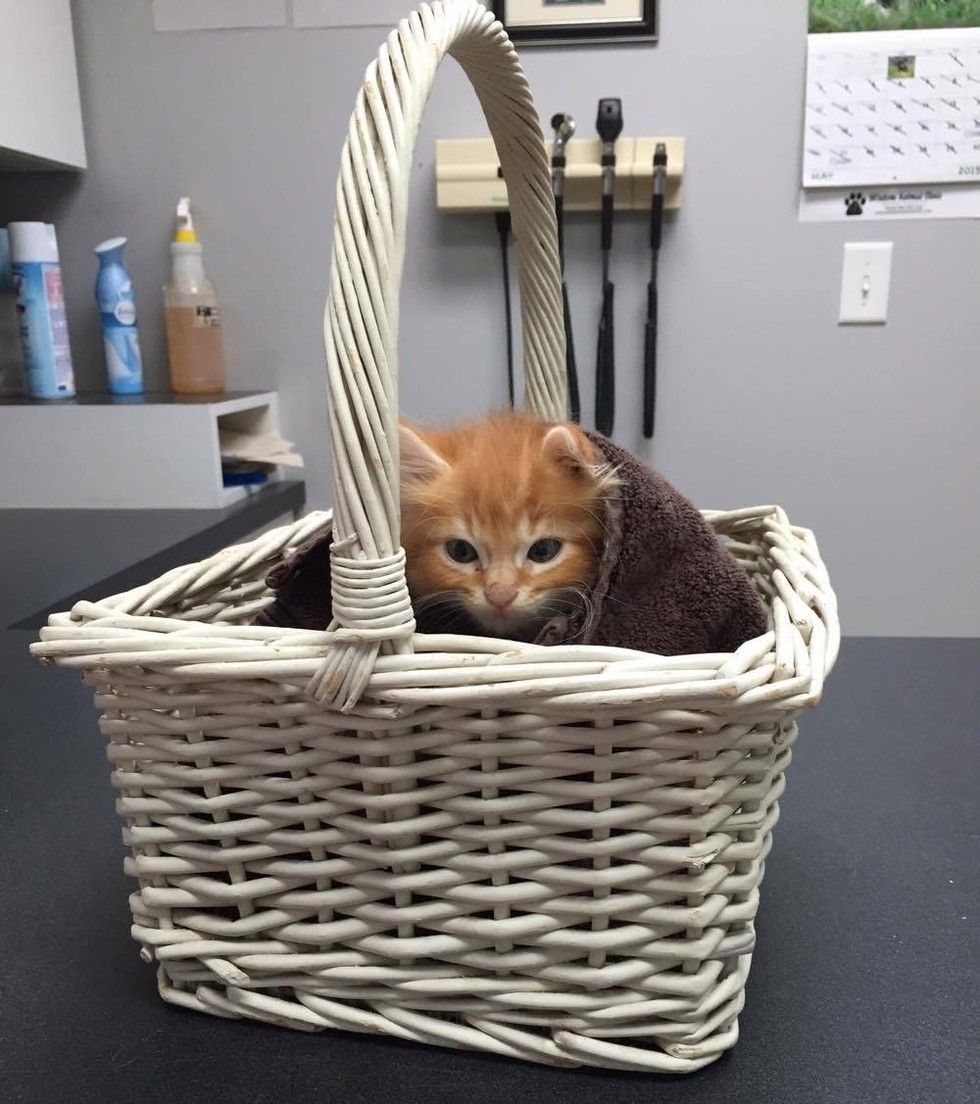 "I knew he'd be ok when he began to play with my other kitty babies. He perked up and got right to it," Cheyna said.

He had to have fluids for the first week and some meds, and he was a champ. "The girls at the vet and I fell in love with him and I knew that he'd be ok."

Pekoe was never picky about food and didn't waste a tiny bit. 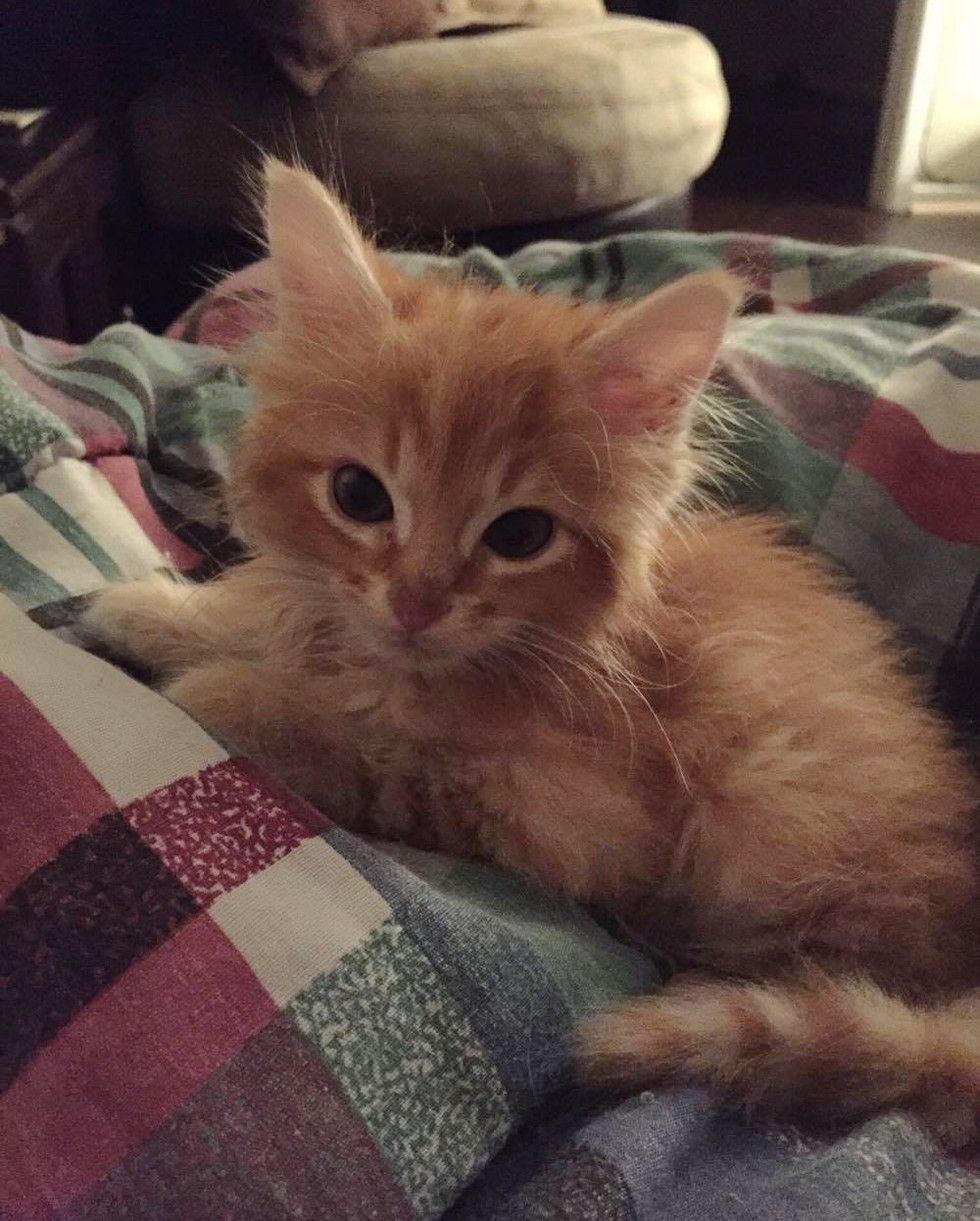 Today, Pekoe weighs at 5 Lbs! He is a petite little guy, but absolutely perfect. What he lacks in Lbs, he makes up abundantly for in affection.

The ginger boy is very clingy and likes to be close to his humans constantly.

"He doesn't necessarily need/want to be petted all the time. He just wants to be near me," Cheyna told Love Meow. "He normally crawls up next to me and kneads on me a bit, circles around, curls up and goes down for the count." 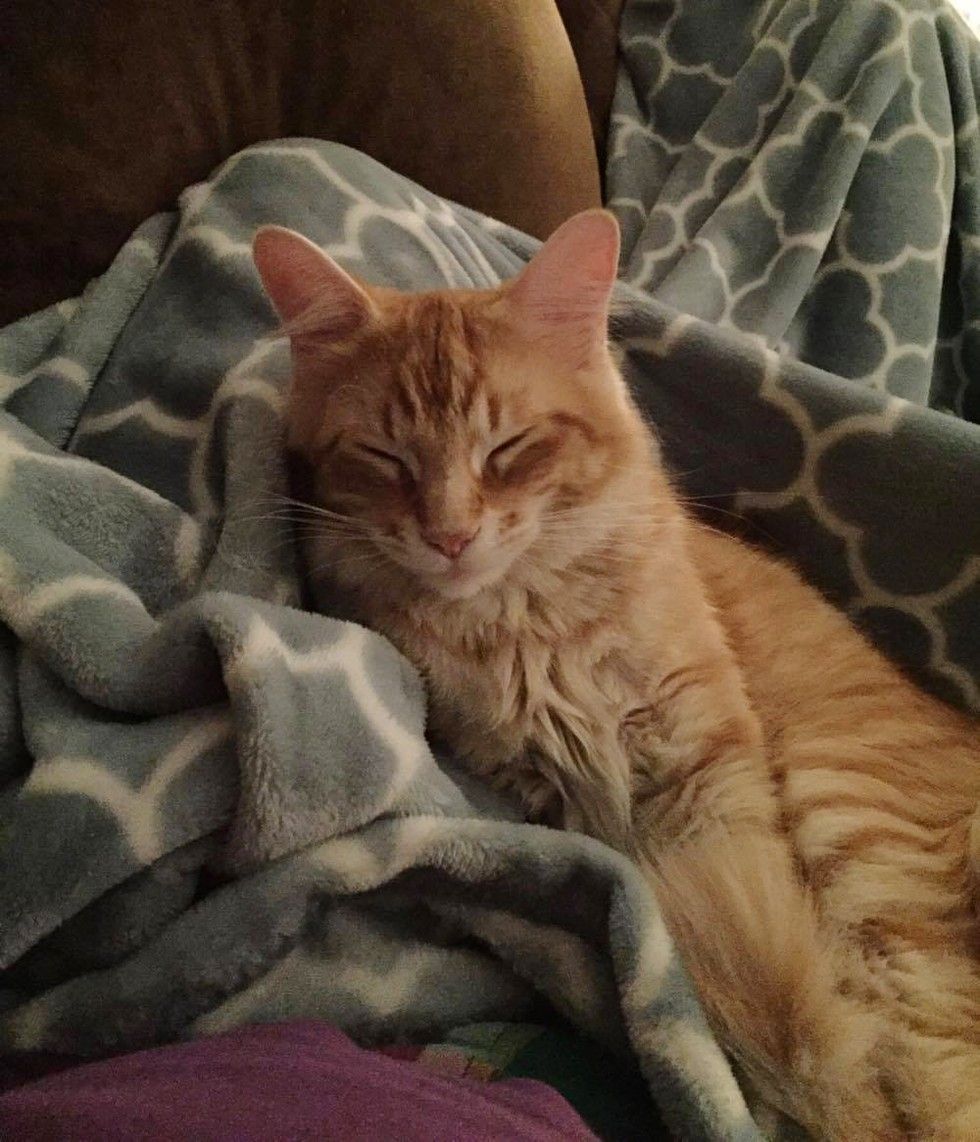 Pekoe is quite a character.

"He loves to act like he isn't paying attention and then slyly asks for a sample of whatever there is to offer.

"He meows when his water cup on the sink isn't completely full."

Pekoe snuggling with his bros, Jack and BB. 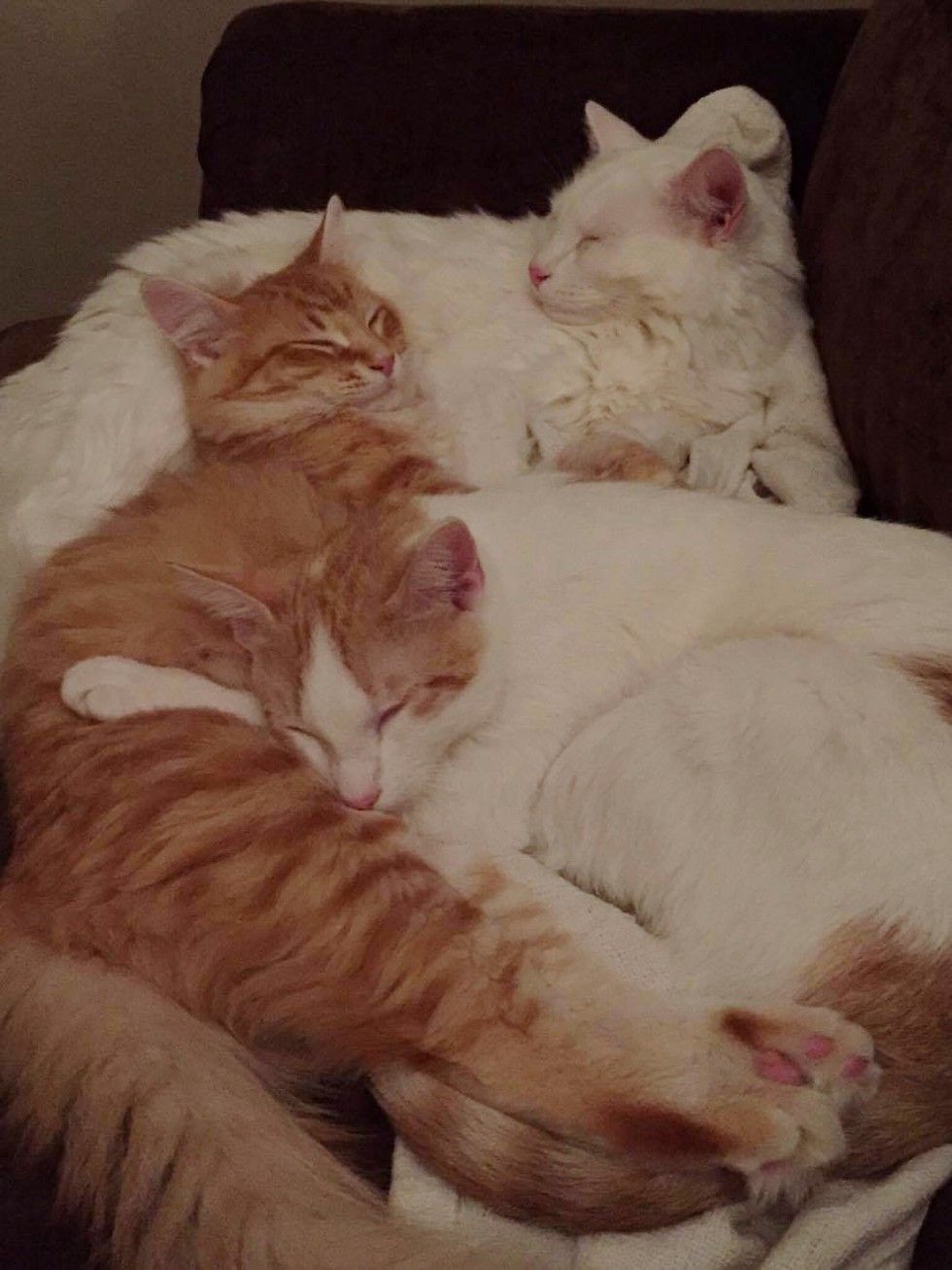 Last Christmas, Cheyna brought home an abandoned kitten, Millie. Pekoe immediately took to her and began to care for the little orphaned baby as his own. It was as if he knew his little friend in need could use some TLC. 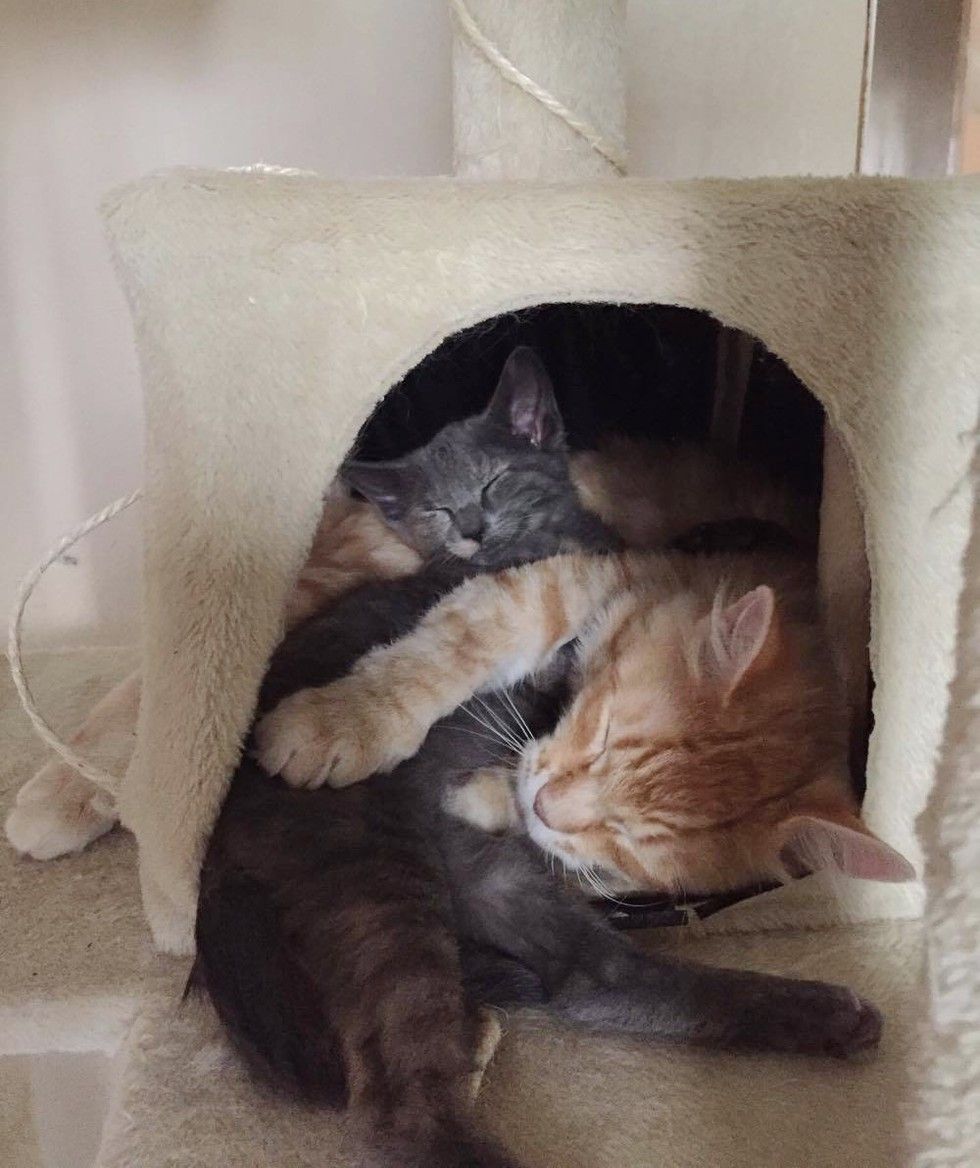 "It took me until he got over his little hump to give him a name. I was scared I would lose him," Cheyna told Love Meow.

"He is one year old now and loves to sleep on my bed and find the sun... I couldn't imagine not having him in our life." 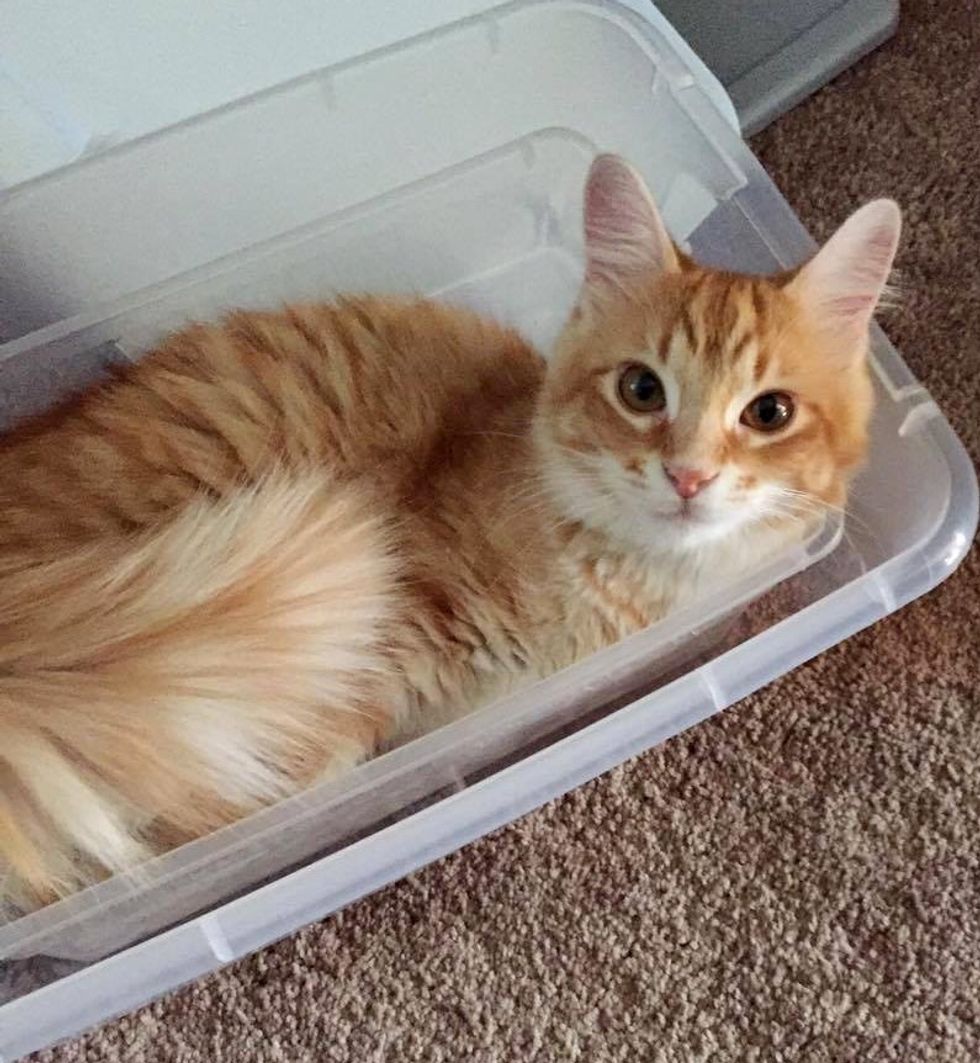 Related story: Couple Never Gave Up on 40 Gram Rescue Kitten Even Told She Wouldn't Survive, Look at her now!