Orphaned Kitten Found Shivering in the Cold, Woman Saved Her with Tiny Sweater

Nearly two weeks ago, a Good Samaritan found a little tabby kitten outside, shivering in the cold.

A tiny sweater helped save her life. 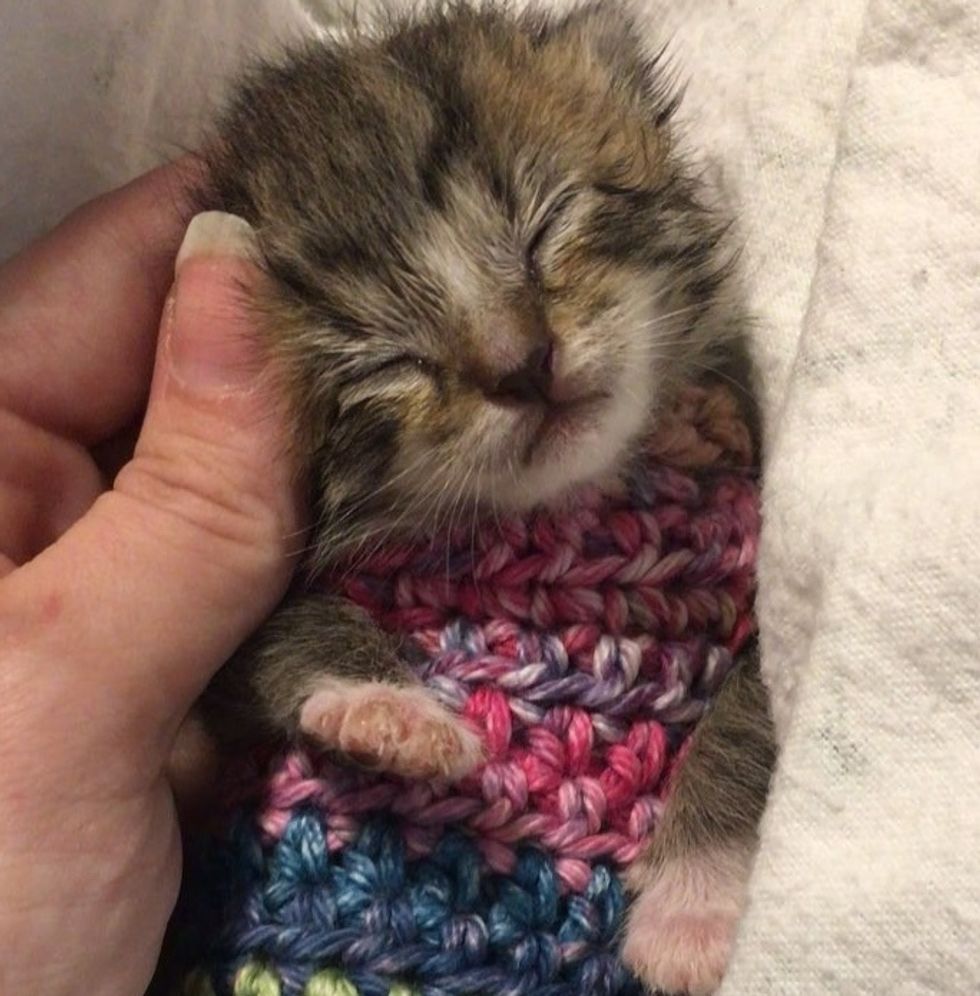 The 1-week-old kitten was brought in to Juliet's House Animal Rescue (in Greensboro, North Carolina) without a mother in sight.

"She was found abandoned outside all by herself. The people who found her waited almost all day to see if a mom cat might return to get her but to no avail," Casaundra Maimone, a volunteer of Juliet's House, told Love Meow.

The tabby was cold to the touch when she arrived. Casaundra knew the first thing she had to do was bring her temperature back to normal.

"I had to warm her up slowly before I could safely feed her. I wrapped her in a baby blanket and rubbed her with my hands for about 20 minutes," she said. 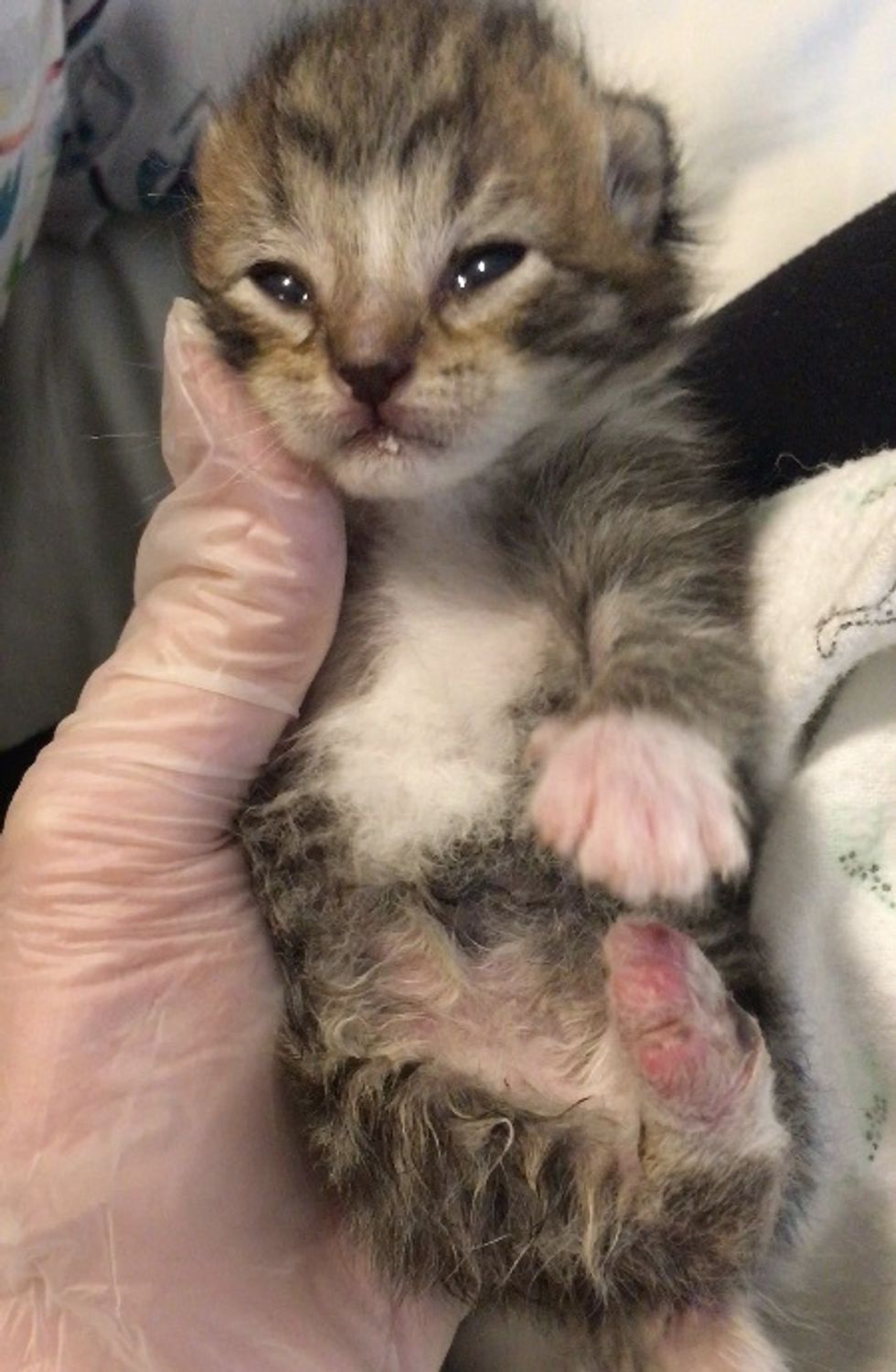 It brought warmth and life back into that tiny body. It was then Casaundra knew she was ready to be fed, one drop at a time. "When she first latched onto the bottle, I felt optimistic about her chances."

After getting some food down, the little bundle of fur perked up a little and even started to meow and purr. She was placed in a carrier covered in blankets with a heating pad set to low.

To help keep her warm at all times, Casaundra put her in a tiny onesie made just for orphaned kittens. 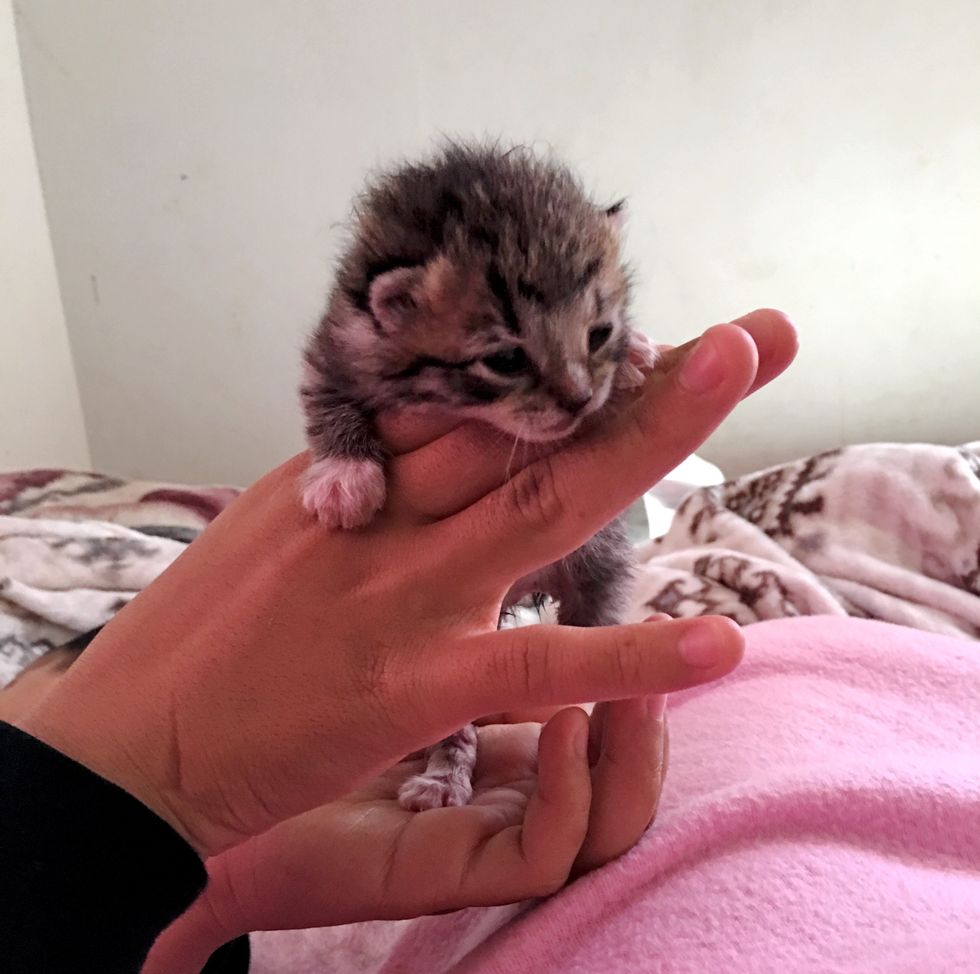 "She is very tiny and frail so the little newborn sweaters are perfect for her and help keep her warm. They are from an awesome non-profit project called 'Orphaned Kitten Sweaters,'" Casaundra said.

The tabby girl fell asleep in her foster mom's hand the first night. Her belly was full and she felt warm and comforted.

"Kittens under two weeks can't regulate their own body temperature yet so it's important to keep them in a temperature controlled environment." 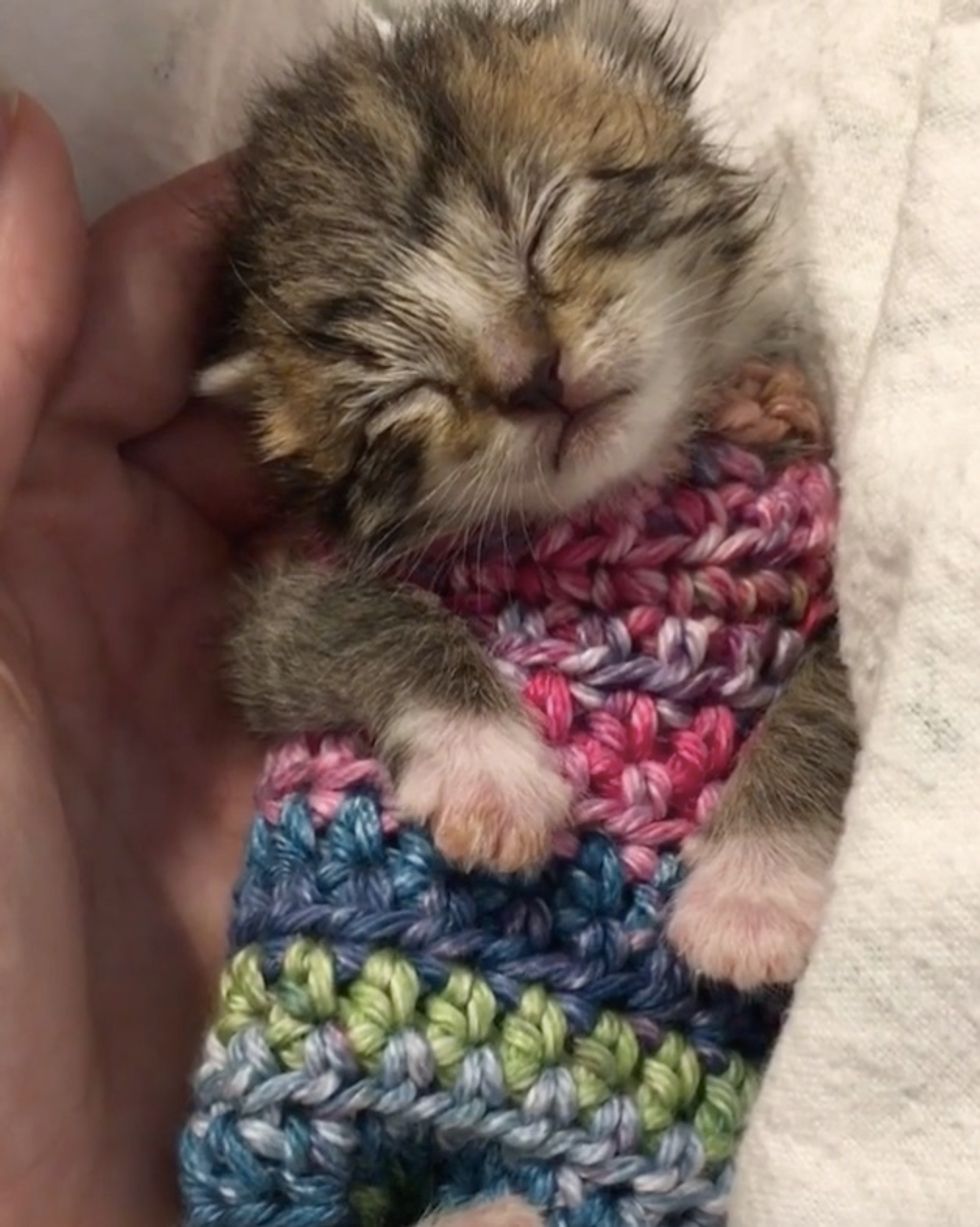 The kitty is doing much better. She has put on weight, gained plenty of strength, and even found a fluffy friend, Winnie the Therapy Dog, to cuddle with.

"Orphaned kittens bring with them hours of hard work, but also the reward of joy when they're finally adopted into a loving home," Juliet's House said. 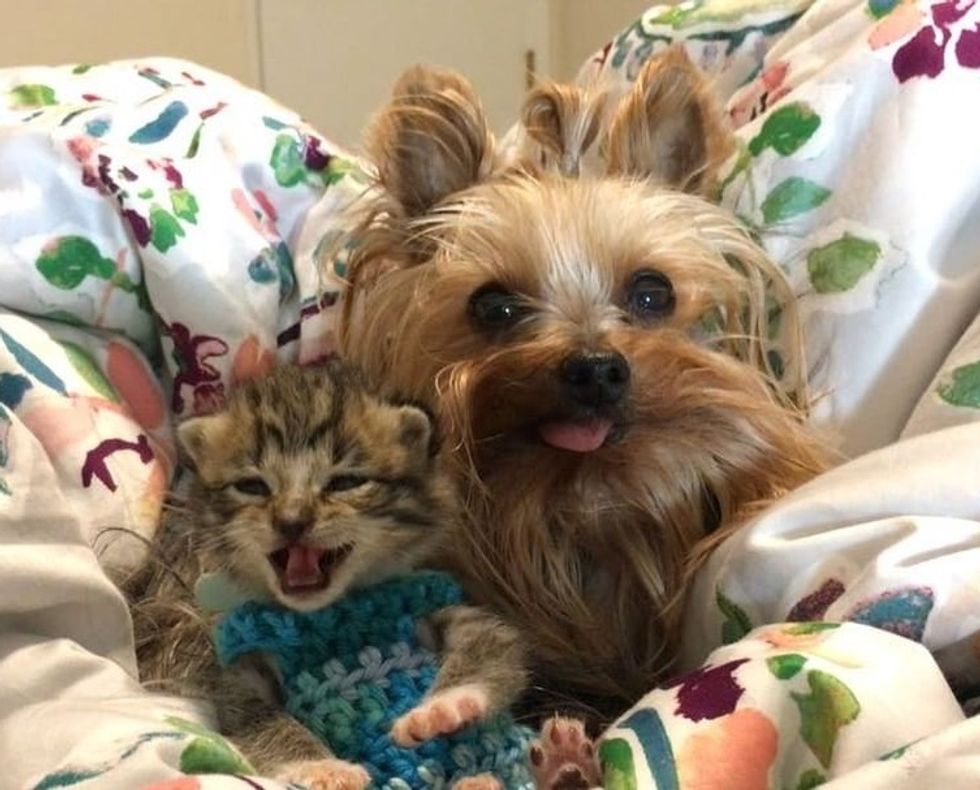 Watch the kitten rescue journey in this video:

A tiny sweater helped save the kitten's life youtu.be

Meanwhile, another orphaned kitten was brought to the rescue after she was saved from a river.

"The decision was made to keep the two kittens together so that they could have each other's companionship as they grew and learned," Robyn of Juliet's House told Love Meow. 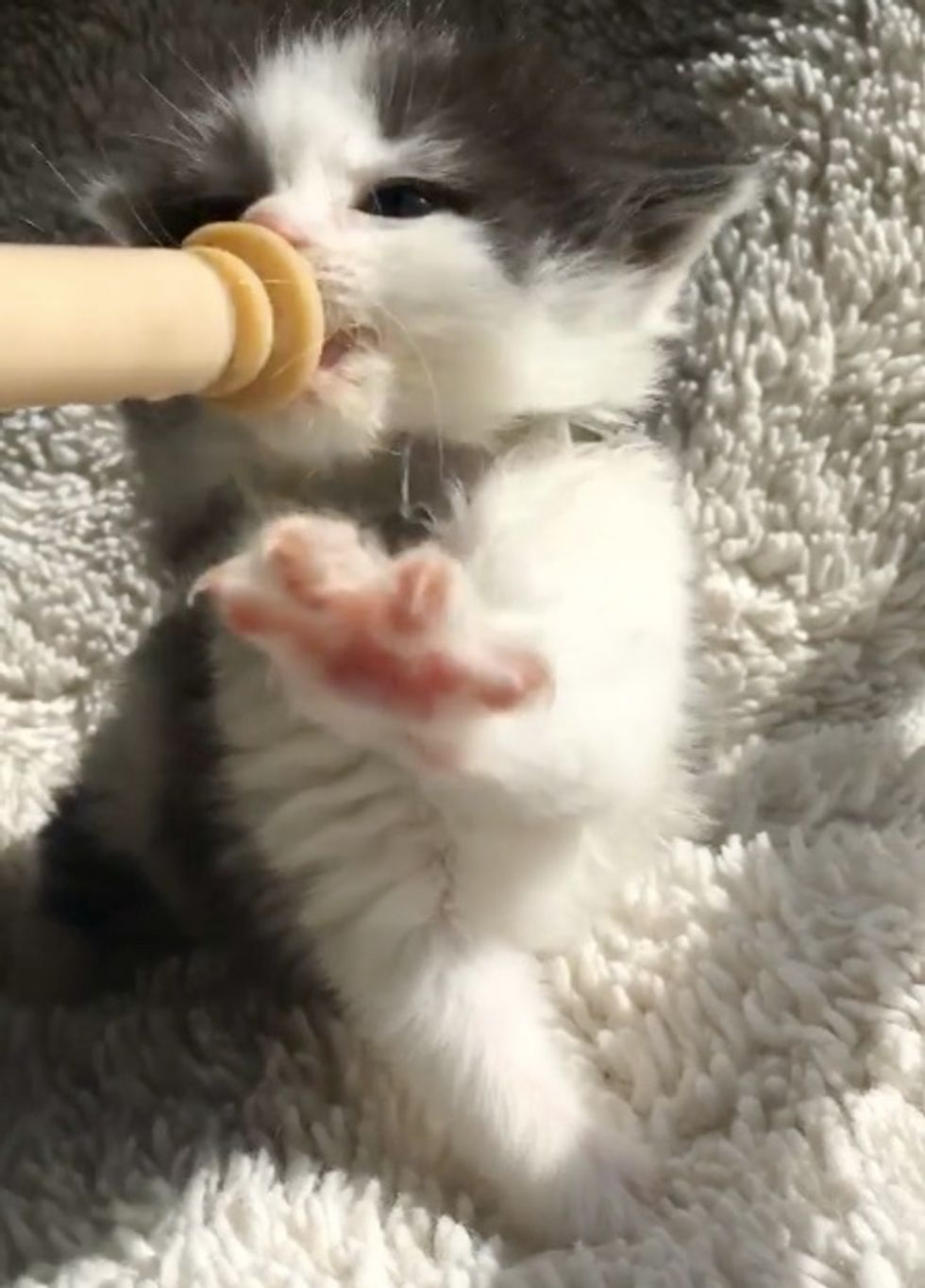 The little tabby girl is now eating like a champ and thriving.

She even got a kitten-sized bib to help her stay clean when she bottle feeds. 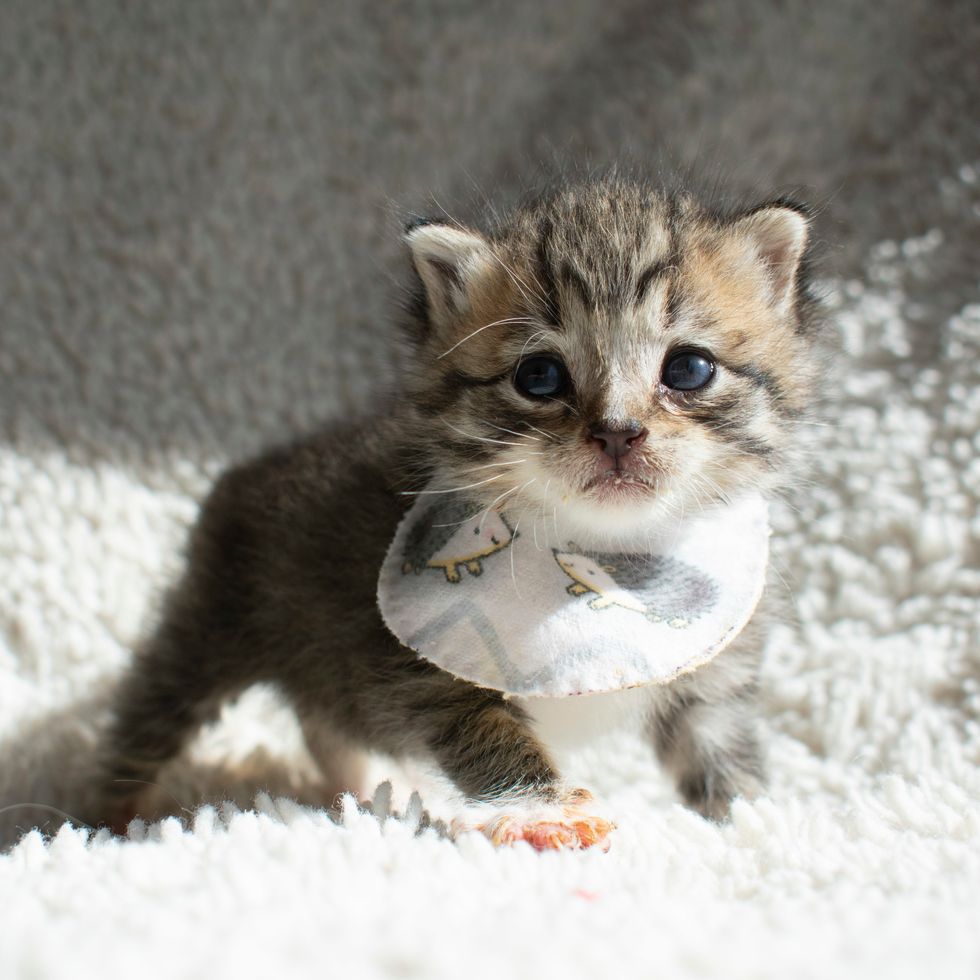 Related story: Kitten Lost Her Ears So Shelter Volunteer Crochets New Ones For Her