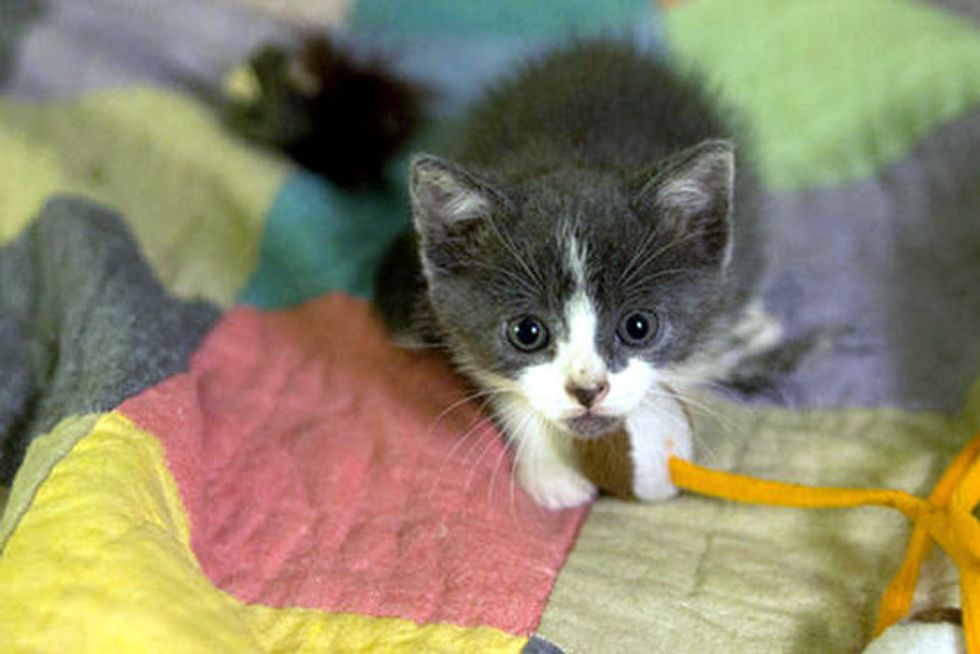 Kitten Rescued From Middle Of Street

A tiny kitten was found in the middle of the road. A woman saw the kitten, rushed to the rescue. (via Cuteoverload)

"On October 8, 2013, I was on my way to a meeting. I had taken a wrong turn and pulled over to try to sort out my location," said Susan C. "It was around 5:30pm so there was a good bit of traffic. Several yards away in the middle of the street I noticed some little critter and thought to myself 'That chipmunk sure has a long tail.' After a few seconds, I realized that it wasn't a chipmunk but a very small kitten in the middle of the road."

"As I watched, two SUV’s barely missed flattening the poor baby. I drove to the kitten as quickly as I could and when I got out of the car, the tiny gray and white kitten looked up at me and mewed. I said, 'Oh, come here, baby' because I'm a crazy lady who talks to cats.

He had a bloody little nose and his eyes were very runny. I asked some people in the neighborhood if anyone knew of a cat with a litter…, but no one knew of one. Based on his rough appearance, I surmised that he was probably from a feral litter. I took the little guy to our local emergency vet and they said the bloody nose was just a scrape and gave me some ointment for his eyes.

She estimated his age at four weeks. On the way there, I called my husband to tell him of my find and he said 'I guess we have a new kitten.' We did indeed have a new kitten. Oliver, named after another fortunate orphan, joined our cat household of Buddy and Missy and now he is a beloved member of the family."

Meet Oliver, who was found in the middle of the street. "As I watched, two SUV’s barely missed flattening the poor baby. I drove to the kitten as quickly as I could and when I got out of the car, the tiny gray and white kitten looked up at me and mewed."

No one in the neighborhood recognized the kitten, so she brought him home. This is Oliver poking out of the box in his new home, meeting the cat residents, Buddy and Missy.

His very first fitting in a box experience.

Oliver sharing the Cat TV with his new furiend.

Buddy and Missy invite him to nap with them.

"Everything is ok now."

Needless to say, Oliver is fitting in just fine.

This is Oliver when he was rescued from the middle of the street.

All grown up now. Oliver is a beloved member of the family

Photos by Susan C via Cuteoverload.