Kitten Found Huddled on the Road, Clings to Rescuer's Shoulder and Won't Nap Anywhere Else

Stacey Bradshaw found a kitten in the middle of the road in Virginia. Once she got him to safety, he crawled up on her shoulder and wouldn't let go. 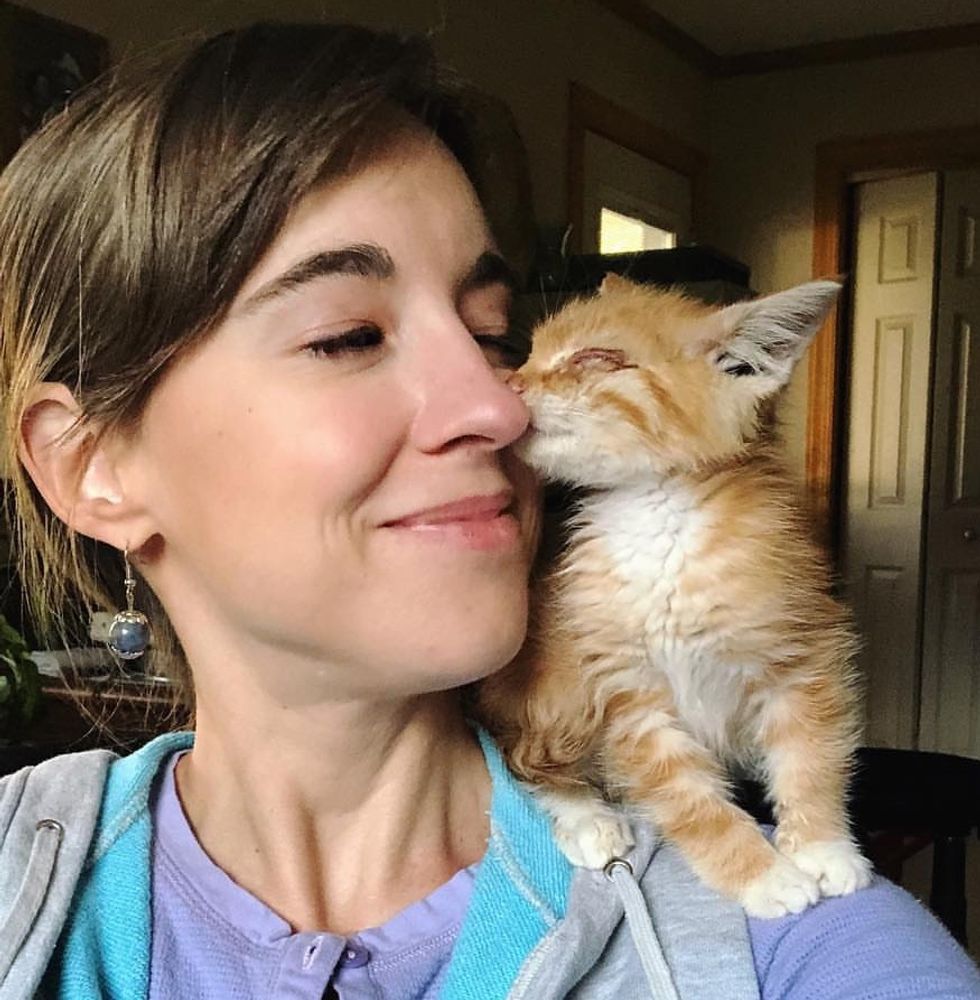 A month ago, Stacey was on her way to her grandparents' when she spotted a tiny kitty huddled on the road near the highway. "I pulled my car parallel to the highway and walked around the car towards the kitten," Stacey told Love Meow.

The kitty immediately took refuge under her car, behind a rear wheel. Stacey was able to reach through the wheel and gently pull him out through one of the holes. "He was so tiny. I held him close to me and got back in the car."

As soon as the kitten realized he was safe, he made his way up her shoulder and nuzzled right in the crook of her neck. "He never resisted me or acted scared of me." 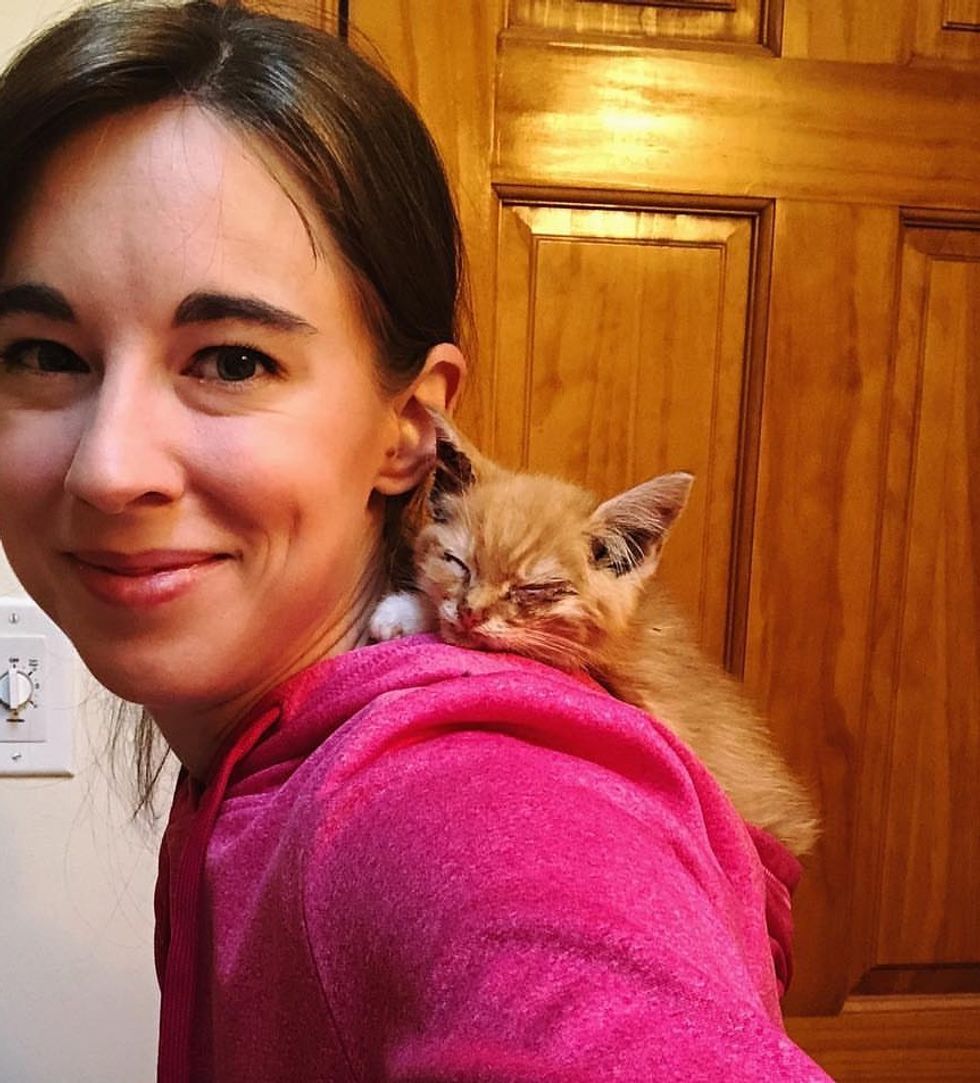 Stacey's grandparents called the neighbors on the road to see if the kitten belonged to someone, but no one claimed him. Despite already having three dogs and two cats in her house, Stacey brought him home and named him Pumpkin.

"I knew I had to help him because he was tiny and sick." 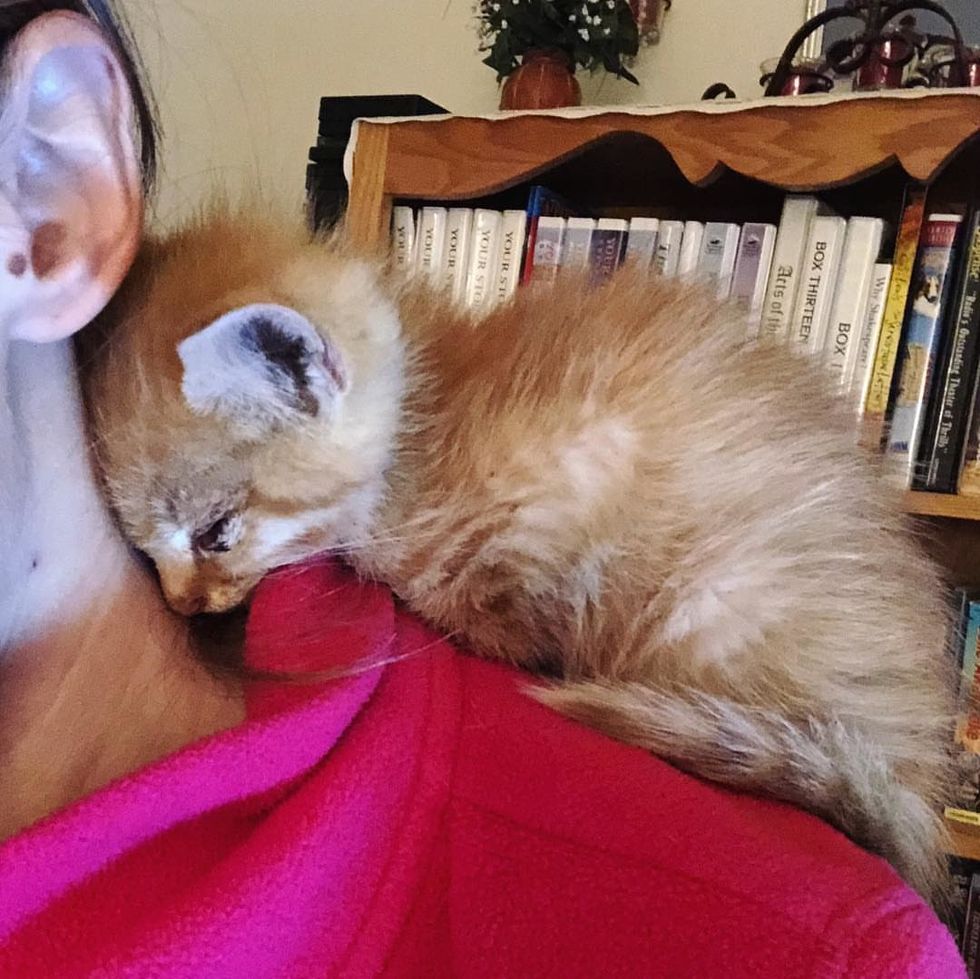 Pumpkin got a much-needed bath to remove the pesky fleas. He scarfed down all the food his belly could possibly fit in. After a big meal, he crawled back on Stacey's shoulder and purred himself to sleep.

"From the very beginning, he just wanted to snuggle on me and sleep. He fell asleep snuggled down on my shoulder with his head against my neck the very first night I brought him home," Stacey told Love Meow. 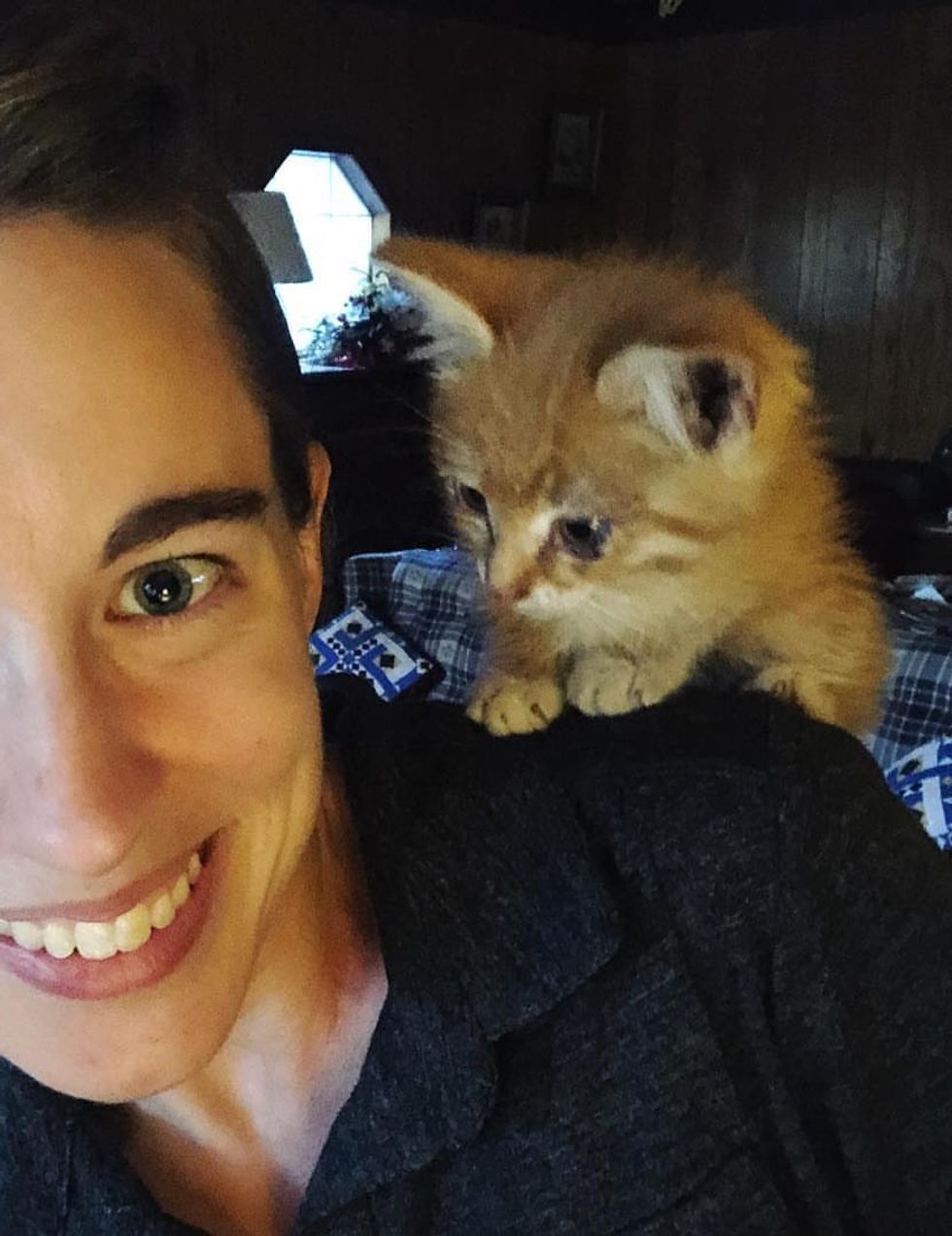 Pumpkin was estimated to be eight weeks old when he was at the vet. "He got medicine for his cold and they cleaned out his ears (ear mites)."

A few days later, Pumpkin was a lot more energetic and started to explore around the house. But he always crawled back on his human's shoulder when he needed a nap. Each day, Stacey fell a little harder for Pumpkin, and she couldn't bear the thought of having to part with him. 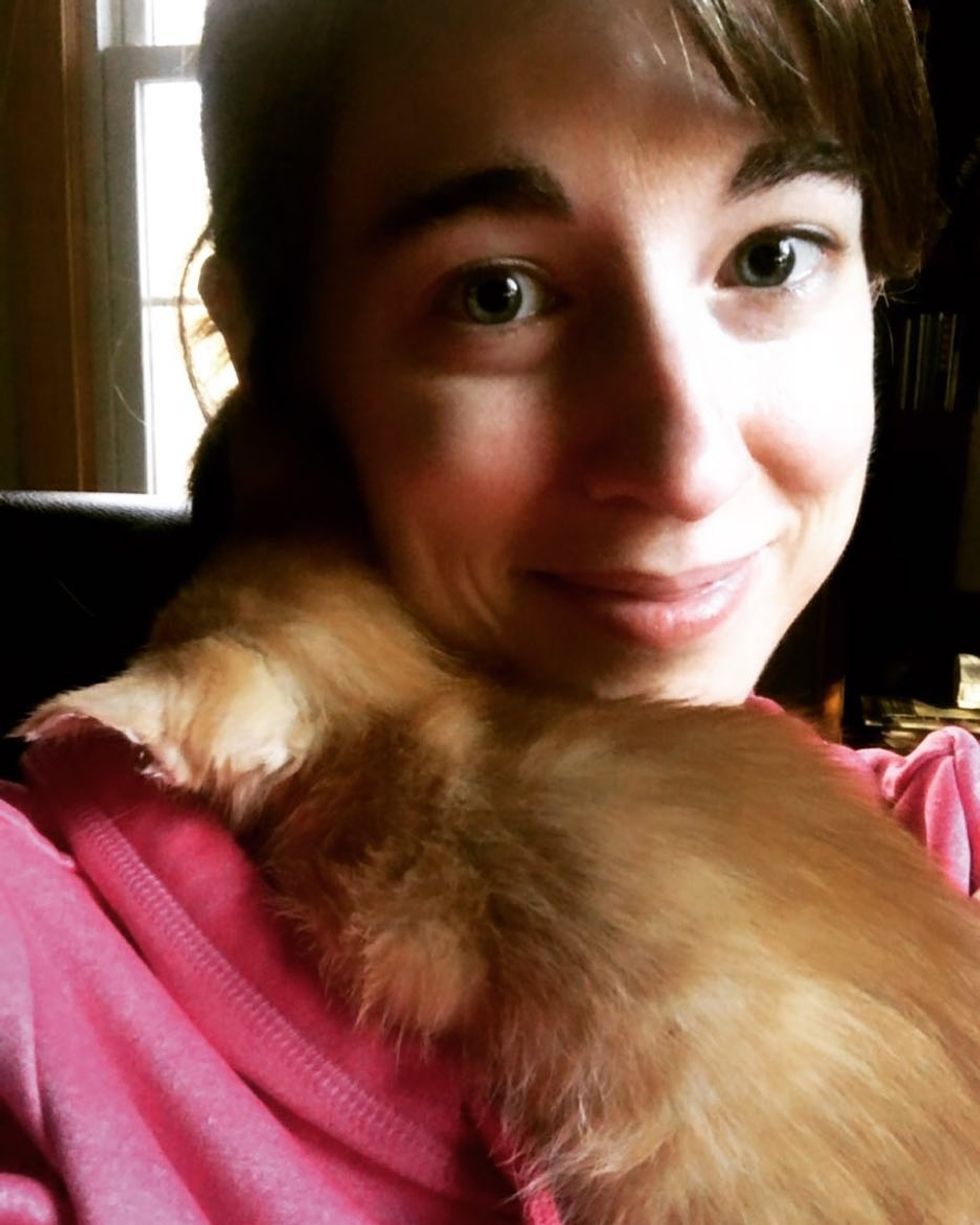 Pumpkin would cry if Stacey was away, and wanted to be cuddled constantly. Leaving for work had become extremely difficult.

"We bonded right away after I picked him up out of the middle of the road, and he wanted to be with me every minute. He loved to sit on my shoulder and nap on the back of my neck." 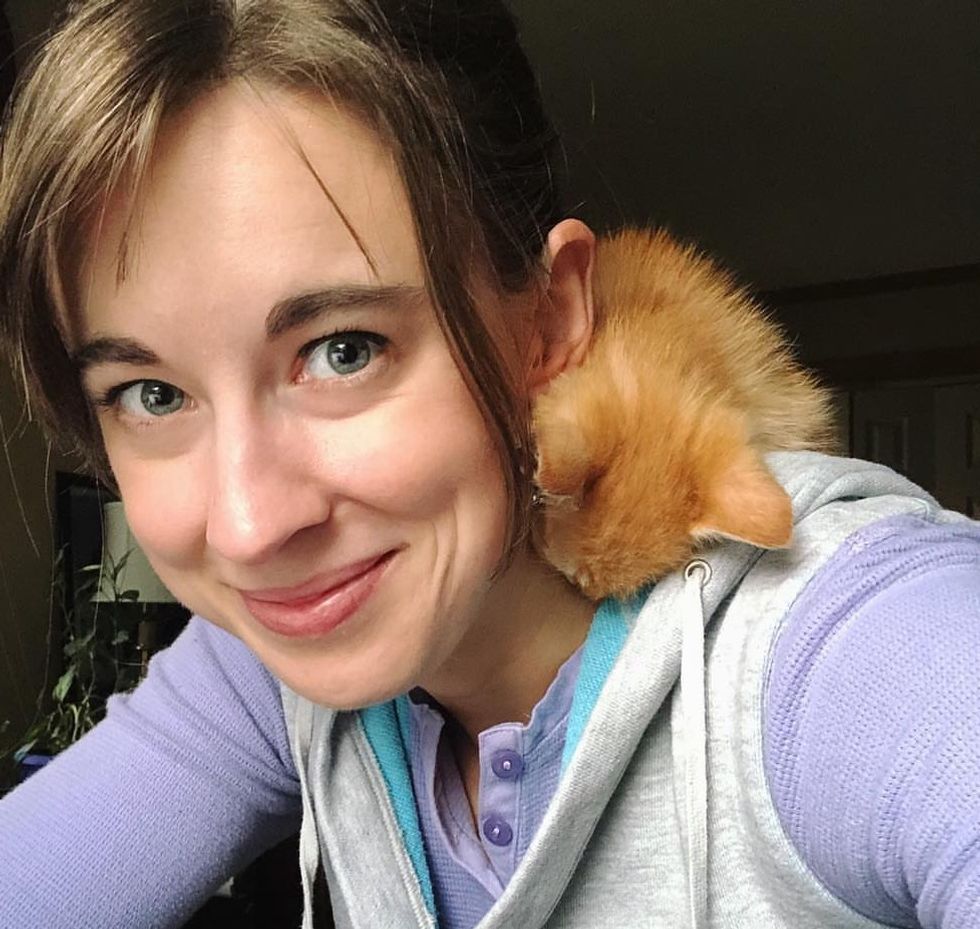 "Two weeks after I brought him home, my grandparents agreed to adopt him so I could see him as much as I wanted. I was so happy," Stacey said.

Watch the kitty's rescue journey in this cute video:

Kitten clings to rescuer after she saved him from the roadyoutu.be

Pumpkin now has a big family that adores him. Whenever he needs a cuddle, he has many laps to go to.

"I placed him in my Papa's lap. He laid down and fell asleep." 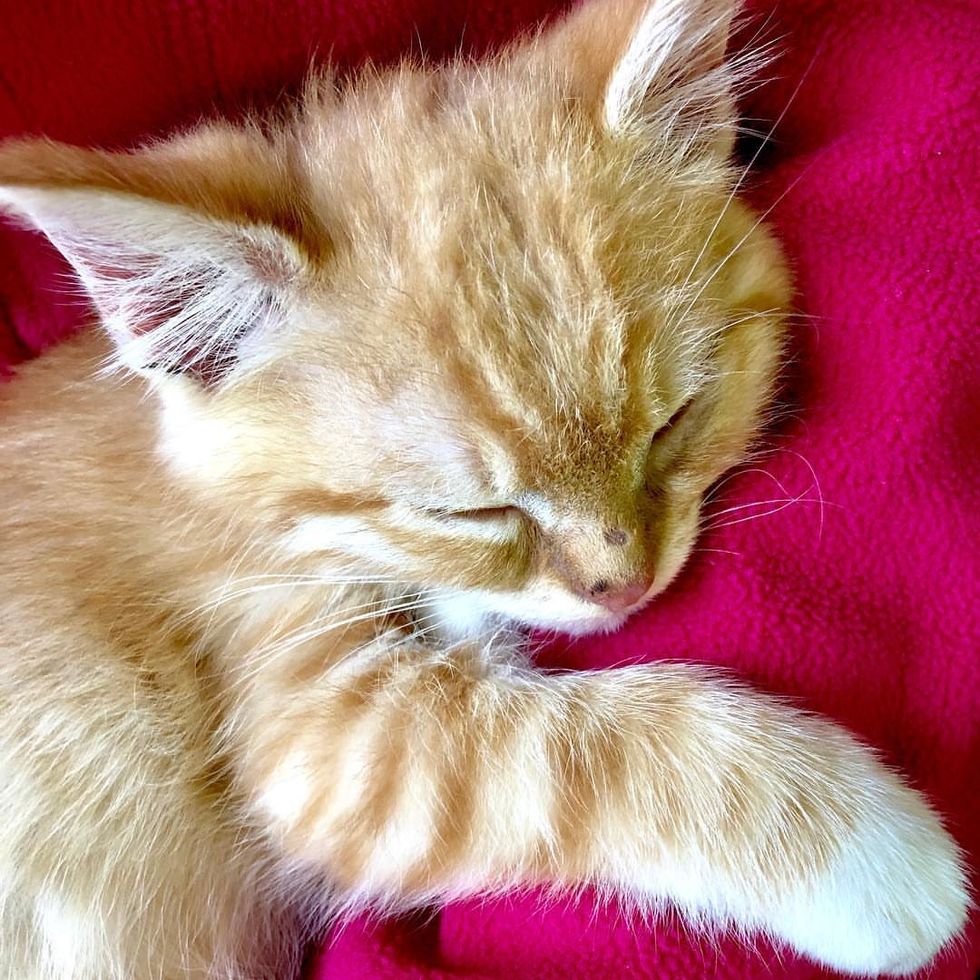 "I'm so glad he's healthy and happy, and I laugh all the time at his silly, adorable antics!"

Pumpkin is growing by leaps and bounds and is very playful and rambunctious. He enjoys cuddle time with the family and makes sure that no one is alone in the house. 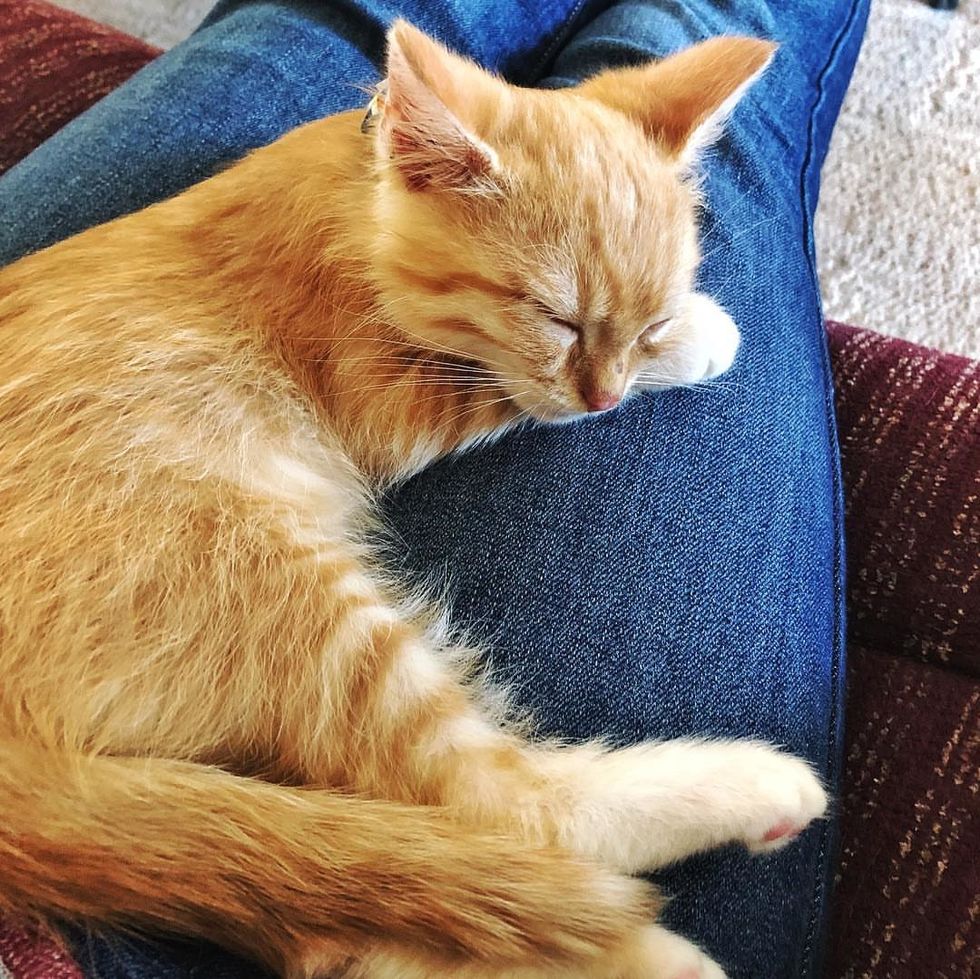 "I'm so happy I found him that day and that he could become part of the family," Stacey said.

"It has been wonderful to see him transform from a tiny, sick kitten to a growing, healthy, happy one!" 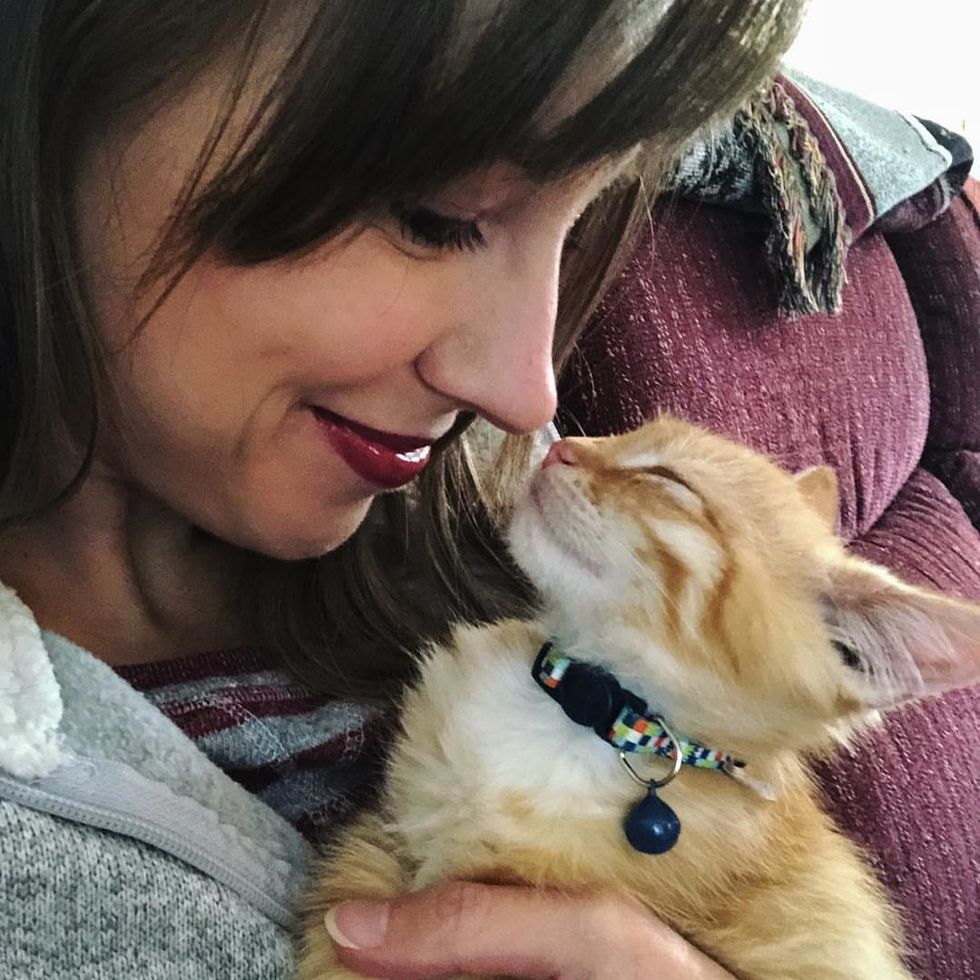 A month after he was rescued... look at him now! 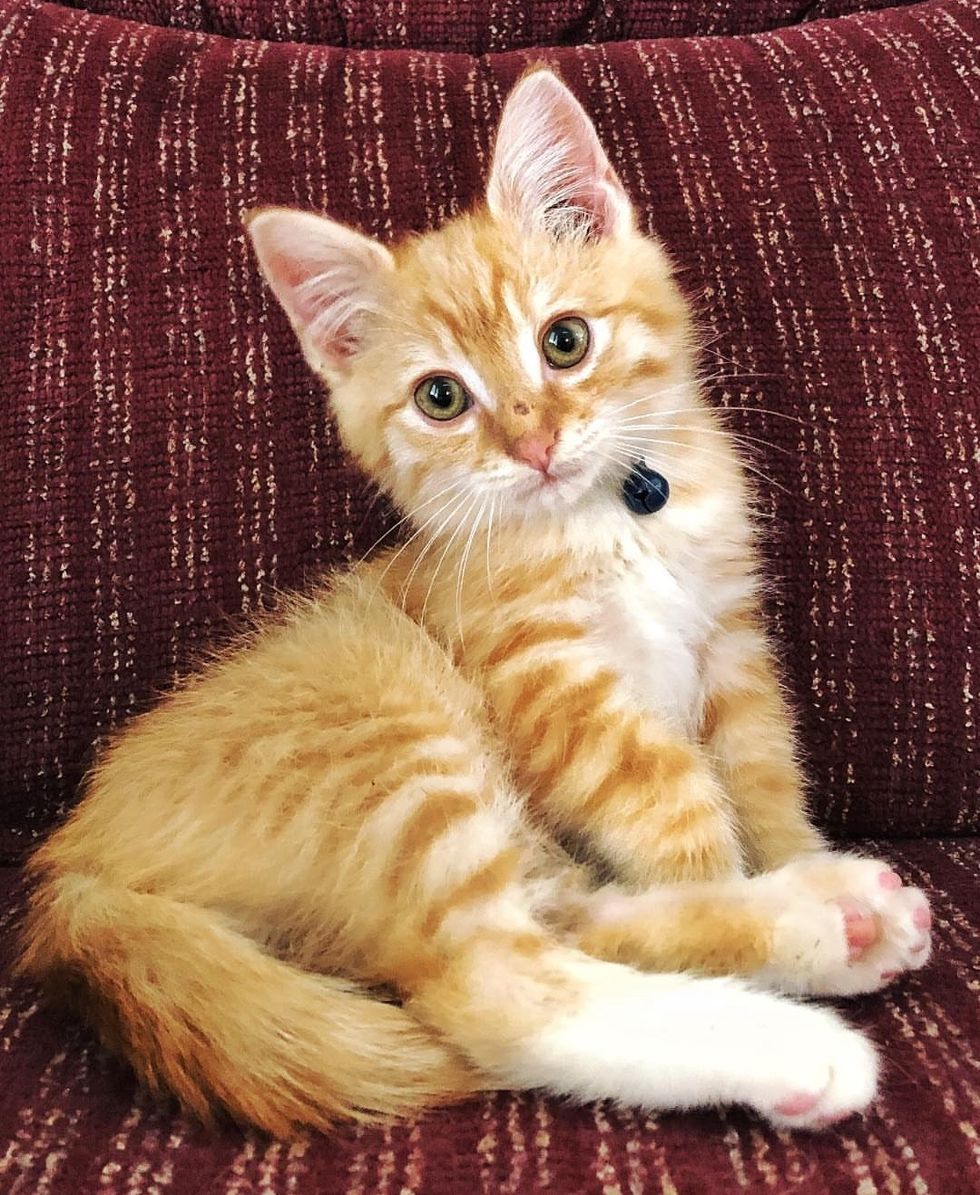 Related story: Man Saves Kitten Stuck on Busy Road While Others Keep Driving by - the Kitty Cuddles Him and Won't Let Go