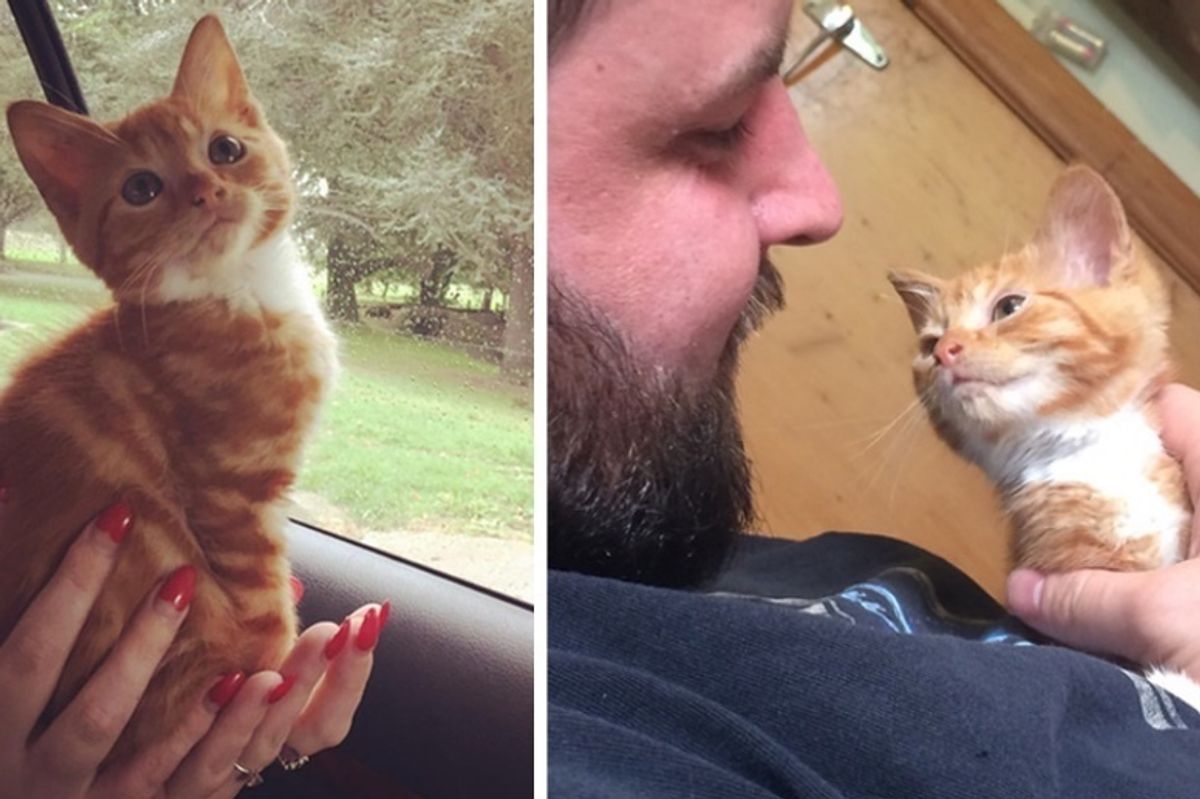 A kitten was given a second chance at life when a woman took him in from an uncertain fate.

He clung to her for comfort and didn't want to let go. 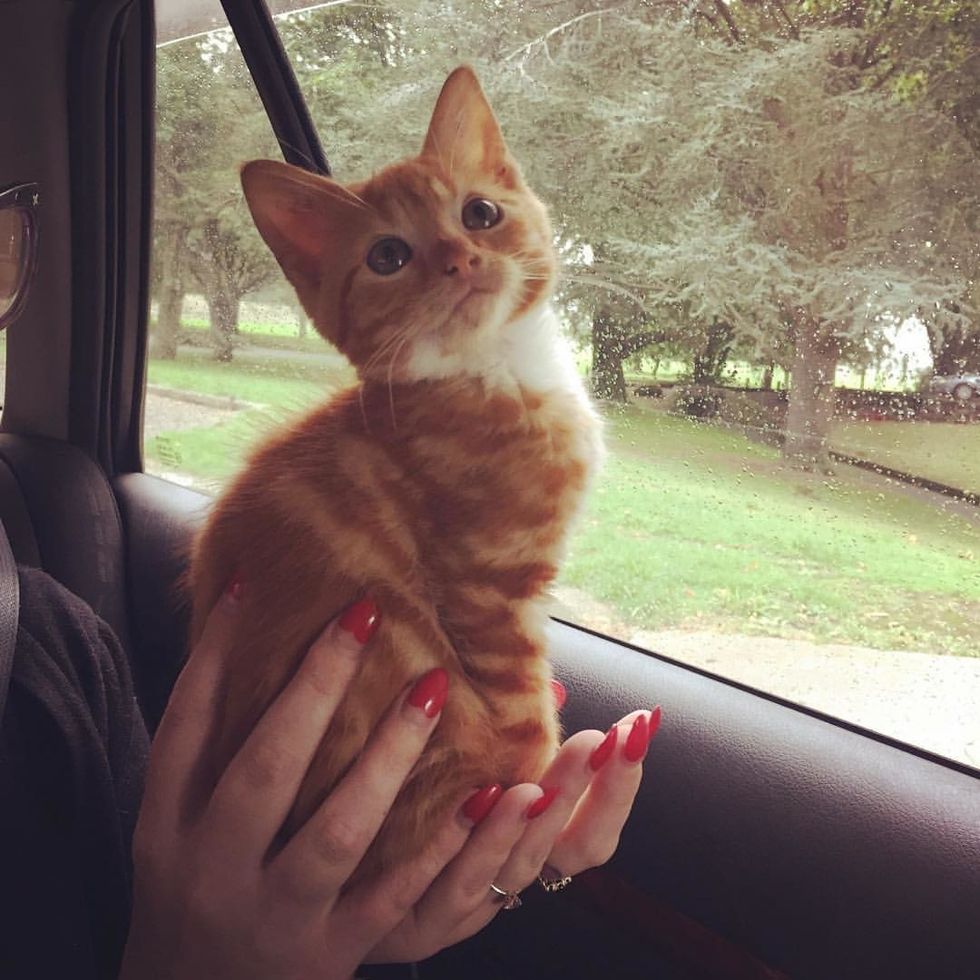 Widdle was six weeks old when he and his sister were rescued by the Kitten Inn in Lower Hutt, New Zealand. Right away, they noticed that the ginger boy was much smaller than other kittens his age.

Despite his tiny stature, Widdle was a bundle of energy and would meow and chirp for attention all the time. He didn't want to be alone and was eager to be loved.

Jessie, a vet nurse, took him and his sibling home to foster. The little guy liked to cling to warm things. As soon as she picked him up, he climbed on her shoulders and started to snuggle. 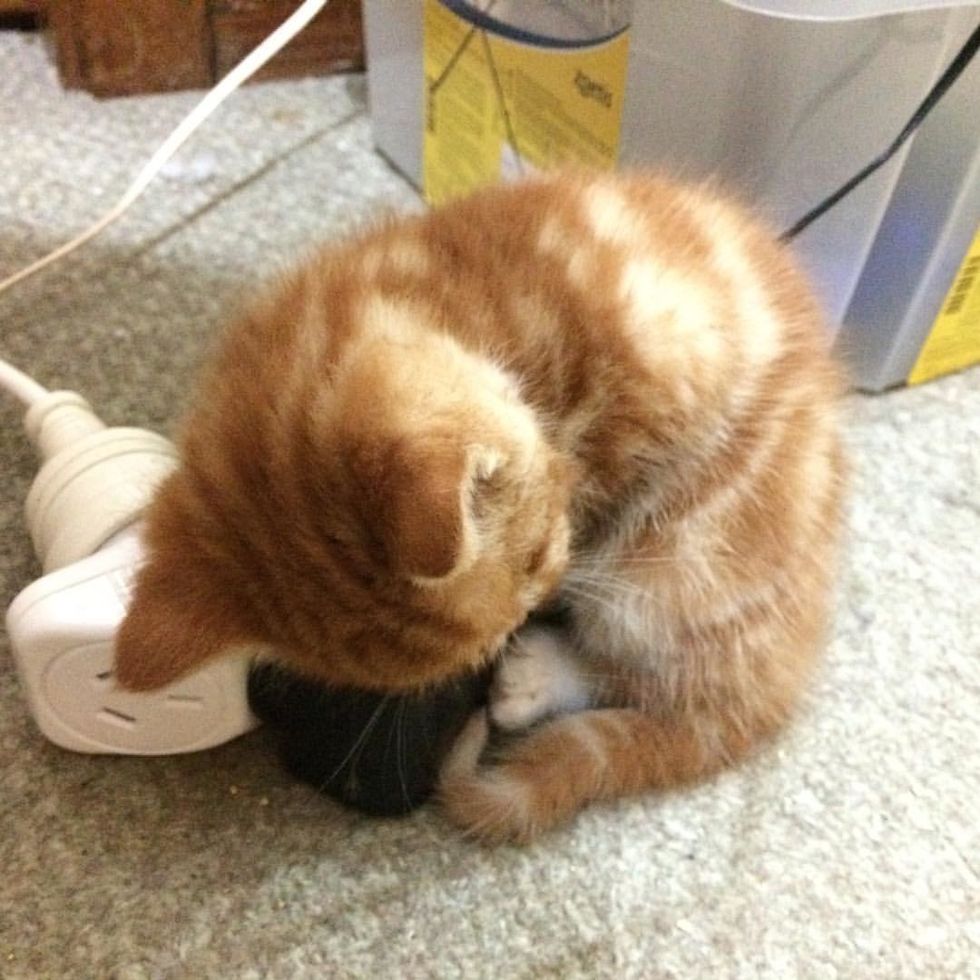 Jessie noticed that the kitten was not growing as fast as other kitties. "I fostered him for months while he didn't really grow. His sister and foster siblings all grew as normal and were returned to find new homes," Jessie told Love Meow.

"Widdle stayed and stayed. He wriggled his little orange way into our hearts and souls." 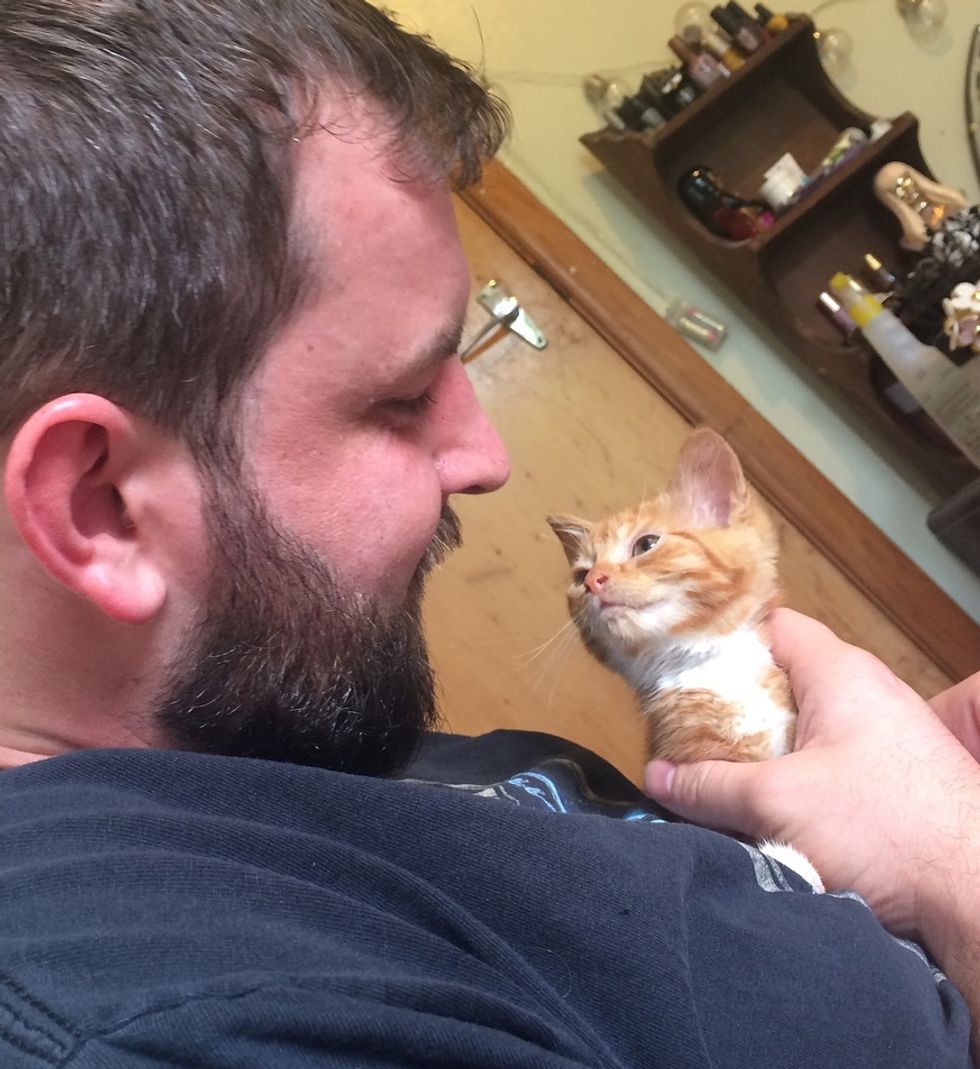 Widdle only naps with his humans. He's a very clingy kitty who just wants to be loved. 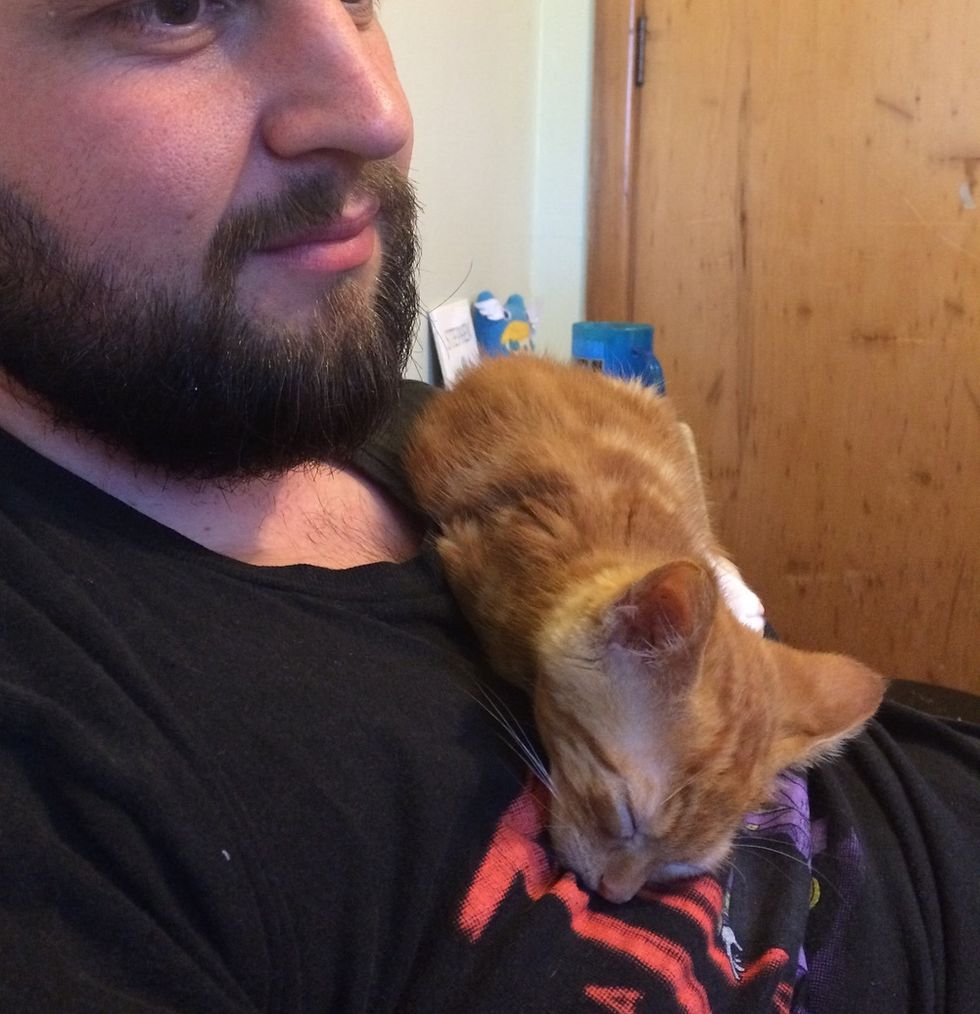 Jessie brought Widdle to work nearly every day as the kitty insisted to tag along.

"He is a shoulder cat through and through, to everyone - whether they like it or not," Jessie added. "He is the happiest little critter and very relaxed and loving. He hops onto everyone's shoulder so he can be tall. He is my pride and joy." 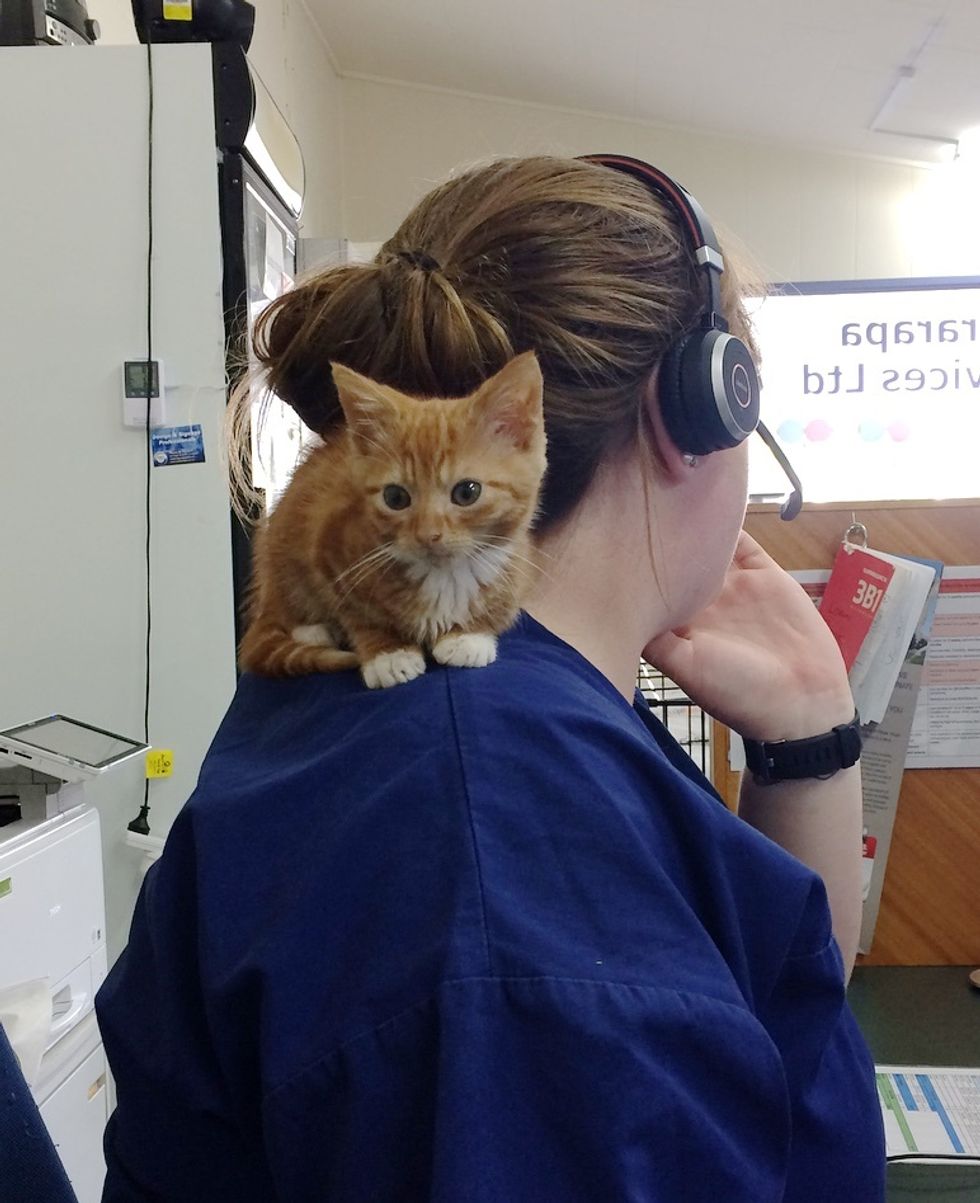 He will most likely stay tiny forever but Widdle has a big heart and so much to give. 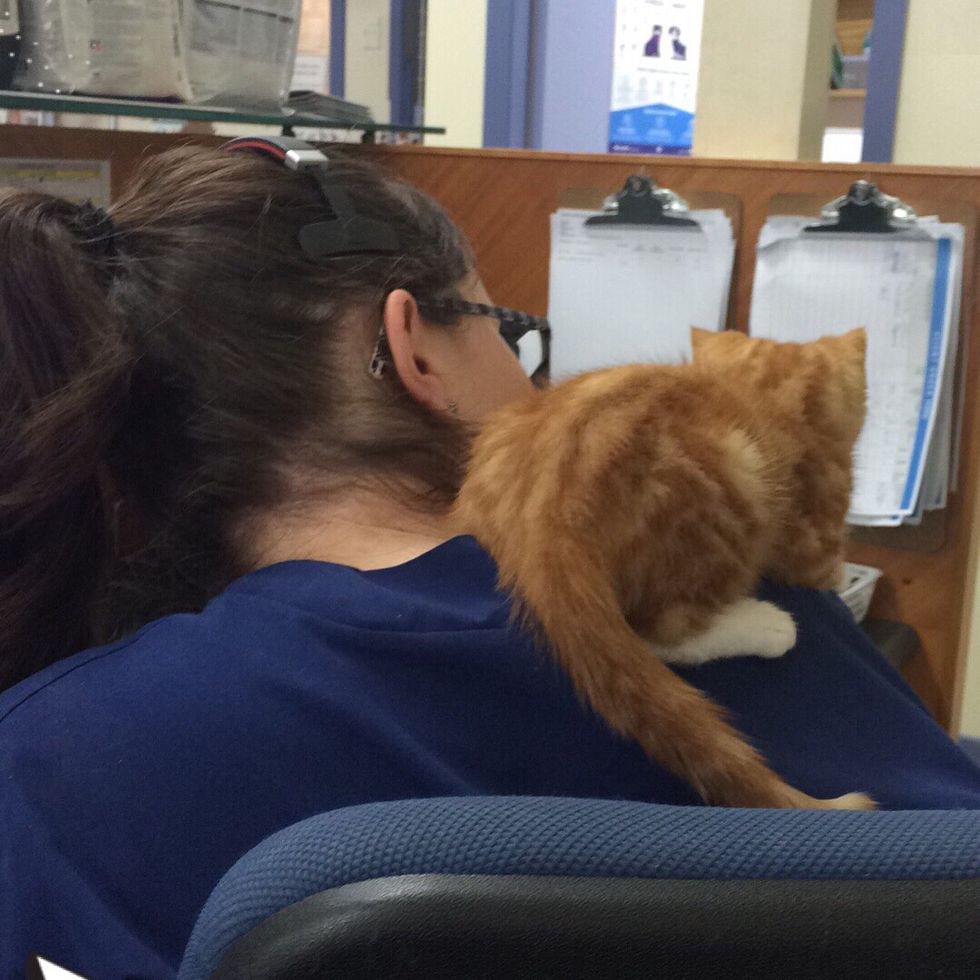 When he is not perching on his human's shoulders, he is all curled up in their arms, purring up a storm. 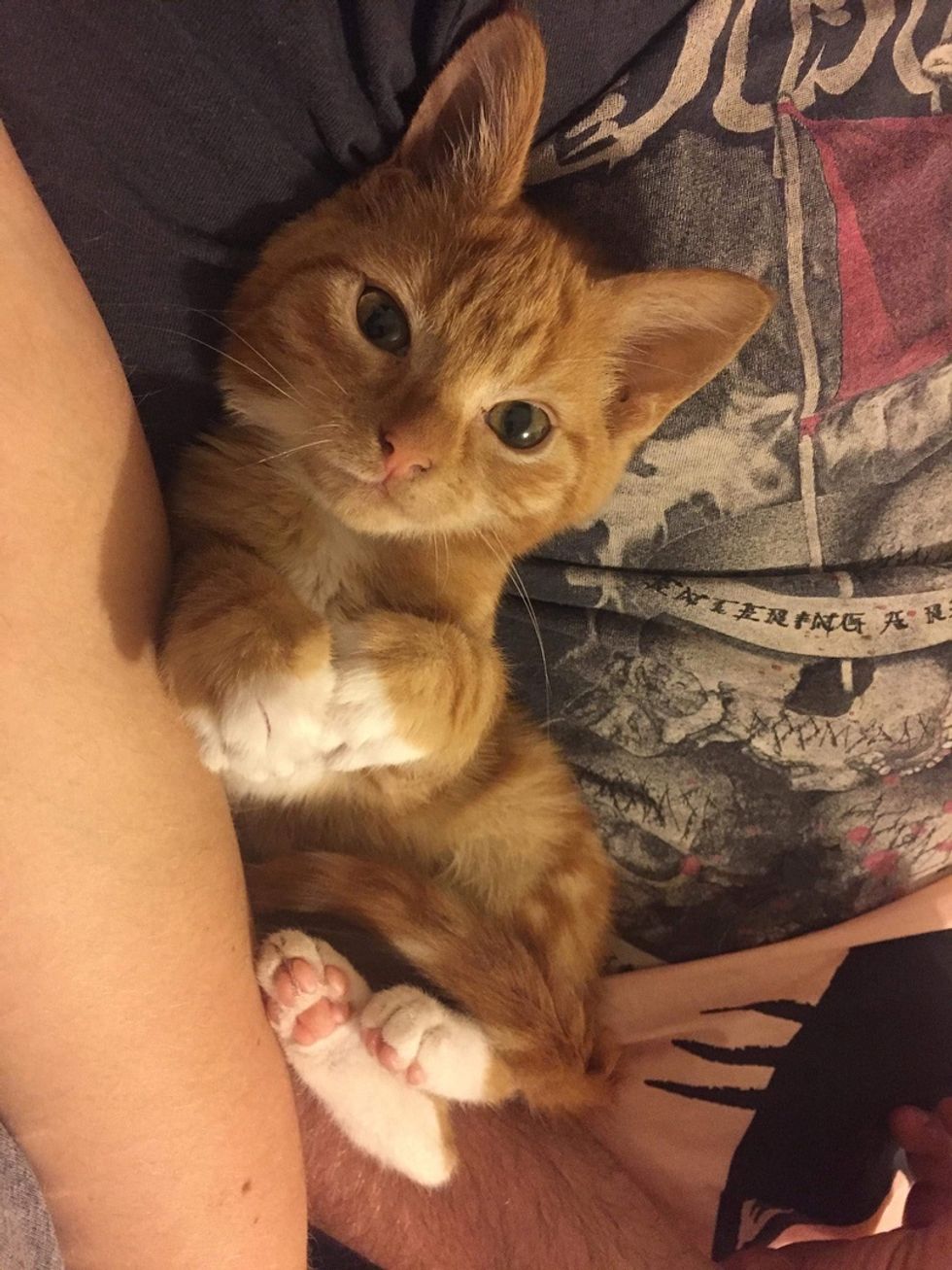 Widdle is happiest when he is all snugged up next to his human. 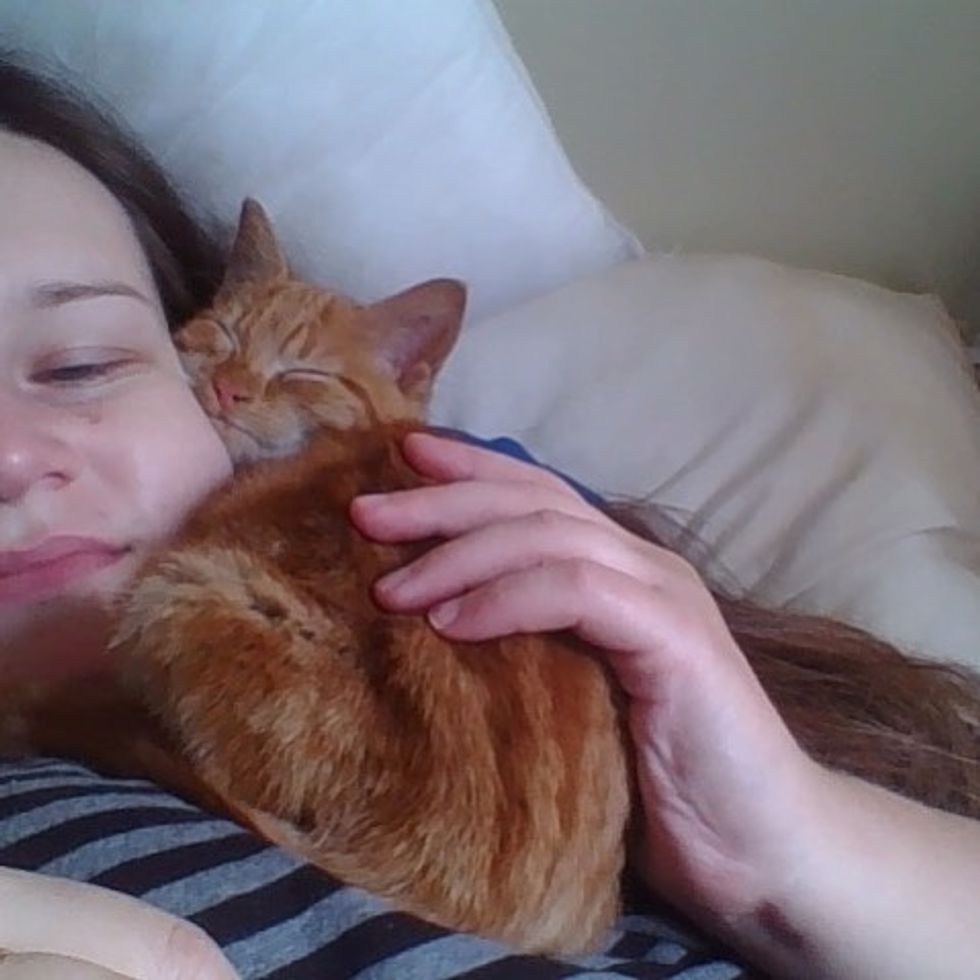 Holding his human dad's hand with his paws. 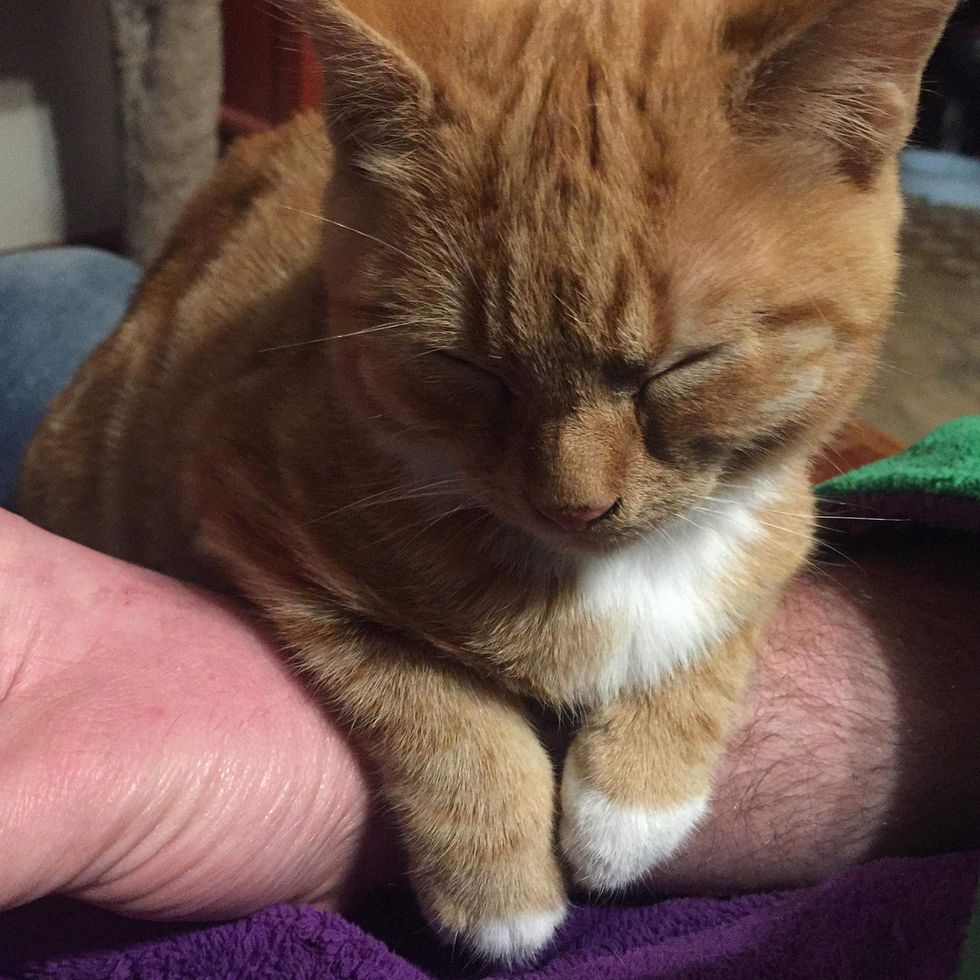 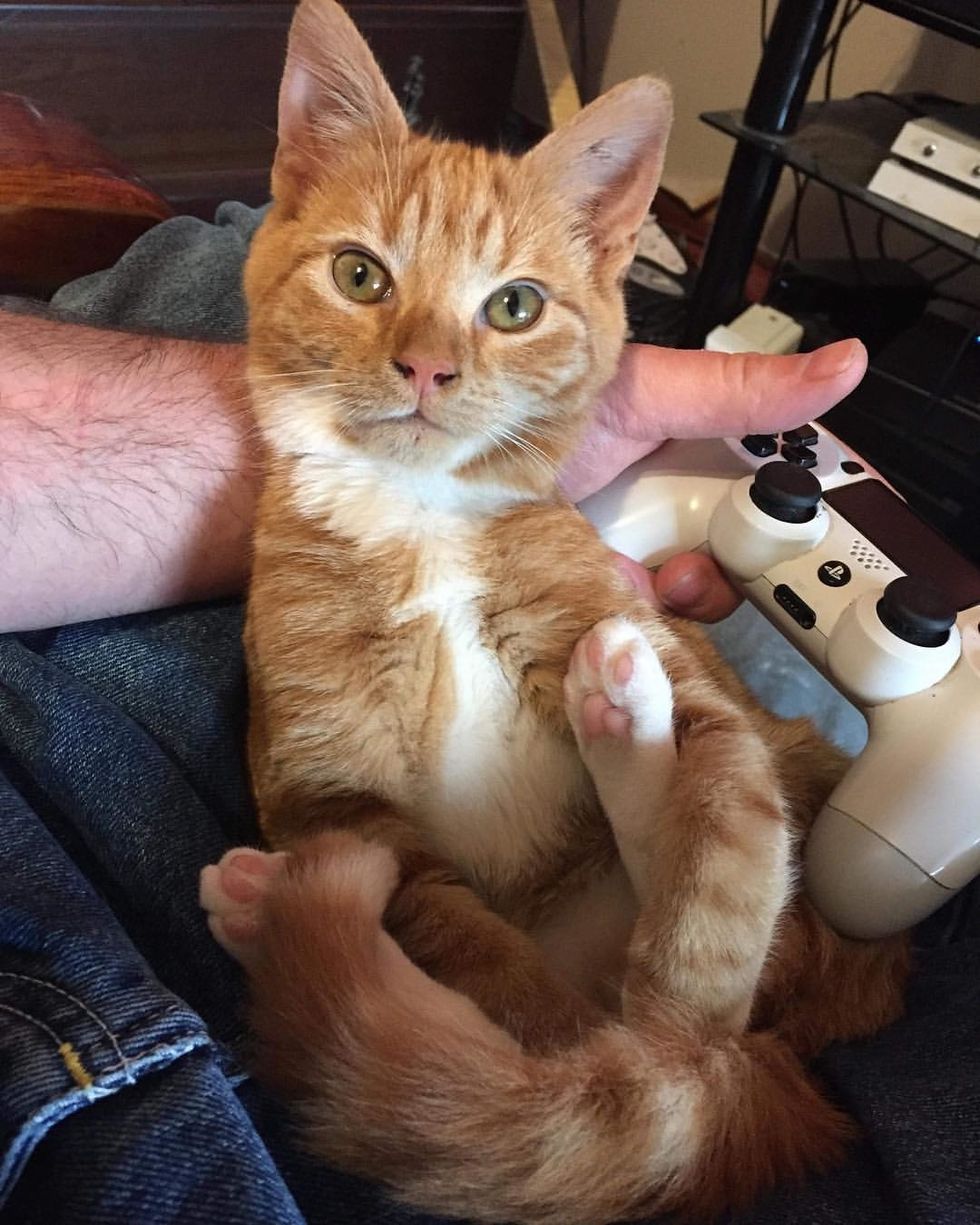 Pay attention to me meow! 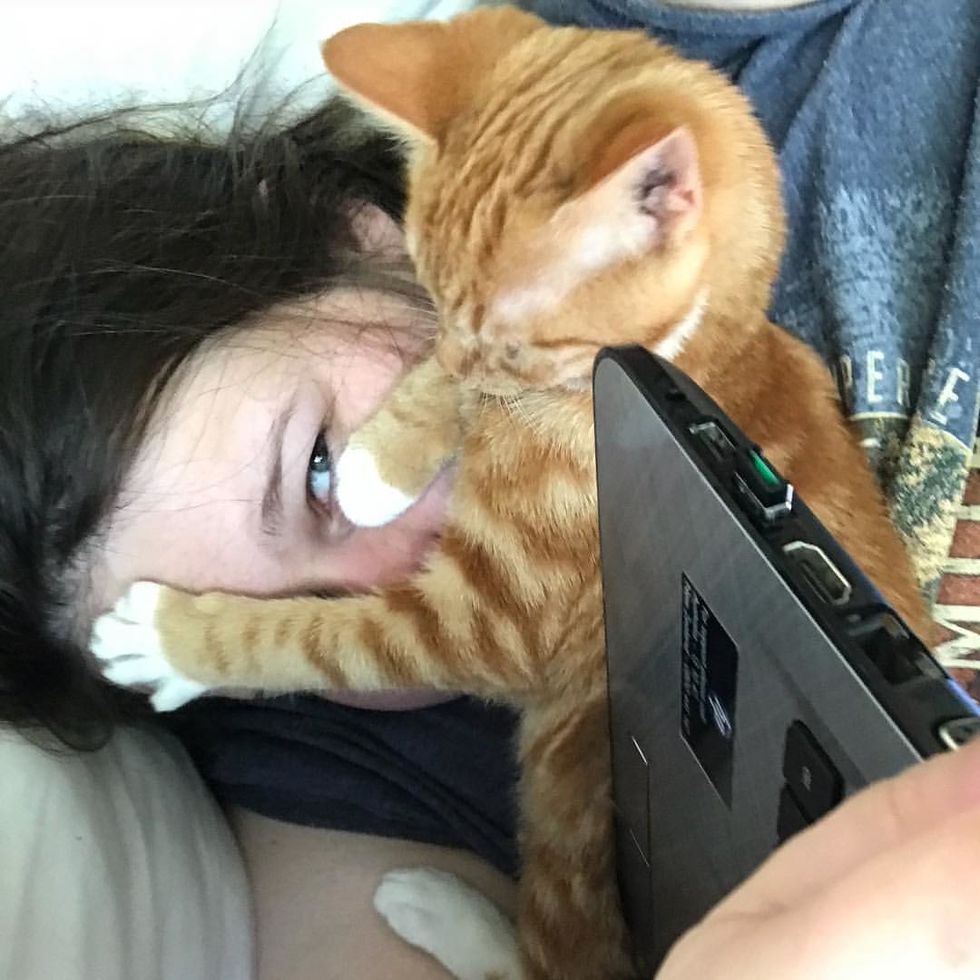 It's been half a year since Widdle came into their lives.

"He's still small enough to fit on a shoulder just right! I can't walk into the living room without being perched," Jessie said. 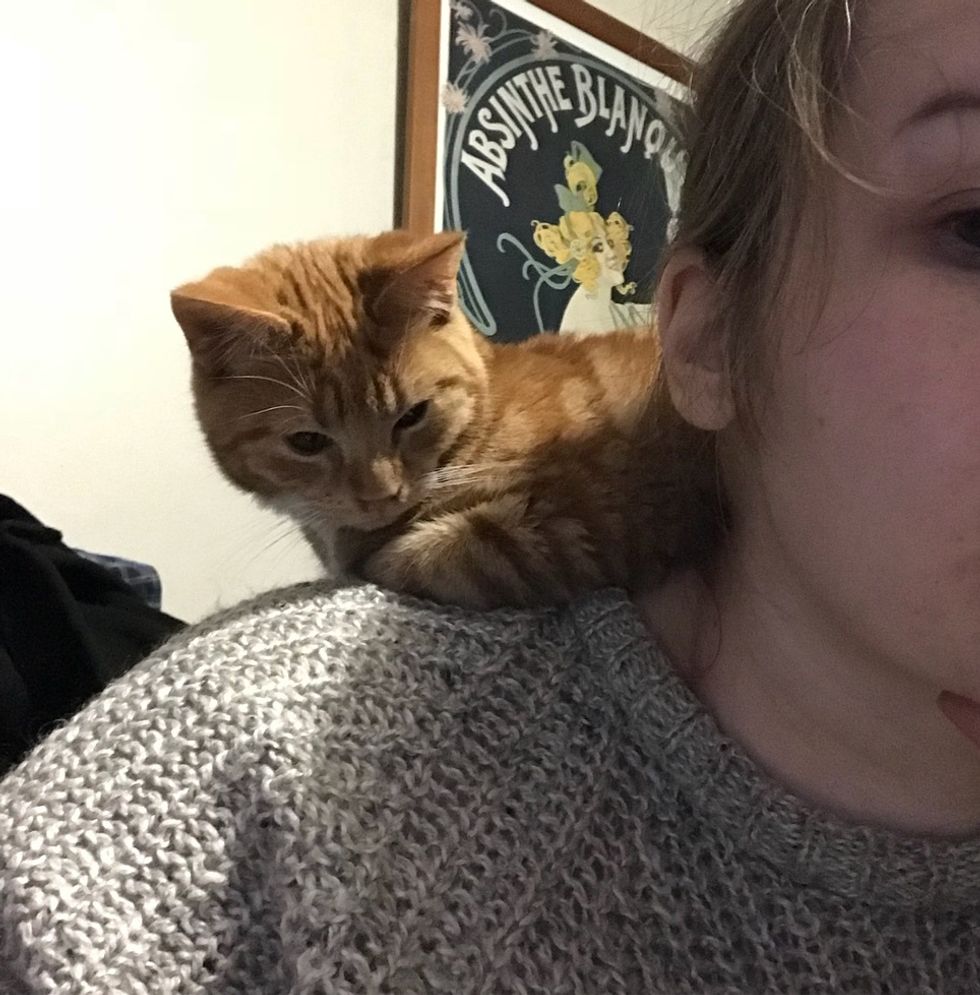 The little ginger boy follows his humans around the house, showering them with cuddles and purrs. 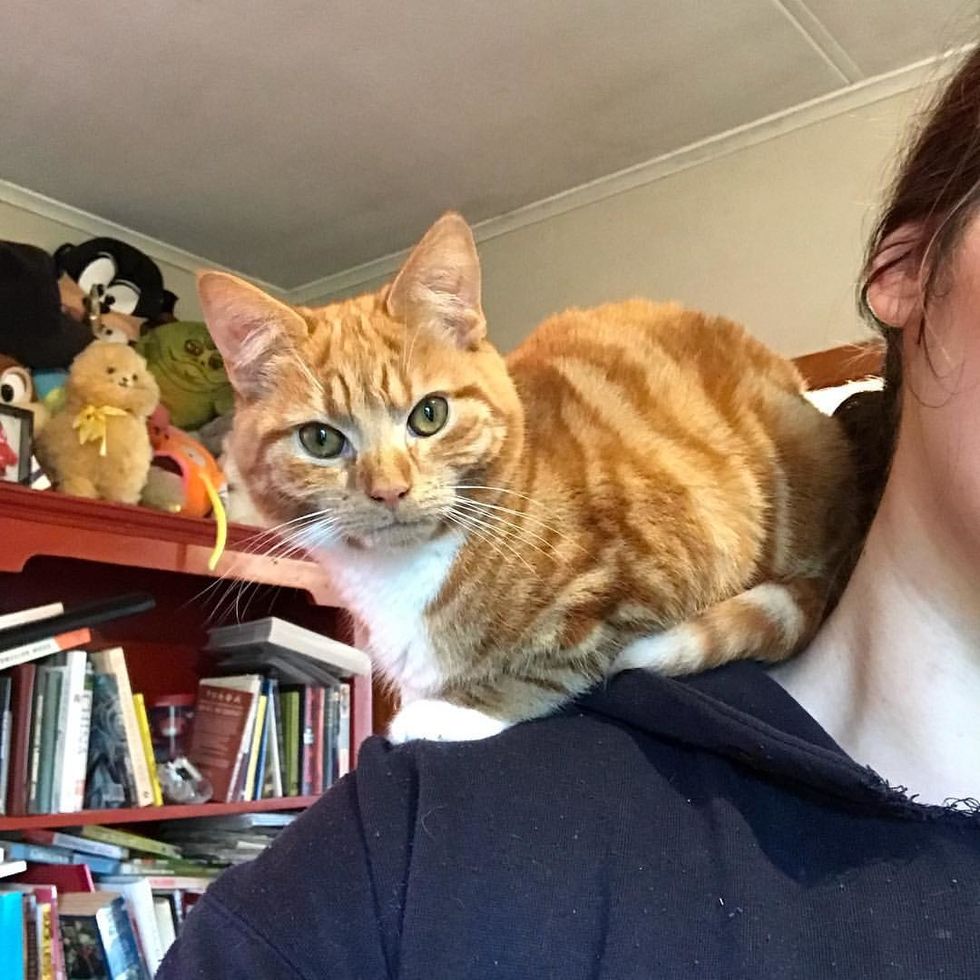 Related story: Tiny Kitten Brought To Store in Tissue Box Gets Her Life Turned Around With Love