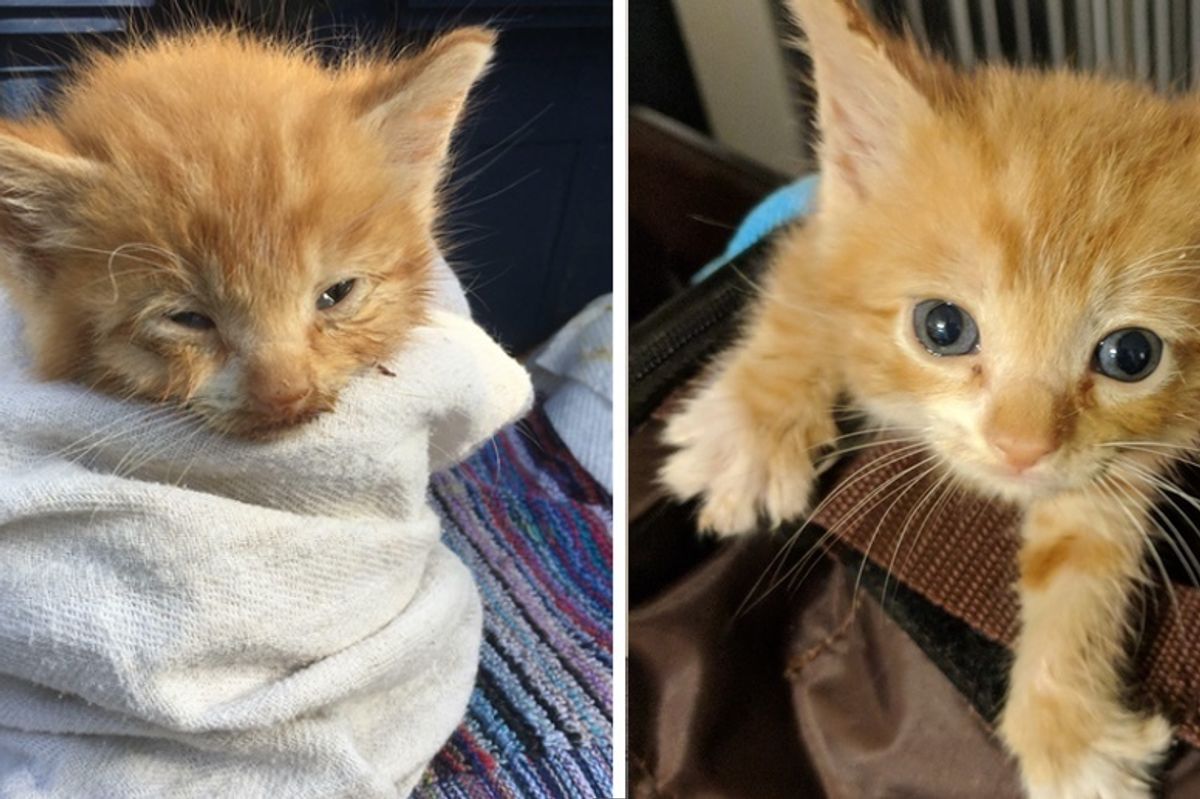 Kitten Who Lived on a Roof, Finds Love and Can't Stop Purring

A little 4-week-old kitten named Bennett and his two siblings were found living on someone's roof in a Los Angeles neighborhood.

The homeowner didn't want them to be there any longer, so the kittens ran towards a tree in the next door neighbor's yard to take refuge. 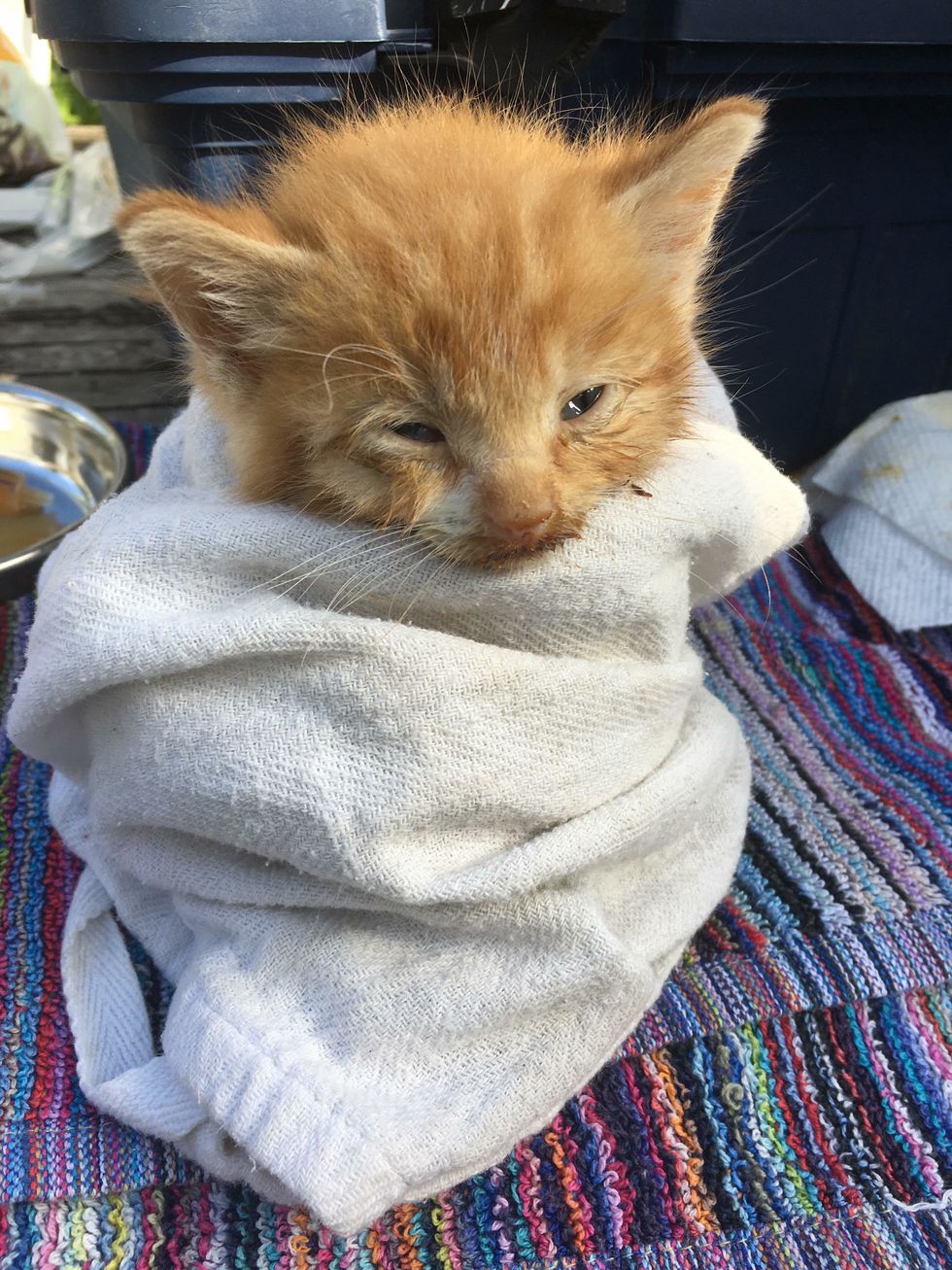 The neighbor next door rushed to help the kittens who were stuck in the tree. "She took the kittens down but missed Bennett. She later found him on her car," Jacqueline DeAmor told Love Meow.

The ginger boy must have fallen from the tree. He was very weak and congested. The lady brought the kittens inside and tried to feed them but little Bennett refused to eat, and soon he started fading.

She reached out to a local animal rescuer, Maryann, who then contacted Jacqueline, co-founder of Friends for Life RescueNetwork, and asked if she could help him.

"I said, 'Of course!' Maryann reached out to me as she knows these types of cases are my speciality," Jacqueline said. "Bennett was cold, weak, malnourished, and very very congested. His eyes were barely able to open and his nose was totally blocked with discharge." 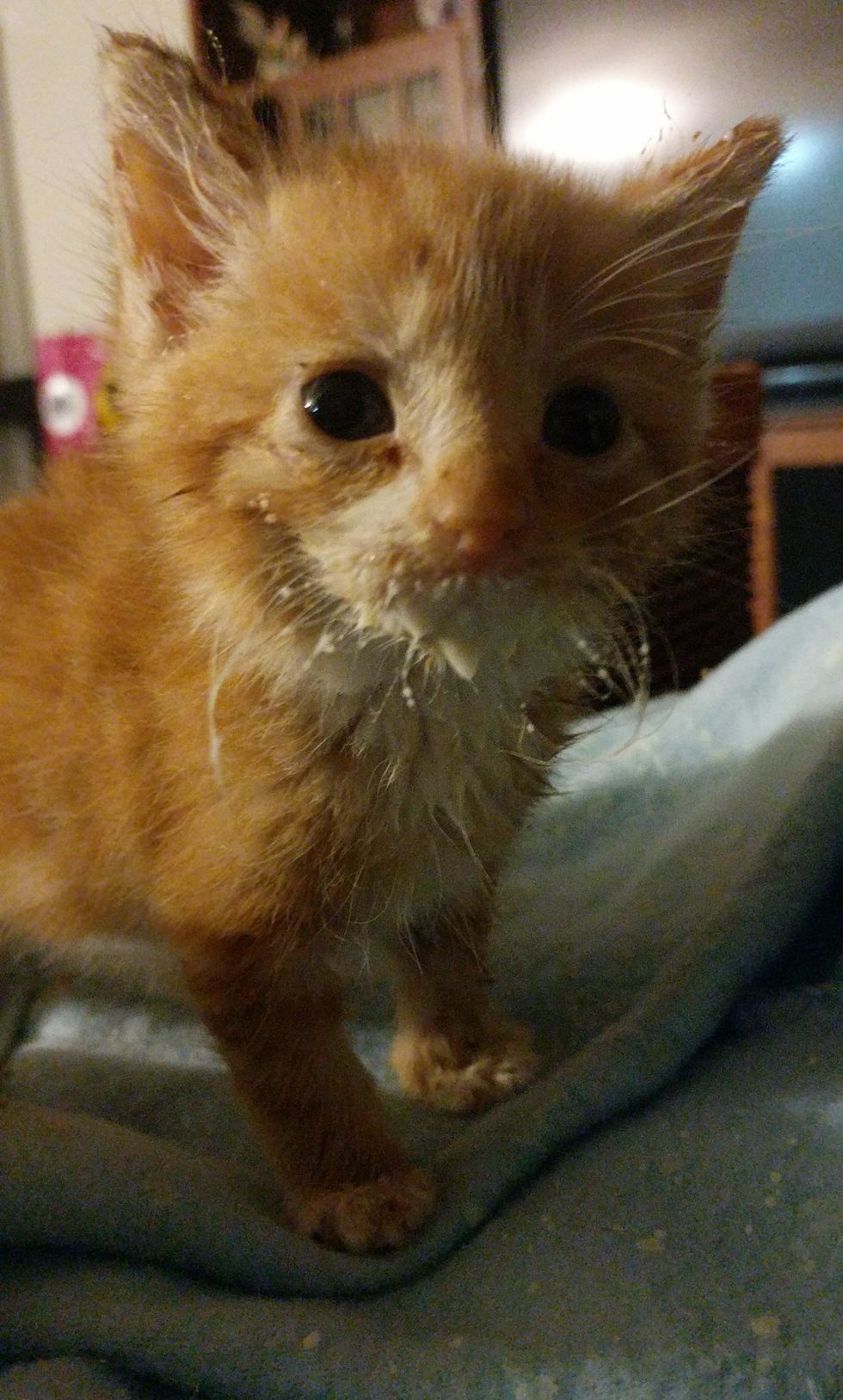 Jacqueline immediately started him on a nutritionally rich diet, so the kitten could begin to build up his strength. She used a syringe to help him eat as the kitten showed no interest in food. The ginger boy was also given oral antibiotics to fight a severe upper respiratory infection.

After two days of round-the-clock feedings and tireless efforts, the kitten finally perked up. "I knew he'd be okay when his nose started clearing up and he became a voracious eater," Jacqueline told Love Meow. 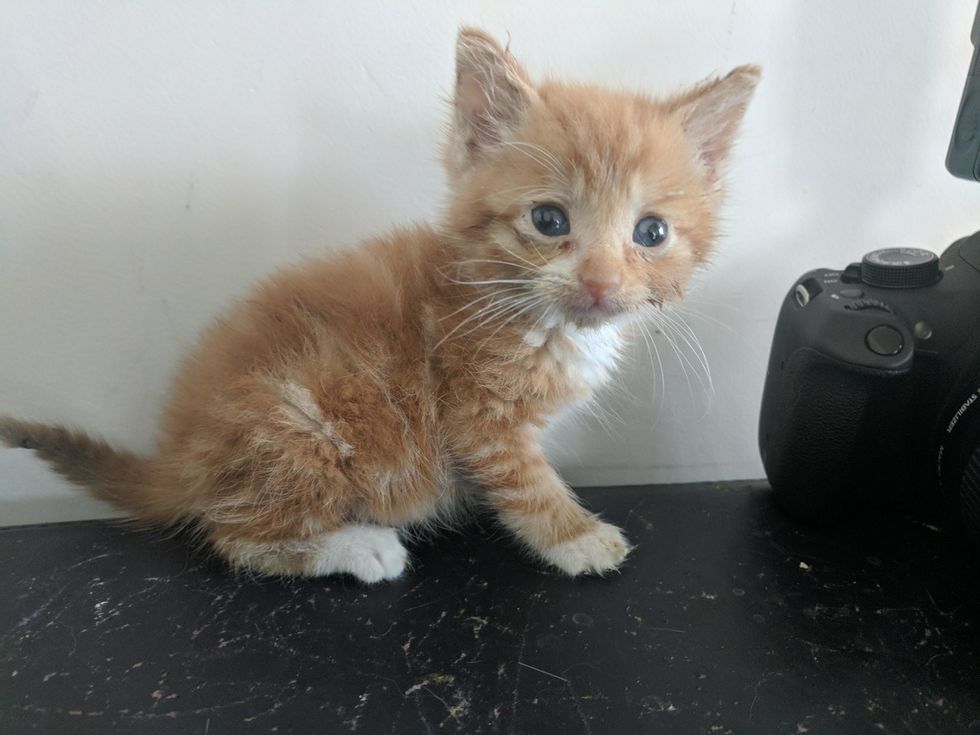 When Bennett was strong enough to stand up on all fours, he was eager to play and be a kitten again. (Scroll down for video)

"He makes the cutest little chirps when he's hungry and he started to play with a little toy. His body temperature was 97 degrees when he arrived and he's now a healthy 100.2 degrees (37.9 C)." 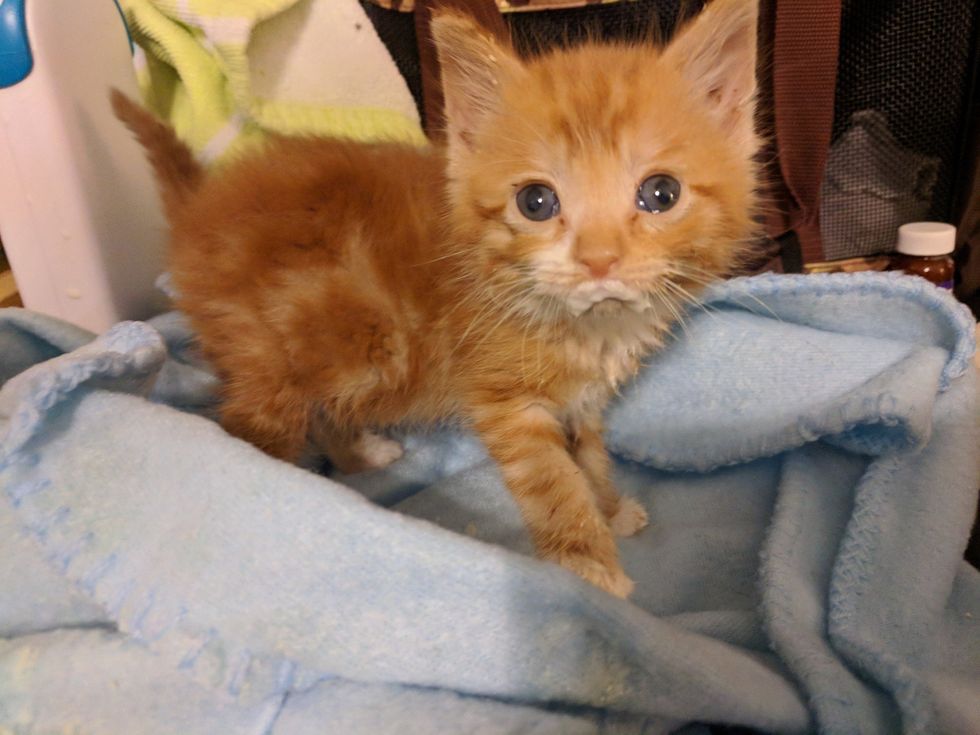 Jacqueline plans to return to the neighborhood to find the mama cat through TNR (trap-neuter-return). The other two kittens are being cared for by the kind neighbor.

Little Bennett who was found in poor shape, has made a complete 180. 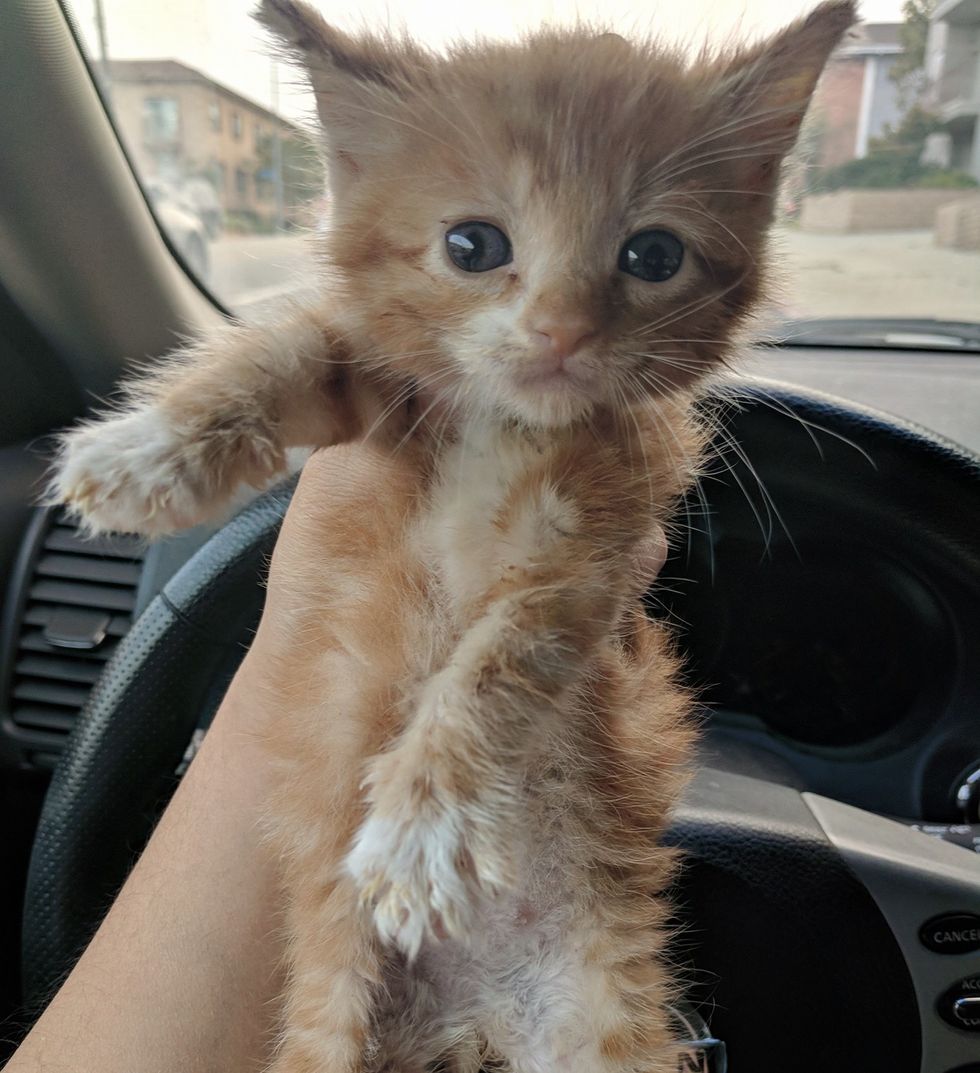 Just yesterday, he discovered his purr motor. "He purrs as soon as I pick him up and snuggles right in my neck. He loves to run around his little play area with his tail all poofed out," Jacqueline added.

Bennett has become a little purr machine and even learned to communicate with his foster mom with his tiny meows. "He would squeak at me from his heating pad when he was hungry." 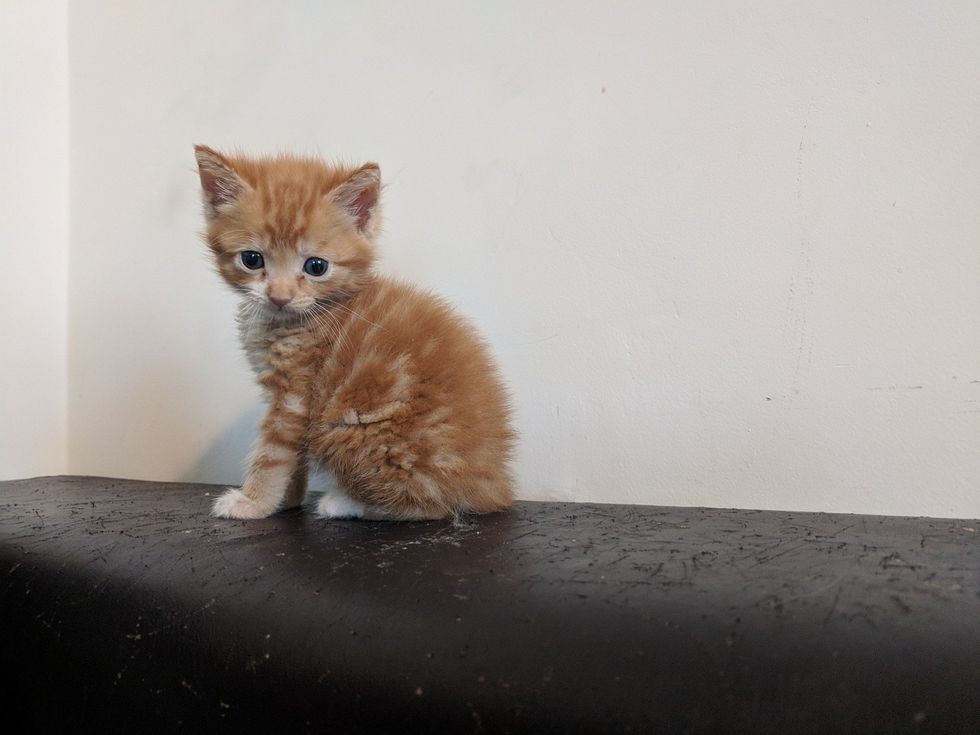 Just five days ago, the ginger boy was miserable and could barely breathe. Now he's a playful, curious little guy full of adventurous ideas and is fearless with bigger kitties.

He meows for his bottle with eagerness and will purr up a storm after every meal before drifting off to sleep in his foster mom's arms. 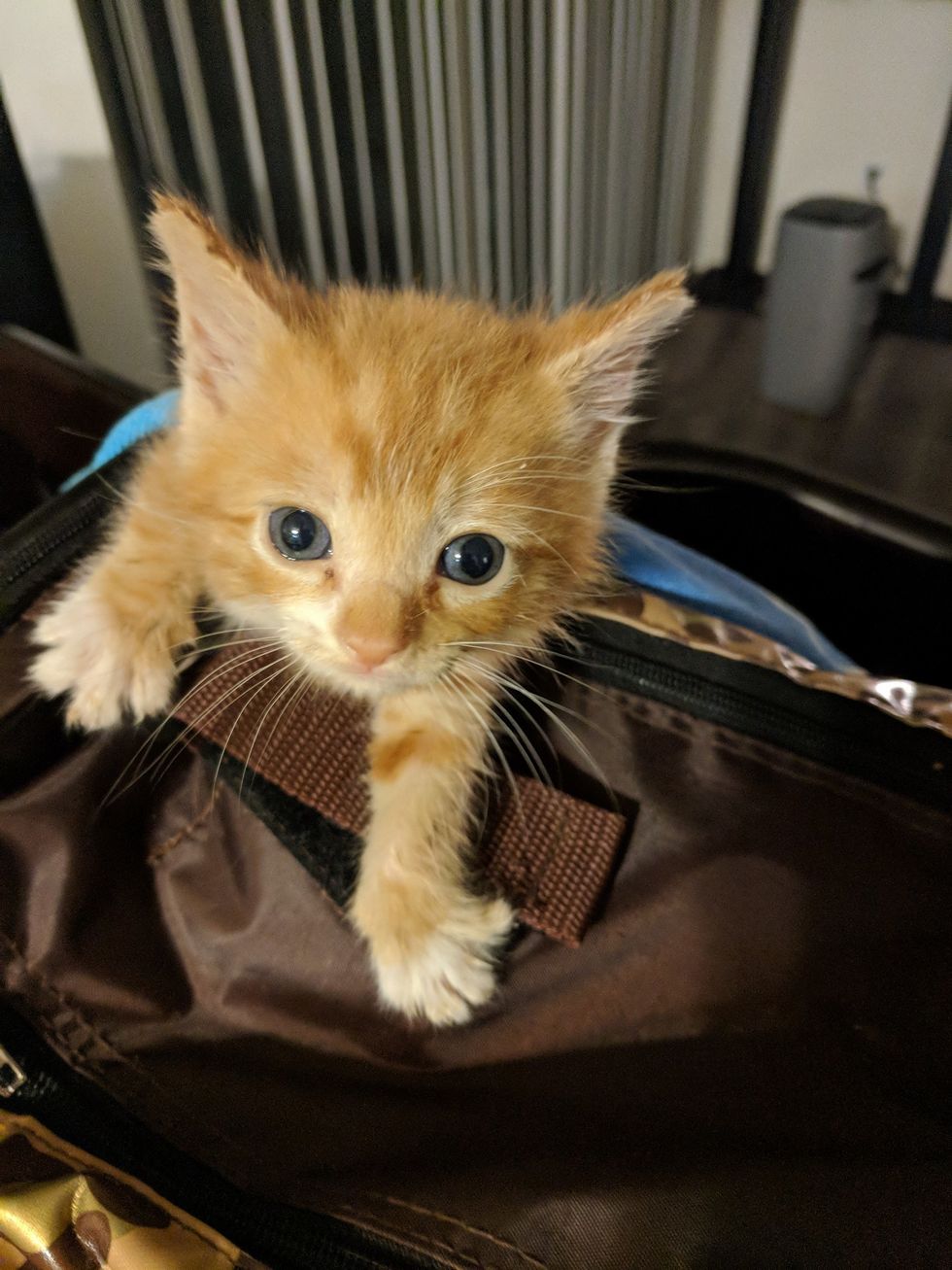